Is no one else concerned about the rising water temperatures while kayaking?

This has been on my mind for a couple of years. Although there are reams of info on kayaking in cold water, I cannot find much on rising water temperatures. I live in east central Illinois. It is not the hottest place in the U.S., but it has a fair amount of hot and humid days (over 95 and extreme humidity giving a ‘realfeel’ of +105 F) that are increasing. What I’ve noticed (I kayak solo at the crack of dawn) are rising water temperatures, coinciding with higher lows in the early mornings. Here we have rivers and lakes. I kayak a lot on the central CA coast, so I notice the hot water here in IL; and in the morning now the water is warmer than the air (e.g. a spring fed lake I kayaked on yesterday had an air temperature of 72 and a surface water temperature of 84 at 7 am). So I’ve included a USGA image of another nearby lake and yes, it’s getting up to 90F! So I want to know what the conditions are that promote various amoeba/bacteria/viruses, etc. in warm water (I do avoid geese infested waters). Just like I don’t kayak on flooded, chocolate rivers, or below 30F or during a thunderstorm, I’m starting to stay at home because the water is not cooling much overnight. Am I being too cautious? I am having difficulties getting factual information about this. 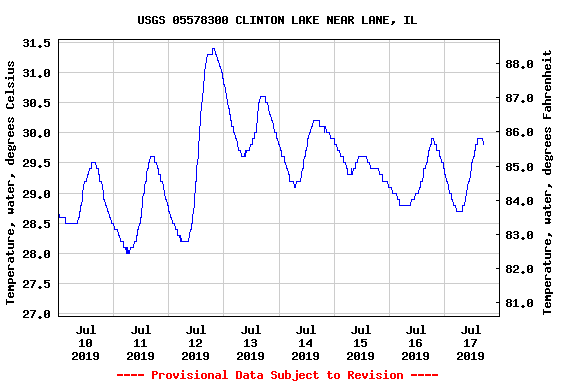 Good question. In my area sea temps are at 60 and water temps inland lakes are sometimes reaching 70… Algal blooms are non existent. I know that is not true for other areas.
Water has a high specific heat. It takes a lot of application of heat or cooling to change it much. Air temps have much wider fluctuations… This could work against you of course.

River temps behind my house are always 85-90 degrees this time of year.

I put my yak into LaDue Reservoir (in NE Ohio) the other day, and it was warm–like bath water. A little cooler away from shore, but I’m also concerned that parts of this lake are becoming choked with algae and other growth.

This has happened before, but I think it may be getting worse.

All I can contribute to this is… The worst sinus infection of my life was after rolling on the local lake. I don’t remember how warm or cold the water was but the lesson I took from it was: Use nose plugs and breathe OUT as I roll in the lake.

To answer your question; yes, I worry about cooties even before the water gets really warm if I’m going to get IN the water. If I’m staying in my boat and above the surface I don’t feel like I’m at great risk by paddling in the really warm stuff.

Yes, I’m concerned in general about the changes in the weather.

The most shocking example of this I’ve seen was the coast of Maine last summer. The water off Port Clyde was warm enough to swim in. We were 4 miles offshore on an island, and several of our group went snorkeling in bathing suits. In the past, we’ve worn drysuits to go that far out, and a family member who grew up there said she’d never seen the water that warm.

If that continues, the local lobster fishery could be devastated if they move further north, as well as many other species of sea life.

Yes. Gulf of Maine is warming faster than any other US coastal body of water. An lot of very undesirable impacts.

That’s why new fisheries are emerging in Maine… Primarily dulse and oysters and scallops … I too am concerned but not for the same reasons the OP is.

The new brouhaha re lobster pits them vs right whales . Look for the price of that prized Reds Eats lobster roll to shoot up. Its already a tourist grab at $26. ( I can get two of them with fries and slaw at Dysarts for the same price)
https://www.timesrecord.com/articles/opinion/mills-defies-foolish-unsupported-and-ill-advised-regulations-on-maine-lobster-industry/

Seems like I’ve heard the rising temps are contributing to more algae blooms and flesh-eating bacteria–although it’s hard to say if this is just a media frenzy over-exposing it or if it’s legit. If it’s true, this would be a little concerning.

My mom-in-law sent this to me the other day. Not completely sure it’s relevant, but worth a read.

Some boiling points
rise up their trouble
to sunny surface
that shows not bubble
as submerged beneath
there’s ill seas cookin’
too Fahrenheit
too deep for lookin’
square in the eyes
of faceless fathoms
one cell away
unlocks its phantom.

Many years ago, the Pacific Ocean off the coast of the PNW got so warm that it drew throngs of people into the water. People were drowning and some might even have been consumed by flesh eating sharks. Warm water equals bad news.

@magooch said:
Many years ago, the Pacific Ocean off the coast of the PNW got so warm that it drew throngs of people into the water. People were drowning and some might even have been consumed by flesh eating sharks. Warm water equals bad news.

That sounds like a good thing for climate change. Human population reduction isn’t a bad thing.