Is there a hand signal to ask a ship, have you seen me?

Hello, in absence of vhf, is there a (hand?) signal a kayaker can make to a vessel (picture an approaching fast vessel like a catamaran on the horizon at position x, to ask it if the kayak was seen? 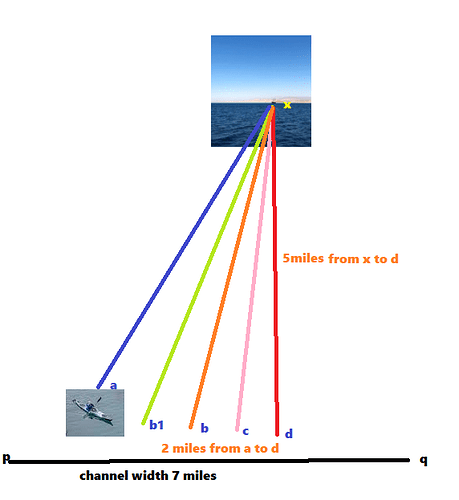 in this example, a 2knt kayak has committed to cross a channel and is already at b1 inside the perceived path of the 30knot catamaran which appears on its left on the horizon 5 miles out, the kayaker can decide to paddle like hell to move, but if the vessel makes the slightest course correction, the kayak will be inside again. at that distance it is quite hard to tell which path a,b1,b,c,d the vessel is heading.

if the vessel did get this signal, how would the vessel acknowledge ?
(e.g. a plane would waggle its wings, a car would flash its head lights )

Boats don’t use hand signals to contact each other. They use specific horn signals. If I were the kayak and concerned about an approaching vessel, I’d would sound five blasts, the danger signal. I carry a VHF and if in waters with commercial traffic, I’d definitely have a VHF. In that case, although not common, you could call a securite to announce you are crossing a channel. That doesn’t give you any particular right of way, just lets others know your intention and location. If for example you were in a VTS, you most definitely will not be the stand on vessel.

As above, VHF call is the proper marine signal. The boat may return the hail. No way a boat could see hand signals. Frankly, nor could they usually hear the blast of a horn until they were too close. But it is still better than waving at them.

At a certain distance, SOLAS tape on the paddle would flash and show movement on a sunny day.

But this is the world of kayaking on big water. The first decision is whether to try a channel crossing at this width or do the crossing where the crossing is narrower. I usually find the narrower spot.

While the Colregs require a proper lookout at all times, and most do, sadly not every boater does. So, while you are required to know and comport to your status as give way or stand on in a crossing situation, you also must be prepared for the other boater ignoring his/her obligation. You then have the duty to respond.

I personally wouldn’t be crossing in a small difficult to see boat in a spot with high speed boat traffic, especially where the Closest Point of Approach leaves little margin of error.

Check to see which VHF channels are used by large ships in your area. In the US it is usually 13. Yes they should also be monitoring 16 but not always. In the situation pictured by the OP I would turn around and wait for the ship to pass, as we did here: 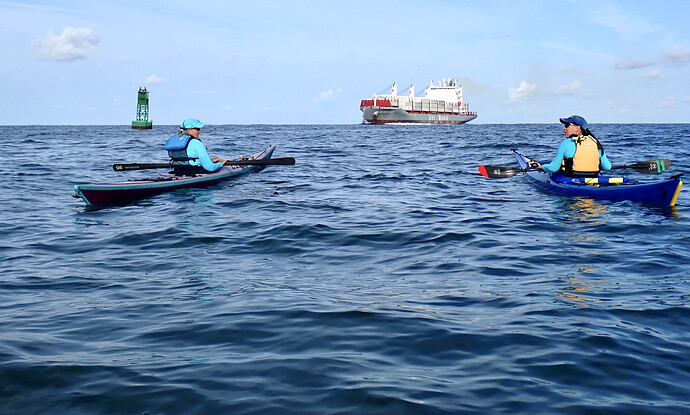 in the previous photo, lets say there was no green channel marker, how would you know how far back to paddle? or even if paddling back would bring you to a safer spot? if you refer to my diagram in the OP, moving back to point A is still potentially in the path of the vessel.

obviously , if you could see this profile, you would know you are safe (from collision, at least) 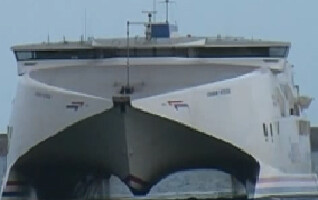 but what if this is all you could make out:

regards the horn idea, i have a disposable horn but i doubt the pilot inside would hear anything , the sound their craft makes is deafening.

if boats had yellow turn signals like cars, the ambiguity would be solved.
without this i guess i will have to trust that the guy at the wheel/radar of the vessel is paying attention (i guess we all employ trust, at some level, while driving)

If you’re going to be in that kind of traffic then you really need a radio. True, they won’t hear a horn from any distance until it’s too late.

The way to see if you’re on a collision course is to check the relative bearing. With a hand bearing compass take a bearing on the ship. Check a few minutes later with another bearing at the same spot on the ship. If the compass bearing doesn’t change, you are on a collision course. If it increases or decreases, the ship will pass safely. The more and faster it changes the better.

It’s amazing how fast even those cargo ships come up on you. 15-20 knots or more and it’s there faster than you think. Cat ferries can do 50. On our bigger boat we travel 6-7 knots. Even with radar and other electronic aids, I don’t cross the bow of a ship unless I’m more than five miles away. In a kayak, if you drop your paddle or capsize, ships cannot alter course much less stop very quickly. So you won’t even register as a speed bump to them. In addition, there is a blind spot in front of the bow of cargo ships that extends several hundred feet where no one on the bridge can see you.

Lots of strategies to reduce the issue, but no one that will fix everything

On plus side, a catamaran doing 30 knots is likely a professional, and I find they do better than private boats on monitoring VHF and maintaining lookouts. And the vessel is reasonably maneuverable (as opposed to a deep draft ship), so can adjust course easier even if they don’t see you until you are a few hundred yards away.

And some over the top fixes (not normally done and much more expensive than just getting a VHF) which work with vessels using AIS (any commercial vessel over 60 feet is required, and many shorter vessels do use)

On a kayak? Chartplotter, GPS antenna, AIS black box, its own dedicated GPS antenna and dedicated VHF antenna, battery to run it all. It’d be fun to see on a kayak, if not impractical.

Actually there are handheld VHF radios with a built in AIS receiver.

Generally the really big ships are always in a marked channel unless far offshore. In the picture I posted the ship would be quickly aground if they left the channel as it is too shallow - a loaded cargo ship draws upwards of 35 to 40 feet; standard depth of a dredged channel is 40 feet at low water. Within a few hundred yards of that channel marker it shoals to 6’.

It’s the smaller (but still large) boats that you need to watch out for. Taking a relative bearing as @RC51Mike suggested is the best way to see if you are on a collision course. Radio is very helpful if someone on the other boat is listening.

It can be scary. As a paddler and a sailor I have had scary experiences on both sides - I had a 210’ Coast Guard cutter sneak up on me while sailing as I had neglected to get up and really look under the sail for too long. I have seen paddlers while I am sailing and they are usually invisible until I am very close (ie too close). Most often I see a flash from the paddle blade catching the sun and that makes me look twice. 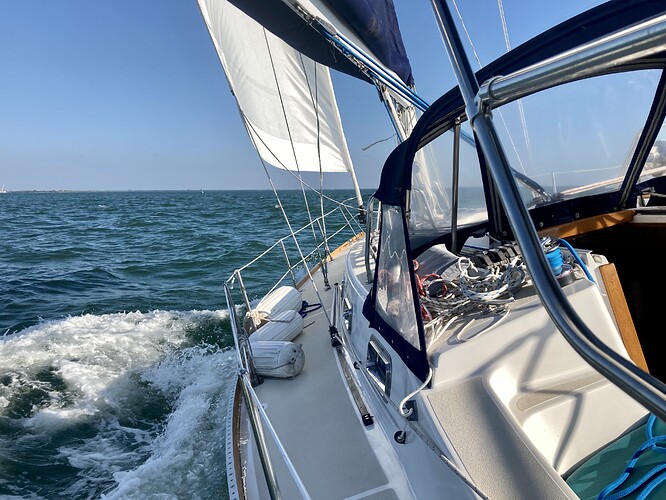 A kayak is visible for about a mile. Visibility diminishes to just paddle flashes as you get beyond one and a half miles. You can try paddling 150 strokes per minute to paddle clear. A large ship probably will see you, but their focus is on navigation, not how much damage a plastic boat will do to their hull - it’ll buff out. Vessels Contrained by Draft or Ability to Manuever are going to do what they do; they must remain within the boundaries of the channel. And they cannot stop and block an active channel

Learn the rules for Give-Way/Stand-On vessels. Make sure you’re intention to stand clear is known by deliberate action. Failure to do so can be reported to the USCG as a dangerous practuce by the ship watch. A kayak is visible for about one mile but that visibility diminishes within the next 1/2 mile to paddle flashes.

Many power boat friends tell me I have no business being out on open water, because they can’t see the kayak. I tell them a 12 inch by 20 foot log that has only 2 inches above water is far less visible than a 14 foot orange kayak.

When I started kayaking I often thought power boats were intentionally aiming for me, until I read a navigation book by David Burch. He explained how to guage convergence by turning toward the approaching craft (make sure you are aware of other boats around you when you change course) and track for a short distance to estimate the other crafts disposition. It usually takes 10 seconds, then bear off. I’ve heard new paddlers express concern about the practice. I do it myself and find it helpful. Agree on VHF. Military properties often have restrictions that are announced on VHF. I though it would nnounced on channel 16, but Aberdeen Police advised that because commercial waterman typically monitor 68, the announcements go over that channel.

thanks for all the info so far. especially on ranging/ angles. am looking at some radios from Amazon.

Just put your center finger up on both hands see if they react.