Is this story likely to be true? Swimmer in Lake Superior

I accepted this local story as true when I first read about it, but when I read this version, my gut says something is fishy. Several DAYS in Lake Superior? Today’s water temperature at Copper Harbor is 66.9°. I knew he was somewhere along the shore for a few days, but I assumed that meant stranded (it’s pretty well-forested and rugged). This sounds like it took days to get carried to Gull Island, and then he spent one day there before trying to swim to shore. Am I just being overly skeptical? Hate to disbelieve someone who has been through such an ordeal. 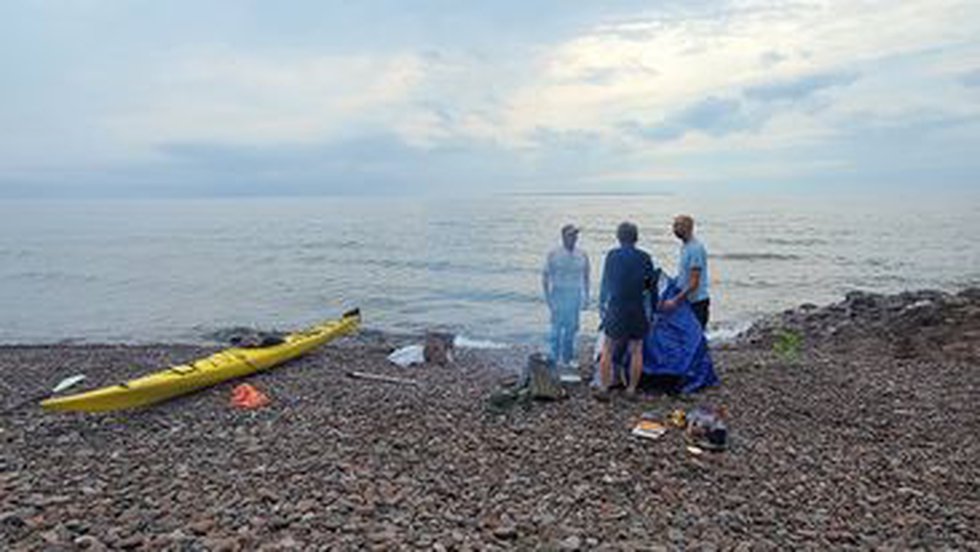 A man got lost in Lake Superior and was dragged by currents all the way from Hebard Park to High Rock Point.

Difficult to believe he was floating in Lake Superior for that amount of time.

The description on the facebook page of the guy who found him makes it sound pretty different from that article. It sounds like he got pulled by the current from Hebard Park to Gull Island (15 miles) – which the FB account says probably took 18 hours, but it may well have been less. Then he was on the island for a while, and then he swam 2.5 miles to shore. He definitely wasn’t in the water continuously for 5 days, and it’s possible much less than 5 days had elapsed since he first got in the water. All the information anyone has on this came out of the mouth of a guy who was hypothermic and exhausted, so the timeline is probably a little inaccurate.

But if he’s saying he was floating around out in Lake Superior for 18 hours; I’m calling B S !

If I wanted to swim in 67 degree water I’d have on a wet suit. Was he wearing one?

I wondered the same but haven’t been able to find any info. Also wondered about a PFD.

No idea. I haven’t been able to find anything. Even if he was, he’d have to be an incredible swimmer to survive for the supposed 4 days in the waves. I’m really hoping more information comes out later. He was awfully fortunate to have been rescued before the wind we’ve had the last few days!

We also have had other water-related incidents lately. Kayaker near Marquette a week or so ago. They found his capsized boat, then his body several days later. Just found a body in the Portage Canal a couple days ago. Also, a couple very wet, very cold people were rescued from an island somewhere off from Copper Harbor recently - something about an inflatable craft. Raft? Kayak? Flamingo? I don’t know what. But it was too rough for the closest rescue unit to retrieve them - the sheriff’s dept had to go out with their special rescue jet ski.

As learned here on P-Com-edy of recent:

There are Coopers of barrels
and Coopers of tales.
Some that hold water
while some vessels fail,
to traverse cold harbors,
or fall into reason,
stocking leather or fishy,
facts with some treason,
to our senses most native,
though they’re not there just yet,
and we’re all in need of a little rescue,
D. B. Cooper’s hasn’t found him yet

More on the story, this one from a FB hiking, backpacking and kayaking group:

"As always it was nice visiting the Keweenaw Peninsula and Copper Harbor. My friend Gary Katt and I had a great time rockhounding finding our usual stuff. Took some amazing drone video and pics that I still need to go through. Although this trip was unlike any we have ever taken before. I have a miracle of a story to share with you that happened Monday 8-9-21.

"Gary and i were camping at High Rock Bay at the tip of the Keweenaw Peninsula Saturday and Sunday night. Sunday the weather was pretty rough and weren’t able to get out kayaking so we drove around and went exploring. We got into cell reception and looked at the weather and showed the wind was going to change and we would be able to go kayaking Monday morning. We met a wonderful family camping at the point Sunday and were talking about rocks with them. Monday morning comes and Gary and I were getting our kayaks ready by the beach about 8:30am. We looked up and saw Josh Bennett our new friend coming running down the beach to us telling us someone was out in Lake Superior yelling to get an ambulance. Gary ran to the point where they were camping to see what was going on and to swim out. I had my kayak ready to go and headed out into the lake not knowing what to expect thinking the worst thing possible. As I’m getting closer I see a head sticking out of the water of a man floating with a gazing confusing look on his face. The only thing he was wearing was his swimsuit. I told him to hold onto my kayak and i would get him to shore. I asked if his boat sank and if anyone else was with him. He said no and that he was alone and no boat. I said where did you come from and he said that it was a long story. He had been out missing for 5 days since last Wednesday August 4th. He said he didn’t know where he was but Wednesday night he went out for a swim 4 miles west of Copper Harbor at a park called Hebard Park. The current took him away from the beach and he couldn’t get back to shore. He figured he was adrift for about 18 hours when he ended up on Gull Island at the lighthouse. He was confused and didn’t remember seeing Copper Harbor lighthouse. I cant even imagine what he must have overcome when he got there or how he was able to warm up. He said the lighthouse was locked so he spent 1 day outside waiting for help. He was yelling for help at passing by boats that were further out but no one could see or hear him. After a day he was able to break the lock on the door and gain access inside for shelter and see if there was anything he could use. After many days of being out there he didn’t have much hope for rescue. There was a log book he signed his name and told his story and apologized for breaking the lock on the door. He told me that there was an EMR food meal he ate on Sunday night. When the winds shifted back towards the point and the waves calmed down he decided to get back into the lake in the dark morning and try to make it across to the point. That’s when Josh saw him out off shore and I met up with him in the kayak. Gary swam out and met us to see what was going on. He swam back to shore and let everyone know. They found someone with a motorcycle to head back towards Copper Harbor for help. He ended up running into a Michigan state police radio engineer who was out inspecting the road conditions that were going to the emergency responder communication towers. They were able to radio for the emergency response people from Copper Harbor to come out. The road conditions are very bad to get out to High Rock Bay and it takes about an hour to hour and a half for a 4 wheel drive vehicle. Once we arrived to the shore we were able to sit him on the rocks to rest and try to get him warm. Hypothermia was definitely setting in.There were 3 kids in their 20s trying to get a fire started on the beach, Josh’s wife was making hot coffee and water for him to start drinking and putting layers on him to warm him up. I ran back to camp to get my chair for him to sit in in front of the fire. It took all of us to lift him up and walk him up to the fire. The rocks were hard to walk on. He is a big guy and took a lot of help as he had no energy. It took a while for his core to warm up and we could tell he was starting to feel better. It took about an hour and a half for the emergency response people to arrive with their Polaris Ranger and Snowbulance wheeled trailer. They were able to back it right down to him we all helped load him up for the long bumpy road to town. He was very appreciative for everyone who helped. The rescue team did an amazing job!

"He gave me his phone number so I can try to call him in a few days. Everyone involved played a key part to help him out. It’s been a few days now and still can’t believe what happened and how he survived being in the water that long 2 different times. The first time he was swept out he drifted 15 miles and what he remembers maybe 18 hours in Lake Superior. The second time was 2.5 miles. The water temperature was 63 degrees. It is an unbelievable miracle he survived being in Lake Superior for so long and how everything worked out. No one else could believe it themselves and think we are all a bit in shock what happened and how he survived. Out of respect for him I will not be releasing his name unless I talk to him and wants to tell his story. If there’s anything to take away from this you should always respect the water and what it’s capable of doing and let someone know what your doing. I pray for him and his recovery. Today 8-11 is his Birthday and im sure he has a lot to be thankful for and new outlook on life.

“I called him today and was able to talk with him for a little bit. He is still in the hospital recovering. He is still in a bit of pain from being in the cold water for so long. He wanted to thank everyone who was involved in his rescue! I wished him happy birthday and he had a little chuckle that I remembered. Thank you once again for all the kind words and continued prayers for his recovery.”