I've run into a Blackhawk tandem that I can't identify.

Greetings paddlers! It has been some years since I’ve posted here (all the way back in the .net days) but you’ve always been THE source of great info, so here goes: I’ve begun a search for my next winter-time canoe restoration project. The very first boat I looked at is one I can’t identify. I’m familiar with many, perhaps most, of the Blackhawks, but this one is a big tandem, something I must have missed along the way. It is 17’ 9" long with a 36" beam (at the gunwales, so about 34" w/o.) It has “access port” flotation tanks. This one is fiberglass, about 75 lbs, and has been repaired (a good job, too) in the place where I believe the serial number would be, so that’s not going to help us. It has all the look of a Siggelkow boat, with his favored shallow V hull. I know Pat Moore did a couple of Blackhawk designs, but, to my eye at least, it doesn’t look like a Moore boat. This is easily the biggest (in every dimension!) Blackhawk canoe I’ve ever seen, but I’m lost and even the magic of Google doesn’t help. So, got a guess? Thanks, as always.

What did you run into it with? How much damage resulted?

Do you have any photos; they’d be somewhat helpful.
How do you know it’s a Blackhawk, if the area of the serial number was damaged & repaired? Does it have any Blackhawk labels attached?

Based on what information. you provided; I think the boat in question could be either a Blackhawk Phantom, or a Watersmeet. But your measurements & boat weight do not match either models measurement & weight noted in a vintage Blackhawk brochure.

Both of those canoes in standard version came with a contoured portage yoke.
The silver layup was a blend of E & S glass cloth in four weights & weaves.
Those models were not mass produced, and are seldom seen

Bob…Much thanks; I was hoping you would see this and respond. Yes, I should have mentioned that it has original Blackhawk logos, and you can see a lot of typical Blackhawk characteristics in the build. The length definitely makes it a Phantom (it was a touch over 17" 9" so we’ll round that to 10! The original yoke is gone and the weight is a guesstimate, so close enough. If I decide to buy it, I’ll post some before and after shots. Most of the wood needs to go and lots of elbow grease needed…perfect for a winter project.

Sparky 961…It isn’t my boat yet, but the owner told me it was “dropped on its nose while attempting to hang it from some rafters!” The only other cracks (also repaired very well) were “caused by my mother when she sat on the boat while it sat upside down.” Can’t trust those mothers!

Before & after photos would be great!

A joke that needs explanation didn’t work. My comment was in reply to the title. Maybe it’s a slight regional difference, like calling an automobile collision an “accident” vs. a “wreck”.

@Sparky961 said:
A joke that needs explanation didn’t work. My comment was in reply to the title. Maybe it’s a slight regional difference, like calling an automobile collision an “accident” vs. a “wreck”.

Neither. In EMS reports we had to call it a crash.

I’d like to hear your comments after you paddle it. According to the specs the waterline width is 27 inches which is SKINNY for a tandem! However specs are not standardized so may mean little. I’ve paddled a Watersmeet and it was kind of a family boat, quite efficient at low speeds with little effort but not wanting to be pushed hard. Based on specs Phantom should be a rocket. 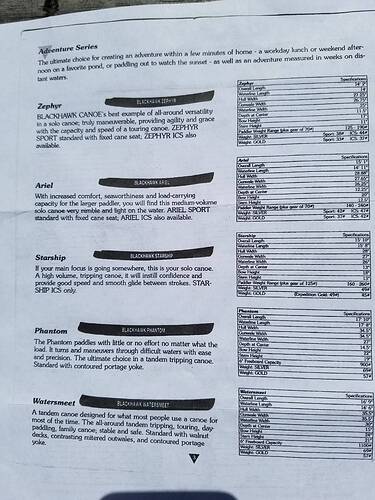 Thank you, TomL, this is more excellent information. And I suspect that the 27" is correct. If I do pick it up, it will be next spring until it is ready to put it in the water.

As to Sparky961 and Kayamedic, let’s say that, by “accident,” I “ran into” a “wreck” of a Blackhawk that has certainly been in a “crash!”

@mckennaroad said:
As to Sparky961 and Kayamedic, let’s say that, by “accident,” I “ran into” a “wreck” of a Blackhawk that has certainly been in a “crash!”

because you will have avid test paddlers at your house!

One thing you might want to look at for a certain ID on the “adventure series” Blackhawks are the deck plates. On the Phantom they are “stepped” down to a point. (The Zephyr 's are round, the Starship is pointed, the Ariel is arched.)

For many years I housed a Phantom for a friend and paddled it often enough. It is a great boat, paddles swiftly and easily. I’d love to have one myself. But, like all the other Blackhawks I’ve paddled, its not exactly a racer. Its a very efficient cruiser.

@kayamedic said:
because you will have avid test paddlers at your house!

Um, could be. He lives only about a mile from me. But actually I was mainly curious to hear how he likes it.

So, I lost out on the Blackhawk Phantom (totally my fault.) This winter my restoration project will be an MRC Sundance in Kevlar Hybrid layup. I did, however, discover what appeared to be a near perfect Blackhawk Phantom at Carl’s Paddlin’ in Lone Rock, WI. As we looked it over, I mentioned that, with its deep V hull, it looked like a boat that beginners would certainly think was “tippy.” Carl’s perfect response was, “Yeah, but think of what a GREAT boat it would be for polling!” And, as usual, he was right!