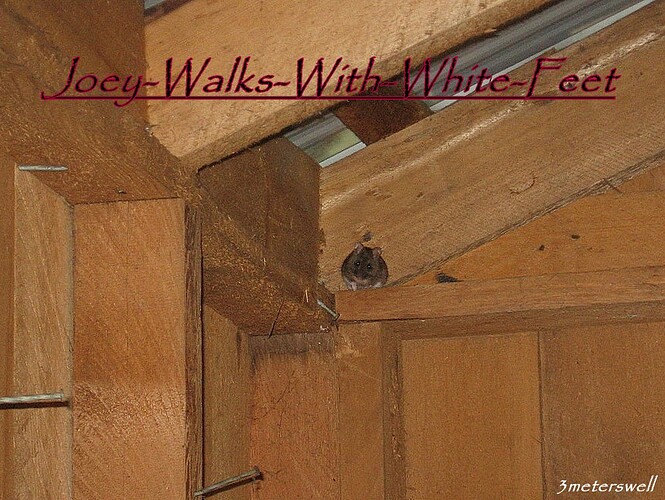 A significant storm approached as we were exiting Gale Passage. Gale bisects the Bardswell Group and opens into Thompson Bay which faces south into the open Pacific. If you were to continue south from Thompson Bay your first landfall would be Antarctica. That is a hard-to-comprehend amount of fetch and while this storm wasn’t being driven by some historic low-pressure system that movies are made of it was big enough to get every sea-going vessel’s attention and it was going to make Thompson Bay an unfriendly environment to the extreme. There may have been good places to hide from a storm in the bay but they were hiding from us and were not marked on our charts with the exception of Cree Point and Islet 48 which lay another 3 NM upwind from Cree. Dave and I had previously stayed at the Heiltsuk cabin on Quinoot Point located 2 NM in the wrong direction and downwind from Cree. We viewed it as our last resort option. We thought that, if need be, we could probably slip through the backdoor route between Dufferin and Potts Islands that is blocked at low tides and requires a slippery and ankle breaking portage. 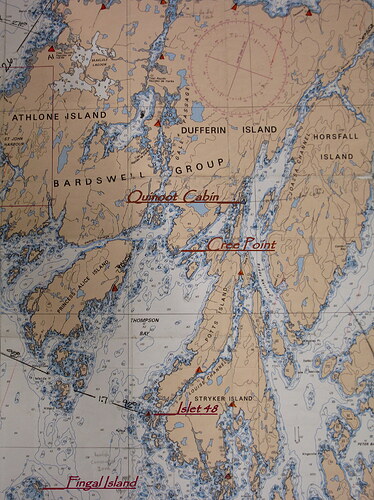 Cree Point is the southernmost tip of Dufferin Island which lies deep in the north end of Thompson Bay and seemed like the obvious choice so we tucked around the point to the left and into its sheltered lee. We found the campsite sitting high above on a rocky bluff where the ragged trees showed the ravages of life on a windy point. Our expectations of having any natural shelter from the building wind and forecasted heavy rain to be wildly optimistic and dismissed outright.

Our attentions turned to Islet 48 which defines the southeastern-most extremity of Thompson Bay. Here the bay is over a mile and a half wide and would be right in the teeth of the fun and games. We had never been there before and didn’t know if it would provide treats or terror. Would the juice would be worth the squeeze in a serious blow? Islet 48 was about an hour of exposed paddling in the best conditions. This building wind would lengthen that exposure.

We weighed the risks of an exposed run to Islet 48 and its uncertain shelter with Cree Point’s guarantee of misery against the luxury of another night in a Heiltsuk cabin that lay less than 2 NM to the north. We knew that we had enough time to reach it before things got sketchy so the Heiltsuk cabin on Quinoot Point won hands down. We paddled for 40 minutes to reach shelter on the last reasonable water that we would see for 24 hours. 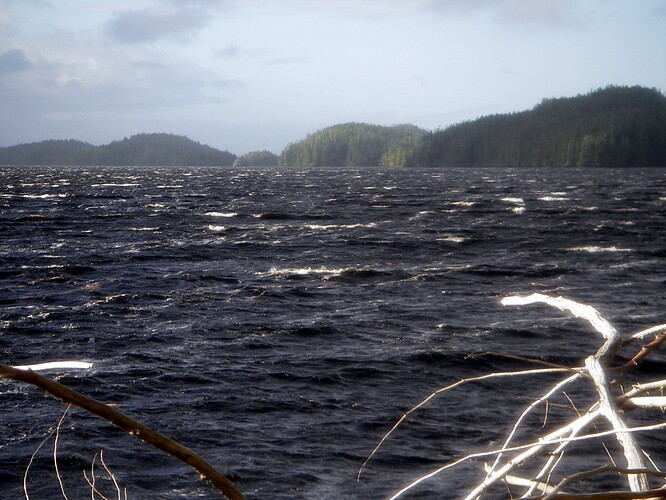 When Dave and I stayed at Quinoot in 2005 there was a cabin mouse that lived under one of the bunks. He woke me up making quite a ruckus while cleaning up food scraps and licking the burner of the stove scrupulously clean. Seemed to me that he was a solid citizen performing a civic duty as he was doing our work for us but I have to admit to feeling a bit uncomfortable as my headlamp beam lit him up and he showed no concern for what threat I might pose. Indeed, he locked eyes with a look of contempt, then ignored me and went back to his business. Fast forward a couple of years and the cabin mouse had gained a name and some notoriety. The cabin log told of costly encounters with the caretaker, “Joey, the Mouse”. It made for entertaining reading and Dave and I felt that we knew this guy. 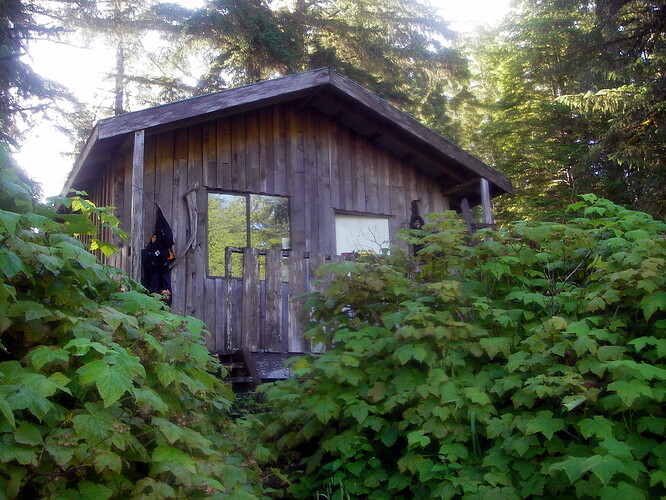 The fury of the storm pounding on the cabin drowned out my snoring and any sounds Joey may have made, however, we awoke to find that he had crapped in Greg’s bowl and had somehow deposited a single turd in his coffee cup. We laughed and marveled that this mouse had somehow entered Greg’s light weight coffee cup, pooped and exited without turning it over? He had also chewed through one of Greg’s drybags and gone large on chocolate Power Bars. Then, while Greg was seated in the outhouse the Rogue Rodent burst from beneath the box and passed between his feet like a brown RPG. It’s never a good thing to be startled when your pants are down around your ankles.

With that final insult, Greg challenged Joey to fair fight and the little bastard actually showed up. He swaggered out from the corner of the cabin like a gun fighter called into the street at high noon. Greg threw a few half-hearted broom-punches that Joey easily dodged and we all began to feel that this mouse was something other than a standard run of the mill cabin rodent and maybe should be left alone. 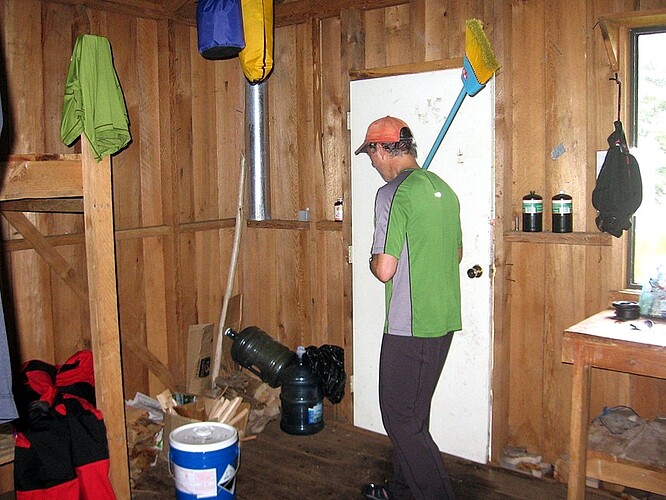 Perhaps he was a reincarnated Heiltsuk warrior who was pissed that he was now a mouse instead of a wolf, raven, bear, orca, eagle or something noble. Family crests have never featured rats or mice and his courage and demeanor certainly suggested that he had an axe to grind. While it’s usually a good thing when you are made to feel “special” this seemed to have morphed from “special” to vendetta. From counting coup to terrorism. Joey was saying to Greg that “you are dead to me”.

The image of a woman standing on a chair to escape a mouse is familiar to us all and here we were, three middle aged men, getting the hell out of Dodge in fear of some mouse possessed by the spirit of a Heiltsuk warrior. Yes, weather had improved but Dave and I were feeling like our luck would soon run out and Greg had realized that he was somehow marked and no match for Joey. Not a chair in sight so we were happy to flee the scene and leave Joey behind. 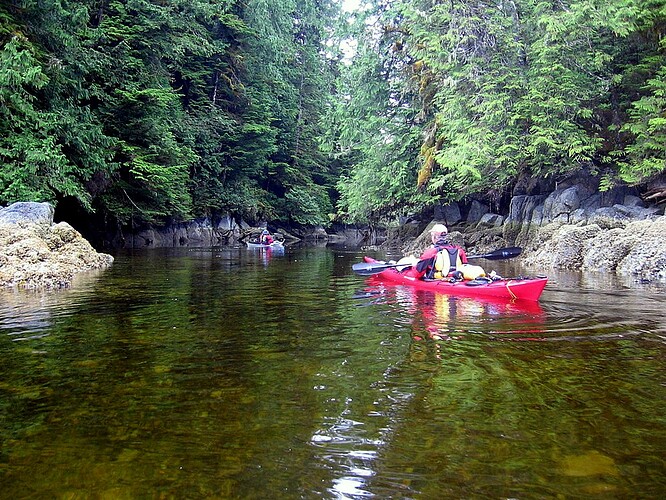 The most direct route from Quinoot Point south to the open waters of Queens Sound involves some narrow twists and turns through skinny passages complicated by tidal currents. We made short work of them and were soon feeling safe again from Joey’s threat. 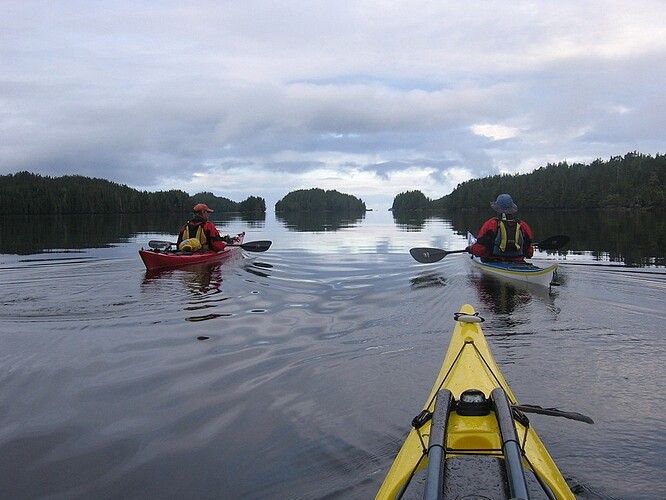 You’re such a wonderful story-teller, Jon! Your descriptions of Joey’s antics were hilarious. Great story, photos, and by using my iPad I was able to enlarge the map to get a better idea of the described locations. If those waters in the Joassa Channel were sheltered, must have been some real lumpy conditions on the outside.

Thanks for such a fun read!