Just came in from viewing Jupiter, four of its moons, and Saturn with its rings

Amazing sight in my small terrestrial telescope’s field of view at the same time. What a Spectacular sight to see the two gas giants and 4 moons in close proximity. Saturn was smaller and gives a perspective of being farther away as it truly is. What a wonder is the cosmos

I would have photos if I still had my original astronomical telescope. It was stolen many years ago.

Our viewing was amazing as well, and sounds similar to yours. It pays to have a really nice spotting scope for things other than birdwatching sometimes. Saturn’s rings were very cool to see. The best part of the viewing however was listening to my very space-oriented 6 year old son and his 7 year old cousin as they watched. “Awesome” indeed.

Last night was solid overcast. I think I caught a glimpse tonight through a break in the clouds, but I’m going to keep checking. It may yet clear a bit. Certainly I’ll catch it in the next few days before they get too far apart.

Amazing sight in my small terrestrial telescope’s field of view at the same time. What a Spectacular sight to see the two gas giants and 5 moons in close proximity. Saturn was smaller and gives a perspective of being farther away as it truly is. What a wonder is the cosmos

Which five moons did you see? What kind of telescope do you have? Normally, unless you have a very large telescope, only the four Galilean moons can be seen in amateur telescopes, Io, Europa, Callisto, and Ganymede. They are also visible in a good set of binoculars. Beyond those you need some very large specialized equipment.

Is it possible you were confusing a background star with #5? or did you see Titan, Saturn’s largest moon?

Saturn is smaller than Jupiter, and it is roughly twice the distance from earth, so no surprise that it looks farther away.

Congratulations on seeing the close conjunction, I was clouded out, but briefly between clouds I saw the distancing pair the next night.

Yes I saw the big 4 moons of Jupiter. Missed typed the 5 and didn’t catch it. Sorry about that. I’ll edit that now. Thanks for bring that to my attention. As for Saturn I didn’t see Titan though I have seen it in the past with a more powerful scope. In fact it may have been barely visible, but I didn’t notice it. What I found so impressive was knowing that Saturn was nearly twice as far and seeing both in the same field of view. It gave a perspective of depth and distance you don’t normally get through a telescope looking at the heavens. I find being out in the dark and seeing the planets gives it a reality that even the great photos don’t do in the same way. I could make out dimly a couple of bands on Jupiter, but none on the rings or Saturn. could easily see the gap between the rings and Saturn The scope I used isn’t expensive and lacks an equatorial mount so not really an astronomical scope. It was sufficient for enjoying the sight. it was a gift Here it is during the 2017 total eclipse it is a Celestron 70mm. Here is a photo of it during the 2017 eclipse. The eclipse photo was taken with a DSLR camera on a tripod you can also see a star. 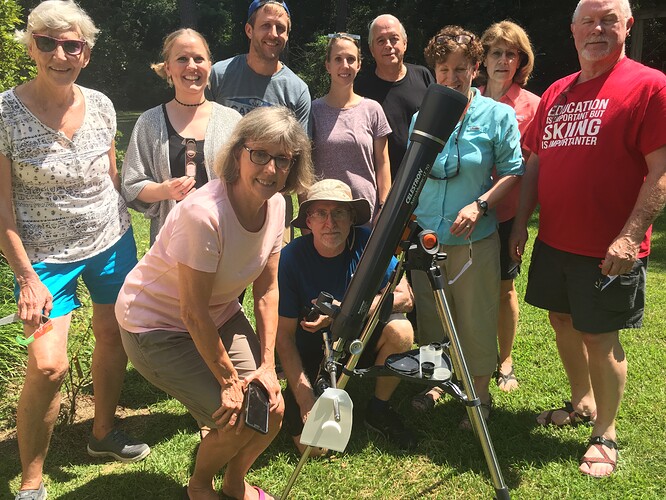 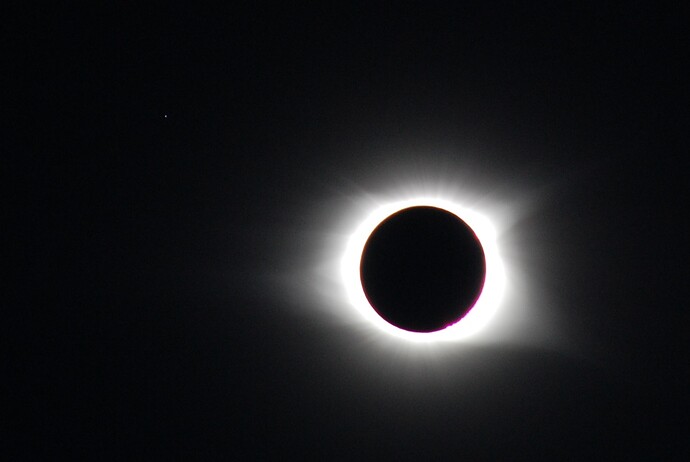 That “star” you photographed during the eclipse was probably Mercury, as it was in that relative position at the time. I was also on the centerline of totality with great views visually through a 6 inch telescope, but I was not set up to do direct photography. I learned on previous eclipses that it is better to enjoy the experience and not get tied up with trying to mess around with photography. Plenty of others did that. Yours looks great.

Mercury…Thanks for that info! I have slides of the1970 Eclipse here in SC too. I did spend time observing. Bracketed the exposures and took several shots is all. I loved the shadows through the tree leaves. 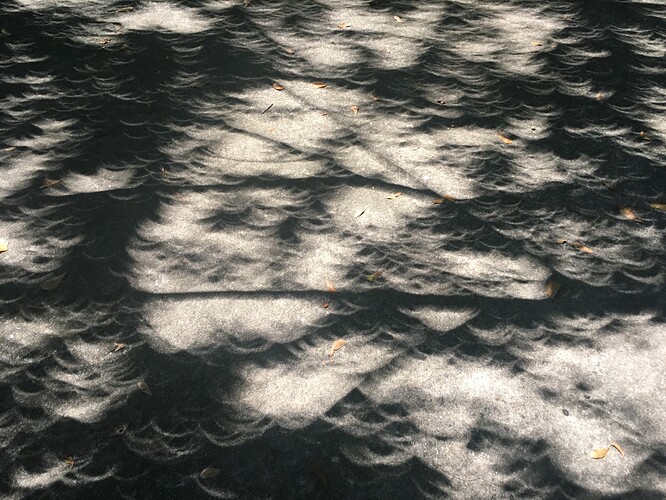 For the 1970 eclipse I was at the north end of the Chesapeake bridge/tunnel with a view of the oncoming shadow ominously racing toward me at 1000mph from the water from the SW. Something I will never forget and I did get a few photos through a 6" Criterion telescope.

Cool story! Would have loved to see that. I only had to drive about an hour to be in the path in 70. The 2017 went right over us .Hope to visit our daughter In Arkansas for the next one.

We always crossed to the Eastern Shore on the Bay Bridge to visit my Mom’s family. The year they finished the bridge-tunnel we crossed, and paid at the toll booth. My Dad was surprised at the cost, and asked if they needed his address. When told no he then asked "how will you know where to mail the dividend check? ". Got a laugh and was told they hadn’t heard that one.