This was July 2020. I guess this old gator was feeling territorial. I’ve canoed this river numerous times and you see them but never think about this happening. This was inland of Wilmington, NC and we do have some real big ones around here. Alligator attacks North Carolina kayaker - YouTube

Wow! That must have been quite a scare! Glad he was able to brace and recover as quick as he did!

The gator could have felt trapped and was trying to get under the boat. I’ve had that happen and the gator ran into the boat. It was a 3 footer.
But it’s spring and mammas of most species can get aggressive if they perceive a threat.

Yeah…um…you can keep those things down there.

I had a grey seal do that to me in a lake 2 years ago without the contact. It came up behind us and pushed a big wake of water. It sure got the blood pumping.

This was in June and late for mating. In a narrow river but it is the only time around here I have heard of one becoming defensive or aggressive depending on your view. I have zero tolerance for them. Dogs swimming in the river around here big chance. Just north one came out of the river and killed an elderly lady walking her dog. We have way too many and other areas of the country have way more…

I lived in Charlevoix, MI for 4 years. From what I remember the cold water was a lot more dangerous. But the rivers and canoes were made for each other. I had a blast there

Is the state doing anything for their population control after the attack on the elderly woman?

Just this year they issued tags to take about 100. When they were put on the endangered list it was a huge mistake. A couple of years later they admitted it but it was too late. Now we have them everywhere and heaven forbid if you touch one, even one thats hanging around your house. Sometimes you have to take matters in your own hand. They will do nothing if you kill every copperhead you see. That was another thing I loved about northern Michigan. I could walk through the woods and along the streams fly fishing without regard to anything. Wintertime you go snowmobiling, perfect

Nice recovery. People need to understand the current range of alligators so they know what to expect and not get surprised by them. Know the country you paddle in.

Over 50 years I go I did a day trip in the Everglades with a rented boat and outboard motor. It took longer than expected to return and we came in the last couple of miles in the dark. Gators were not common then but saw at least 50 pairs of red eyes with a flashlight. It was amazing and surprised all of us. Know your country so you do not get surprised.

My grandfather hunted gators in central Florida. They used dogs for bait to get the gators within shotgun range.
I paddled the Myakka once at low water and gators lined the banks. Most took off as soon as they saw us but there were a couple monsters who looked to me like they were deciding if we were crunchy on the outside with a soft middle.

Gators are still here on the Gulf Coast. You and I can laugh at the many folks who say “gators do not go in salt water”. It is always fun to paddle out to Cat, Ship, or Horn Island and see obvious gator tracks in the sand on the barrier islands 7 to 12 miles “offshore”. We chose our camping spots wisely.

Going gator watching is fun IF you see them first. I also choose to avoid the quiet, secluded waters such as the NC gator scare video from June thru October.

The danger with most gators is if humans have been feeding them as then they associate us with food. That is dangerous for both us and the gator as Fish & Wildlife will take out any nuisance gators (ones that continually approach people).

I was in a narrow channel in the Okefenokee with a friend up front. The banks were higher, eye level.

A six-footer jumped from our right, going left, right over our bow and in front of my buddy’s head. LOL

Oh, to have gotten that on vid! (It was long enough ago, kids, that all I had was something called a film camera with a shutter -ask your grandparents!)

We never saw him until he was airborne flying over our canoe.

Yeah. It got the adrenaline going. Of course, the old joke about not having to outswim the gator, and only outswimming my friend came about almost immediately.

You sure they weren’t crocodiles? Seen those in the Gulf in the Everglades. Gators in brackish to fresh.

here is a meal probably for the month. 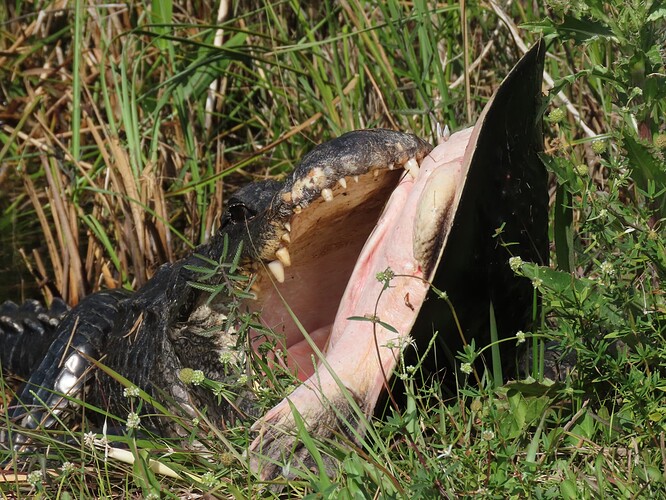 I had a beaver do that once.

Nearest croc is approximately 500 miles to the SE in a direct line from the MS Gulf Coast region which we are writing about.

Gators can occasionally be found in salt water from Texas to the Carolinas. Some are probably swept out on river flows so they make due and are an anomaly in highly salt environments.

However where barrier islands are present, salinity levels are slightly lower which gators seem to tolerate. My guess is they visit the barrier islands seeking better areas to feed. I’ve seen big gator tracks and smaller ones too which indicates breeding populations over the past 60+ years of visiting the local barrier islands.