Agree. How big can their choppers be. A mosquito has a needle. These suckered bite. I think it’s easy for them, because I just wear a t-shirt and in August it sticks like glue. When the wind is NE through SE, it seems they have to cover too much water. I don’t know if its the actual name, but I call them deer flies.

Because they have garden shears for jaws. For a few weeks in the summer I can’t walk out my road due to the little monsters. 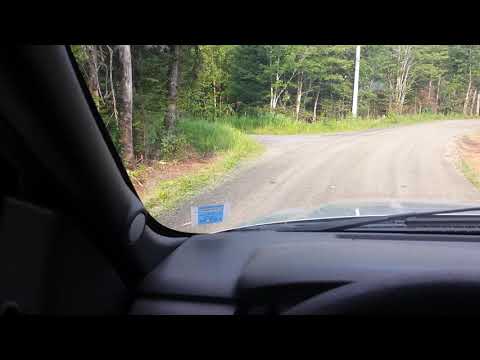 This is my video of what they get like.

OMG! Are they that thick everywhere or do they follow the car because they can smell you? That is horrific!

They are like that in areas where it is damp with overgrown vegetation. They swarm the mirrors. The black plastic is like a magnet for them. When you get out of the car or walk they target your head.

The more he drives the more he picks up along the way. They key on movement and dark colors. there are several and the names deer fly, yellow fly, green fly are common. Then on the beaches you can have ankle biters/stable flies.

Life in the South.

I didn’t see any mention yet of Naegleria fowleri and Vibrio on the list of scary water things.

I just find them fascinating… Crocs are supposed to be saltwater but there is a pond on Rabbit Key in the Everglades. Rumor years ago is there was a croc in it. I never went back far into the mangroves to check it out. Maybe it was a saltwater pond. Anyway Rabbit is a camping Key and once had marauding gangs of raccoons. Haven’t camped there in a few years but hear the racoon population has diminished because of pythons.

My question I don’t know the answer to; do crocs and gators eat pythons?

I find gator moms and their babies irresistable. 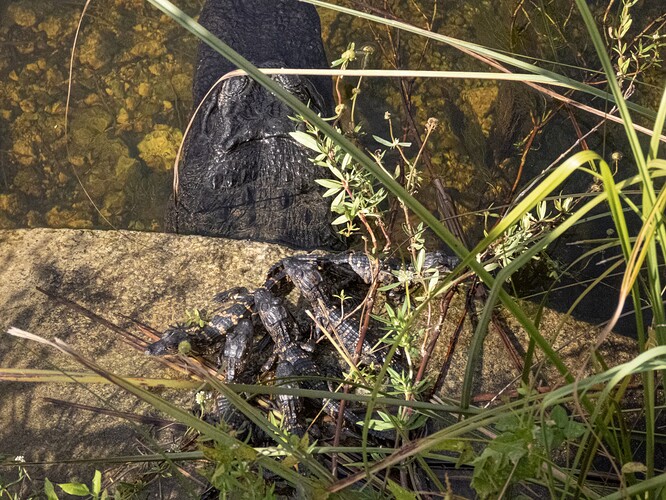 taken from a bike path… On the water seeing babies would be a reason to leave! That gator seems to be used to bicyclists.

In my experience there are three types of biting flies around the Chesapeake.

Least common is the stable fly, also known as the barn fly, biting house fly, dog fly , or power mower fly. it has four longitudinal stripes that run back from the head, an elongated mouthpiece, and clear wings. About the size and appearance of a normal house fly.

More common is the greenhead horse fly, also called the salt marsh greenhead, or simply the greenhead fly, The largest of the common biting flies in the Chesapeake region. Characterized by a large green body behind the eyes and clear wings.

Last is the deer fly. This is of intermediate size and is characterized by black spots or bands on the wings that are held at a 45° angle when at rest.

In all three it’s the female that bites and the bite can be very painful. They are persistent and can bite multiple times and seem to delight in biting you where you can’t see them, like on the backs or your shoulders, legs, and back. They can bite through a tee shirt or wicking poly shirt. They will follow you for some distance. After a drought, all of these flies can have a population explosion after a heavy rain. After such an event on St. Clements Island on the Chesapeake, they chased me off of the island where I stopped for a lunch break and followed me more than a quarter mile off shore. It took a while to get all of them out of the cockpit.

Deer flies are most common on land or right at the water and favor marshes, smaller streams, and wooded areas. Stable flies are more common inland in rural areas, especially around livestock. Greenhead flies are common is salt marshes and near the water. Once they find you, they will follow you offshore.

Common insect repellants only seem to deter about 10% of them. However when you are being attacked by 10,000 of them, this is a small comfort. On and near shore I’ve resorted to nylon pants, a splash jacket, and a hat. If you stay a bit offshore, flies are not really a problem.

A disturbing trend, is that blackflies are becoming more widespread. They breed exclusively in unpolluted fast running streams. Ironically, as streams are cleaned up, this is adding to the spread. Fortunately for us, the Chesapeake’s habitat is not suitable for the most part.

You described the critters exactly. Their breeding habits explain the appearance. Once on the water, they’re typically not a problem. Your experience on St Clement Island is what happened as I approached Poole Island. They followed me most of the way back to Dundee. Fortunately never have been plagued by mosquitoes on the Upper section, not even in the marshes. 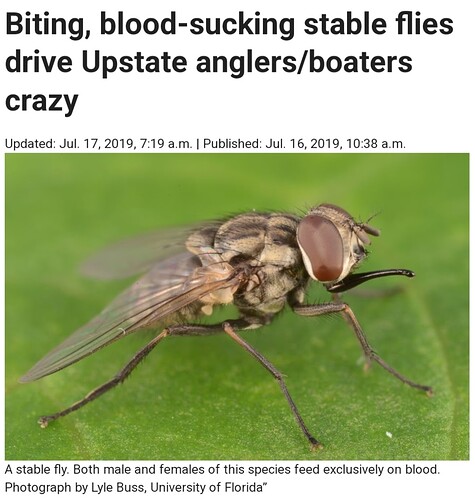 Hope you don’t get one under your deck where they can gleefully and repeatedly gnaw your exposed skin.

I think we have more spiders on the ‘i will hurt you kind’ in the southeast. Black widows, brown recluse top my list. Mosquitos and no-see-ums suck, some days much worse than others. Hurricanes suck. Bears and mountain lions scare me a lot more when I am fly fishing out west than sharks when I fish the ocean. Dont know about shark attacks numbers for east coast vs west coast. Florida seems to have quite a few every year but we dont hear about the west coast attacks here. I would think Seattle has little dangers lurking around

The most dangerous thing in this country is a moving vehicle . My wife always asks me to be careful while I’m paddling, and then I get on I-85 to get there.