Kayak - bow and stern lines - tied back to cross bars

I am new to kayaking and see the need for both bow and stern lines while transporting a kayak.

There are many posts about tying the lines to tie points on the front and rear of vehicles.
I stumbled on a post somewhere - but cannot find it again - where one suggested that the bow and stern be tied back to the crossbars instead of to the front/back of the vehicle.

As there are few to zero suggestions of this, is this an ill-advised method?

If you tie them down that way, the only thing they’ll do is MAYBE keep the boat from sliding fore/aft on the racks. Won’t do a thing for keeping it from twisting in the wind, or lifting upward as you’re driving. Tying it to the car at the front and rear will keep it from sliding, and from twisting if you tie it down to both sides of the front of the car.

I’ve had racks come loose (Long time ago) on the highway, and the bow lines tied to the front of the car kept the boats and rack on top of the car long enough for me to pull over, and fix it. When they get real tight real fast, you know there’s a problem.

Yes, @Wayne_Smith is correct - they need to be tied directly to the car. On most roof rack setups, you are only tying the boat to the crossbars - there is nothing actually going to the vehicle. Downwards angle, and the visibility of the bow line to alert you to something amiss are very important.

These work well for me, who would otherwise struggle to find something to tie to! 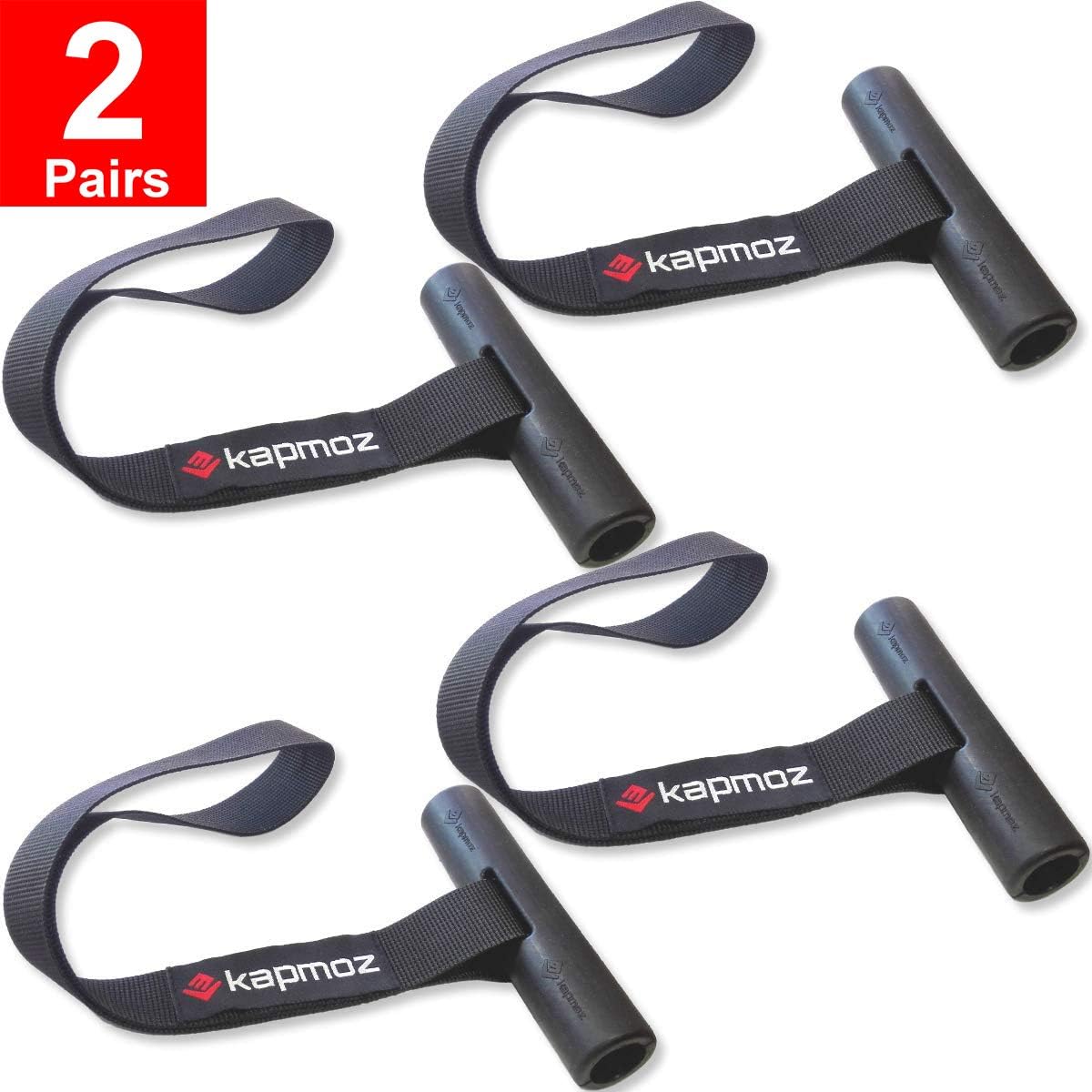 I also use hood loops for the kayak’s bow. However, mine are the style that bolt to the frame under the hood. But my car (2014 Forester) had bolt holes ready to use. My stern straps tie to the trailer hitch. I use bow and stern tie downs nearly all the time, except when I drive the 3/4 of a mile at 23 mph (in low winds) to the local beach.

Tying bow and stern to the rack itself lends to a single mode of failure - when something fails, it all fails. Separate bow and stern tie downs will be somewhat independent of the rack, perhaps allowing you to pull over after a failure before catastrophe strikes.

A local outfitter here gave advice I find very sound - you always want to have your kayak attached such that no 1 item could fail and cause the kayak to fall off. For example, using 1 long strap to the both front and back would be more risky than using 2 separate straps - if the strap comes loose or breaks, you now are not tied on at all.

Tying them to the cross bars would be better than nothing, IMHO. Should the straps going around the boat come off, then the bow/stern lines would hopefully prevent the boat from launching and taking someone else out (though likely would not keep the boat on your roof, so you would have damage to your car).

But by attaching to some place else, you are providing extra protection. For example, tying to the cross bars doesn’t give you any extra benefit should the rack system itself disconnect from the car. In this case, the whole rack system would come off. But if the bow/stern line were attached at the front/back of your car, it is more likely the whole system would stay in place. This happens - here are photos from a local club member who had the rack system fall off on a bridge: https://tinyurl.com/y37tb6tg ’

I also use the quick hood loops on my car.

I’ve had a roof rack come loose. Luckily it was at low speed and everything pretty much stayed in place while I coasted to a gradual stop. I tie down the bow and stern with the intention of supplementing my roof rack. If the ends are held securely, the rack itself will be less likely to fail. While tying the ends back to the rack in a way that prevents the boat from shifting could prove useful in some ways, it isn’t how I would set up my normal system. I’ve actually installed rear hitches on our latest two vehicles immediately after buying them for a convenient and secure rear tie down. While I know things click in different peoples minds in different ways, such that a person may simply not be able to see fit to install a hitch on a vehicle if they’re not intending to tow any type of trailer, from my personal experience and perspective, most everyone in this hobby has spent more on less. You’re definitely doing the right thing in asking about it. It’s worth taking some time to work out a secure and convenient tie down system, so that it remains a known, accepted, and convenient habit for the life of your vehicle.

I made my own, and secure them to brackets that are already in the fender under the hood. You can use pieces of tie-down straps if your hood clearance to the fender is tight. 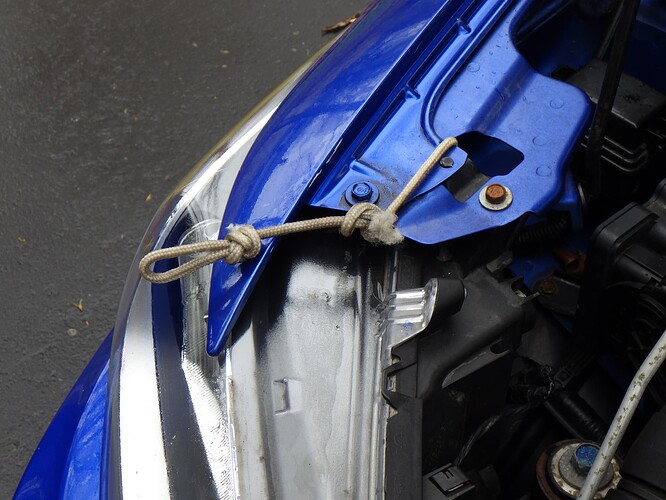 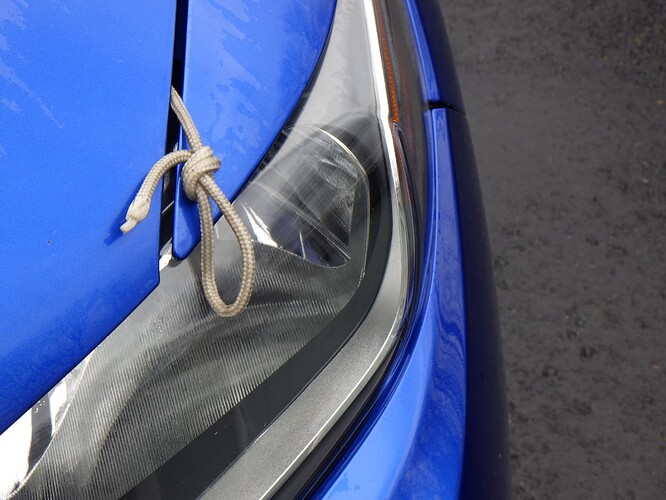 I’m also fortunate enough to have all but one of my boats longer than the car, so the bow & stern lines also 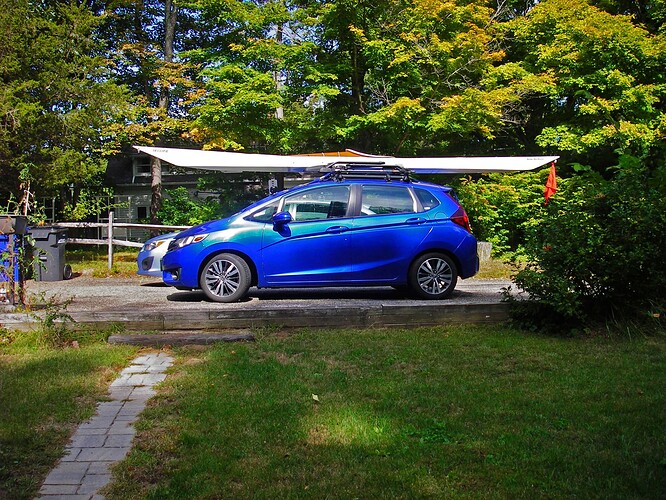 All the above covers it well.

I like to think of it as wearing two belts and two pairs of suspenders. Chances are your pants will stay up.

The huge, huge advantage of the bow line running to at least hood loops is that you will see funky things happening in that line when something is starting to come loose up top. You want that line in front of you driving.

I use ropes tied off to part of the metal under the hood, similar to Wayne. Prefer them to loops that use the car hood bumpers.

Almost all major manufactures of rack systems require the use of bow and stern tiedowns for warranty coverage. In the event of a catastrophic rack failure this may cover damage to the boat, the rack, your car, and damage or injury to other people or their property. This assumes, of course, that the failure was caused by a rack component failure and was not caused your negligence, like improper installation, maintenance, use, etc.

As to the use of factory crossbars alone to secure a load, if you’ve ever watched crash tests you will often see the factory crossbars merrily tumble off the roof on impact. Add-on crossbars attached to factory roof rails tend to be a bit more secure. If your car has roof rails, I always suggest wrapping the main straps around the kayak, crossbars, and a roof rail. That keeps everything firmly in place.