Last Thursday Frank and I headed to the coast of SC to kayak and primitive camp on Capers island a SC Heritage Preserve. We called in and had Teresa at SCDNR email us our map and camping permit which is required to be carried with you if camping. We put in at Isle of Palm Marina and were on the water by 3:30 paddling over to Capers Inlet on the ICW which is about a 6 mile paddle.

We saw a large scoop (group of pelicans) of White Pelicans roosting with their smaller Brown Pelican cousins on an oyster shell island. They are only seen here in the winter and then are not very common. We saw a large gathering of Oyster Catchers on another small island. We were a bit surprised to see Turkey Vultures eating a dead Bottlenose Dolphin. The head was missing which made us wonder what had happened.

We had mild temperatures in the high fifties and low sixties, and nights in the high forties. Water temp was around 56F so we wore our dry suits. Got to the island as the sun was setting with an extravagant splash of color and birds flying to roost. The air was warm enough for the hordes of marsh mosquitoes to be present, so as soon as camp was ready, and it was dark, we got in the tent to avoid the blood suckers. A thermacell placed outside the door of the tent helps to kept the mosquitoes away so we could go in and out without filling the tent with them. That way the only ones that make it inside are the ones on you as you enter.

Friday morning we were up to see a ribbon of sunrise color on the horizon sandwiched between a reflecting sea and a solid overcast of clouds. We paddled marsh side of Capers over to Price Inlet and Bulls Island. Ate a lunch on the edge of the maritime forest of pine, Wax Myrtle, Live Oak and Southern Red Cedar. There was an excellent shell line at the high tide mark while walking the beach. We paddled back with the sun behind overcast clouds which made for a dramatic sky. Sunset was another ribbon of color in the west below the cloud cover as we landed at camp. There were a few other campers that came out to the island on Friday, but the camps were set out of sight of each other. The island can attract a crowd in the summer so I prefer winter camping when the cold keeps the numbers down.

The forecast was for gale force winds and storms with a low in the 20’s for Sunday morning. We had planned to stay until Sunday, but decided to head back Saturday to avoid paddling against gale force winds and the tide. On the paddle back we saw a small pod of dolphins feeding, and using there tails to splash fish out of the water, and circling around to feed. Speaking of feeding we stopped at Jack’s Cosmic Dog on our way back for hot dogs fries and I got a draft root beer. They are a unique dining experience (well known locally) with a space theme of rockets, ray guns, robots, and various items they hark back to the 50s and early 60s. They serve great thin crispy fries with the skin on. A small order is anything but small, and they have quite a considerable choice of hotdogs. I had two Atomic Dogs with hot mustard, chille, and onions with a draft root beer and a small fry. If you are ever on US 17 north of the Isle Of Palm Connector you should give the Cosmic Dog a try.

Winter is best for seeing a variety of waterfowl that migrate South. Ducks like Bufflehead, Red Breasted Merganser, and Ring neck to name a few that I recall seeing. Of course there were the ever present Bald Eagle, Osprey, Herons and Egrets, Clapper Rails, White Ibis, Various Gulls and Terns, and numerous shore birds.

Our timing with the tides was way off and we had to spend much of our paddling against the tide. We managed to have an overall average of 3 mph over the 3 days and 24 miles paddled which is decent when considering the amount of time we paddled against the tide. We normally go out on the ebb and back on the flood tide, but we went anyway as this was Frank’s window of opportunity to paddle.

Turkey Vultures feeding on a Dolphin. 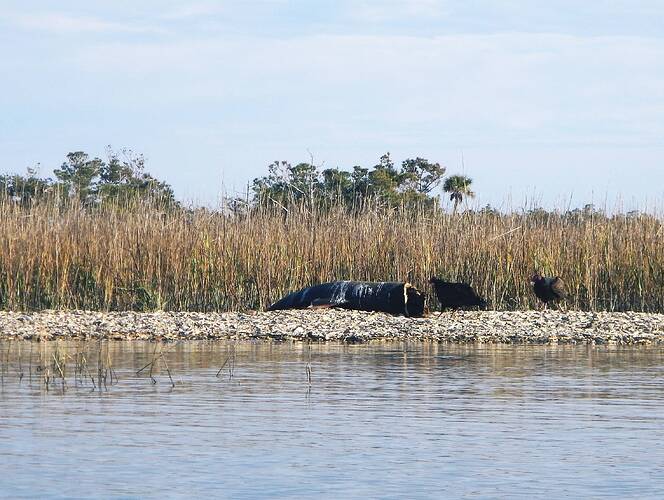 Oystercatchers roosting for the evening. 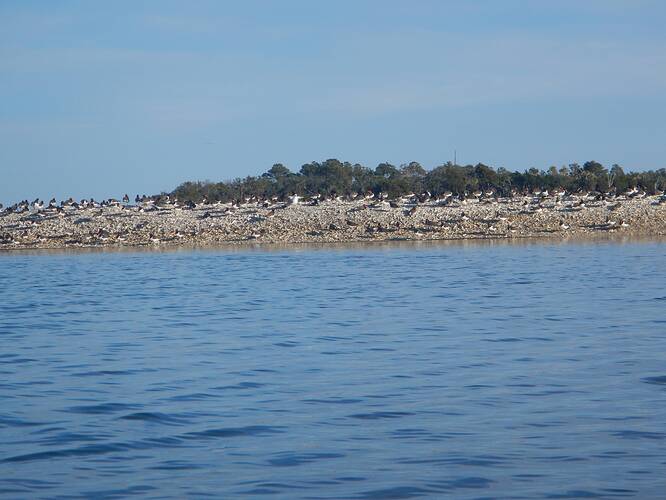 Dolphin eye hopping to get a look at us. 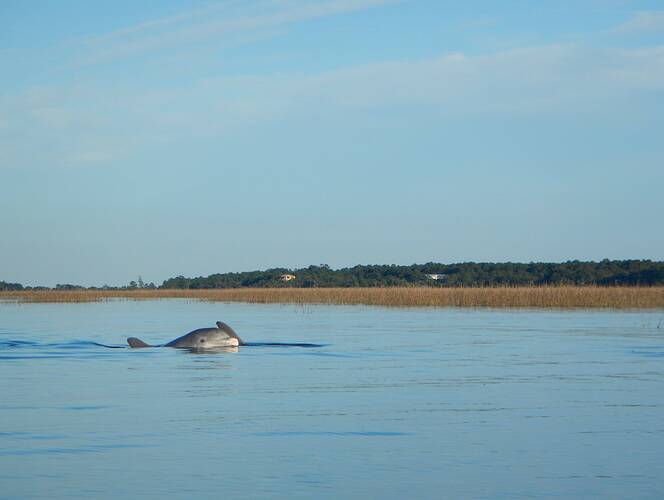 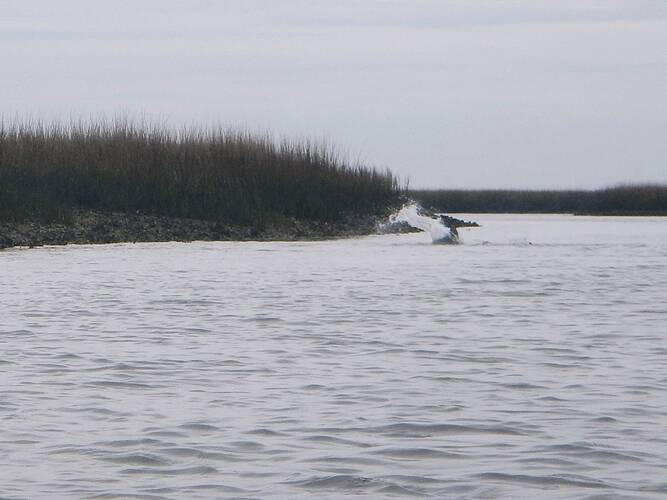 White and Brown Pelicans roosting on a small island note how much larger the White Pelicans are than the Brown. 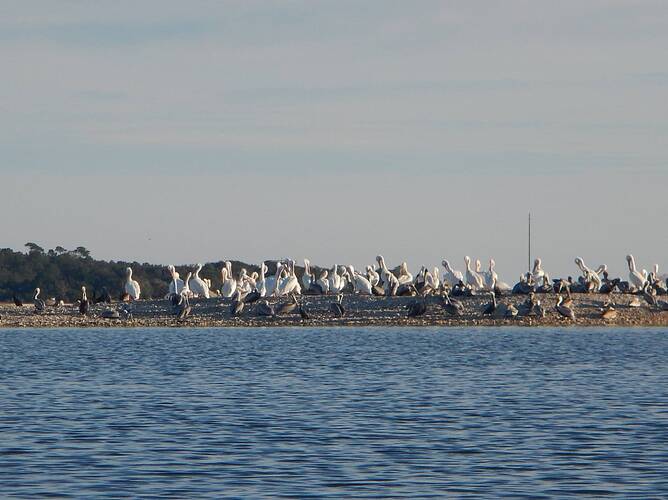 Setting up camp at sunset. 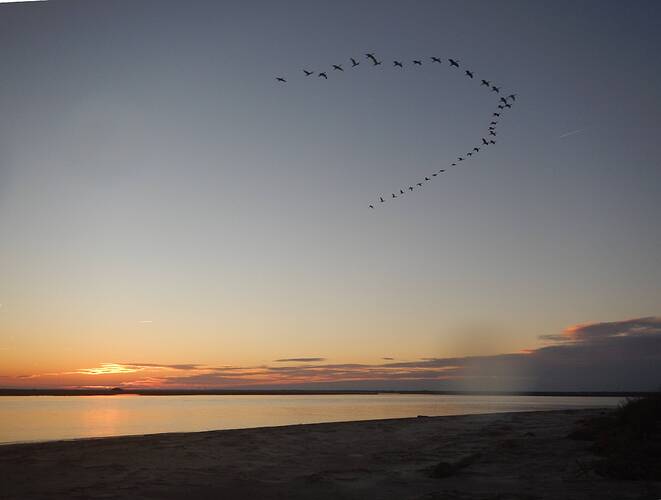 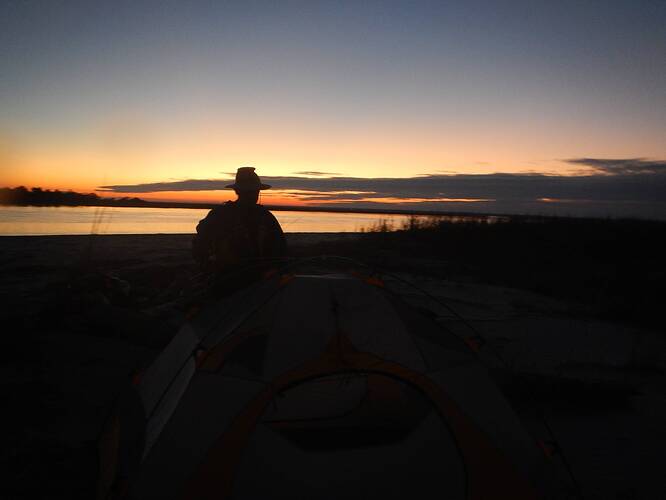 Sunrise Friday and our camp. 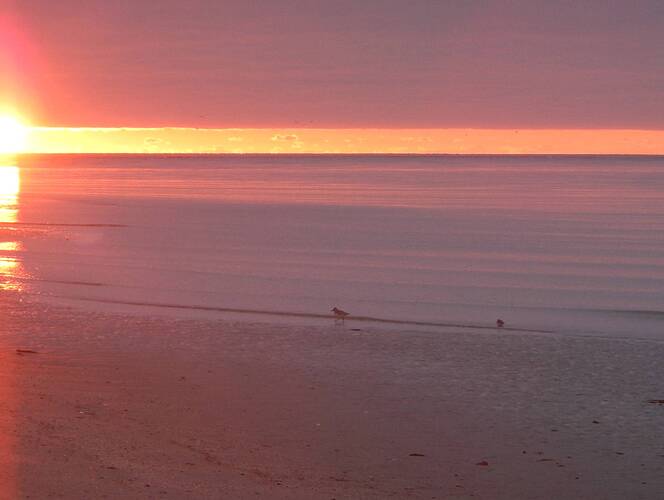 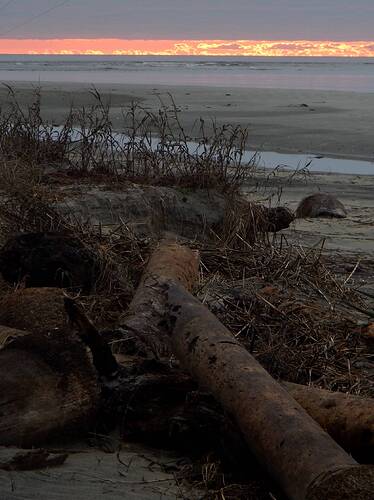 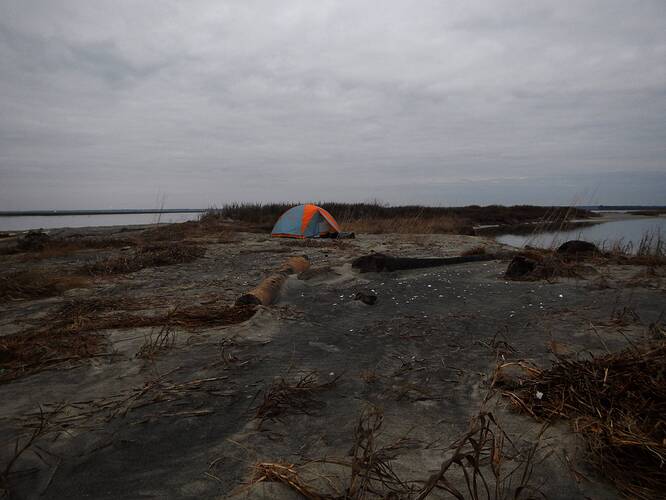 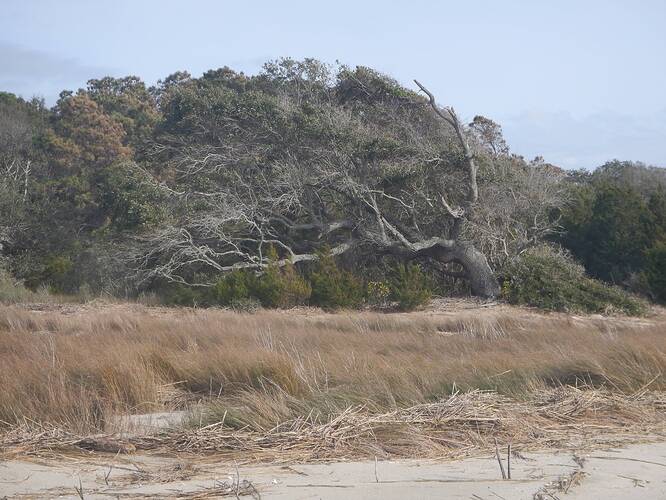 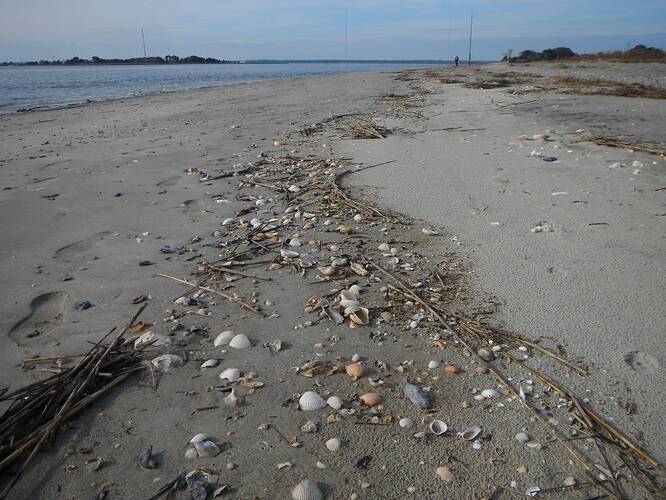 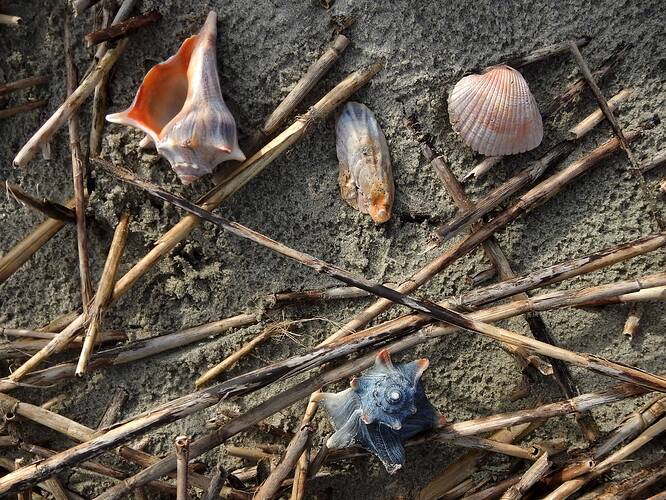 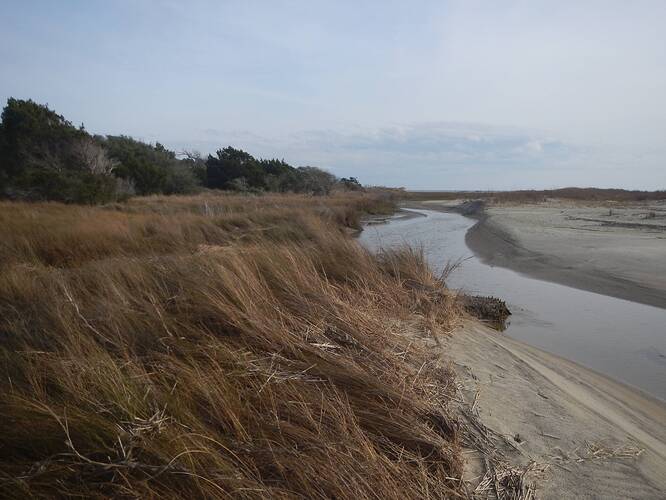 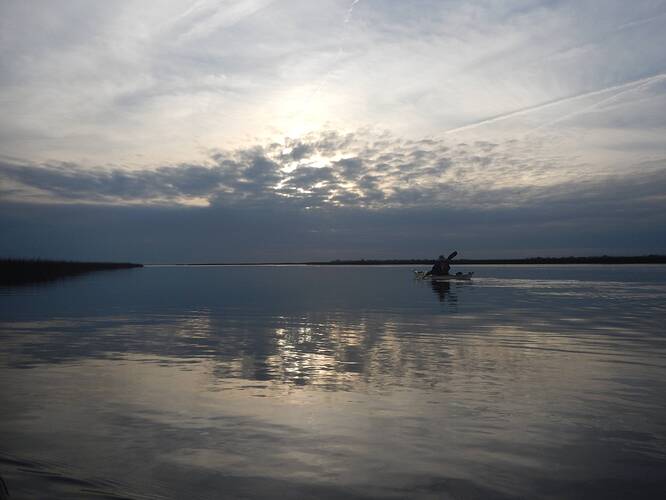 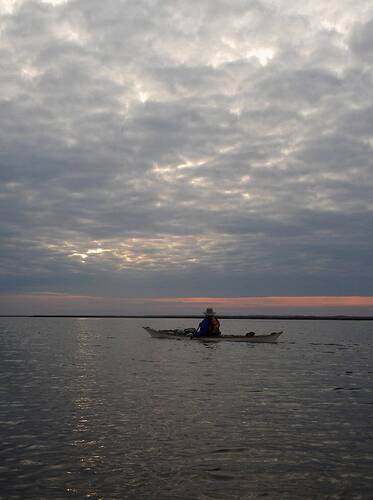 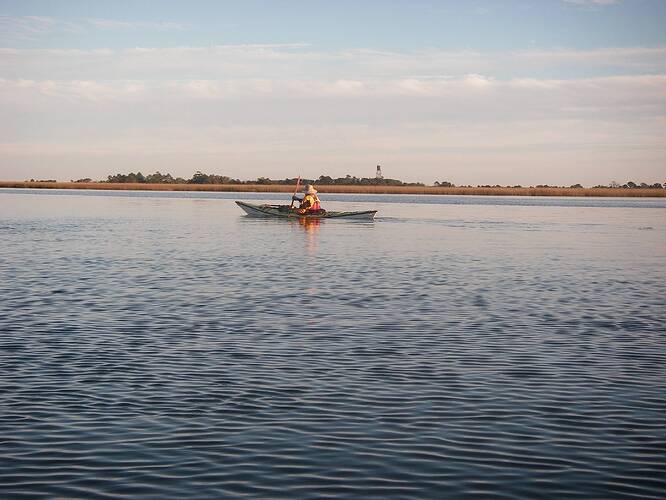 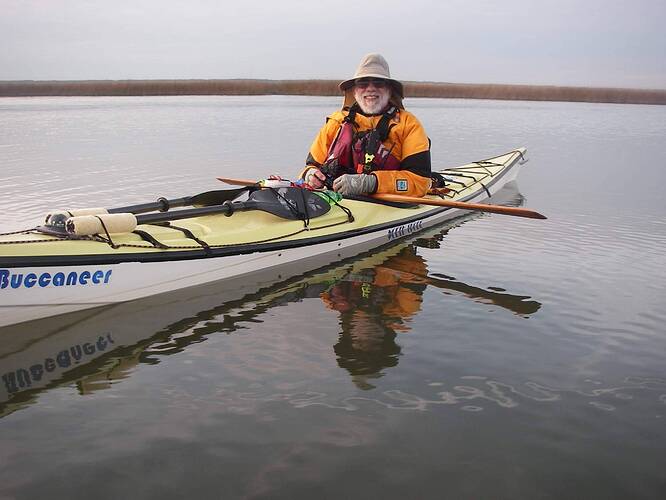 Great report and photos. Even with the speling errors. I would need some GasX after 2 Cosmic Dogs.

PS: I admire paddlers who go into that environment in winter. I spent many winter days in that area in small boats as a teenager, but never slept there.

Thanks for sharing. Very cool!
Excellent photos as well.

I posted this partly to inform folks of the island camping at Capers, and also to provide a possible destination for people to escape to this winter. By the way there were quite a number of fisherman active around the island. I saw more the one fish landed while paddling.

@castoff said:
Thanks RiverRat, glad you enjoyed the post.

I posted this partly to inform folks of the island camping at Capers, and also to provide a possible destination for people to escape to this winter. By the way there were quite a number of fisherman active around the island. I saw more the one fish landed while paddling.

++++++++++++
That looks like another great trip I would like to make one day.
I would, of course, want to get a saltwater license.
I also would want to join up with someone who knows ocean paddling and tide movements.

I was stationed on Parris Island (a bit south of where you were) in the early 1980s. I regret now that I was not a paddler at the time. I also never took advantage of the great fishing opportunities available there.
One of our Gunnery Sergeants had a small boat and he fished in the tidal rivers around there. I remember one day he brought a few sharks (maybe 24-30" long) to the barracks and grilled them for us. That was the best fish I ever tasted!
Good times! Wish I knew then what I know now.

There have been and still are
p.nutters around the Beaufort/ Hilton Head area.

@TuscarawasRiverRat said:
I would, of course, want to get a saltwater license.
I also would want to join up with someone who knows ocean paddling and tide movements.
I remember one day he brought a few sharks (maybe 24-30" long) to the barracks and grilled them for us.

Just post your plans when you make them. I might be able to meet you down there. Like I said I just dabble at fishing, but know a little bit. Fishing for Speckled Trout and Red Drum is popular, and cast netting for shrimp in season is too.

Those were probably Bonnethead sharks. Saw one caught in the surf last summer on Edisto Beach. I have seen them feeding in the shallows. They like to feed on crabs, 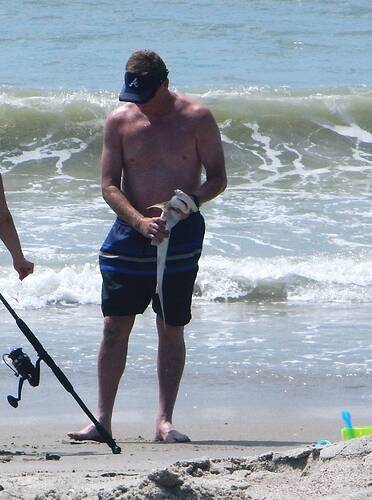 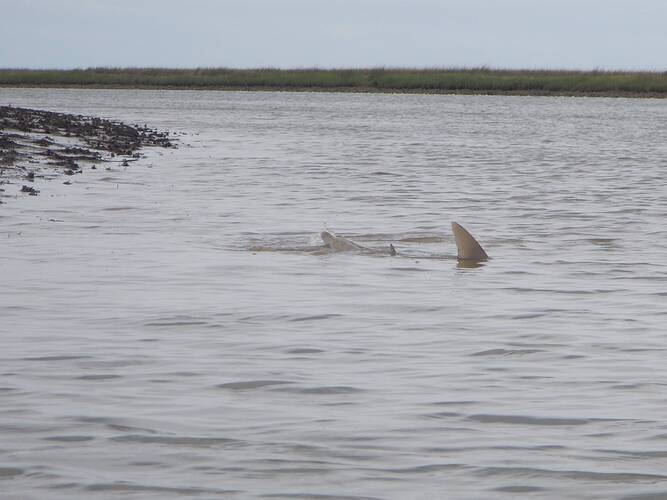 There aren’t too many of those in Ohio.