Kayak Capacity - do I even care?

I am planning to buy my first kayak and my wife’s first kayak - so marketing decision x2.
We’re early 50’s and are not planning these kayaks to be used except on local lakes and slow rivers and are looking at several recreational / day-touring / touring kayaks within the range of 12 to 14.5 ft.

My question is, does the variance of 275 to 300 Lbs of “capacity” of the 12 footers vs 350 Lbs of the 14 footers have significance for my wife and I for otherwise unloaded boat performance. Specifically, I’ve been told that my 200 Lbs (still losing weight guys, be nice) may bog down a 12 footer, and my wife’s 120 Lbs may struggle in wind as ‘too light’ in a 14.5. I am dubious that our weights would have that much impact, but that’s why I’m asking.

Any help understanding this is appreciated!

As long as you aren’t too close to the boats upper limits, don’t worry about it.
There are many factors that you look at when choosing and that’s pretty low.

Weight wise, you would be fine in either. At 200, I would look for a boat with a max capacity of at least 275 lbs.

Your wife would be rather light for either, so would likely be more impacted by wind than you. She may have trouble controlling the boat in even moderate winds.

As @CapeFear said, there is a lot more that goes into the decision than just capacity. I would start by deciding between recreational class and day touring, and then start looking at boats in that category.

As @CapeFear said, there is a lot more that goes into the decision than just capacity. I would start by deciding between recreational class and day touring, and then start looking at boats in that category.

I know there’s a lot more that goes into the decision - but this is the comparative aspect which I don’t know the actual value of, and which has come up in salespeak - hence this question thread.

A perhaps more of a concern is fit. There is a reasonable chance that a kayak that fits a 200lb person may be too big (deep/wide/loose) for a 120lb person.

As above, your wife misses capacity in the average sized kayak by a good bit. It WILL make a difference in the wrong direction if she is struggling with a boat that is too high a capacity. She won’t enjoy kayaking all that much and you could easily end up wothout a paddling companion. I have seen this happen.

She needs a boat that is quite a bit lower capacity, narrower and less deep than yours. You can fit in a lot of boats.

Oh, that’s Pretty! I wonder how much it would cost to ship to me? I don’t ‘think’ we want to start with wood… but it does give one pause at that price point!

This is in your neck of the woods. I think Rookie may have a Fathom LV? If it’s something your wife would fit well and be comfortable paddling, she would have a nice, efficient performance kayak for lakes and slow rivers. I think it’s one that’s best in the hands of someone who really takes to kayaking, where it becomes a favored hobby and enjoyable to advance your skill set. Rookie may be able to tell how well-suited it may be for a rookie😉. But when I started out, I went to a kayak shop without any idea of different styles, and when I test paddled a sea kayak, I was instantly hooked by the feel of that glide, and was confident I could handle it and excited to learn to use it better. I spent a lot of time cruising slow rivers, many days just went and played with maneuvering strokes without going anywhere, learned to roll my kayak, and just really enjoyed all of it.
So maybe that’s something to look for in a test paddle. Learn a little something about a kayak’s strengths and what you “could” do with it and learn in it. Take a test paddle, and see if it makes you smile and fill with excitement thinking about the possibilities, or if it would feel like a chore with a gut full of trepidation every time you paddled it.

a bit of a ‘popular’ item in the club, from Saturdays paddle: 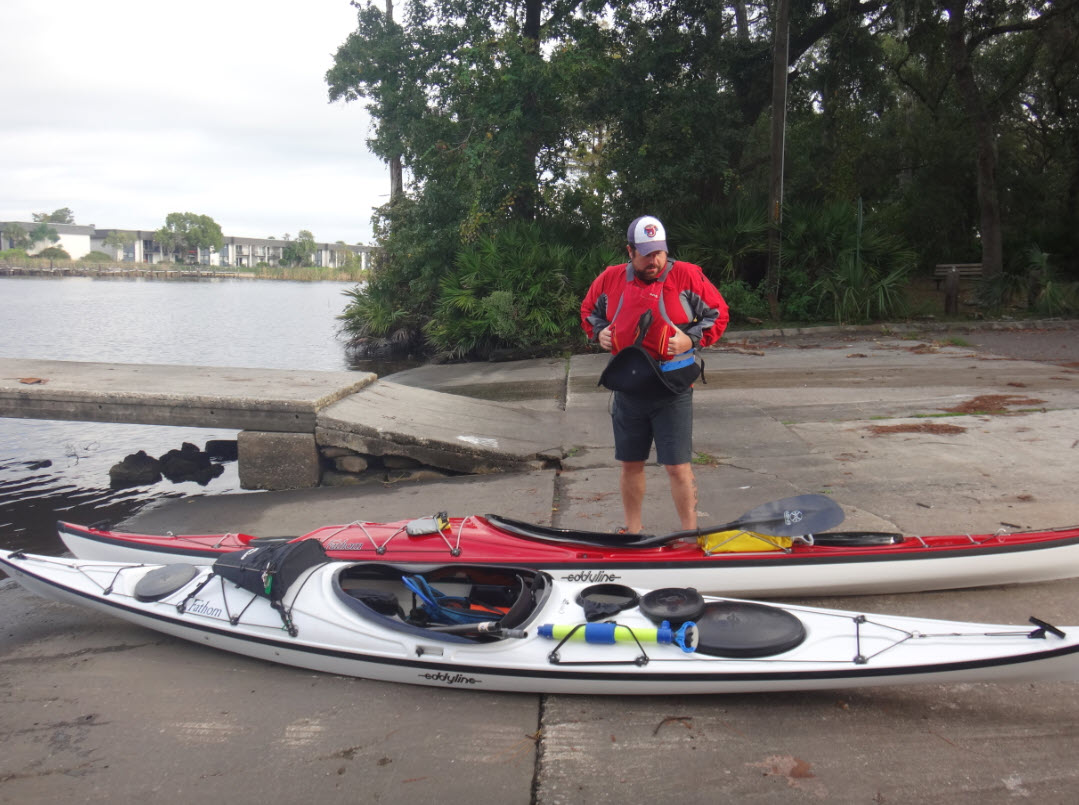 Yup. Bought a Fathom LV in my fifth month of paddling in 2014 and it’s still part of my meager “fleet.” Had a 14-foot kayak but wanted a faster boat with a better glide. Dan’s wife at 120# will wear the boat as the cockpit is very well outfitted. Foot pegs easy to adjust while on the water and plenty of hatch space. The Fathom LV tracks very well with use of the skeg. Skeg operation has always been smooth and without problem. I weigh 113# and have never struggled in the wind with that boat. Even paddling into very strong 20 mph gusts I made progress. Didn’t break any speed records but got where I wanted to go. The Fathom LV weighs 47#, which is a big plus.

The boat does have hard chines (which I personally like) so if she has only paddled fat, flat bottomed rec boats she might feel the boat is “tippy” initially. Sitting in the cockpit with loose hips will remedy that initial feeling. I learned a lot paddling the boat on inland lakes, rivers, and Lake Michigan.

That used Fathom LV on CL is definitely worth looking into. 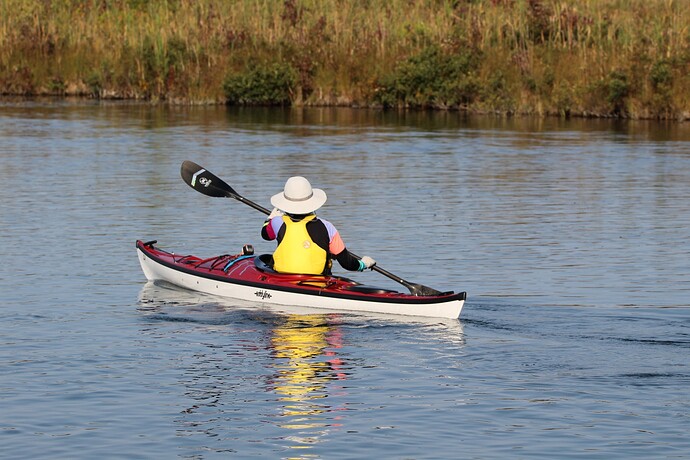 A couple of things: Don’t buy into the idea that a longer touring kayak will be harder for your wife to manage–within reason. For example, if money weren’t an issue, she would be very happy in one of the CD Danish offerings–such as the Sisu, or Karla. I wouldn’t even rule out the Prana for both of you.

Yeah, I know that represents a fairly substantial investment for beginners, but eventually you will get there if the bug gets you. Anyway at least looking at those boats should be what you should be trying to replicate. I would strongly suggest that if at all possible, you should try these boats out. Then you will know what a real kayak should feel and paddle like. Be aware though, that paddling such boats will most likely ruin you for lesser boats.There are plenty of others out there, but Current Designs should be one of the easiest to find.

If you go the used boat route, take the time to learn about the pluses and minuses of the different materials boats are constructed from. Be very aware of what to look for in poly boats. Even brand new boats need to be gone over very carefully to look for flaws, warps and whatever.

That Fathom LV looks like a great deal (for me, not the wife!), a real eye-opener as to the used market!

If you go for it, insist that the back band stays in place. Hopefully it’s a floating back band. The back rest on a pillar is a PITA.

If there was a kayaking version of football’s C’mon Man!, I think you just put yourself in first place.

Nope, she wanted a blue one, what can I do?

In all honesty, it’s an awful tiny cockpit compared to those Tsunami we’ve been in, and I got a of taste of too much boat once already going from a Sunfish to a Laser, so I am a little bit cautious. I do like Eddyline, but was looking at their Equinox as more my speed…

At the moment I have no way to move it or a place to put it yet - and I’m not going to demo it in this November water.

Not a delicate as you might think. It is a wood core fiberglass/epoxy composite. Less than the price of the kit to build new.

You might want to rent a few different kayaks before making a final decision. If you plan on being on lakes, go with a longer kayak. The shorter the boat the more the wind may be a factor for tracking. I’ve paddled a 14’ 5" kayak that is a wide and high recreational kayak. Super stable getting in, easy for non assisted rescue from the rear without a paddle float. Wilderness Tsunami 145. My husband has the same boat and he’s 6’2" and about 200. We’ve done rivers, lakes and some ocean paddling with those. I also got a 13’ 5" Perception kayak and it’s much narrower and feels really unstable getting into it and a bit tight with a dry suit on. However, it’s fast and easy to keep up with my husband. My sea kayak is a 16’ Stellar, my husband’s is 18’. Since it has a rudder, it is easier to use when it is windy. We’ve used them on bigger river paddles as well as lakes and ocean. I’m 5’4" and weigh about 140 (time to loose some). Many of my friends have 13.5-14.5’ kayaks that they use everywhere including ocean paddles. They all have rudders or the kayak is built for tracking. Don’t forget lakes can be like the ocean when the wind picks up. Whatever you do, do not get a bath tub boat - no waterproof compartment. If you tip them, they fill with water and are almost impossible to empty. If you buy used, you keep the price down and can always resell them if you decide to get something different. We’ve done that a few times as we started with 12 footers. We are now in our 60s and 70s and wanted light weight sea kayaks. The Stellars are only about 38 lbs.

In my limited experience with shorter kayaks borrowed from neighbors (my touring kayak is 17’-8" long), they vary a surprising amount in how well they track a straight line and how fun they are to paddle. So if you can find a way to test some out before you buy, that would be effort well spent IMHO. The reviews on this site can be helpful, but it’s the bad reviews that mean the most - most people are blissfully unaware of the drawbacks of their own kayaks except when the drawbacks are serious.

I think you might want to consider a narrower kayak for the wife, regardless of length. Women have lower centers of gravity, so the same kayak will tend to feel more stable for us than for men, and I find that my narrower shoulders and shorter arms make paddling a wide kayak awkward and uncomfortable (I keep hitting the side with my paddle shaft). Plus if she’s not as strong a paddler, your wife will find it easier to keep up with you in a faster, narrower boat.

Also, the narrower the boat, the less width it occupies on top of your vehicle and the less likely you will need J-style kayak racks (I noticed your other recent post about roof rack systems).

For touring kayaks it’s important to test how comfortable you are sitting in them. I hate models with low decks where your knees are, that force you to sit with your legs straight. Other people seem to have no problem with those.

I’m 5’10” and 205 lbs. I kayak with my daughter who is about 130 if that. We were paddling in wind and current and she was bouncing around in her 10’ Pelican while I was steady as a rock in my 18’ Cobra. We traded boats to give her a break. My weight in her kayak just lowered the water line and made her boat stable for me. She then struggled, though a bit less, to control my much larger kayak. We laugh about filling the bottom of her kayak with rocks, but a few jugs of water might help. Bottom line- weight matters and test drive a few kayaks before buying one.