Kayak Flag, thoughts are they necessary?

I have a 12’3" SOT fishing kayak(Third Coast: Avalon 120). I have had it for over a year and have it rigged with a fishing crate in the back.

My kayak crate is orange and my paddle blades are orange(Bending Branches: Angler Classic).

One of my fishing hats is bright orange.

I have yet to be in a situation where I thought that I needed a Kayak Flag. As a matter of fact, I wanted to keep as low a profile as possible, to the extent that I did not want to become a target via the flag.

I have seen videos of boats almost hitting or even bumping into kayaks with and without a flag.

What is the communities thoughts on flags?

Have they benefited anyone? e.g. I know that I wouldn’t get struck by a boat because I have one…
vs
Even with my flag up, some drunk @sshole still kept coming at me @ full speed…

Or even…as some stories that I heard while on a few bayous in SW LA, where shots are fired at the flag, as it is a Target for target practice.

I was eyeballin’ a ‘Bell’ bicycle flag at a local box store. It was less than $5, about 48" long with a small pennant bright orange flag on it. I though t that this would be a cheap alternative to a YakAttack Flag, plus it is taller. However, that is what prompted this thought.

Any input would be appreciated. 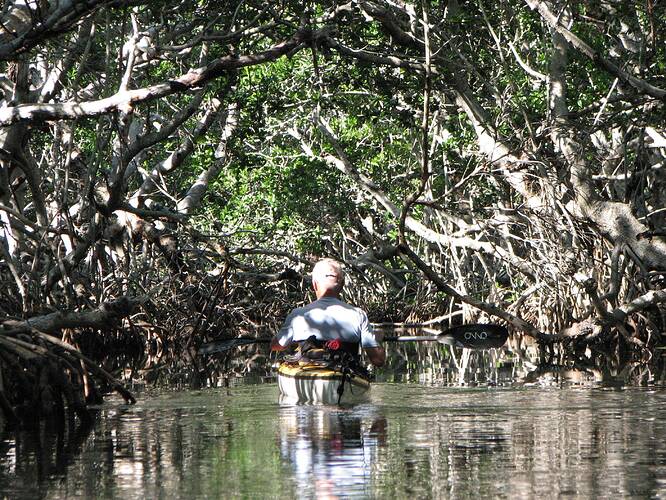 @JackL said:
![] Where I paddle in and around mangroves including many mangrove tunnels, I wouldn’t want a four foot flag mast sticking up in the air

Yes, I found that out the hard way.

I forgot that I left my pole in the trolling position and went into a Mangrove tunnel while at the Upper Tampa Bay/Double Branch Bay area. Broke the tip clean off.

However, it’s the getting to and fro within the bay that has me wondering.

As I said earlier, I have never felt the need to have one. However, I also carry a first aid kit, tow rope, and other safety equipment…better safe than sorry mentality.

With that said. If I make a quick attach point to my crate, I could set up and take down a flag as needed.

Other than low over-hangs, which I fully relate to, is there any drawback from a pennant style flag? I read, in another thread, that sometimes the flag acts like a sail, but I assumed it was a ‘sock’ type of flag. Also, some complain about the ‘whipping/fluttering’ sound. Does any of that transmit into the water? If so, then that clears up this whole mess and makes it a ‘no’ for a fishing kayak.

Lastly, while crab fishing on some weirs in southern Louisiana, my buddy said that it is not uncommon to get shot at while in the marshes and that a flag would be ‘targeted’. We heard gunshots, but nothing was close to us, and random gunfire is commonly heard down that way.

I like flags because when I am in court adter being run down, I do NOT want to hear the speedboat driver tell the judge, “well, your honor, he was in a dark green kayak close to the water wearing a cammo life vest in the middle of the lake, of course he was invisible…”
Of course, when the wind come up, a flag is a definite liability.

About two weeks ago I had a scary experience. A power boat plowing through the water at a distance, bow way up in the air, on a collision course with me. I thought for sure they’d see me when they got closer but they stayed on course. When they were close enough for me to make out the tops of their heads over the bow, I was getting very concerned and started taking evasive action. I turned my boat perpendicular for maximum visibility, raised my paddle high in the air and began slowly waving it side to side.

Very quickly after this, they changed course. Did they see me before that? I can’t be sure, but I think not. Would a flag have helped? Maybe, but for me a flag would get in the way too much with rolling and rescue scenarios.

Note that this was in perfectly clear weather, calm as you can imagine. My boat is yellow (mango), with a PFD the same colour. I was wearing a bright yellow hat at the time as well.

I think the moral is that you need to be hyper-vigilant, aware, and ready to take action to get yourself out of the way. After all, YOU are the one that will end up seriously injured or dead, not them. If a flag is what it takes for you, go for it.

I think a drunk operator or inattentive operator will run you down flag or no flag. When a power boat is running with the bow high in the air, the operator’s visibility is impaired unless he/she is standing up. The guy who hit the fishing boat a while back is a prime example as the three fisherman were yelling and waving and he still ran them down.

I think a flag pole attached to a kayak can create some unintended consequences in case of a capsize or winds. If I had to use such a marker, I’d go for a helium filled balloon. But even that has drawbacks as it may cause curiosity and draw other boaters to you. Wearing very bright hunter’s orange or lime green will make you more visible, as will adding reflective prism tape or shiny stickers to both sides of your paddle blades. But you still have to look around often, especially behind you.

With power boats, I can generally figure out their intended trajectory and stay clear. In some areas, lake lice are ten times as dangerous and each time I’ve had to wave my paddle in a defensive action, it involved a jet ski.

The more boat traffic there is the better idea a flag is, tho it is not a guarantee of safety

For safety reasons, I think they are highly necessary. It is important for visibility even it it seems redundant,

Bottom line - you have to be proactive about your own safety. To me, that means not expecting anyone to see me - flag or no flag. Since there is no time that you can safely drop your situational awareness, and you must always be ready to perform collision avoidance, a flag is just excess cargo or appendage that inhibits good boat handling.

I never put one of those things on a bicycle either…

I’m going to get the YakAttack light/flag combo, I’ll feel a lot safer with a flag during the daytime and a light at night. The nice thing about is the light and pole fold up and fit inside the flag for easy storage if you have to go into an area with low hanging trees or mangrove tunnels.

Orange is good for visuals. Yellow is the color that shows up best at sea.
Some power boat operators are inattentive.
Carry a loud air horn. It saved my life once.

Flags can be more dangerous than helpful depending on what you are paddling and where. This argument happened here in CT about 15 years ago with legislators. They can snap off in a capsize, and possibly injure the paddler. If mounted on a composite boat, they can easily breach the deck in a capsize. And in windy conditions, they can compromise control of the boat.

The flag thing comes up periodically. At one point a harbormaster in in Muscongus Bay decided to rule that kayaks should carry flags sticking 3 ft up above the deck. Probably got the idea from seeing a local tour operator using them, for a use that few would argue with. He took smallish groups of people out on tours that stayed within possible swimming distance of the shoreline. So the boats were never out in bigger traffic anyway, and if you are ducking between moored boats off a point the flags might be useful.

But the harbor master’s plan included the premise that the Coast Guard would enforce the rule. Flags are NOT within the CG’s requirements/recommendations for open water, and it is not an area which is heavily patrolled to start with. So the flag thing never went anywhere.

I think the most instructive part of this experience was that it handed the CG something which they had no clear right to enforce, even if the bay was regularly thick with patrols.

IMO, in major open water the paddler has to take responsibility for using all that space to avoid getting in the way of larger boats - whether operated responsibly or not. It is not perfect but a flag will not solve the issue of visibility for a power boat coming up on high plane. I have had better luck doing the same thing as someone above, raising my paddle with its reflective patches to flash in the sun. I can’t say with 100% certainty that is why the motor boat operators slowed down, but there seems to be a pretty high correlation between my doing that and a change in the behavior of the other boat.

I’ve been paddling for more than six decades and I have never seen a flag on a canoe, or kayak. My thought is that if other boat operators can’t see my white boat, or my bright colored pfd, they probably wouldn’t see a little flag. A flag big enough to catch anyone’s attention would definitely catch the wind and that wouldn’t be good.

I just assume that power boaters probably don’t see me and it is my responsibility to stay out of their way. Sometimes that can get exciting, but it’s part of the deal.

I dont use a flag, but have ~6sqft of traffic cone orange 3M reflective film all over my boat, another 20ft of white reflective tape, reflective tape on both paddle blades, I wear a blaze orange long sleeve shirt and have a red life jacket.

On multiple occasions boaters have told me I’m easy to see, so even if you dont use a flag, use as much Hi-Viz clothing and reflective film as possible.

Ebay has the 3m film for cheap, around 3/sqft and aliexpress has reflective tape for really cheap, like .30/ft.

Powerboaters are dangerous enough when they are on the look out for human powered craft. They are at their most dangerous when not paying attention. That is why you need bright colors AND a horn.

Bright colors always, but I have also had excellent luck with SOLAS flashing on the paddle. It works over a distance.

Horn - I am sure it works in environments of smaller water. But when you are out in more open water, it is a lot less likely to be heard over the sound of many of the boats out there. Lobster boats for example - between the sound of the engine and the blasting country western music they probably would not hear a nearby volcanic explosion. Let alone a hand held horn.

Florida…the worst power boaters come out at 10 am on the weekend . (Jetskis, skiers, runabouts) they have the least sense and experience. Just be away from traffic patterns , channels, then.

For back up, carry a heat seeking missile.