Kayak for sale no odometer only used once

Cracks me up with many kayaks listed for sale how many were used once in many years. Yes I paid 4 grand plus and paddled it once or twice.

I bought one kayak my CD Solstice GT where it was 1.5+ years old and the guy said he used it 4-5 times and didn’t like it. He had some money and bought on an exercise whim. He sold it to me for half what the boat and gear was worth not counting sales tax. He had to use a cart to take it less than a 1/4 mile from garage to launch. One scratch on deck I buffed out. Two on bottom I almost disappeared with buffing.

It was chump change to him and I think just wanted it gone. He said someone else called. I said I called first and will be there at 5 am if you want.

Then you see decent kayaks for sale pictures have mud on the hull missing hatches. You call and say do you have the hatches and they says oh yeah. I mean lay the hatches on and blast the damn boat with a hose. Don’t even wax it just get dirt off. Show more than one picture make it inviting if the kayak is good.

Zero sales skills to lazy to hose off. To lazy to even position it for a picture. Some a picture of the seat area can’t even see the bow, stern, or either sometimes.

I agree 100%. So many people buy boats and never use them, then sell for a great price. What never ceases to surprise me is how many of these people know zero about the boat and just write “Kayak - $1000”. Not even the make let alone model. And the ones who can’t be bothered to hose it down or take the leaves out of the cockpit. Those people are the reason why I have a fancy boat. Thank you, those people.

I see the same with exercise bikes and RVs. I think some people just buy such things w/the idea of it’ll be a good thing to do, but then never do it much and get tired of looking at it. Some even buy them for social opportunities and just move on.

There’s some code that’s used by sellers and good to know:

“Just needs hosed off” means the dirt is so bad that they couldn’t get it off.
“XYZ broken but super-easy to fix” means it’s broken beyond repair and parts are no longer available.
“Must sell by end of day” means they’ve been trying to unload it for weeks and will keep trying for weeks to come.
“Needs carb adjustment” applies to lawn equipment and means they left it sitting for several years with old gas in it.
“Brand new” means that it’s mostly intact and they’ve used it for only a couple of years.

I’m sure others know of more of these seller code phrases.

Around here, now, most ads can be as vague as orange kayak or blue kayak or maybe even just kayak for sale and they get snapped up if they look like a typical rec boat at anything less than gold-plated prices.

I suspect that there will soon be many “pandemic” boats coming on the market soon at great prices as people find that it takes more effort than they thought to get a kayak on the water and paddle it.

I think most pandemic buying is rec boats below 14’ probably 12’. Group on FB I belong to is really rec kayakers. I think of them as floaters not kayakers.

They large majority are totally clueless on safety. Three thousand members and I doubt 50 have much experience. They are coming around in the safety aspect, well enough to make me feel it’s worth staying. I had a flak jacket for most of this winter. There are 4-5 of us that push safety and have knowledge. Almost signed of a few times but figured if I can save one from catastrophe it’s worth it. There were a few deaths locally and some close calls. That woke up many.

I love to find the ones that are dirty , bungees need replacing or missing or other blemishes. Those are the ones that can be bought right. One of my better buys was standing full of water, covered with lawn clippings. I knew it didn’t leak as it was holding water. A good cleaning with a little bleach and it was good to go.

Just saw a older perception advertised. The didnt even try to pull it out of the weeds that have grown up around it. I think it was a Scimitar.

I had an opposite experience. I went to see a kayak that was “used only 3-4” times." The boat was scratched up and beginning to fade. Well, the present owner only used it 3-4 times, but he bought it “from an old lady”.

Let me guess, she only paddle it on Sundays in perfect weather and calm seas.

Mine was literally under a ladder in the Craigslist picture. 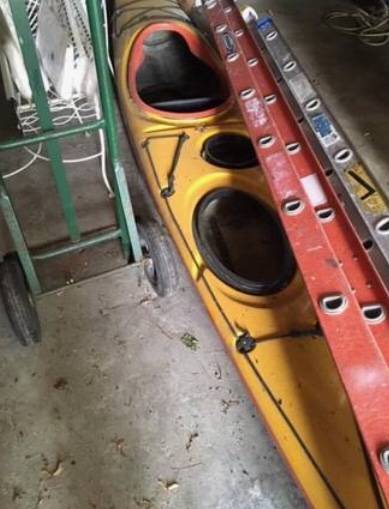 Mine was literally under a ladder in the Craigslist picture.

That looks like a carbon layup. I’ll bet you did gooood!

It’s a wonder that some sellers won’t take five minutes of effort to make their item look desirable rather than a hunk of junk that’s just in their way.

That’s why I’m putting my boats in the will, giving them to paddlers.

At least it’s indoors. The one’s that kill me are outside in the mud, with mud on them, and leaves to top it off. I guess better for the buyer if you can see through all that.

Twas only one Sunday Matilda set out
in her kayak across varied seas,
of the Bellagio fountains as they began to spout,
she was a showgirl in roll extrordinary,

but was only one problem with her Tempest midst tempests
when with a lascivious crowd ya must flirt,
with one leg up to extoll her sultry eskimo roll:
For Sale - waterlogged Tempest, concrete hull scratches, needs skirt.

12’ is my sweet spot - I’m often turning around in tight creeks, having gone as far as was navigable. And I’m often floating; that’s how you see the wildlife. And take photos. But last year I was out an average of three times a week through an eight or nine month season, in six states. Different strokes -