Kayak going in circles. Why?

I have 3 hard questions for you all. I just bought a used River runner Dimension, hdpe, 13 ft. No skeg. No rudder. I took it out for a quick trip by myself because I wanted to make sure I had installed the new seat correctly and the bungees and I didn’t want to delay anybody if I had to make corrections. Plus I wasn’t all together sure if it didn’t have a leak somewhere. It got great reviews on this site although not very many because it is a old kayak. 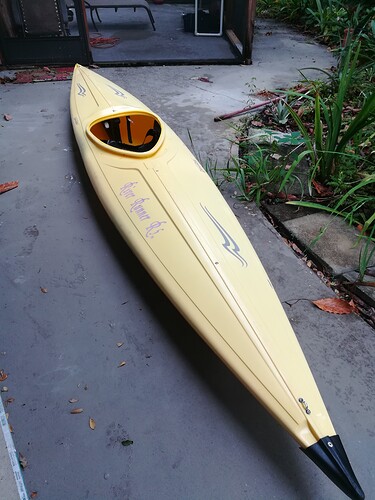 I went out inside the sea basin heading SW at Low tide, 20 mph winds. It was literally spinning my kayak around. If I fought hard enough I could get it to go straight into the wind for a couple of strokes, and then it would just get spun.

How would I solve it…Take a Sea kayak not a white water boat.

Likely reacts too easily to wind due to design.

Look at the bottom of your boat. If its relatively flat, smooth, no keel, what is to stop it from spinning. It may also be warped. Does it go in a full circle?

Adding a skeg would certainly help, but the bottom line is that your kayak is designed to turn quickly and easily, rather than go in a straight line. As the name implies, it is a “river runner”. It is an older whitewater design, when rivers were run more than played in. I hope the person you bought it from didn’t tell you how great a boat it was for the bay. Too bad you didn’t take it out for a test paddle. I’d keep looking for a more suitable boat if you want to paddle open bays.

Actually, I bought it for the twisty Rivers we have here in swampy Florida. I guess I never put two and two together that a river kayak would not work in the windy bay. I already learned the hard way that a sea kayak does not work in a twisty river.

I didn’t let it go in a full circle. I would play with it by turning it the other way or backing it up. I do have to admit it was very responsive to playing. I got the feeling that it would go in a full circle because the wind was directly behind me or in front of me depending on the position of the boat if you know what I mean. I enjoyed the fact that I with every stroke it was responsive, too responsive in that wind, the real problem was trying to get it to go in a straight line. I will definitely keep it for twisty Rivers that won’t get a lot of wind.

I already learned the hard way that a sea kayak does not work in a twisty river.

In my limited experience on twisty rivers:
A sea kayak actually does work quite well if you position the kayak so it takes advantage of the difference in current velocity near the banks and in the centre of the river.

Near the inner bank, the current runs slower than in the centre. So if you make a slight turn in towards that bank just before the turn, the fast current in the centre will pull the stern around in the turn, so you don’t have to do anything to turn the kayak.

It is of course a balance - you can overdo it, and then you will be pushed into the inner bank instead of being helped.

Get the right kayak for the task at hand.

Sea kayaks work fine on twisty rivers. For years I have used a 17 ft kayak in winding bayous/creeks/swamps/rivers that are often barely 17 ft wide. Though it is the reason I bought a 14.5 ft sea kayak because I’m getting lazy. Getting the kayak to do what you want starts with you - work on your paddling skills.

A sea kayak may work just fine on the twisty rivers that you paddle but I don’t agree with a general statement like “sea kayaks work fine on twisty rivers”. I paddle many small rivers that are full of downed trees where you have to make all kinds of zig-zags to find a way through, or make quick u-turns to give you more time to inspect a difficult section. Safety requires the high maneuverability of a river-capable boat. Even then there are places where a 14 foot canoe can sneak through but a 15 cannot. If your path is blocked by downfall a sea kayak is not the best option for quickly hopping out of the boat (in current) and dragging over downfall or portaging so you can continue…and that’s assuming you can find a decent spot to pull over or parallel park against a downed tree with a 17 foot boat. Again I’m sure you’re fine where you paddle but people sometimes get in real trouble when they don’t use an appropriate boat for the conditions. 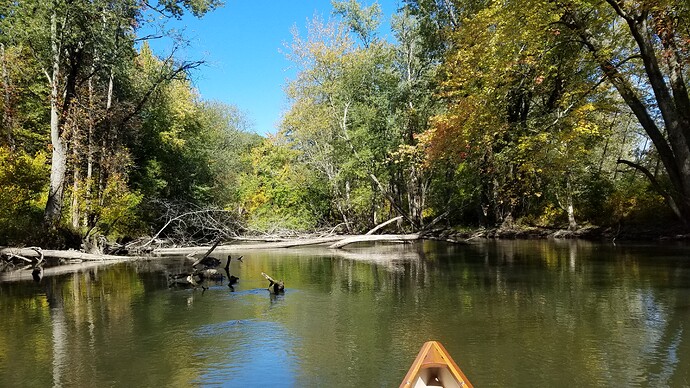 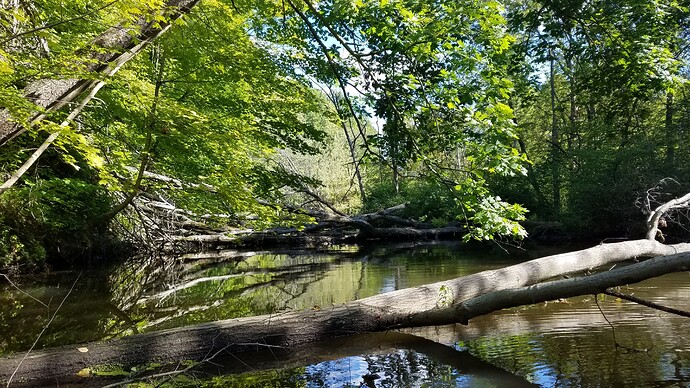 I have a similar old kayak. You have to keep a close eye on the water going past the bow and make a correction on every stroke for how much the bow is going left or right. If you let it go two strokes turning in the same direction then its too late. If you want to mess around you can make a diy skeg with tin snips from a tin can, bend it into a tee, and gorilla tape it to the boat. Instantly changes everything.

Thank you! This group is so helpful even more helpful than my kayaking friends. I was thinking of buying one of those glue on skegs. And from and earlier Post in this group, I learned where I should place it.

I did notice in the very short time that I was out yesterday that it seemed to take no energy to turn that nose. It was hard for me to judge what was really going on because the wind was 20 mph and I was heading directly into it. My last post in this group was about problems with my seat kayak keeping it going straight into an almost headwind. I learned that the skeg on that boat was the problem because the minute I pulled it up, things got better. The river kayak was supposed to go wherever I wanted it to go and I panicked when I just kept getting spun around. I guess going out in 20 mph winds was not helpful in trying to learn how this River kayak worked. From now on it’s protected Rivers only with this kayak.

I still like the idea of a skeg because there’s no way I’m going to be Whitewater kayaking and so I don’t need that level of flexibility. My only concern at this point is I guess I have to load it upside down on my car and wondering if that would be a problem.

Glad to hear the skeg made all the difference. Guess it’s back to Amazon.

Oh, I learned the inside turn trick early on, but this was four miles of twisty log filled shrub filled alligator filled River. Most of the time I was able to hit the inner curve, but when I missed, which was often, I would end up in the bushes or just about killing myself trying to make it around each and every curve that I miscalculated. Never again. 16’8" carbon fiber and worried every minute about cracking something. It would have been fine if it were all downriver, but we did four miles down river and then four miles back up and it was the back up that just about killed me. I don’t doubt that someone with better skills would be able to do it because there was a woman in the group leading the trip in a canoe! She was way way way way way ahead, but she’s been paddling for 50 years.

I wouldn’t want to paddle that logjam in my 10ft creek boat. Find a waterway that is at least fairly open and enjoy paddling any kayak.

Those of us with a “fleet” would opt for the shorter plastic hull. As a beginner 25+ years ago, some logjam waterways I probably should not have been on helped me learn to maneuver a Looksha 17.

Oh good, you’re from Florida. There’s a trip coming up next week going from Rogers Park to weeki wachee. It’s 4 MI upriver and there are some areas that look pretty tight, but most of it looks navigable for a sea kayak. I won’t know what the winds will be like, but I know I’ll be paddling against current for the first four miles and then we’re going to float the return miles. Do you know that River well enough to know which boat I should take? PS. The skeg for the river runner comes in tomorrow and I’ll be installing it immediately.

Last time I did it was in n a 17 ft Sea kayak. I didn’t think the current was that strong. The second day we paddled from Mary’s Fish Camp, on the Dead River , to Rogers Park. Nice water park. We took out for a rest next to the outfitters trailer in the inner park. It was December. Good time low paddlers numbers.

My friend Mike paddled on up to the spring head in his Sea kayak and back to Mary’s FC. We went out to paddle the gulf. We’d paddled the river the day before. When you get to “Hospital Hole” , mile +/- up stream from Rogers look for manatees. There are usually some there.

I’d take the Sea kayak. Most people get Into trouble going up stream because they enter current at curves at 90 degrees to the current. It will take you across the river and you won’t have any control. It’s not the boat. It’s you.

Have a good time. Drifting though is boring.

PS…river is narrow tree sheltered and houses (1 side) close to Hospital Hole to Rogers wind is neglible.

Last year at the flats at the end of he Weekie Watcheee (spell check conflict) river dolphin were feeding on mullet. I paddled through a mullet school fleeing the dolphin. A few mullet took up positions under my boat. Flipper came in and got those fish in 2 ft of water under the boat. Exciting…you paddle faster when that happens.

Sure…I agree that canoes are just better if you need to pull over a tree.

I like deadfall-challenged rivers since they are often secluded and natural and powerboats can’t follow and I enjoy weaving around (and bumping) obstacles. For me it’s just not that unusual to find myself in places where a foot or two of length will make a real difference in your ability to pass through vs getting stuck.

And that’s the problem with the carbon fiber kayak. You don’t get the luxury of carefree bumping into logs and Cypress knees. I have to admit that as I was bumping into things, being run into bushes and shrubs, doing 360s trying to get my kayak going in the right direction, back paddling into current heading the wrong way downstream, losing my hat, limboing under downed trees, just barely clearing logjams, almost losing my paddle, overall I was enjoyable entertainment for the sweep guys.