I have been trying to take decent care of my kayak and avoid scratching it, but so far the kayak has fell off of the dolly about 3 times this season. Usually it happens right after a turn or when I’m close to the water it just falls off just before I get there. Perhaps I am not mounting it properly or I don’t have the right equipment.

Actually, I found a picture from last weekend where I had the dolly mounted and tied in two places to the kayak. It did not fall off this time, but I did the same thing just this past Saturday and it still fell right off after I did a u-turn. Are my expectations too high? Is there a better piece of equipment I could purchase to prevent this from happening? I was thinking maybe if I got a dolly that had a foam pad instead of rubber that it might possibly stay on better (I’d think the foam pad would have more traction). I’m really not sure at this point.

Any advice is appreciated. How do you all keep yours from falling off? I’m thinking I’ll just have to be very careful and instead just push (dolly in front) going forward until I can find another way. I suppose if I avoid u-turns and instead push instead of pull, it’d also be a lot less likely to slide off. I am open to buying something that works better. 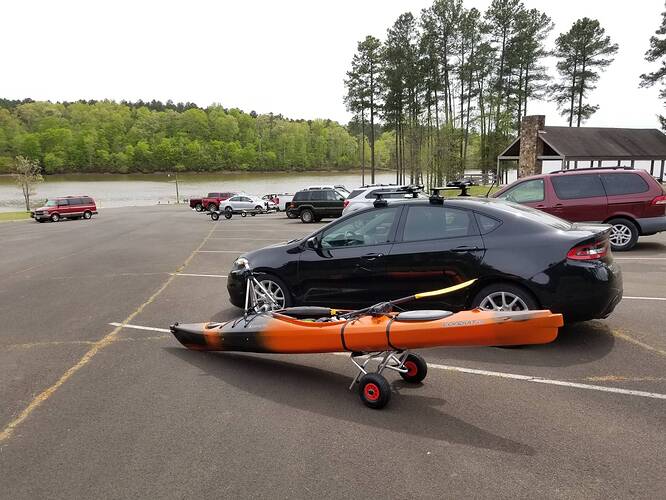 Your photo shows you aren’t placing the cam straps properly on the cart. At least, it sure doesn’t look that way.

With the cam straps correctly placed and snug around the boat and cart, there’s no way your kayak will fall off.

When you say fall off - is the kayak falling over but is still attached to the dolly? Or is it falling off the dolly somehow?

ps- scratches are not a serious issue for rotomolded plastic boats lie yours. Falling off a dolly likely wouldn’t even scratch it, but if it did, it is only cosmetic.

Your strap location is the problem. The dolly needs to be placed under the cockpit enough that the straps catch the outer edges of the cockpit. One front, one behind and the coaming will hold the straps in place. And it is a plastic boat - you will be a lot happier if you lose some of your concern about scratches.

Thank you all!! The link From Rookie explains it perfectly… I Had lost the instructions. I generally try to look over instructions carefully, but I didn’t this time and I’m not sure if I had any that explained that. I can see how it’s very unlikely to fall off if I follow the steps at http://topkayaker.net/Articles/Instruction/Wheeleez.htm and also move the dolly under the cockpit.

Peter-CA, I think it may still be partly attached. Maybe it’s sliding off the side - I didn’t pay close enough attention.

@atpatter said:
Thank you all!! The link From Rookie explains it perfectly… I Had lost the instructions. I generally try to look over instructions carefully, but I didn’t this time and I’m not sure if I had any that explained that. I can see how it’s very unlikely to fall off if I follow the steps at http://topkayaker.net/Articles/Instruction/Wheeleez.htm and also move the dolly under the cockpit.

It won’t fall off once secured like the article shows. After my first paddle of the season I had to push/pull my boat up a small hill with deep sand and lots big rocks hidden in the sand. The cart had sand tires and the rocks were like hitting a ledge. I nearly fell over but my boat was fine.

Having hauled a variety of “mini utility trailers” and carts, I have to say that pushing never works as well as pulling, especially if the ground is rough. Try it with a heavily-loaded wheel barrow on either sand or rough ground. You’ll fine out in a hurry that pushing increases the strain on the whole setup, while pulling reduces it (if you know how to calculate forces with vectors, the reason is clear: The loading of the wheels is reduced, as are all other forces involved in moving the cart/trailer/whatever, and that includes the connection between boat and cart).

Anyway, the real problem here, which is the difference between a good tie-down method and a bad one, has already been solved.

Place dolly under cockpit. Cross straps forming an x across cockpit. Tie a tail to a deck line on the uphill, direction you intend to pull it and things will be fine.

I have same set up and no problems. Pull the boat. Don’t push.