Kayak or hybrid canoe for paddling with 3-6 year old?

My husband and I would like to take our son out paddling with us on flat water rivers/lakes. We paddle in Pungo 120’s ourselves but are looking for a sit-on-top or hybrid kayak/canoe that could accommodate a small kid but that would still be easy enough for one person to paddle (or to use solo). We tried just putting him in a Perception Tribe between our legs but it was uncomfortable for everyone. I’ve looked at various hybrids (Nucanoe, Next, etc.), the Juntos, and even fishing kayaks with open decks but am not quite sold on any of them. I’d like to avoid going to a full tandem because he won’t be old enough to really help paddle for a while and we’d also like to use the kayak solo when he’s not along. Would also like to avoid a regular canoe because we’re used to kayak seats and kayak paddles. Any suggestions?

There is no reason you can’t paddle any solo canoe with a double blade kayak paddle, although you may need a longer paddle than you have been using.

I converted a used 14’7” tandem canoe to a solo by reconfiguring removing the two seats and replacing them with a single seat and moving some of the thwarts around. IMO 14’7” was too short for a tandem for larger folks but makes a great solo length for myself and quite a bit of gear. I think I could even manage two small kids placing them in the spaces I have for cargo. Of course you can buy new what is called a pack canoe and have something similar to what I have and likely be quite a bit lighter. With a little one and recreational flat water in some ways I like the stability of a wider hull like I have.

As you are adding a third boat you will still have the 2 Pungo for going out together so a canoe as a third seems logical for me. Little ones need a little room to move around and I would want them in front of me far enough to be able to paddle and maybe sitting on a floatation cushion keeping them lower and where you can keep an eye on them.

We have two little nephews 4&5 and are hoping to get them out this summer. They would both fit side by side ahead of me.

Here is a pic and you can see how you can divide the space anyway you like in a canoe. The main thing is getting the weight in the right areas to stay level. 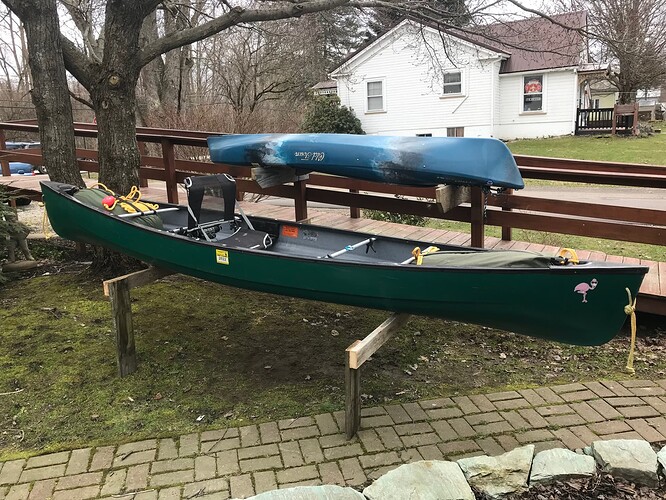 Hobbie and Ocean Kayaks used to make tandem kayaks that you could move the seat to the center position and paddle with a child in the front seat (and the rear seat too). Unfortunately the upscale fishing market has taken over and these kayaks are no longer made.

My experience paddling with my son when he was about 4 to 12 years old, was using a 16.5 ft tandem canoe, and I would paddle from the center thwart when he was small, kneeling, and we used the seats when he was tall enough to actually paddle. A word of advice on kids and paddling is don’t spend too much on a boat you are going to use with kids. Even if they love paddling a 3 to 5 year old is going to get bored very quickly. When my son was very young we spent more time on the shore hunting frogs and crayfish, throwing rocks and hiking than we actually spent in the canoe. Make canoeing fun for them and don’t plan on being goal oriented, just get them out on the water and comfortable with boats, and when they are older you will have some very loyal paddling partners. I’ve paddled and kayak surfed with my now grown son, all over the western US, Hawaii, New Zealand, etc.