First off, in a solo canoe, I’m a kneeler. My whitewater boat naturally has a pedestal/saddle. I also put one in my Yellowstone Solo. I spent a lot of time carving it and it’s extremely comfortable. I will very occasionally use a double-bladed paddle when paddling the YS. Obviously, since I have a saddle in that boat, I am paddling with a kayak paddle in a kneeling position. It’s always worked for me, and I’ve never thought anything about it— until now.

I recently acquired a beautiful Curtis Ladybug and I don’t have it in me to remove the original seat. So I’m keeping it. This past evening, while taking it out for only the second time, I tried using the kayak paddle. It never occurred to me to sit. I used it in the kneeling position as I always have.

When paddling a kayak, feet are out in front of you, and you have foot braces. Maybe I am missing something about body mechanics and efficiency. Do those of you who are kneelers and sometimes also use double-bladed paddles, do you change position and sit—or do you continue to kneel?

You can add a foot brace to your canoe to add efficiency when paddling seated using either a double-bladed paddle. The best canoes for using a double-blade usually have relatively low gunwales and are not too wide. The Ladybug should fit that bill pretty well.

I usually sit when I double blade my Lady Bug. I do have a Wenonah sliding foot brace installed for sitting paddling. The Lady Bug works great with a relatively short double blade - I set mine to 225cm.

I sometimes double bade solo canoes while kneeling. Others have posted about doing so.

Some of the solo canoes have kayak seats and foot pegs. I can’t kneel any more. So I sit on the wicker seat, with a camp pillow and cross my legs in the solo canoe.

Hey Scott, if you want a paddle that’s as sexy as your new canoe you may want to go grab that Blackburn that willowleaf passed up. It’s a great match to the boat for paddling (esp graceful freestyle type moves) and it’s another way to make your ww pals jealous. It’s also as pretty as the boat and would be useful to you as a photo prop.

I just got home from paddling it for the third time in the four days I’ve had it. I took the kayak paddle—a Werner Skagit, but totally forgot to try using it in a seated position again. I only used it when I got to water that was so shallow my regular paddle would have been hitting rocks. I bought the Skagit, because it was affordable, and because I almost never use a double blade.
I can’t remember the length offhand, but I’m sure it’s the proper length because I certainly would have researched it to death before buying.

TomL- I took a long hard look at the Blackburn that Willowleaf posted. Two things, though. While it does match the boat very well, you evidently mistake me for someone who is even remotely capable of doing those “graceful freestyle moves.” The other thing is— I have three beater paddles in the garage. In the house, I have 11 wood paddles hanging on the walls. The sweet and loving wife that allowed me to buy the Ladybug will be way less sweet and loving if I get caught trying to sneak another paddle into the house—assuming she’ll want to continue being my wife at all. Besides that, she already knows all my hiding spots.

Of the 11 hanging paddles, only a few are still users. The most recent and current favorite is a Bending Branches Sunburst ST carbon/wood hybrid. I do have a question about it, but it will be more fitting in another post.

I’ve yet to refine my single paddle technique (I will need coaching for that) so, though I bring along the Foxworx paddle I bought last month I have mostly been using a vintage wooden 220 cm kayak paddle (branded “Walden Kayak” but was made for them by Bending Branches). It has worked very well – the blades are slender “beaver-tail” shape – both sitting and kneeling. 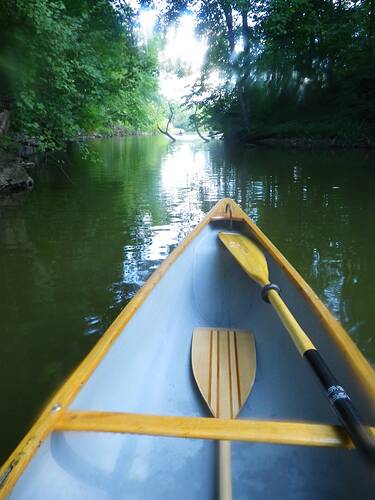 Willowleaf— we live too close to one another not to go paddling together sometime. I’ll happily pass on all the bad habits of single blade paddling that I’ve accumulated over the years. At least I have a bunch of your-size-my-size paddles you can try.
I bet that wooden double blade or yours looks great with your new woodsy-green boat!

Sounds like several good points and suggestions have been raised on this issue. I might add that some native kayakers along the Pacific Rim knelt in their boats when paddling as well. Some used a single blade, like a canoe paddle but typically pointed at the end. They would sit on a bed roll or other “saddle” while squatting in the cockpit.

Sounds like a good idea, Scottfree. I’ll PM you my contact information. I’m gonna be tied up for a week or so with projects at my rental property to get it ready for new tenants on September 1 but after that I hope to get some more time in the canoe. Maybe we can do a Bug Rendezvous!