Hello again. We have moved to a new place, with further downsizing involved. The space that would be adequate for storing two 17’ sea kayaks (in the garage next to one vehicle) will only suffice if I put in a rack for them. Right now, one kayak is on foam blocks there, and the ofher kayak is sitting in the middle of the living room. While this does not bother me, my husband is making more noises about Get That Rack.

I have looked into different racks available commercially. I want a freestanding rack, not a wall mount type. The Suspenz J-rack for two kayaks should fit in the space without trouble. It is expensive but looks sturdy. However, I have a big concern about it. Would someone who has used one please answer this question: Does removing either the lower kayak or the upper one make the rack unbalanced and want to tip forward? I would prefer to put my kayak on the lower arms, so that if I paddle alone that day I can just lift it a very small amount onto the floor and then place a portage cart under the stern to move it out of the garage. That means a heavy kayak will remain on the top arms. Does this make the rack unstable?

Thanks for feedback on this rack. There is a Plan B that involves DIY work but I am sick of DIY now and there is still plenty of it left to do in other respects!

Don’t know the answer, but glad to see you back.

Thanks! I still paddle, though much less than what was normal for me. The combination of things still to finish on the house and an exceptionally bad drought (think “one shrunken venue left out of the original three”) has really cut down on the paddling.

I trust you are still working hard at becoming a better paddler. Enjoy the last part of summer!

Good to hear from you.
. You said no DIY, but 2 kayaks can be hung , one above the other , using a couple of lag bolt eyes screwed into a ceiling joist or 2. Hung on their sides they take up minimum space.
I used cam straps to raise and lower them.
A couple of drilled holes and you’re done except for screwing in the bolts.

The angle of the J should help force the weight to the upright and the legs appear to extend past the width of the J’s. I found nothing in their info that stated you should put the heavier on the bottom, although that really seems better, Can you store the rack near a wall and add a tether to the wall?

String: I prefer not to hang the boats, either. I know it is more efficient use of space, but it would be harder to get kayaks up and down that way.

Yooper16: Good point about the legs/feet extending forward of the arms. The kayaks weigh within a couple pounds of each other. The rack will indeed be placed with its back to the wall, so I could add one or two tethers to it.

I may call Suspenz and ask them the same question.

I use a freestanding rack of very similar design (Malone?) and use it for 2 kayaks as you’re describing. No issues. I added one wall anchor for earthquake safety. I will say the one I’m using connects both support columns with a crossbar which keeps the width fixed even when I’m jostling 50lb boats.

I use the Talic kayak condo, three rack wall mount system. It is mounted to the wall. Works great. The misc gear fits in bins and stores below the rack. The trick is finding the wall studs to lag bolt the rack to.

Hey pikabike, in engineering this is called a “statics” problem because nothing is moving. In statics, the sum of all forces acting on a body is zero and same for all torques (twisting moments)…and both the forces and torques act on the center of gravity of the system.

So is it more unstable with just one boat on top? Answer is It depends on what kind of forces might accidentally get applied. With one boat on top the system is less stable to getting hit with a forklift right at it’s base because with one boat on top the cg is higher and there is a longer lever arm between the force at the base and the cg. But if you pull the top of the rack straight back it’s actually more stable and it would be easier for you to rotate the rack if there was just one boat on the bottom. It would not be hard to figure out the exact forces it would take to make the rack tip but in a practical sense it just doesn’t matter and you will be fine. For any forces applied vertically (like if someone wants to hang off one of the J’s) then it’s equally stable with one boat on top or one on bottom since the lever arm length is the same.

It sounds like you may not have seen that the racks come with hardware meant to be bolted into the floor. Most likely this is just so they don’t move around. It’s not hard to drill a few holes in concrete and add some fasteners. If you don’t want to bolt the racks down then I suggest you put something like a thin foam or rubber sheet (even Rubbermaid shelf liner) between the racks and floor to add friction. FYI in principle the racks will hold the boats just fine without being bolted down…for the racks to tip the centerline of the boats would have to get outside of the base of the racks (more than 24 inches from the upright bar) so it looks quite stable inherently.

If my feedback isn’t nerdy enough let me know and I can elaborate.

I talked to a Suspenz rep, who said the rack would be OK used as described. So I ordered one.

Mine stay here year round. 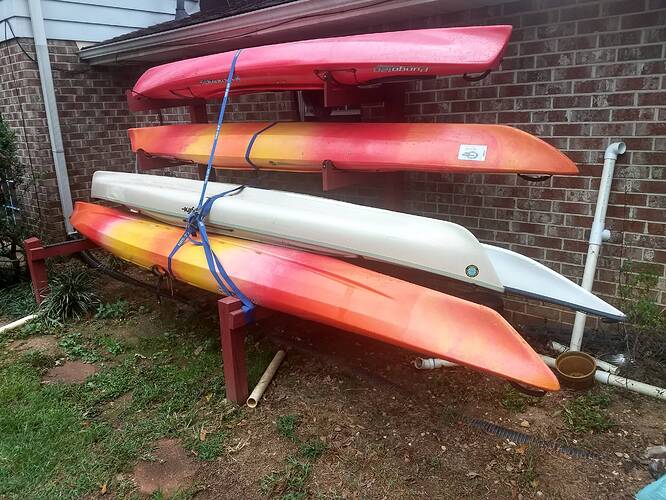 What rack system is it in your photo?

That is a String Rack System. My second. The uprights are set in concrete. They don’t have to be. My first one was consumed by carpenter bees, so this one is painted with paint for concrete, which they don’t like -much.
The lower boats are supported by 2x4 covered with strips of floor mat.
The arms for the upper 2 boats are made from doubled 3/4 " plywood which was profiled to the boat decks.
The decks rest on 1" kayak straps , not on the wood.

Thank you. I searched “String Rack System” but did not find anything like that. Is it a DIY or a commercial product? Do you have a purchase web page, or more specific search terms?

His name and rack name are the same I guess he made them.

Sorry, I am giggling over that!

Nice DIY rack, String. The boats resting on straps instead of directly on rigid arms (or on minicell) makes it different from most home projects,

It looks better than most DIYs, so I thought I should make sure (even though I did notice “String”).

Definitely DIY ; I am a decent carpenter and have seen many racks .
I got the strap idea from ads . Looked like a great idea, and is.

Suspenz service excelled. I received the rack quickly, with all parts present and unharmed, via FedEx.

Assembling the rack itself was very easy. Be aware that the two tools provided (a 1/2” combination wrench and an Allen key) suffice for everything BUT
tightening the nuts on the leveling feet. I had to grab an adjustable wrench from my bike toolbox for that.

What turned out to be a PITA trial-and-error process was adjusting the straps so that our kayaks would be suspended properly. I suspect the fussiness depends on the shape and dimensions of your kayak. Anyway, when it is dialed in, that should be all. I might tweak it a little but at least now there is no fiberglass-to-metal contact.

Removing the lower kayak while the upper one remained in place was doable without tippiness, whew. Now I am going to see how hard it is to do that alone, one end at a time onto a portage cart. The J ends will make it harder than doing so from having the boat sit flat on minicell foams.