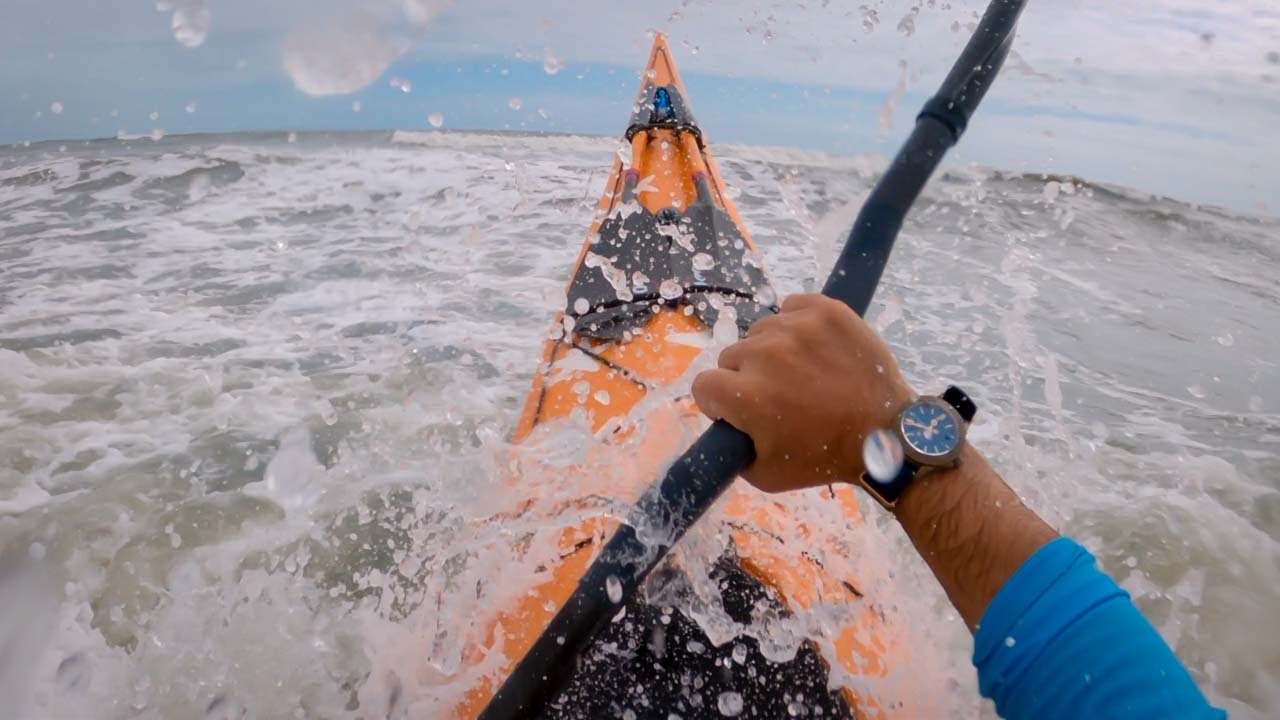 Flex tape would have worked as well, but removing it not so easy.

Didn’t look like all that much fun once he was in the water.

I admittedly haven’t tried it yet, but I have serious doubts about flex tape’s ability to adhere to a salt water and sand covered kayak hull. When I was shopping for the Eternabond I read reviews on flextape/flexseal on Amazon and they are overall not good. The Denso tape that my buddy had in the video also worked extremely well, but it’s is a beast to take off and leaves a brownish stain. Denso is asphalt based. The Eternabond adheres very well but comes off clean and doesn’t leave a residue.

Given it was seemed to be a day trip, I would have just filled the hatch with float bag(s) and headed in. I always paddle surf, rocks, etc. with one in my rear hatch, though it may not be fully inflated. Most people I paddle with also have them,such that we can sort enough out.

I am also a strong supporter of not paddling any boat that can’t take a beating. Not only any beating I could give it, but any errors in help a good Samaritan may do. One of the reasons I have no composite boats,

After watching the video, I wondered what the best approach would have been for that other paddler - the one who got the kayak thrown into his face by the wave.

Do not approach from down wave if there is any other option…there was. As happened, the overturned kayak was pushed into the approaching assist kayak which is when the puncture happened. The assist buddy is lucky the wave wasn’t bigger/stronger to rake across the length of the assist kayak in which case there would have been two paddlers in the water.

@kayakhank is spot on. In any surf, try to never be down wave of anyone or anything.

And flooded boats are particularly bad - they have a huge amount of mass that the wave energy will take and turn into a battering ram.

Never Cross the T, in the surf. Bad things happen. Saw a similar episode, at Matanzas a couple years ago. Nick got his Romany punctured, via a T bone rescue. Knocked a nice size hole, in his Romany.

It’s at Turning Point Boatworks now. Joey does great work and I can’t wait to get her back. Wave height never shows up well on camera - well on GoPros anyway. This was filmed with a Hero 8. Staying clear of other kayaks that day was the best call. I was in zero danger and did not need any assistance. Even my swim back to shore would have been easier with a buoyant kayak.

If someone had tried a rescue - even bow to bow pointed into the waves - it probably would have broken both boats or at least hands and fingers. These weren’t ocean waves or swell, they were spilling, churning breakers.

Excellent choice, he’ll fix it up better than new, so you can get out there again and practice that roll (I think you’d have made it if you didn’t spend your time drinking the ocean water).

With other paddler’s vast experience, he showed poor judgement.Regardless of the damaged kayak, he put you both in harms way. Not once, but twice. Both of you have way more experience in the surf, than me. But, I would have known not to come in, where and how he did. It was a recipe for disaster. Glad you both where uninjured.

Did TG. and you also do an inside patch? Did you go play again, or just surf and paddle back? Metompkin launch area is a good jaunt, from the surf zone.

Also, do you mind if I post this in a couple of forums? Definitely some teachable moments, to learn from.

I sent you a PM. Feel free to repost. No inside patch. The patching we did was pretty extensive - because the seam started to split we wrapped tape all the way around the hull. And well past the portions of the split seam. Inside the fiberglass was very jagged as you can imagine. It would have been difficult to even get a patch flat against it. Huge fiberglass splinters in there. We did put in a pair of paddle floats just in case it flooded. I was surprised neither of them was punctured.

After the repair I went back out to play in the surf. I babied it some, but that last part of the video is real. I figured that if it split and sank, then f’ it.

Thanks for sharing.
My biggest fear when swimming in the surf zone is other kayakers coming into the area haphazardly.
I’m glad no one was injured.
It’s something I’ve observed many times. I’m not sure why, but even advanced level sea kayakers really seem to struggle with distancing and positioning in rough water, whether just playing about, or in rescue situations. Sensory overload perhaps?
I think it’s one of those things that everyone should recognize as a potential risk, and videos like this should help to remind us.

My biggest fear when swimming in the surf zone is other kayakers coming into the area haphazardly.

yes.
I’ve risked losing (and have) the kayak in the water in favor of ‘saving’ the swimmer.
I kept distance - due to heavy breaking waves.
The swimmer retrieved important items (wallet) from kayak.
I paddled in with swimmer on back deck.
Went back out for kayak - but could not locate it.

That is why I surf with a plastic boat. It would have took that hit and been fine. Not sure why you thought you could reenter and roll since you didn’t roll up in the first place. Reenter and roll is some what harder to do.

Since it appears you have an easy beach to swim into why that other guy even offered to help you seemed like a real bad idea. I surf in locations if you come up out your boat you have a good chance in dying. No beach for me but cliff wall. Hence rolling HAS to be second nature. .

Glad everyone was ok.

Stupid to get down wave of of anything with mass, and don’t get up wave of someone either.

I, too, dislike other paddlers not keeping their distance in surf. In a class I took, one woman repeatedly got too close to me. I kept moving to get away from her, only find her paddling closer yet again. My impression was that she was the least skilled paddler of that group and she was deliberately clinging nearby in case she could not self-rescue. The problem solved itself when I went to the fringe of our area, where the funky waves got funkier. After getting tossed over by some of these—always rolling up—she stayed faaaar away from where I was. It was great practice, BTW, since at home I never capsized unintentionally.

Same as board surfing. People have to respect each other.