What causes a kayak to veer off in a random direction once it builds up some speed? When I say veer off I mean the kayak will make a sharp turn, but because of momentum it will continue in its original direction much like race car “drifting” around a corner. The kayak (a beat up Dagger Vesper, that I am restoring) is difficult to control at any speed but is absolutely uncontrollable when going fast.

It was supposed to be pretty maneuverable. Also for a smaller paddler.

How big are you? It is possible that there is a warp in the hull, but if you just got the boat l would guess the issue is in your paddling or match to the boat. According to the 1998 catalogue it could be outfitted with a tracking device.

Thanks for the reply. It probably is a both the kayak, and my paddling, but I am leaning more towards it being the Vesper. When I got the Vesper it was severely oil-canned in two spots and it took an afternoon with a heat gun to remove most of the oil-canning. It is obvious that the previous owner had left the boat outside on two supports (like saw horses) for a long time.

I had a friend (who has better paddling form) take it out on the water so I could follow and look at it closely. I noticed it had a habit of pulling to the left at low and medium speed unless turning strokes were used to keep it straight. It would also sharply turn in a random direction at higher speeds. Another thing I noted was that the V like keel (most of the boat is relatively flat) at the end of the kayak was only about an inch into the water.

I wonder if the keel is deformed…

Does it always turn the same direction? If not, then not likely a deformed hull.

Sounds as though it is a hull issue. However, though unlikely, it may be an unintended edging due to the way you sit/weight in the kayak or the seat being set slightly differently on the two sides. Just a different thing to think about since it is not an obvious cause at this point.

The craft certainly responds to edging… So that is something that me be a contributing factor.

There’s a concept called the “moving center” in boats. I think the technical term is peripatetic pivot point. Bottom line is that as your boat builds speed the center of rotation moves forward (so the bow does’t want to turn but the stern likes to get loose and spin around). It’s a real effect, I had a Bell Flashfire canoe and if I tried to drive it real fast it would eventually just spin out. My Swift Osprey solo canoe is also very sensitive to this effect…if it gets going real fast when being pushed by a tailwind it wants to spin out unless I slide the sliding seat way back. So in your kayak the thing to try is to shift weight rearward. Put a pack behind you or move the seat rearward if you can and you should see an improvement in controllability.

I. The Peripatetic Pivot Point – by clyde winter

Does it always turn the same direction? If not, then not likely a deformed hull.

At low speeds it always turns left. At high speeds the turn is random. There are probably multiple causes.

Although the hull looks straight, I could put chalk line across the hull to check for small amounts of lateral deformity. Unfortunately I have no way to know if there is any horizontal deformation (bowing) since most yaks have some upward slope at the bow and stern.

There’s a concept called the “moving center” in boats. I think the technical term is peripatetic pivot point. Bottom line is that as your boat builds speed the center of rotation moves forward (so the bow does’t want to turn but the stern likes to get loose and spin around).

That seems like it could be exactly what is happening! Next time I am out on the water I am going to stuff a 10-20# sand bag in the rear of the boat and see if its speed performance improves.

Well, Dagger says it is supposed to be quite maneuverable in their 1998 catalogue. Which means that it will do something like set up a bow wake at a lower speed than a faster hull.

It may be at that point it is more vulnerable to slight diffs in weight distribution or stroke.

One other question, are both you and your friend right handed? If so, as issues develop you will have a tendency to power the boat harder on the right than the left. Which will turn it left.

I am not discounting hull deformity. But it is probably a combination of things if it goes straight at lower speeds.

Does it have a skeg or rudder? If not, that might be the easiest way to get it under control.

It seems kayaks are proclaimed as either well tracking, which means they turn about as well as the Queen Mary II, or they are maneuverable

If there is enough rocker in the bow it will wobble on the bow wave. It will also not make that bow wave a long enough frequency to go really fast. Dagger has never been known to make racing boats…

If you try putting some weight behind you please let us know how it turns out. I’d encourage you to go for 20 pounds or more…in my 15 foot Swift Osprey solo canoe I have to slide the seat back 4-6 inches to make a good difference in tailwinds and that’s a pretty big weight shift.

One other question, are both you and your friend right handed? If so, as issues develop you will have a tendency to power the boat harder on the right than the left. Which will turn it left.

Thanks for bring that to my attention. It does produce considerable bow wake at medium to fast speeds. Keep in mind I have never used a performance kayak so my “speeds” are relative to sit on top rec kayak speeds. The pulling is small and to the left at low speeds. At medium speed it is large and to the left. It even glides (as in when I stop paddling and let momentum take the craft) to the left.

Although the hull center line looks straight to the naked eye, I decided to put a chalk line across it. What I discovered is that there is more than half inch of bend )
So I think that may be why it likes to pull to the left at low speed.

I test paddled a boat that spontaneously turned left like this. It had been stored on top of a station wagon outdoors, tied to the cross bars, angled to the left. The bow and stern lines apparently created a permanent bend, it was about 1/2 inch also, if I remember correctly. I didn’t notice the bend initially, but checked afterwards due to its behavior in the water. The owner claimed not to see the bend, and I did not buy it - neither the boat nor the claim.

The keel is what keeps a kayak tracking in a straight line. The longer and deeper the keel, the easier it is to keep the boat moving straight. Take a look at a whitewater playboat for contrast. It has no keel and will spin like a top on flat water. Most touring boats have deeper keels at the bow and stern, which also helps them go straight. When you lower a skeg, you are essentially making the keel deeper at the stern of the boat. Weight distribution can have the same effect, to a lesser extent. Generally speaking, you load your heaviest gear in the stern hold of your boat. If the keel of the boat is deeper at the center than at the bow and stern, it will not track straight, which is what I suspect is your problem. Your keel is warped, The deepest point of the keel is a fulcrum, and if it’s at the center of the boat, it will continually turn on you, and the faster you go, the more it will turn. Sorry, but I have no idea how to fix this.

Thanks this is something I wanted confirmation of. From having watched as a friend paddled it by me; The keel has little surface contact with the water. As a quick fix I have fabricated a skeg from some polystyrene board I had on hand. Depending on how that goes I may look into reshaping the hull to be as close to its original form as possible. Of course that would require me getting an idea what a Vesper hull is supposed to look like. 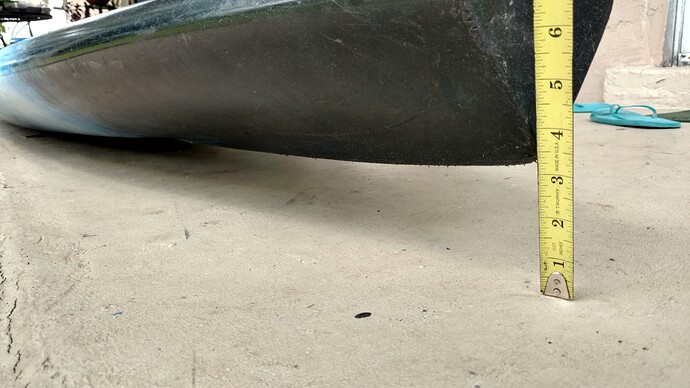 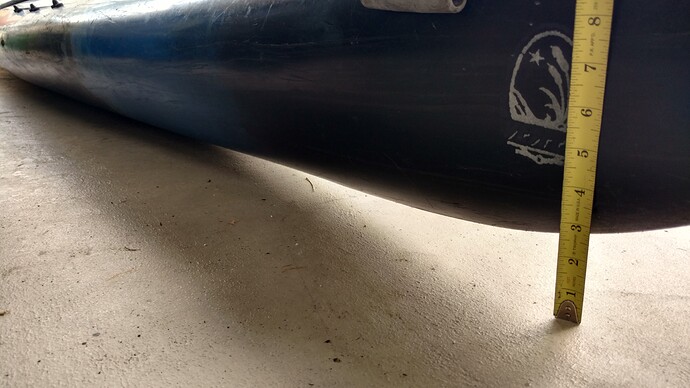 You would have to check with the manufacturer. What you have, intentional or not, is known as rocker. Boats that have a flat keel, where the entire length would be on the floor are boats that are designed to go straight and relatively fast. They are hard to turn quickly. A rockered boat where the bow and stern curve up on the other hand is designed to be very maneuverable and turn quickly and easily. It will not be as fast and harder to paddle straight. It’s a bit better for winding creeks than doing distance on open water…The old Necky Arluk 1.9 and Lookshaw were basically identical 18’ boats, but the Lookshaw had a rockered hull and the Arluk did not. It is possible that this was an intentional design feature. I’m not familiar with that boat.

A most troublesome possibility is that it was stored in a very hot environment supported only near the bow and stern for an extended period of time. Plastic boats can deform in there conditions. More typically in these cases you would see indentations in the bottom of the boat where the supports were, although possibly not if it were hung by straps. . Check ti see if there is any deformation in the center of the boat near the top of the hull.

Did you see the reviews on this site?! Lots of comments about lack of controllability and turning left. One post suggests it was due to worn out tooling, meaning the hull was deformed when it left the factory.

From everything I have read, it appears that the Vesper was designed as a stable, fast, and maneuverable kayak. Many of the reviews of the vesper praise it for its speed and maneuverability. Some disparage it for its difficulty to control and weight sensitivity. With additional research into hydrodynamics and kayak design what I have come to believe is that the Vesper was designed as a finely tuned compromise between speed (from length, V bow, and rounded center hull) and maneuverability (from rocker and shallow keel). In order to take advantage of its speed you must use good form, small but rapid strokes, and be very mindful of weight distribution. In order to maneuver it you have to shift your weight and use the rocker of the boat to help you quickly turn.

Unfortunately the Vesper’s conflicting design elements are balanced on a thin margin. That is to say they only work well for a kayak that is in good condition with a rider who is on the lighter side and who can paddle with skill and good form. As a new paddler who bought a neglected 20+ year old kayak, I have found kayaking to be … challenging.

“The greater the challenge the sweeter the victory”
All of my Vesper’s problems seem fixable and I have already:

Now its time to take it on the water and see how well it performs!