I am trying to find the best Kayak to use with my Newfoundland. Most kayaks have the sitting place in the back cannot see him that way. Concerned about weight also. Would love feedback from another dog owner. Thanks

What sort of paddling are you doing? Going to need a lot more context to offer a decent recommendation.

I don’t think it exists. Think canoe or jon boat.

Paddling with a Newfoundland I’d want a canoe. That way the dog can lean when he sits and even lay down and not immediately capsize the boat (probably). A dog that size, even a tandem kayak would be small for it.

I took my Std Poodle out in the tankwell of my Tarpon 160. We were fine until she put her weight on the edge and a little wave happened by.
It took 2 of us to get her back on board and she was less than 50#.
You might get your Newfy in the cockpit of a big rec boat but where would you sit?
I also had her out in a tandem canoe. No problem. 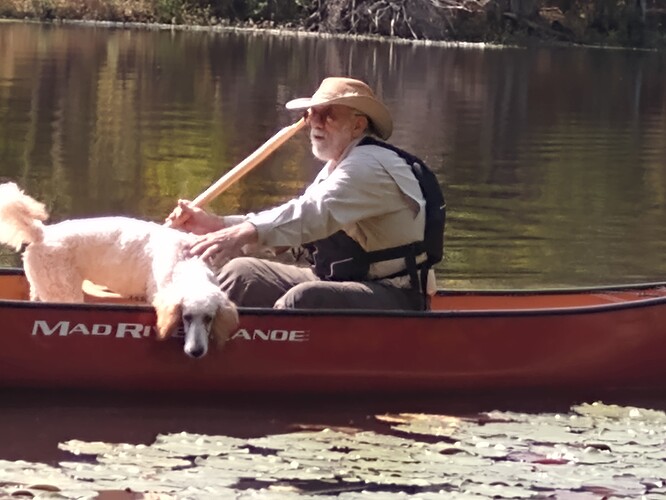 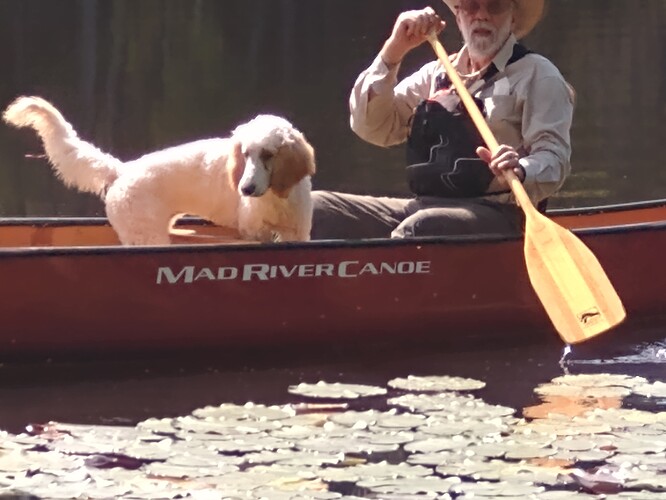 I’d forgot what sort of dog a Newfie is until I saw some of the other comments. Yeah, a wide tandem canoe or a big raft would be my recommendation. I’ve got a 40lb heeler that sits in front of me and when she switches which side of the boat she’s looking over we will immediately list to that side a decent bit. Though it does seem more pronounced in the solo canoe where she has more room to move away from the centerline (I’ve also had her out in 10’ and 12’ rec kayak. I’d imagine with a dog three times her weight you’d want something more stable than you’re doing to find in kayak. The possible exception being some of the fishing/sportsman owned sit on top kayaks that are out there.

The other factor to keep in mind when paddling with a (very) large dog that likes the water - eventually the dog will end up in the water and you’ll have to get it back in the boat. Think through how that might work in the craft you choose.

That’s going to be a return to shore and reload there situation. I can’t see you hauling that big a dog up out of the water without capsizing.

I can’t either, so that might severely limit where the OP can paddle with the dog.

He said calm lakes so I don’t think it’s going to preclude him from safely paddling too many of the places he might be envisioning. Keep it within 50’ of the shore and there shouldn’t be too much trouble for the dog to swim to land. If using a SOT it shouldn’t take too long to self recover and get back to shore.

It’s a Neufie. If they capsize the dog will just rescue him, no big deal.

Klepper Aerius double. Find on Craigslist or even eBay

Thank you Chuck your the only one who’s been supportive.

Sorry if it sounded like I was saying you shouldn’t give this a go. To be fair I don’t think anyone was saying you shouldn’t go paddling with your dog. Unfortunately your question is a bit like asking “which compact car should I buy to haul lumber with?” There’s just not really a good/easy answer we can point to that doesn’t carry with it substantial risk of being a easy to capsize. And I can’t speak for everyone but I wouldn’t want to point you towards a specific option knowing that you are likely to be frustrated with how easy it rolls over because the pup decided to move a bit further than a person would know not to.

Best option if you aren’t interested in a canoe, in my opinion, would be a 12’ (ideally 14’) sit on top sportsmans kayak (since they tend to be wider and more stable) or a tandem like an old town twin otter with some sponsons/outrigger added to it to keep y’all from taking an unwanted swim.