I have so many questions. I owned a sit in kayak when I was younger and thoroughly enjoyed taking it out on our local river. Now, I’m a bit older and I have a 5 year old son that I’d love to take out on the lakes when we go camping. Problem is, aside from it being a sit on top, I’m really unsure of what kind of kayak to get. Adding to the dilemma, I’ve been tossing around the idea of getting a canoe instead. I obviously want the safest option for my son but I’m not too sure if that’s a kayak or canoe? I also want to feel comfortable paddling it by myself because, at 5 years old, he probably won’t be too much help. However, it would be nice to have something he could grow into as well. I really appreciate any advice or similar experiences paddling with younger kiddos.

A canoe is a very suitable craft for kids and dogs. I have been on one week long trip with two kids around 7 and 9. They did great and were not much trouble.

My son (5) does fine in either. In the canoe I gave him a paddle and just based what I’m doing on what he’s doing.

On the kayak I got him a pelican solo and after dragging him around the lake a bit (he paddled his way besides me a couple times) I set him loose and he figured out steering in minutes.

Sit on top kayaks are great. You can jump off and swim and climb back on. No worry about sinking

I’m definitely leaning more towards a SOT kayak, because it’s what I’m familiar with using. Do you think I should get a tandem and muscle through solo paddling? I was really hoping to find a solo kayak that would be safe for him to sit on with me. This way, if he ends up loving it, we can work towards getting him his own rather than always having to paddle with me. Do you have any recommendations on make and model? I’ve tried looking through similar past posts on here but it seems every suggestion is no longer around since the post are older. I sincerely appreciate the help.

What type of canoe are you using?

Look for a tandem that has a 3rd center seat to paddle so!o. Perception Tribe 13.5 is a great boat, but pricey

Depends what you are going to do, and what you want for the future.
SOT’s are fine for day trips etc… and good for getting into water if it’s warm… not so much if its chilly.
I put a second seat into a solo canoe I already had, and that served us well for a couple years including a trip down the Missouri. I could still take the boat out solo, and when my son outgrew that situation, I removed the seat, capped the holes, and done deal.
I took him down the Missouri a second time when he was older in a tandem canoe, and pulled his little sot behind when he wasn’t using it. Kinda touch and go… if the winds had been really bad it would have been tough for me in that big canoe solo.
Inflatable kayaks are great fun too… solo is fine until they are older, at which point they will want their own boat.

Quriser took the five year old granddaughter out in our tandem sit inside kayak. Grand kids is 5 but a little small. You could see head n shoulders…not much else. Was better in the canoe.

Be sure that whatever you choose that everyone is wearing a PFD. To be able to help your kids, you want a PFD. There are too many stories around here of kids being OK when the parent who just threw the PFD in he boat was lost.

I used to put a tiny camp chair toward the middle of the canoe when my son was five. My daughter being older (6 1/2) got to sit in the bow. Stadium cushion seats can be rigged up and used as well. Taking turns is important to kids so they had to switch out at times, and be sure to give the middle paddler a job: like counting the number of alligators, using a map for navigation, or reading a gps to tell us how far we have to go.

whichever way you go, get something your son can “help” paddle. My son started at 5 as well, I had a 15’ Dagger Reflection, and he had his own downsized paddle. At 10, he asked if we could bring 2 canoes for our after-work paddle, and it was his first time soloing. In the following 1500 outings we tandemed 4 times. By 12 he was a better single blade WW paddler than me and my friends, which led to some free canoes and whatnot from some of the elder statesmen in the sport.

Encourage them to paddle when they are young so they are not just dunnage in the bottom of your boat. We were doing overnight trips by age 11 in the Boy Scouts. We started way before that. We did our first week long camping trip without adults at age 12 on an island.

If your 5 yr old is a decent swimmer, a SOT and him in a PFD could be easier than you think. There is a local small lake with a youth camp of some sort near me. We often have used this spot for rescue work. We have seen the kids get let loose on a variety of rec boats, and they don’t stay on top of the boats for more than 40 feet. Most are jumping off the boats by then. The drag them in and do it again.

I did safety for a demo day a couple of times and experienced the same. The young kids would wobble out from the dock having promised their parents they would behave.and be careful. But the minute the parents stopped looking, a number of these kids were in the water having capsized their boats on purpose. It is where I learned the impossibility of rescuing a rec boat on the water w/o float bags in it by myself. The kids were easy, clambered up on my back deck and I had to look back to make sure they were even there. The boat was another matter.

Kids need to comfortable in and on the water. They need to wear a life jacket as soon as they get out of the truck. Practicing rescues teaches everyone what they need to know. Kids like the idea. Adults are harder to convince.

Back in the 1990s, we did a trip to the Green R in Utah. We brought my friend’s two kids around 8 and 10. The first thing they did was jump in the river and they got overwhelmed by the current. We dragged them both out because we were paying attention.

The same year I was on a friend’s power boat. We stopped along a steep shore. My friend’s 9 yo daughter slid down the bank into the muddy water. No one else saw her. I went in after her and dragged her out. She was not much of a swimmer. Put on their lifejackets before you do anything else.

Yep, here is an example of a decent but with out bulkheads kids kayak. In this case, after the demonstration, we parked the kayak and he used one of the fleet Tsunami SP kayaks. 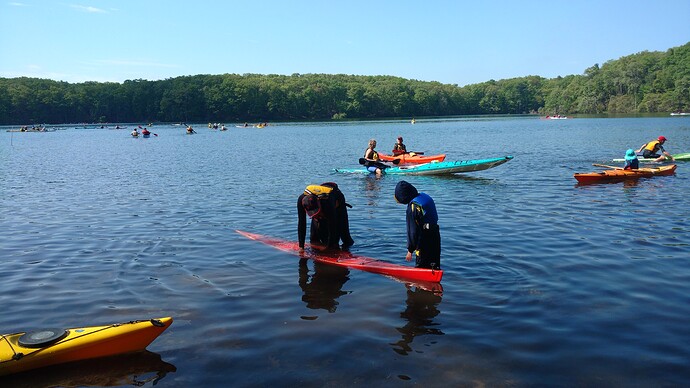 Kids (of all ages) will play in water. It’s best to plan for that expectation. besides it can be a heck of a lot of fun. 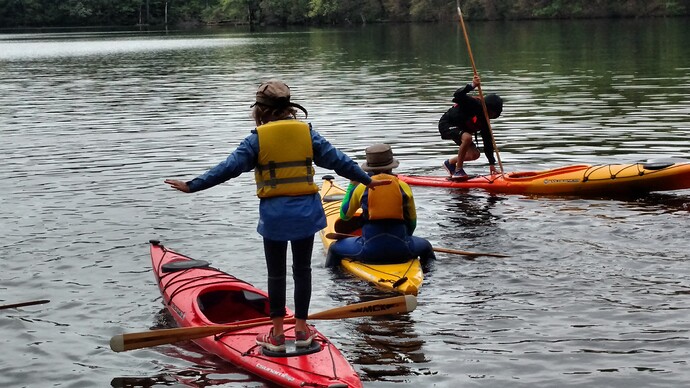 Sometiems it can be hard to tell the “short” kids from the “tall” kids. 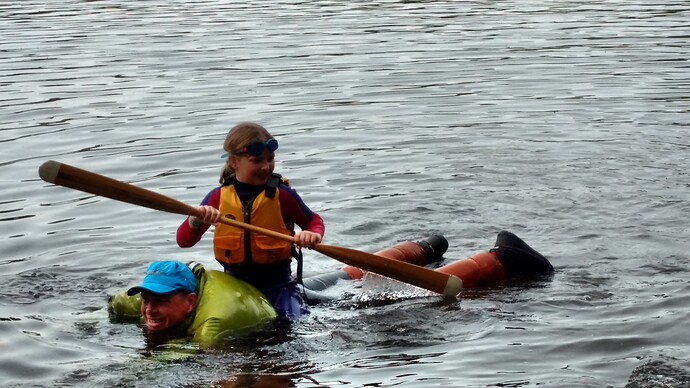 These are my favorite kinds of photos. Kids get to mess around and learn what happens when boats capsize and get filled with water.