Kayaking the canals of England

I and my adult son are booked to spend May 14 - June 18 paddling England’s inland waterways with our folding kayaks, camping along the way. I am looking for suggestions, advice and even company or a place to stay - anything that can make the trip more interesting or affordable.

There’s a book called something like England From One Inch Above the Thames, by an American guy who paddled the length of the Thames (with a significant side excursion on canals) in a kayak, without knowing, most nights, where he would lay his head, until he got someplace where he might or might not have planned to get, met some people, and figured out food and lodging. It’s not mainly a kayaking book, more like a story-of-my-adventures book with a kayaking angle and with lots of philosophizing and historical tidbits. Even though he wasn’t mainly on canals, I suspect you could have a similar experience if you wanted the uncertainty and adventure. He’s the flexible and resilient type, willing to surmount obstacles like fences with No Trespassing signs on them. Might not be your style, but his luck was almost entirely good, and even when it was bad it wasn’t that bad, not nearly as bad as you might have by trespassing in America.

And it turns out I still have my copy, not having sold it, as I believed. Jim Payne: Discovering England From One Inch Above the Thames. I’m happy to give you my copy if you’ll make it easy for me.

He gets several pages out of the fact that the sign didn’t really say No Trespassing. It said, Sorry, No Mooring, Please. He compared it to a sign in Idaho that said, Is There Life After Death? Trespass and Find Out!

I live near the Kennet and Avon canal in the Somerset area, and this is one I would recommend, An unmissable trip is to to paddle across the very narrow and high aqueduct at Pontcyssyllte near Llangollen, North Wales.https://www.pontcysyllte-aqueduct.co.uk
As regards camping, a Google search reveals :
http://www.ukcampsite.co.uk/chatter/display_topic_threads.asp?ForumID=4&TopicID=264094
Also, if you download the map of the canals of the UK :
http://www.jim-shead.com/waterways/mwp.php?wpage=Inland-Waterways-of-England.htm
You can then Google “camping on the xxxxxx canal” and you will get plenty of information.
You should have a blast.
Nick.

The upper Thames, Kennet & Avon - there are quite a few lovely canals/riverways to paddle in England. I used to use the Cycle Touring Club’s “Cyclists’ Britain” book for roads & trails, which might not seem to apply to you, but it could. It used the famous Ordinance Survey maps, which includes the waterways, and it gave advice on sights, places to sleep and eat cheaply. Worth a look. Have a blast!!!

whole forum of paddling from the UK…

I haven’t paddled it, but I boated down the Thames from about Reading to just below Tower Bridge. if the rest of the canals are similar, you will hit a lock every 4-5 kilometers. You can lock through or most had byasses where you could easily portage (some had rollers to make the portage easier). Conditions on water would be pretty easy - really no moving water or waves and you won’t ever be far from shore.

The river is not tidal until you get into London (I think it was around Twickenham). Above these, the locks limit height variations and currents. Below, we some some very significant currents due to tides. 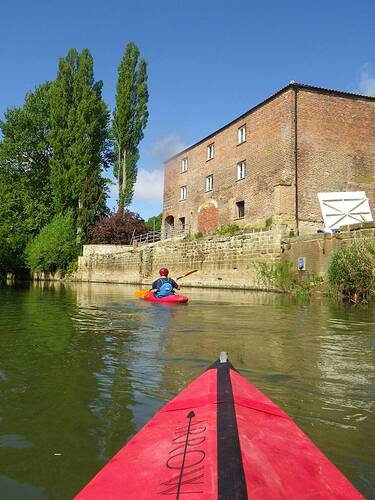 768×1024 128 KB
I just got back from my 12 day trip to Yorkshire and had a great time paddling the Rivers Rye and Derwent with the Malton & Norton Canoe Club. I had taken advice given on here and enrolled in and posted on the forums for “Song of the Paddle”, the Brit paddling site. I got multiple responses immediately after introducing myself on there and they were all most welcoming – in fact they would have loaned me boats and gear (though I brought my own folding kayak and full kit). I switched to a tandem canoe for part of the second day. We did a half day outing on the River Rye and then a full day from the Rye to the Derwent from Malton down to historic Howsham Mill. If you make it up that way, definitely contact them through the SOTP site – great club and very active, with their own boathouse, parking lot and launch dock, right on the river in Malton 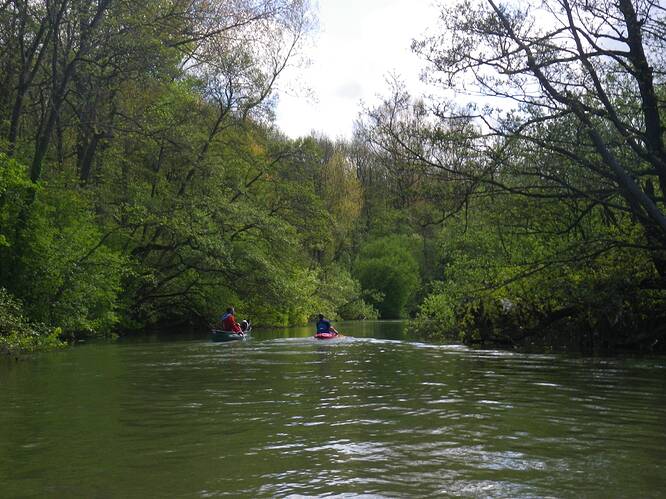 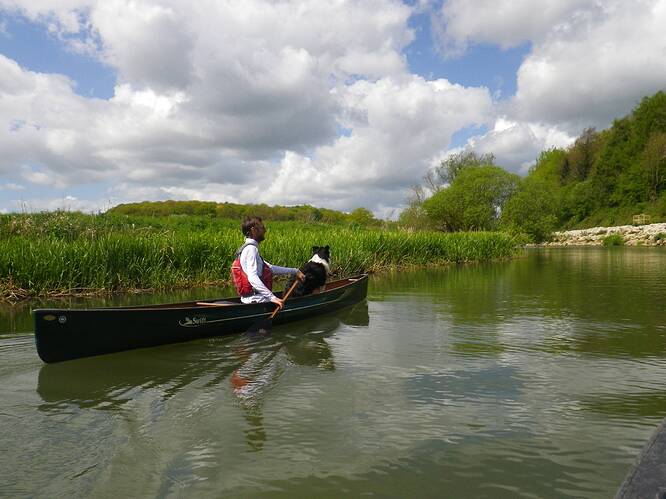 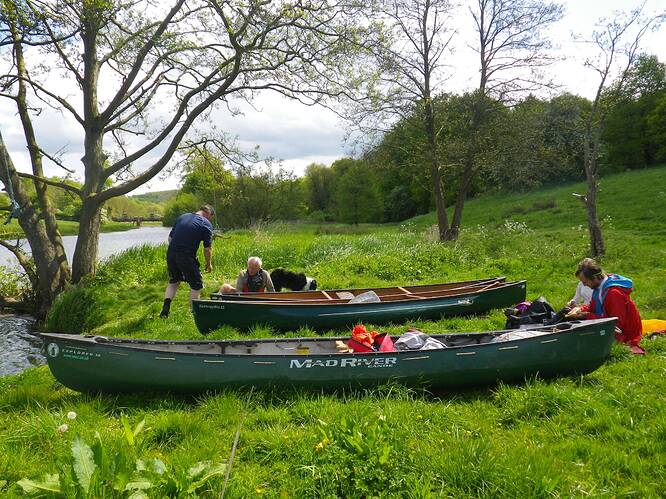 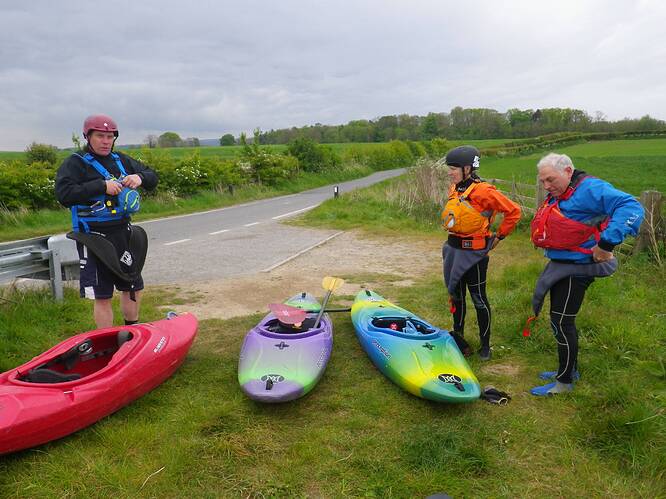 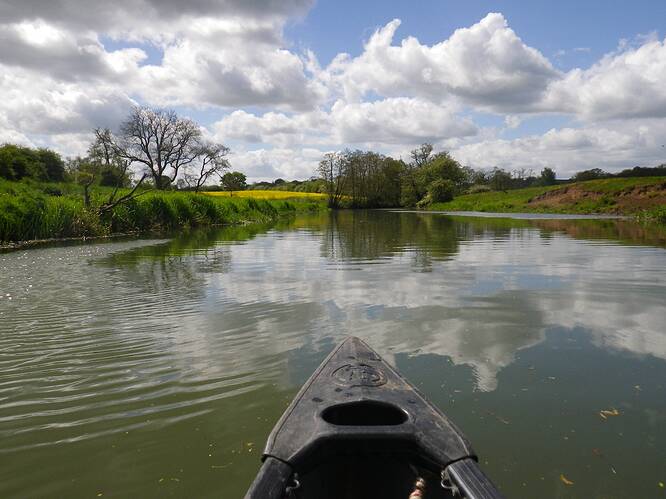 Looks like it was a great adventure, Willowleaf. Lovely photos and scenery. In the on-shore photo with the Mad River in the foreground, what’s hanging from the tree behind and to the left of the pup?

We Brits have a penchant for dangling ropes off trees near water for kids of any age to swing out over the water while sitting on a limb such as you can see at the bottom of the rope. Letting go of the rope at the critical time and plunging into the water gains maximum points.
Nick

Nick has the answer, Rookie. Paul Lister (the Canoe Club member who organized the trip) lives on the Derwent halfway between Malton and Howsham, right there where we had stopped for lunch (and where I left my kayak to switch to paddling the tandem canoe with his dad, who we picked up there.) Paul’s kids had strung up those branches tied to rope to swing out over the river and dive in.

One of the cool things about paddling in Yorkshire (and I understand this is common throughout Europe) is that they build out the small dams into weirs that are designed to allow paddlers to descend them with relative safety (you do need to understand the conditions of the weir in each circumstance). The angle reduces the treacherous re-circulating “washing machine” hydraulics at the base of the waterfall that is found below standard low-head spillway dams. This is one of the two weirs on our Rye to Derwent trip, though the water was lower when we did it. I portaged my 22 pound folding kayak around them though, because the soft bottom would have just dragged with too much friction due to the low water. 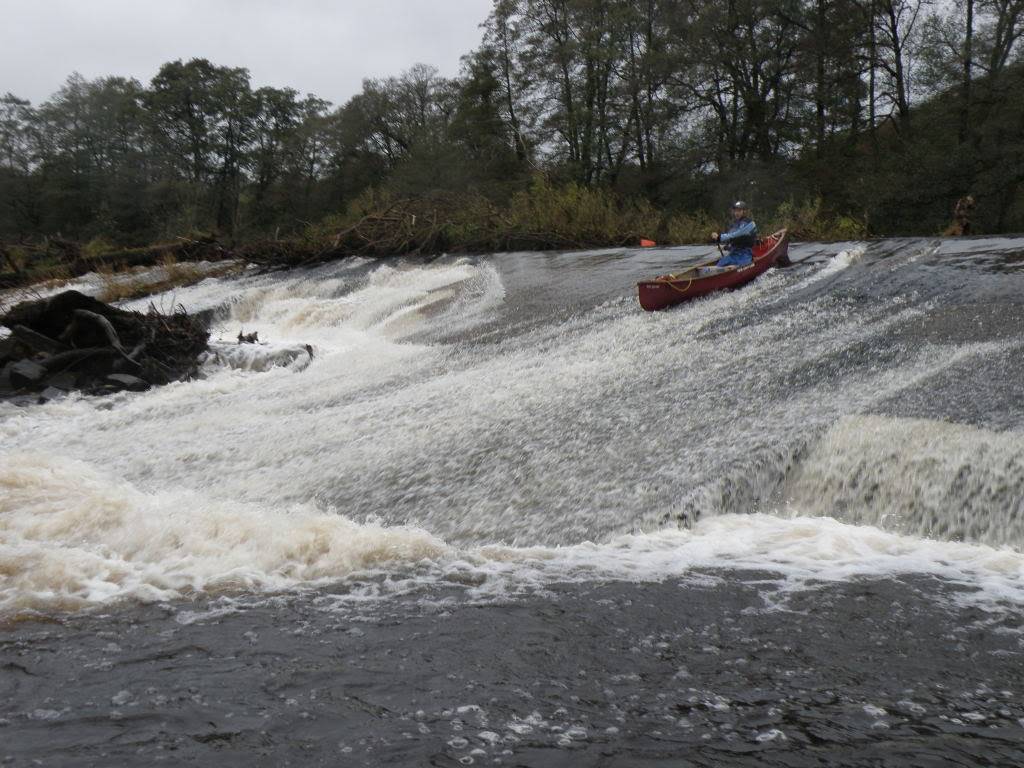 When I first looked at it, thought it was an antler hanging off a rope!

That British tradition is quite popular here and loads of fun so long as you don’t wind up on “America’s Funniest Videos.”

They also built a whitewater slalom play park in the run-out rapids below the restored Howsham Mill on the Derwent. Howsham is a medieval grain mill that was restored in 2013 to become a community center and they converted the paddlewheel to drive a generator which, combined with a pair of Archimedes screws in the spillway, contribute 30 kW per day of green energy to the national power grid, enough to power 30 modest homes.

Brits seems to be very devoted to enabling optimal local outdoor recreation of all kinds and build hiking trails and paddling access throughout their landscapes. (I shot a short video of the slalom course but the file is too big to upload). 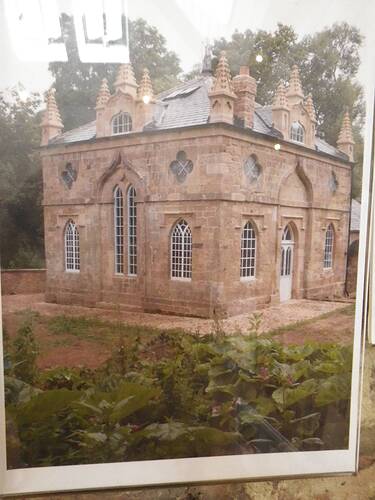 here’s a better shot of the weir at Howsham (with historic site Kirkham Abbey in the background). They built in a notch in the middle that creates the smooth vee down which boats can slip more easily. Unfortunately, the day we crossed it that was blocked by a large snag we were unable to dislodge so our party dropped over just to the left of it by slipping the canoes and kayaks over the sharp drop sideways and pivoting. . 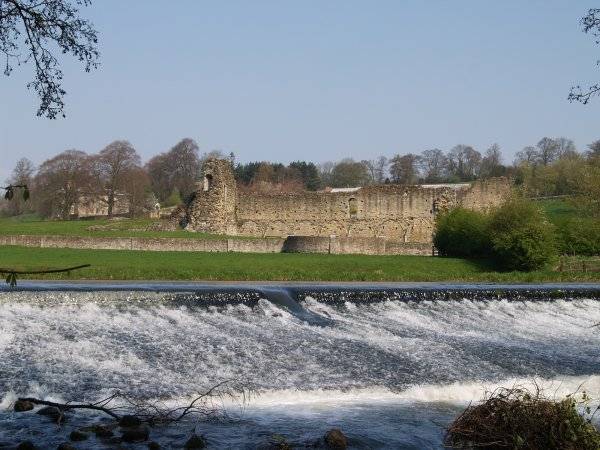 Blimey, looks like you had a blast…And If one didn’t know better, I can see where those weirs might appear “dodgy” at first. When I looked at your pics earlier, I was wondering about the blokes and the bird who were using the whitewater yaks(Like, skirts and helmet for a canal?) Anyway, thanks for sorting that. Throw in a good pub afterwards, and I’d have a go at the itinerary meself!

Also, not British, but I always try to take a couple of wee border collies with me when I boat… 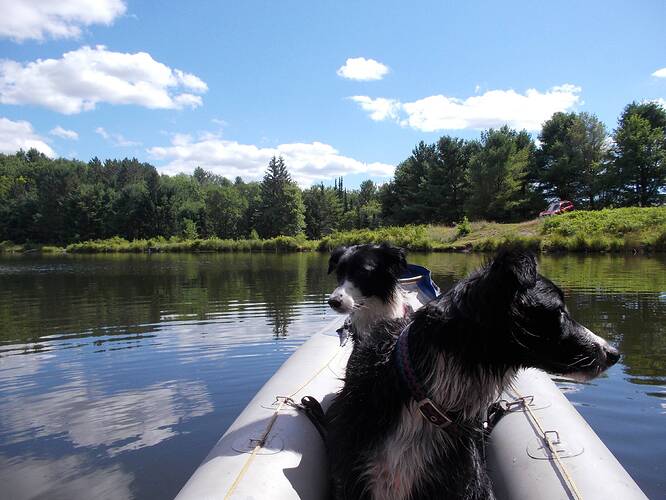 Cute pups! The folks with whom I paddled there often do whitewater, so I think they just have the habit of wearing the helmets – also, it started raining just as we put in that first day and it was rather chilly, so I think the skirts and helmets were more for warmth and wetness protection than safety… We only had one very tiny class 1 rapid, right at the start. On the second day it was much sunnier and warmer and Paul (the only one in a kayak besides me that day) did not bother with either skirt or hermet until we got to Howsham Mill, when he donned both to play in the slalom rapids park behind the millrace.

There are lots of options to finish your paddle or hike at a pub in Yorkshire as every tiny town and crossroads has a “local” – excellent beers there! Especially my favorites, brown or red ales. In fact, here is a shot of just the lagers and ales selection in the vast beer aisle in the local grocery store and one of the entire aisle (one sour note there – Coors Light in the foreground, which is not really beer.): 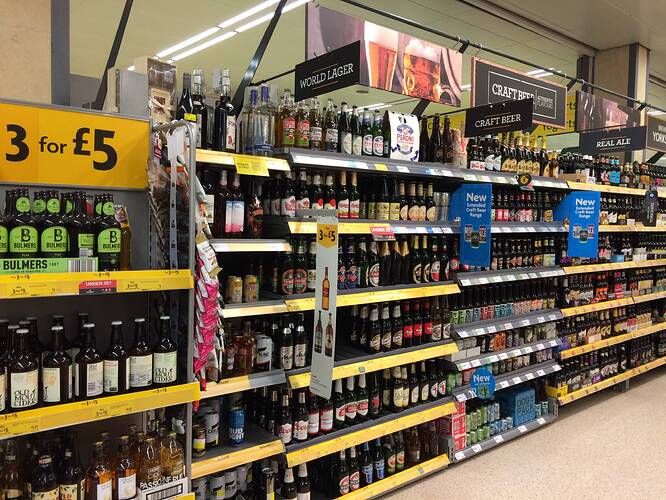 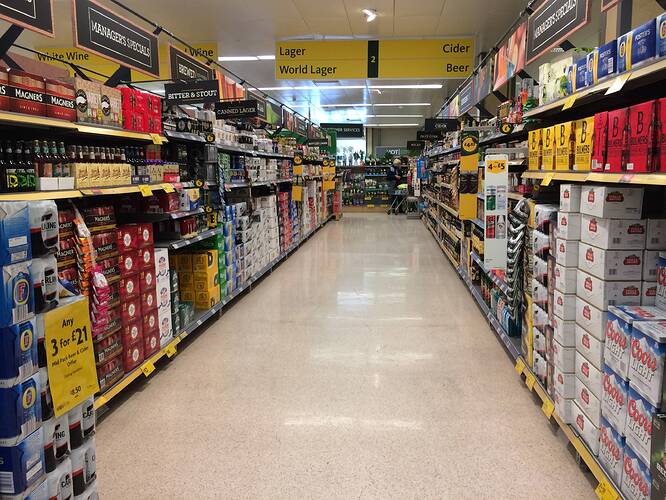 The Yorkshire folk are also SERIOUS tea drinkers, as evidenced by the “family size” of the favored local brew (which has been a favorite of mine as well since I first visited Yorkshire 20 years ago). I certainly pay a lot more for it over here that they do in the home country: under 10 quid (about $13) for 480 teabags!! 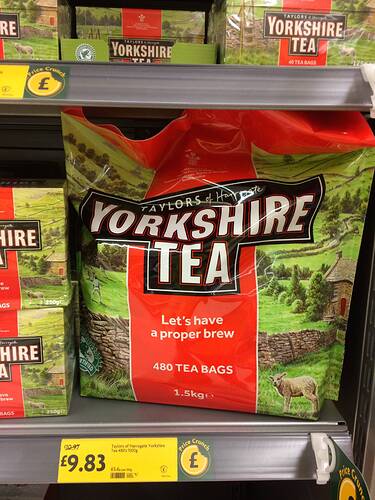 Actually, you can walk right out to the lip of the weirs and even walk down the ramp, at least at the flow rate when we were on the rivers. One of the pack canoe paddlers just walked his down and jumped back in at the bottom. I’ve seen pictures of weirs in France where they build the small boat “chutes” along one or both sides, leaving the typical steep dam drop in the middle.

I favor “Lord Buckley’s Tea,” myself–But I understand it’s become harder to find even in England.