Anybody have experience on Tomales Bay in California? I’m more of a flat water paddler - sloughs, etc. So curious if this is more like open ocean/bay or flat? Thanks.

My son and I paddled Tomales back in 2010. The bay was completely flat the entire 3 days we were there as it is a long, narrow bay protected on 3 sides by mountains. We put in at Nick’s Cove and paddled SE across the bay to set up camp on one of the beaches. The only rough water we experienced was paddling out into the Pacific at Tomales Point where we experienced 5 ft. rollers and a strong wind. Saw lots of seals and several otters - lucky no Great Whites, as we were told it has one of the highest concentrations on the west coast. Absolutely a beautiful area. 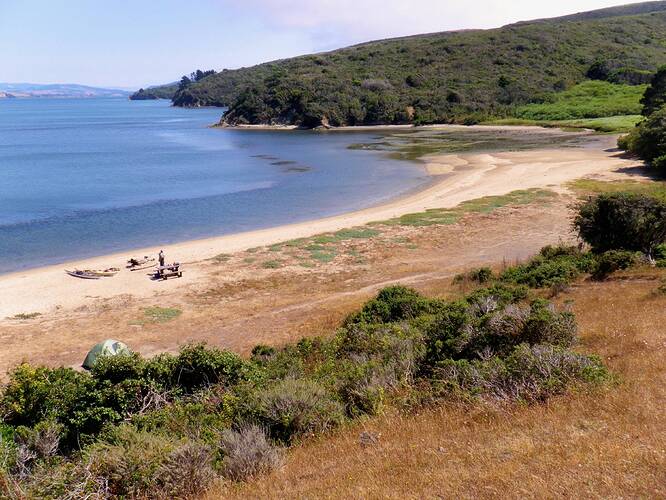 I was there a few years ago and I agree it’s a beautiful area. I intend to return, possibly next year. Conditions are generally benign due to its fairly protected location, unless weather is challenging. You might take a look at Schumann’s & Shriner’s book, Guide to Sea Kayaking Central & Northern California for useful details.

Generally flat water, but that said, in the Northern CA area, Tomales Bay probably has the most kayak incidents and deaths of all other areas. Probably average at least a death per year. I think because it looks protected, people let their guard down.

Winds are known for picking up. Here is an example: http://sanfrancisco.cbslocal.com/2015/09/13/marin-firefighters-rescue-54-kayakers-tomales-bay/

There are currents in the bay - more so near mouth than further in. People have been sucked out into the breaking waves at the mouth (and beyond) before. Real strong when you get to the narrow area near Lawson’s Landing/Dillon Beach, and just outside of that is the bar area with breaking waves. Dillon Beach is known as a good place for kayak surfing.

All of this on water that is rather chilly, so reduces the time you have should you make a mistake. Temps are in the 50s year round.

Nick’s Cove (mentioned above) is a common launch point. Chicken Ranch Beach and Heart’s Desire Beach (both on Inverness side) are also common launches and further in away from currents. Might be a launch at southern end at White House Pool Park (never tried, but looks like it).

Tomales Bay is most know for bioluminescence. Both local operators, Blue Waters and Point Reyes Outdoors, do evening tours on moonless nights to see this phenomena. Tomales Bay is also an area that you could possibly see bat rays and/or leopard sharks.

For a slough-y experience, on a high tide you can launch and Chicken Ranch and go south and go up the slough and work you way as far up Lagunitas Creek as you can go. You should be able to get past Highway 1. This creek does support a run of Coho salmon, so if you time it right, you may see some fish heading upstream.