We are visiting Orlando in late September taking our inflatable kayak.

Could anyone suggest good places in the “Disney” are to go out kayaking. We do not know if you can self launch in an area where there are rentals available.

Also, is it safe to go in an inflatable kayak where there is a possibility of alligators? (sorry if this is a stupid question, but we don’t come across them in the UK)

Many thanks for any help/advice.

Wekiwa River is fairly close…
and a neat place to paddle.

There is a state park there that has a nice place to launch.

I wouldn’t hesitate to paddle a blow up around gators.

Give the large ones the right of way, and the smaller ones will move out of your way long before you are near them.

Rock Springs Run to
Wekiva Island is a wonderful paddle. Just be aware do not swim on the river. You can go swimming in the protected spring area which is gated to prevent gators getting in it.

I have been there several times and had no problem with gators but I stay in the canoe… Wekiva Island is a party area and I don’t know how many people feed the gators there but just stay out of the water there. I don’t know the cause of the attack.

Blackwater Creek is another good area but you do need to get a permit ahead of time from Seminole State Forest. Its very intimate and very devoid of people. Main launch is on a sand road after a bridge and its a decent launch with sufficient parking.

You can launch at Kings Landing. While they run a livery they allow launch of private boats to do Rock Springs Run,

We disagree. We agree to disagree !

I’m involved in animal behavior research with some gator experience.

My opinion is inflatable boats and alligators are incompatible

Currently we bipods are in deepwater with carnivorous marine life.

Orlando Paddling
I live just north of Orlando. My favorite spot is Blue Springs state park, paddling around Hontoon Island (just over 9 miles). You will need a map.

Drive an hour to Canaveral Seashore (launch at Eldora at Mosquito Lagoon and paddle to Orange Island and vicinity). Often see manatees, dolphin and more. Good fishing. Eat at JB’s fishcamp on your return.

If you want to drive a few hours north then Silver River, Juniper River and Alexander Springs are also nice destinations.

Canoe rentals can be found
in Florida at almost all popular rivers including the Withlacoochee, RSR, Juniper Run, Silver River, Santa Fe,

Not sure about Blue Springs but I think so. Snake Creek there is really pretty.

So consider leaving the inflatable at home. My big worry is it would leak with over inflation. The sun is hot.

Shingle Creek
Close to the attractions and a pretty place to paddle among tall ancient cypresses.

You can launch your own boat there without a launch fee. Nice launch, restrooms available. Just off a busy highway but in a few minutes you’re in another world.

If you have a full day to go paddling, google King’s Landing in Apopka for information about paddling Rock Springs Run and the Wekiva River.

Kayak and canoe rentals are available at Wekiwa Springs State Park, or you can launch your own. Yes, there are gators.

Datatroll…
Have you been to Florida? Your knowledge of geography and local conditions suggest otherwise.

Are you suggesting that FL isn’t buggy
that is not a nice thing to do to visitors… we don’t want them to get nibbled to death by thousands of tiny air-born blood suckers, the Daily Mail already has enough stories about bears eating people in Yellowstone, kayakers getting offed by their crazy Russian girlfriends for insurance money, my state’s forests going up in flames, etc.

To the original poster… the insects near some water areas are nearly unimaginable, unless you’ve already been to the tropics or semi- tropics. The beaches on the coasts are okay. The cities are okay because they spray. The rivers and swamps may require the use of insect repellants, long sleeves and pants, and fine mesh netting for outdoor activities during peak blood sucking hours at late afternoon and dusk. For reference, my earliest years were literally spent living near a bay swamp in a temperate climate, so I know what bugs are, and Florida is in a class of its own.

Here in the states we can buy essential oils like tea tree oil, citronella, oil of lavender, mint, etc and mix up our own solutions of a few drops of oils in water and use that for mosquito repellant if you want to do that instead of using “Deet.” Also, mosquitoes do not seem to like zinc -based sunburn prevention cream, at all, so you can get double duty out of using that type, even if it makes your face sticky. For instance, the types labeled “Zinc-based Sunblock For Babies” have a high SPF and a small tube lasts a long time, even if it’s expensive. Some brands have some herbals in them, which also helps. Bugs hitting Baby Sunblock literally bounce off my face and ears in disgust, so I always wear it when going outdoors. It only takes forgetting to put it on once before kayaking to prove it worked… My personal experience living in a high mosquito area in a normal springtime (when we don’t have a drought) is that the herbals do work pretty well at repelling normal mosquitoes, but I have not tried them in Florida. At least I haven’t died from West Nile… yet.

well that proves something
You don’t read.

Hahahahaha!
tjalmy, I can just imagine you dressed like that. I’m not sure I’ve ever seen you wearing shoes, let alone socks, etc.

gator bites off arm
gators are an issue- they don’t play nice. Just the other day, near or in Orlando, a gator got ahold off a victim and had an arm for lunch. Fortunately, other kayaker(s) came to the rescue and saved the victim’s life. The big 300lb. gator was subsequently dispatched by local authorities. Should we riot now? Just be careful and if it says “NO SWIMMING”, it means no swimming. Do not play with alligators…

Dinky dock park in Orlando is right on the campus of Rollins college and has a beautiful access to a three lake system! Lake Ivanhoe also has the same type of linkup with three lakes but is not as picturesque! These are both in the winter park area of Orlando! 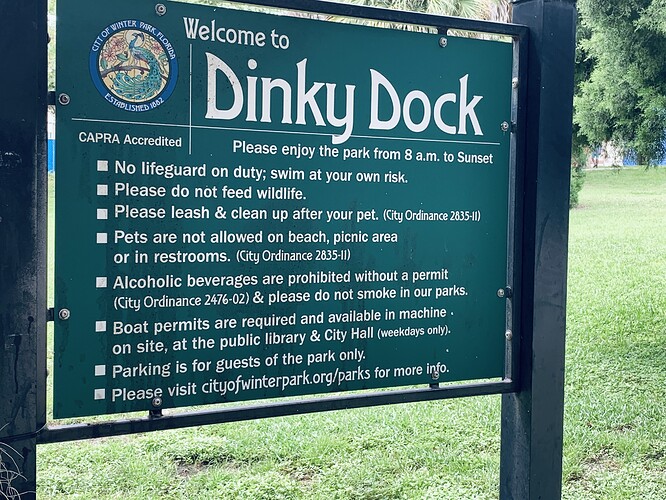 The victim was not kayaking, just swimming—according to an eyewitness at the scene

You guys are funny. Y’all must be city people.

Yes there are bugs. Middle of the day it is too hot. They are temp sensitive. Get some spray. I rarely use any. Paddle about 3mph. Don’t stop under mangrove, trees, etc in swampy areas.

Yes we have gators. Don’t look like food (ie. swim) Don’t feed em you or food. Seriously it’s illegal and trains em to come to people for food. Paddle on and they usually submerge to hide. Stay away from big groups or small groups of big gators. (8-12ft)

I wouldn’t use an inflatable for serious paddling. But that’s just me.

PS…use sun screen. Sun burn is a serious thing at this latitude.