Is this a kevlar Sundowner? 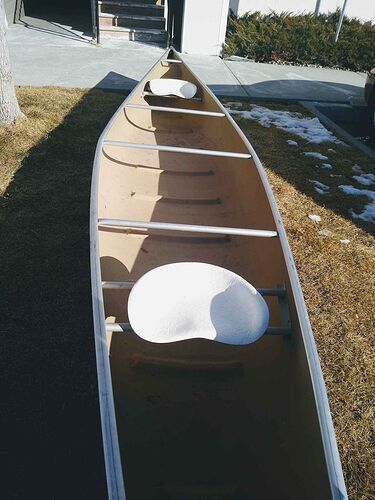 No that is not Kevlar. It is an older cross-rib layup in fiberglass or tuffweave depending on it year. It could be either an 18 Sundowner or 18 Jensen. the one pohoto is not enough. a photo of the HIN plate affixed to the gunwale on the right side near the stern will tell which model on the first line and the serial number on the second line. The HIN number will start with MFP which is printed on the tag followed by the serial number engraved in the aluminum. the last 3 or 4 digits are the month and year of production.

I just checked a picture & that canoe has one more thwart (the center one) than my 1978 Jensen 18 with similar cross-rib layup had.

Wenonah canoes are good but lightly built. They can feel and look like kevlar.

I had an Odyssey that got capsized in some easy rapids. I was flabbergasted by the amount of damage. I talked with the owner Mike C and he sent me some repair materials. He admitted that his boats are lightly built.

Well, that may depend on the layup. I have a 30 year old Tuff-weave Rendezvous that lives up to the “Tuff” name. Its not light but it is stiff & solid. Worst damage was when a 60+ mph gust in a storm broke the bungees and picked it off of the top position in the outside rack (~5’ up) and dropped it on the well head about 40’ away. That did put a small hole in the side that was easily fixed.

Mine was kevlar (and light).
In '84 I bought a Wenonah Advantage, fast canoe, but…
On the 2nd or 3rd weekend I owned it, I took it down a mild set of rapids, wrapped it around a rock, and I swam the rapids. Came back up (after gathering items), 'un’wrapped it.
All the ribs were broken, yet the canoe took its form back perfectly, with a small pinhole of a leak (patched with gray tape, paddled remaining 80 miles of trip).
Wenonah did a good repair job on it.

It is a Wenonah. I could only load the one photo. For sale on facebook marketplace in Rapid City for $800. They are saying kevlar. Thanks for the knowledge.

The pictured canoe is about the least expensive built you could buy that model in. No yoke, no front slider, plain aluminum trim. Unless i had a strong friend looking for an inexpensive, easy paddling canoe, I would not be interested in this hull.