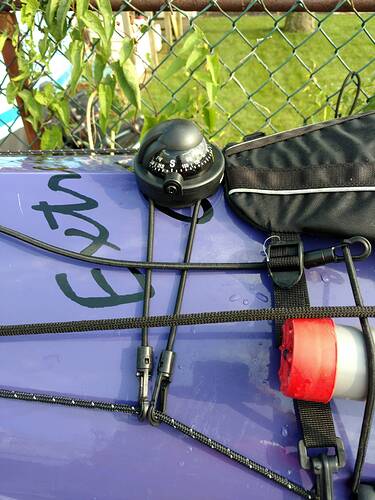 4008×5344 1.65 MB
Ok I want to stop compass clips from sliding forward on deck lines. I was thinking of some bungee tied to deck line. What’s the best knot? I can use deck line or bungee. Not much real pressure. Just don’t want it sliding forward and then the compass is not centered. May be some type of barrel in it?Thanks
Guideboatguy October 16, 2019, 12:47pm #2

If it were me, I’d just take some paracord (you don’t need elastic material for this) and rig up ‘stoppers’ on each of those longitudinal lines. All it would be is two half-hitches or a tautline, not tied within the paracord itself, but with the slipping/gripping part of the hitch tied around the longitudinal line shown in the photo. One end of a short piece of paracord would attach forward of those clips, and the other would do the same on the rearward side. In just a little bit I’ll try to post a photo of what I’m describing. I promise this method will work perfectly.

Okay, here are two pictures of what’s described above. The blue line represents your perimeter line that has the two plastic clips hooked onto it, and the yellow line is your slippage-control device. In both shots here, the gripping section on the right is based on two-half-hitches, and the one on the left is based on a taught-line hitch, but in one shot, the whole thing is flipped upside-down so you can view both knots from opposite sides. If you go online and look at how to tie two half-hitches and a taut-line hitch, you’ll see the relationship between these “grippers” and those actual knots. The taut-line will grip a little better, but you can also “stack” either of these knots in series to get a stronger grip. Note that if you use a taut-line hitch, the section having the two side-by-side wraps should be in the direction of “pull”, and the single wrap is on the “other end” of the knot, just as shown in the picture. For the one based on two half-hitches, the first loop around the main line is on the side toward the direction of pull, and the second wrap (finishing wrap) is on the “other end”. Getting it backward will result in something that works much less neatly.

Obviously, your two plastic clips go within the loop that is formed. You can set it up with a smaller loop, or simply pull the “grippers” away from each other to get the same effect, at least using the arrangement you illustrated. 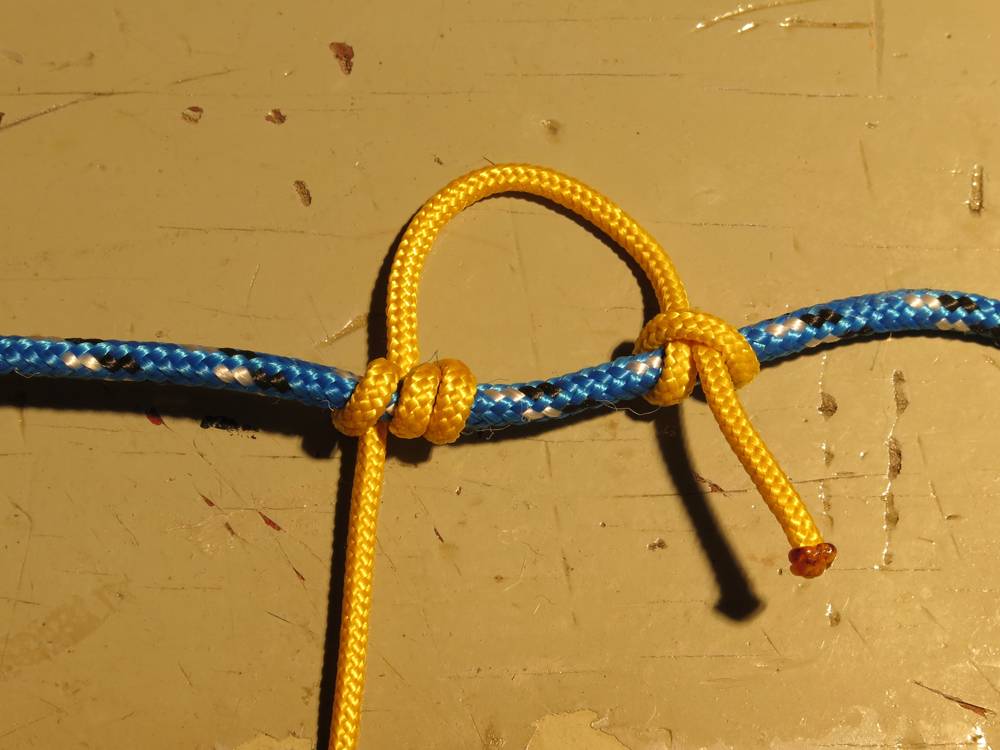 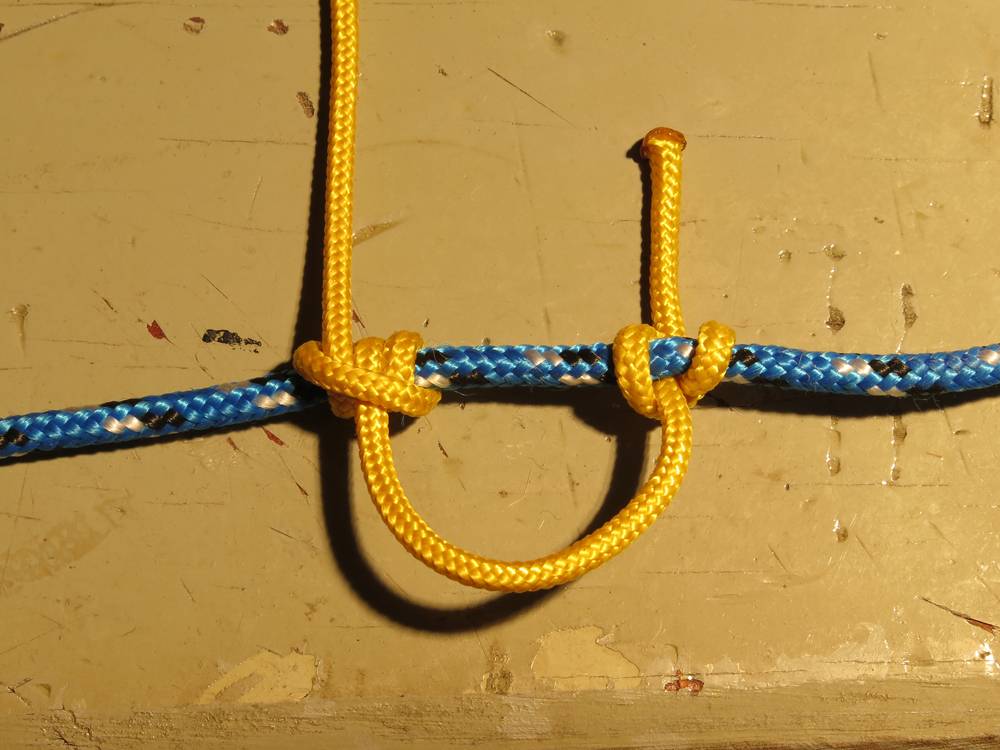 Okay, now it occurs to me that “stacking” a series of half-hitches would be easiest of all (easier to remember which end to build the knot from, since you always progress away from the location of your confinement loop) and requires less dexterity than it takes to tie the version that’s based on a taut-line. Here’s a shot of that, with five wraps on each side. 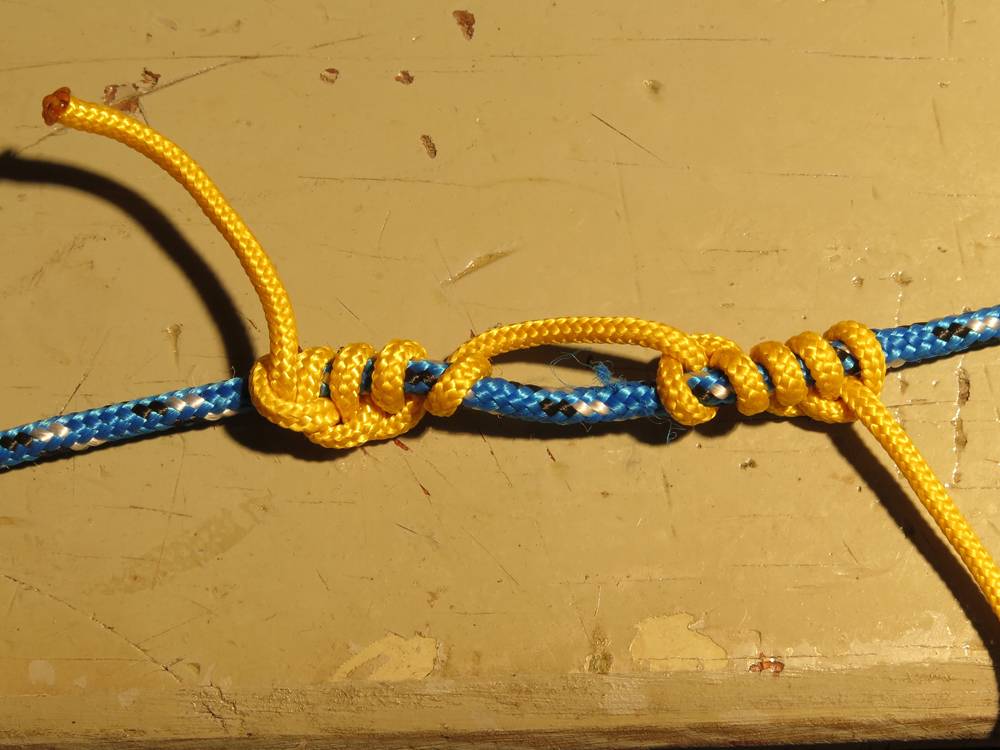 You can get more elaborate and connect a pair of prusiks, but that’s probably overkill.

Thanks a million for all your time

Now I need to go work on my knots.

I just add a twist–several twists, actually–after clipping the compass on. Pull the compass up and twirl the thing around a few times so that there is tension on the compass bungies. It’s quick and requires no additional hardware.

@Guideboatguy said:
You can get more elaborate and connect a pair of prusiks, but that’s probably overkill.

Funny, I thought a few prusik loops would be simple and easy. There are lots of solutions that would work though and yours were well explained and illustrated.

For years around boats and my knot skills suck. Know a few but if I don’t use them I forget them. When I was a kid 50 years ago I worked in boat yard at 15 and would sit and splice ropes for people. No chance now of doing it.

I decided a decade or so ago to learn a small set of useful knots. You don’t need many, just one for each application.

There are some others I use infrequently but the above set gets me through most rope tasks.

Funny, I thought a few prusik loops would be simple and easy. There are lots of solutions that would work though and yours were well explained and illustrated.

And actually, it turns out you are right. At the time I wrote that stuff above, well, silly me, but I didn’t even think of the option of sticking those compass lines through an opposing pair of prusiks before clipping them as shown in the OP’s photo. My first thought was to join the two prusiks to make one continuous loop, and that indeed would be a lot harder. The method you were probably thinking of - the one I initially drew a blank on - would indeed be just as easy as anything I mentioned above.

If you take a little slice of a pool noodle, and cut an angle down to the center on one side of the slice of pool noodle to match the angle of the peaked deck, and put it under your compass, it will keep it level and in place in the center also. Quick, easy, cheap - and if you lose it between trips, you can cut another out of a pool noodle in a minute with your pocket knife.

May make a pad with mini cell and home saw then cut angle. Stays fairly well when taunt. Thanks!