I have never worn either vest. I like the shape of the Maximus better. It caries the flotation lower so you will float higher in the water. My old vest looked like the Guide Rescue Vest, it worked fine but I have a Stohlquist Descent now and it is more like the Maximus. I thought of purchasing the Maximus but it was not in stock and the front pouch gave me pause. I like the idea of more room to carry stuff but that is more weight and caring up from there makes it harder to self rescue back onto a raft after a flip. I like this guys videos if you want to explore a little more before you buy. Whitewater PFDs | Ep. 12 - YouTube

Thank you @dtvburns and @PaddleDogs52 for the info and suggestion. I’ll check out the video. I haven’t tried many different life vests, so really appreciate your advice.

Best best I ever had for sea kayaking and I have about 6. Comfortable and stays down.

For sea kayak touring, I’d stick to a standard Type III PFD. I use a Kokatat MsFit for my guiding and teaching work.

I haven’t worn the Rescue Vest but it looks like it is related to the MsFit minus a critical pocket plus a belt.
I have no idea how it is cut but the MsFit is my vest of choice. I owned a Maximus Centurion and tried to make it work but couldn’t . I’ll tell you what worked and didn’t work for me and do whatever you want with that info.

The KMC fit really well and moved effortlessly with torso rotation. I liked that.
The additional flotation in the shoulders was great for shoulder carrying a boat. I liked that.
The vest was advertised to have lots of storage pockets plus you could buy accessory pockets for more wearable storage. I liked that. I bought them all.

It turned out that the vest pockets plus accessory pockets had lots of zippers but didn’t hold anything important. Great for storing a bazillion packets of Goo or packets for cleaning your glasses, maybe 25 or 30 lip balms but really was pretty much worthless for touring IMHO.

The other thing that killed it for me was that the vest was long and didn’t allow room between it and my spray deck for my tow belt. I use a Northwater tow belt so something else might work. Maybe the integrated Kokatat unit? I don’t know. Yeah, I removed the tow belt attachment that came with the vest. For those scoring at home I was paddling a Tempest 170Pro and an Illusion so neither deck was over height.

I tried to make it work for a year or so and finally accepted that my touring ethic and the vest’s features and benefits were not compatible.

I took a really hard look at the Poseidon and realized that with all the add-ons I would need I would look like a Michelin Man and crawling back onto my back deck in conditions would be too much work.

My MsFit is pretty long in the tooth, faded and starting to fray so I needed something. Enter the Neptune. It was advertised as having a ton of storage so I ordered one. Nice vest but the pockets are a joke in the real world of outer coastal touring. Really good looking with lots of (low volume) pockets. Your VHF better be tiny. I wnet back to my beat up MsFit even though I looked like a rag man wearing it.

So I bought a new MsFit. Shorter length, room for my tow belt, really intelligent high capacity pockets really well-suited for coastal exploration where smart accessible storage matters. I’ve got two now. One is new and one is beat-to-shxt. I wore the old one today because I prefer the color.

Thank you for sharing your experience - really paints a better picture of the Kokatat Maximus Centurion. It’s interesting - I know a Level 5 sea kayak instructor who swears by it - I’ll have to ask why they prefer it. That’s primarily what I was looking into it.

Does the MsFit differ from the Outfit only in which side the middle pocket is located?

Most instructors I know use the Kokatat Guide Rescue Vest. What’s the primary difference between it and the MsFit/Outfit in actual use on and in the water, other than the pockets? Looks like an extra quick-release webbing belt on the Guide.

The MsFit has the zipper center-chest while the Outfit has it offset. That means that the Outfit’s radio pocket puts the antennae up your nose.
The MsFit is a women’s vest so with the tailoring to accommodate a woman’s upper body the zipper had to be centered. Offsetting the zipper on the Outfit seems like a miss to me.
Aside from the “Princess Seams” the MsFit is shorter for a woman’s shorter torso. To me that is a bonus. What you might do is take a tape measure to a shop and measure the length of the MsFit and the Rescue.
If you aren’t using a tow belt the length probably doesn’t matter. I’m a 5’10" tall 190 pound paddler and I fit in the 42-46" MsFit. I think it is the large. Most of the men I see paddling around here, if wearing a Kokatat, are using the MsFit.

Keep in mind that comfort of a PFD really depends on your body type. We used MsFits for about 10 years. Obviously, they were good enough, but when really working on my forward stroke I got a little bit of irritation just forward and below my shoulder when paddling hard. I have the short & stocky body type.

Anyway, we eventually replaced the MsFits with Astral BlueJackets. The Astral is more comfortable when really working the torso rotation, but the pockets are not has good, and it’s a little harder to get the chest up on the back deck when doing reentries.

I had an Astral and the pockets were useless I sent it back. Love my Kokatat Hustler R. Much better comfort wise also. Shoulder straps more comfortable also. It stayed in place and was lower.

This is what I heard back from Kokatat:

1) What are the main differences between the Guide and Maximus Centurion?
The Guide would be the best fit on a female user.

The main differences on the Guide vs Max Centurion are the foam panels and the entry. Guide has an easy to operate front zipper with clips on the top and the bottom for extra security. The Centurion is a pull over type that unbuckles and then the straps can be released or loosened. The Centurion has quick release D rings and the removable belly pocket. Here are the links to the website with more details.

The Maximus Centurion type V rescue vest is the latest addition to the popular and award winning Maximus PFD platform. The vest comes standard with the accessory Belly Pocket.  IMPORTANT: Make sure you select the correct PFD Certification 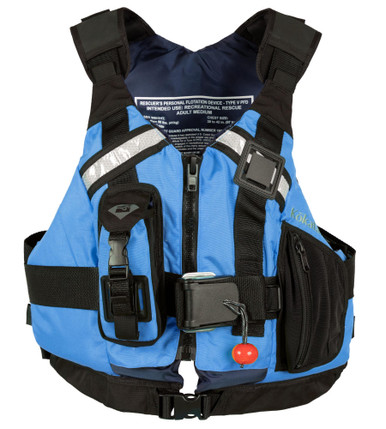 2) How much higher in the water might the Maximus Centurion hold you than the Guide Vest? The Maximus Centurion has the highest rated buoyancy of any Rescue PFD produced by Kokatat, and likely by other manufacturers. The buoyancy measurement goes up slightly as the size increases for the Max Centurion. The foam panels on the Centurion are longer than the Guide so the “float” will be higher. Comparing the height of the float is not a exact metric that Kokatat can provide.

3) How does the overall pocket volume of the Maximus Centurion compare with the Guide?
Using the additional removable belly pocket will provide you with a larger volume of storage than the Guide. However, the Guide has a handy dedicated radio pocket.

I’m sure that they have tests that confirm their statement about the the superior pocket volume on the Centurion. There are pockets everywhere but I found their shapes to not accommodate the stuff that most sea kayakers carry. Personally the VHF pocket is a big deal for me. Buy another pocket that straps it onto shoulder strap so that it is in the way when I want to look over that shoulder isn’t ideal.

If you are able to try them both on with all of your expedition stuff it would be good. Your gear might fit fine. Also sitting in your boat with sprayskirt and whatever tow rig you use can tell you a lot.