Just scored one at a good price from the NRS sale. Womens sizing a bit different from my older one but it is also time to admit that holding the line to continue to fit into the older Unisex small is getting more difficult.

I have a couple of small questions to folks who have already gotten one of these. One is ease of reattaching the bottom to the top. It appears to me that once you get used to the lineup to zip back together, reattaching the bottom to the top after a break can go fairly well. Is that others’ experience? Going to do it anyway, just wondering if there might be circumstances where I want to get into the dropped pzip suit instead. And what is the best way to stow the extra flap for over the lower face when traveling hood stowed? I have just folded it into itself but am not convinced that would stay put in wind.

Also, just curious about how often you tend to use these as separates? Part of this decision was having to admit a couple of oft-used separates just had their last season and this sale put the suit at nearly the cost of buying new GoreTex separates. (Manufacturer’s proprietary equivalents just do not last well in my life compared.)

Thanks for any comments on living with this suit. It seems well made. I have had Expedition levels for a while but this has more reflective striping and a nice feel to the material.

Subsequent update re original owner and warranty - I called Kokatat to find out how to record that I was the original owner of this suit. Especially since it is a different gender and size than my older one, which they know about since it is a warranty replacement and rather unique combination. They don’t have an online registry set up and are going on best information available. So hang onto packing slips if it comes as a present.

. It appears to me that once you get used to the lineup to zip back together, reattaching the bottom to the top after a break can go fairly well. Is that others’ experience?
Had mine one paddling season now, Zipping in has becomes second nature, I practiced around the house. I might not be able to get the zipper started in the dark. I need to be able to see that zipper slot / pin “feature”. I don’t have to completely detach the halves for most breaks of course.

And what is the best way to stow the extra flap for over the lower face when traveling hood stowed?
I have buttoned the flap back on itself, or removed hood completely for a couple outings. I like the hood.

Also, just curious about how often you tend to use these as separates? I have not used the suit as separates. Have a Peak two piece and use the jacket as a separate. Got to get some mileage out of that too. :^)

J
I deleted my photo … it did not really illustrate like Marshalls. 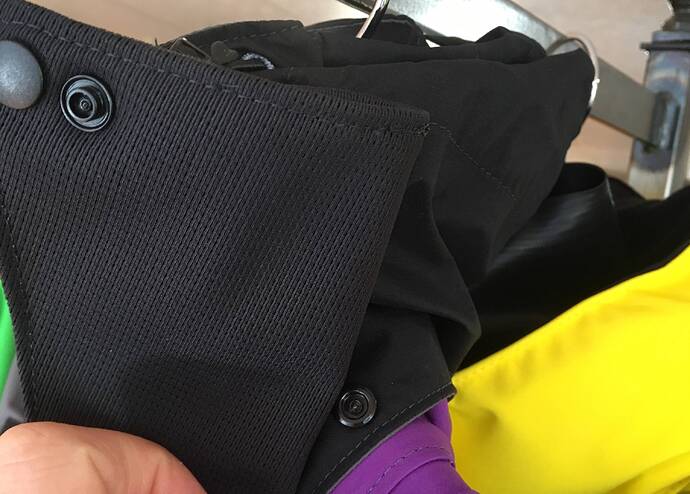 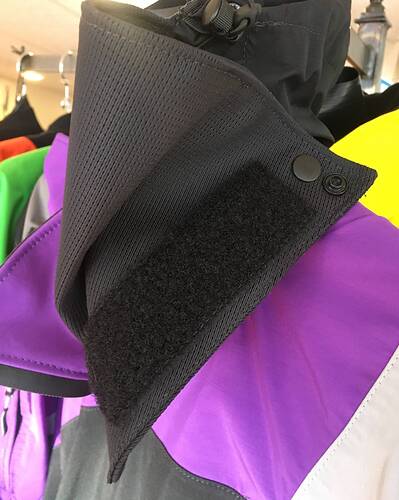 3013×3775 951 KB
Sorry, apparently the violet women’s small I have on clearance was not the right color, and you certainly wouldn’t have fit the large mens yellow.

As to the lower face flap, there is a snap on the upper corner that attaches to another at the lower hood neck line on the left side. Photos show the snap with face mask unfurled and stowed.

Congrats, Celia! Great choice!. I saw that NRS sale - the prices were fabulous.

Got my Radius spring of 2016. I practiced zipping the two pieces together (sitting on the floor in my den) using liberal applications of Zip-Tech around the connections just to learn how to line things up. Wearing the suit, initially it took a few tries to get the zipper aligned but now I can easily zip it on the first attempt - but I do need to be looking at it, although I can now manage without my reading glasses. Still Zip-Tech it regularly.

I think the extra flap you mention is what I call the ninja-mask. Keep mine folded with the hood and stored inside the collar when not in use. If I"m wearing the hood but don’t need the mask, I shove it inside the hood or leave it out. The snaps connecting it to the hood are pretty tight.

Separates: bottoms are good as waders but I’ve never used them with a different top while paddling as I think they’d fill with water in a capsize. I’ve never tried it, though, and now you’ve got me curious.

Have used the top as a drytop many times in the summer when paddling Lake Michigan and even a couple of times in class on an inland lake when I knew there’d be a lot of wet work. As a stand alone it does a great job, especially in windy conditions.

I love the suit for its efficient design and function. I’m sold on the two-piece. Even if someone gave me a GoreTex one piece suit, I wouldn’t switch.

Just be sure you attach the velcro points and screw down the knob tightly. Once I didn’t and had a trickle of water enter around my belly button during a swim. It had nothing to do with the suit design. Purely operator error.

@Marshall I know the numbers seem like I should fit, but I didn’t fit a womens small before the last 8 to ten pounds. Tried one at a skinnier size and I was pushing my luck in the shoulders then, definitely in the waist now even if I stay in shape. I am a smidge past the weight and at the top of the height except maybe half an inch due to shrinkage in the womens small. I land much more in the middle of the Unisex small except for the lower half. There I can make the hips but I have to hit paddling season with solid gym time behind me, and if Kokatat’s charts are right it is a good thing I mostly paddle in weather that does not require two layers these days.

When I was measured for my last road bike the folks at Waterford thought it a best fit to put a 48 whatever bottom half of the frame on a 50 whatever top, to capture the fact that my arms are not as proportionately as short as most women’s. At the end of the day what I ideally need in Kokatat sizing is a unisex small top and probably moving into a maybe now a slightly shortened womens medium bottom. Violet is a fine color, honestly as long as it isn’t yellow any color is fine. After I got chased out over the water by a bee and had to roll to lose him, no more yellow.

I tried hooking the flap, will take a look at your photos and try again. Thanks for the info.

I just looked at the ones you have left, fantastic prices.

@Rookie You will definitely have a wet experience swimming if you try using just the bottoms without the matching top. Or any separates except for a properly joined Kokatat bib setup, among the systems I know. I was not talking about expecting dryness in a swim if using the bottoms separately, more wondering how much people had taken advantage of the option to check out comfort level. Since with just the bottoms you still get the knob…

@Celia Knob’s not been bothersome when wearing the pants as waders. While the knob droops, it doesn’t interfere with anything I"m doing. For me, it’s a very comfortable dry suit to wear while paddling. So much better than another suit I had tried: the Expedition with its wretched rear zipper.

@Rookie I gave the rear drop seat zipper a try in an early dry suit. Picked up a worn-maybe-three-times older Coast Guard suit on EBay with it. Probably 2003 version, the neck gasket was still sewn in. I used it mostly in the depths of winter because it was wonderfully featured for that - big extra flap around the lower face and some other stuff for subfreezing conditions their other suits didn’t have yet. I found it felt a little bulky for all day paddling so it stayed as a mostly winter suit.

I didn’t match the womens sizing in Kokatat at that point well - the small was too much so in a couple of places and I was swimming everywhere other than that in the medium. We had a local guy who let me try on his wife’s suit before I bought. So my suit that I paid regular money for was Unisex from the start.

But I had a unique issue with that drop seat that caught me by surprise on the first paddle with it. I have an illeostomy and expected I could make the drop seat work somehow. But I got out there and found I couldn’t get to my necessaries with the ostomy, at all, without taking down the upper half.

I paddle in Maine sometimes with a woman who used to do a lot of rock climbing, where the norm for women was to have a zipper at the crotch and use a FUD. She has a suit with the dropped seat and finds it clunky compared to her climbing suits, but she was accustomed to using a FUD before coming to paddling. I know other women who tried the lowered zipper with FUD and simply could not get comfortable with it. The dropped seat is perfect for them.

Bottom line, it has been tough for Kokatat to come up with a single idea that will leave both genders happy. I have to give them credit for trying. On my last warranty replacement, I got the impression that I am getting more unique by being in their records as a Unisex suit with a dropped Pzip. I think the zip switch thing is a good try at a design that will make both genders happy.