I met Mark Przedwojewski in 2015 when he was portaging on the Little Traverse Wheelway during his trip around Michigan in his Sea Wind. A delightful and accomplished paddler, it was an honor to meet and talk with him. He’s having a serious medical issue right now, so please send some thoughts of healing energy his way. 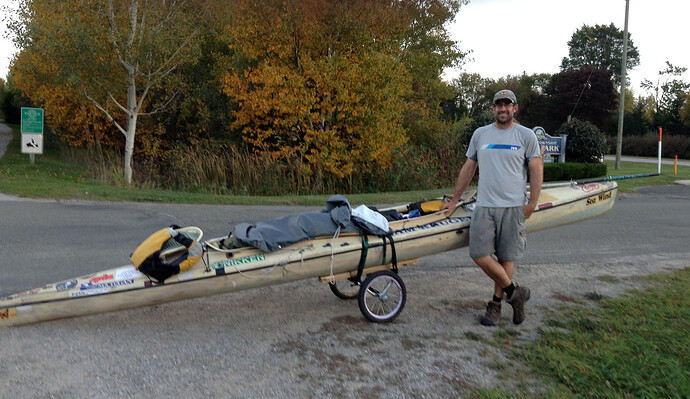 “ManitouCruiser (aka Mark Przedwojewski) is a founding member of WaterTribe. I was inspired by his mentor Verlen Kruger and they made my Dreamcatcher and then took part in WaterTribe’s first Everglades Challenge in 2001. Mark and I also did EC2005 as a team and catamaraned our Kruger Canoes together for some wild sailing. It was probably the most fun I’ve ever had in a WaterTribe Challenge.

Mark did the Minnesota Kruger/Waddell Challenge in 2018. Get this - he did it in a Sea Wind!!! Anyone who has ever canoed in the BWCA knows how tough the portages are and usually you try to shave every ounce. But Mark is a tough guy and had no problems with the portages and his Sea Wind. He probably had the most comfortable canoe there.

Recently I got some horrible news. Mark has been diagnosed with lymphoma. He needs some help so he can be treated. Here is a link to his Go Fund Me page. Please do what you can and pray for his recovery.

Thanks for putting the word out Rookie.
I, too, had the pleasure of paddling and camping with him and a couple other members of the “Kruger crew” for a couple days on the Wisconsin, seems like a long time ago now. I’d bet there are quite a few of us who have - Mark gets around as few others have. McWood, who used to post here a lot (and was on his support crew on the Mississippi river record run), did quite a bit of paddling with him, if memory serves.

This is an unfortunate time to be dealing with medical issues, but if anyone can come out on top of such problems at this time, its Mark. He is one tough old bird.

Let’s all do what we can.

BTW, unless I’m sadly mistaken, that is the very boat Verlen took from the Alaska to Argentina trip.

Thanks again for letting us know.

I didn’t know him well.
If I’m recalling correctly, with a group we paddled three days together and camped two nights. What struck me as really noteworthy about that trip was how he, and the other members of the Kruger crew, traveled so efficiently. At camp in the evening they’d cook breakfast with their supper and reload all their cooking stuff. By simplifying breaking camp we could be on the water at sunrise or even shortly before, covering miles in the stillness and mist of the early morning . When the wind came up we’d break briefly and they’d reheat breakfast.
As I sit here I have before me his business card. “Builder/Shop Manager” it reads. He’s done more than anyone else I know to keep the Kruger tradition alive, both by paddling with groups and through his building.

David Eagleman says there are three deaths:
"The first is when the body ceases to function. The second is when the body is consigned to the grave. The third is that moment, sometime in the future, when your name is spoken for the last time.”

Let’s not forget or fail to credit him, or Verlen Kruger, for a very long time in the future. Let’s hope someone of his skill and grace will pick up the baton and carry that tradition on. Let’s not neglect to speak their names.