65 degrees. Overcast in the morning, clearing in the afternoon.

Winds calm to SW at 15 knots 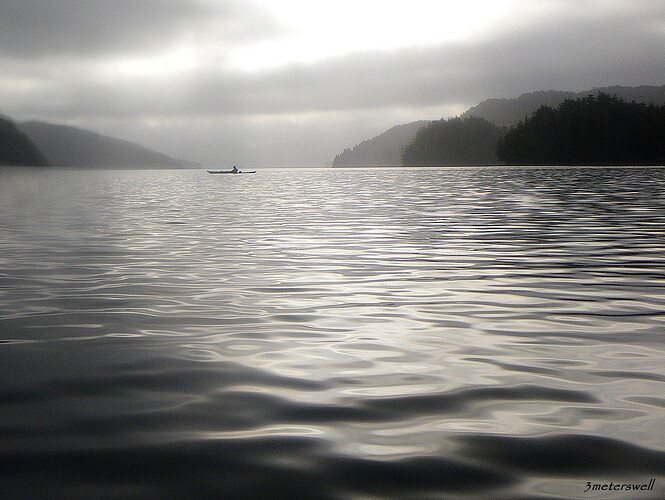 Rounding Wedgborough Point we turned south out of Kwakshua Channel down Fitz Hugh Sound. It was 9:00 AM and the flood was reaching maximum flow. While the current didn’t amount to a lot it was definitely against us and it was teamed up with a 15-knot headwind. We didn’t have much going in our favor as we eddied, dodged, scratched, cursed and crept for 2 NM along Calvert Island’s steep eastern shoreline to the spot that we had marked as our crossing point to Addenbroke Lighthouse. Fitz Hugh Sound was capping and just starting to streak. It looked a bit awkward but not difficult. We estimated that it would be a 45-minute cross wind/current ferry glide to Addenbroke so we took a few moments, clung to a kelp bed and fueled on energy bars before starting across. 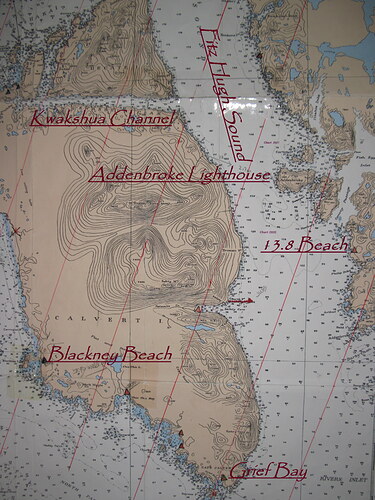 Dave called Addenbroke via VHF for a weather update and they immediately came back: “Southwesterly at 10 knots, seas rippled”.

We took that to mean that the wind we were experiencing against Calvert’s shore was a localized effect and that the estimated 45 minutes that we would spend crossing would be quick enough to accommodate any major changes. Dave told the lighthouse that we were coming their way and that we would check in when we got near. About ¼ of the way across the wind decreased to a genteel 10 knots and provided a pleasant crossing. Ten minutes out we hailed Addenbroke and they invited us ashore for a visit.

Dennis and Paul met us on the rocky shore. Senior Light Keeper Dennis Rose had been stationed at several lights along the coast and spoke of meeting Jennifer Hahn when he was the Junior Keeper at Ivory Island. That meeting is detailed by Jennifer in her book “Spirited Waters” and John Kimantas speaks of Dennis and his family in his book, “the Wild Coast 2”. When he learned that we were from Seattle he told us that he had lived there as a child and that his Dad had been a teacher at Meany Junior High School. I nearly fell over because I had been a student at Meany. When he told me his Dad’s name I was blown away as I had known Mr. Rose as a teacher and remembered him well. What a small world. 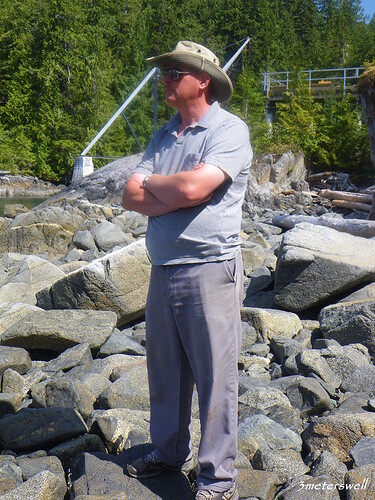 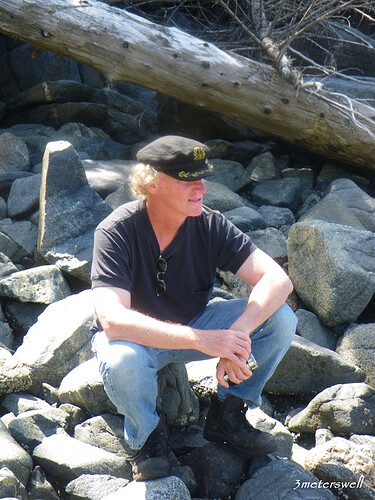 They took us on a tour of the station and invited us in to the living quarters where we met Dennis’ teenage daughter, Sylvia. She was plopped down on the sofa watching TV. Dennis made fresh coffee and served banana bread muffins. Paul, the Junior Light Keeper, regaled us with tales of growing up on the coast and took some videos of us that he posted to YouTube.

Paul talked Dennis into showing us the banjo that he had made from a Cherry Tree that had drifted out of Fish Egg Inlet onto the rocks below and that he had taught himself to play. I wasn’t sure what to expect as he started tuning but when he began to play I was dumbstruck. I was anticipating a bad rendition of “Deliverance” but Dennis played classical. Absolutely beautiful, haunting, classical music on a banjo of his making. It was unlike anything I had ever heard before. Sitting in that warm kitchen with the sun flooding in through the window, eating warm banana bread muffins and drinking fresh coffee, Dennis’ otherworldly music washed over me and I left my body for a bit. I just sort of floated away.

Too soon it was time for Dave and I to float away for real as we had another 4 NM miles to go to the place we intended to camp. A cove north of Philip Inlet mentioned in the “Wild Coast 2” and located at N51 33’ 99” W127 47’61” was our destination. That 4 NM was an invigorating slog into the wind and waves. Lots of cooling wind in our faces and water over our decks. 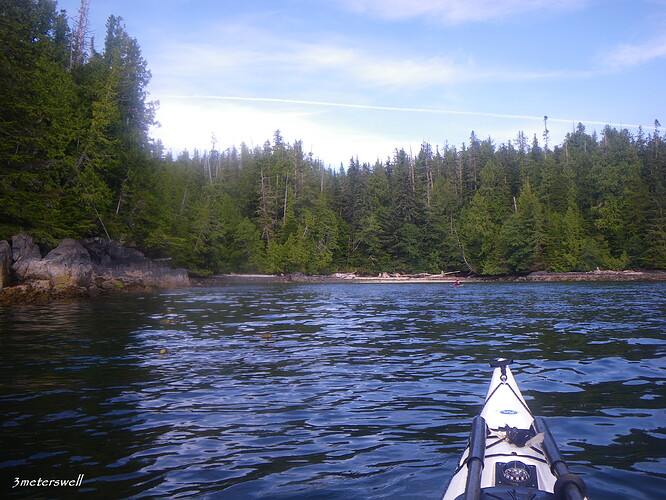 It was an interesting site with a sandy beach that led right up to the steeply sloping forest and a sharp, black rock outcropping. The tide line made it clear that the sand would not be an option for camping. The forest offered nothing but the area to the left, made up of angular fist-sized rocks, looked promising. It sloped up abruptly from the water forming a “bench” that was backed by a small salt water pond filled with very large logs. There was just barely enough room to set our tents up between the logs and the previous night’s tide line. We checked and double checked the tide charts I had made. They indicated that there would be a 14.1 high tide at 12:16 AM while the previous night’s tide had risen to 14.8 feet. We should be fine. Still, as we turned in, I set my alarm for 11:00 PM. I was feeling a little uneasy about that tide. 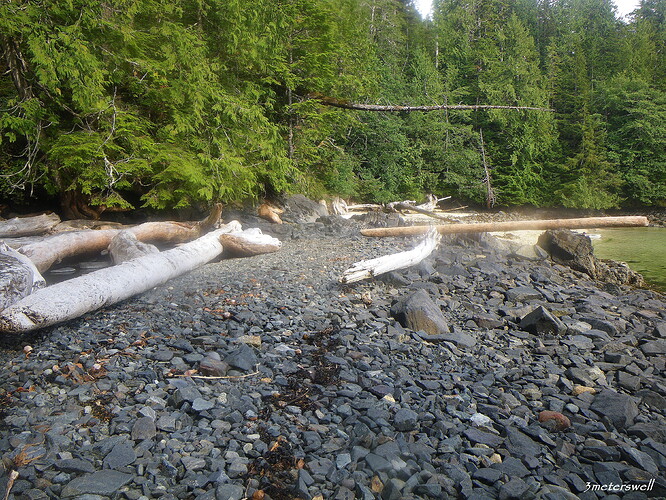 When my alarm went off I listened carefully to the sound of the water. It sounded close. Really close. I put on my headlamp and poked my head out of the tent.

The water looked much closer than I thought it should have for an hour and 16 minutes before high slack. I ran through the rule of 12ths trying to remember what the tidal range was with the knowledge that in the next hour we would see another 1/12 of it. I realized that the tide tables that we had made were in my chart case securely strapped to the deck of my Tempest which, along with Dave’s Explorer, was stuffed up into the woods and tied to a tree behind a stretch of beach that was now underwater. I would have to walk over the sharp, jagged outcropping and wade through chest deep water in the black of night to get to the logs which I would have to scale in order to get to my boat to check that one stinking number that we had checked and double checked before going to bed. The detritus at the tide line said that we would be fine but my mind was saying something else.

I got my head down next to the “beach” to try to measure the difference between the water and my tent. My headlight was in the way and bumped against the stony beach as I tried to get a better look. I took it off, pressed my cheek hard into the sharp rocks and pointed the headlamp on the small distance separating my tent from the water level. I looked at my watch.

I have to admit that math has never been my forte and doing it in my head in a sleep deprived state while the water level threatened my tent was a hindrance to accuracy and shattered my self-confidence. I figured that this problem was going to exceed my capacity for math and this beach’s capacity for supporting dry camping. With 30 minutes to go and the water a scant 2 inches from my tent I woke Dave up.

Dave sleeps with earplugs so he isn’t easy to wake up and when he does waken, he isn’t immediately coherent and is given to speaking in tongues. The normal morning routine is to scream his name several times at which point he will mumble, “OK………I’m awake”, but he really isn’t. He doesn’t fall back to sleep but he isn’t capable of doing math. When he is fully awake, though, the rule of 12ths rolls through his mind and off of his tongue like water through a hose. I didn’t feel like we had time to worry about whether he had a pleasant transition into conscientiousness or not. I wasn’t worried about how the volume or the tone of my voice might affect his psyche. Regretfully, I couldn’t concern myself with what impact my voice might have on the wildlife of the Great Bear Rainforest. I just needed to make sure that he was fully awake so that my numbers could be checked and appropriate actions executed.

I suspect that the Addenbroke crew, 3.5 NM distant as the Eagle flies, were jolted from their beds by the sheer volume of my shouting and probably wondered if an earthquake had disturbed their slumber. It did the job, though, and Dave awoke quickly and any prejudice that he may have felt vanished when he heard me say, “Dave, we have a problem. I think we’re screwed” . He was out of his tent, alert and poised for action.

He looked at the water and asked what time it was and what time high slack was. He checked his own watch and looked closely at the water. He squatted down to focus his headlamp on a single fist-sized rock that was 3/4 submerged he said, “If the water takes that rock we’re screwed”. So we squatted at the water’s edge and silently watched as teeny, tiny little-bitty waves lapped at the rock and then………….it was gone. We were screwed.

Without a word we both stood up, pulled our gear from the tents and lifted them up onto the logs floating in the pond. I laid my air mattress and sleeping bag on a fat, flattish log while Dave took the footprint off of his tent and spread it out on the very highest point of the rocky bench. We watched the water take the bench where we had originally set our tents, looked at our watches and went back to sleep. Good thing it didn’t rain. 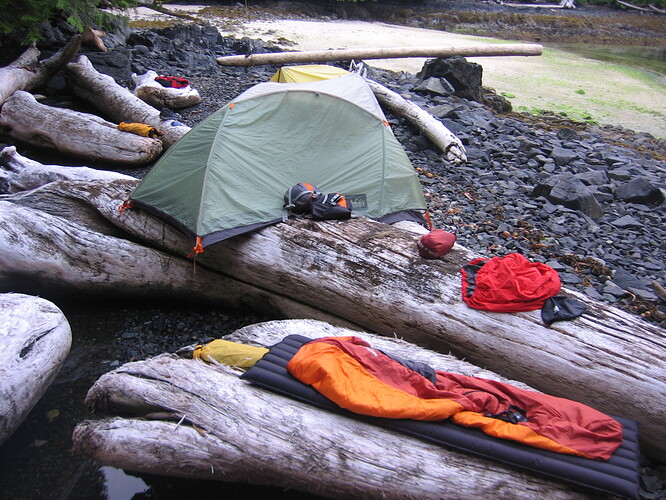 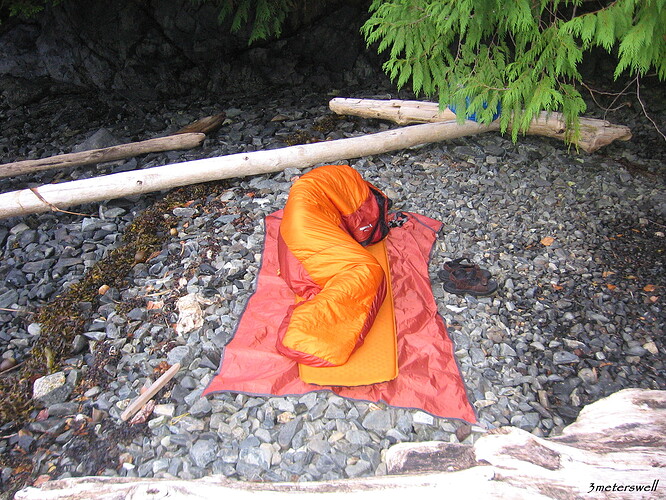 After returning to Seattle and agonizing over how this could have happened, I found that there was a typo for the previous night’s high tide. Our table said 14.8 feet when it was actually 13.8 feet. The tide that chased me onto the logs was 14.1 feet.

Write this down: Never plan on camping at 13.8 Beach if the tide exceeds the name.