Easter weekend in nature’s cathedral was good for my soul. The smells of spring were in the air, flowers, and new bright green leaves just coming out are a delight. Karl and Lisa paddled 3 days and spent 2 nights on the Lake. Carrol and I spent one night and paddled two days approximately 10 miles each in Carol’s tandem. I have come to think of it as Cleopatra’s barge of the Nile.

We camped on an island in an arm of the lake. While paddling we saw lots of Osprey nests and at least twice as many Osprey. Heard a loon and there was a pair of geese nesting in the bulrushes on the tip of the island. Lots of Tiger Swallowtail butterflies on the wing over the water. Water was 59F with day time highs in the 60s. It was below freezing both nights. We sat around a fire made with dead Southern Red Cedar to stay warm after dark. Lisa slept in a hammock and the rest of us on the ground in small tents. I forgot to take any photos of the campsite. I am hoping Karl sends me some.

Three of us wore dry suits while paddling and the other had on dry bibs with my Gore-Tex coat. Carol will be getting a dry suit in the future. I like that when we get to the ramp or where we camp I can take it off and be wearing the clothes I have on. It hands down beats changing out of a wet suit.

The Lake is shallow with trees and stumps above and below the water in many areas. The channels are well marked and I saw signs warning of the areas with stumps. The smaller coves I would stay out of if sailing.

It’s surprising to see (mostly) no docks or structures within 300 feet of the lake. The US Corp of Engineers maintains a 100-yard natural zone around the lake. Given the many coves and islands of the lake, and the sparsely populated rural surrounding area, it has a wild landscape that many manmade lakes lack. We saw mostly fisherman and a surprisingly low density of boats on the water. Reminds me of Lake Jocassee, but piedmont instead of mountain terrain with less boat traffic on the lake. Photos to follow. First and last were taken by Lisa S. 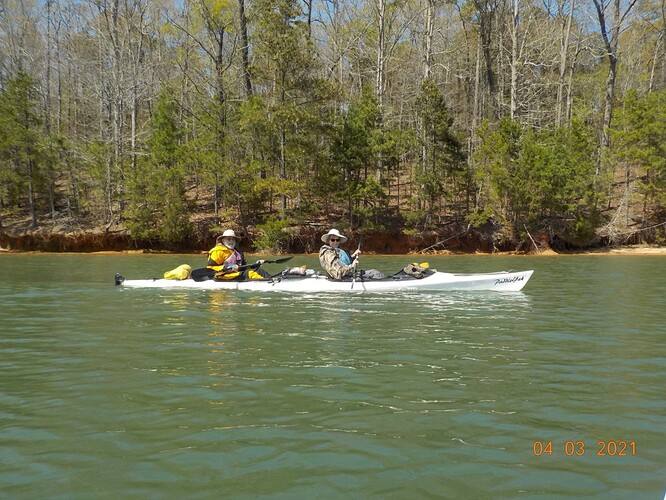 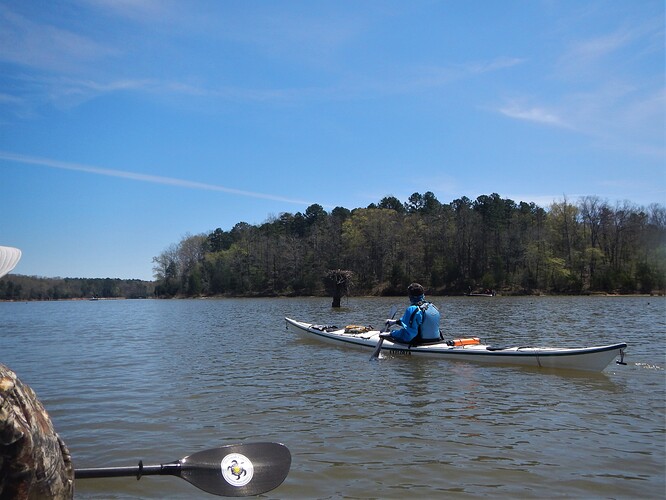 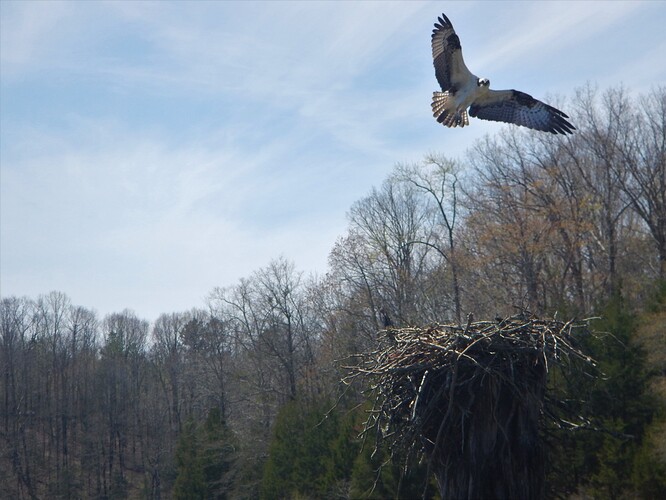 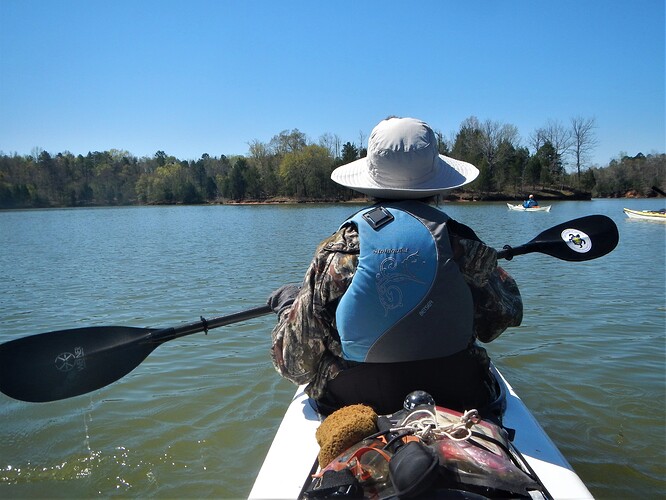 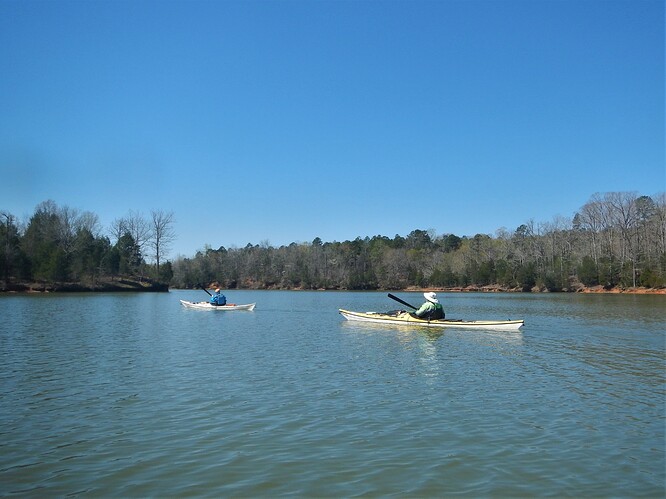 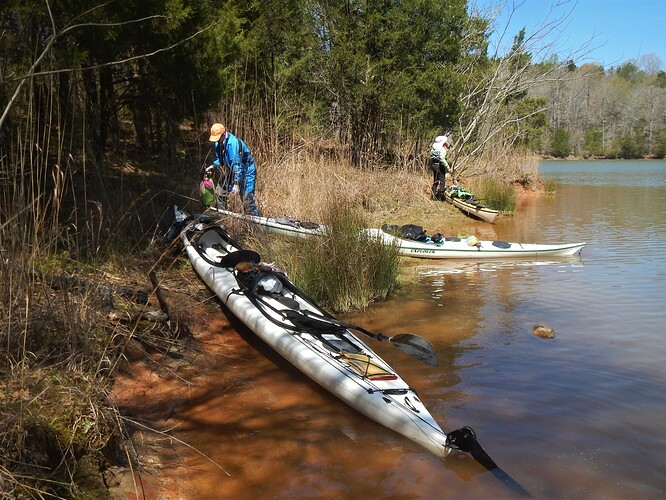 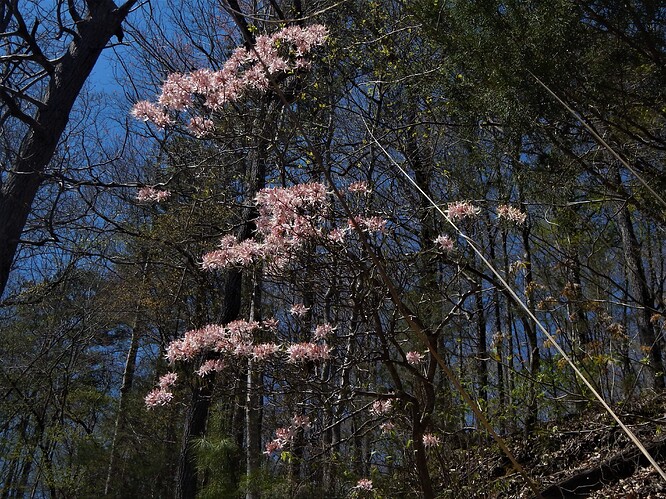 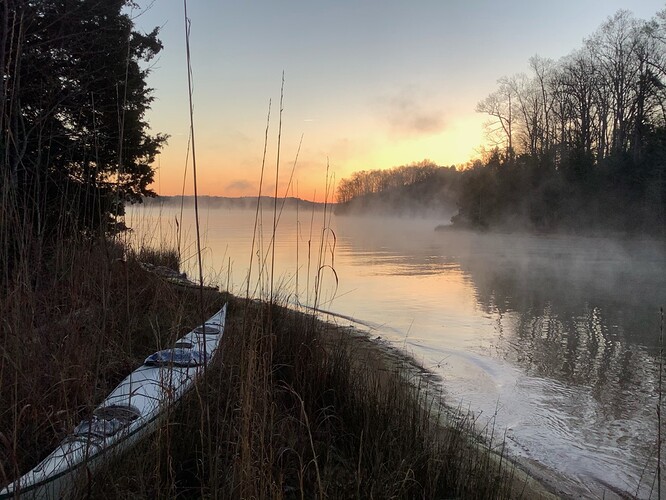 Wish more lakes, rivers, bayous, creeks, bays, beaches had 100 ft or more restrictions on development. It would help run off & clean up the waters, help nature, and infuriate politicians who focus on property tax based development.

Somehow I missed the trip announcement