I am just about ready to order a new 700. I have considered the Epic and the Seda but the QCC just seems to make the most sense for me. Much of this is based on price and customer service reports.

I have decided on the Carbon/Kevlar over the fiberglass despite some opinions on this forum that steered me towards fiberglass. This is mainly due to my thoughts of racing in the future and most agree that there may be some slight speed difference in the lighter build. Hopefully I am correct.

The last question is regarding skeg and rudder options. As a rule, I don’t like rudders. A drop skeg is what I have used for years and I don’t use it much. The rudders are just more trouble than they are worth for me in my protected water paddling locations.

So, what do you guys think about QCCs skeg system? How much room does it take up in the rear compartment, do you think it is needed on the 700 and do you know anything about possible leak issues.

I have a complete Smart Track system I can put on it at a later date if need. Do you know if it is an easy addition or is the system on new boats molded into the boat in areas.

I know that was a lot but any help would be appreciated.

Greyak can help you here!
I have boats with skegs,with rudders, some with neither and now a kayak with an integral rudder (Mirage 580). I think you right on target with a serious look at intended use. For paddle camping the skeg box takes up valuable storage space whereas a rudder does not. If paddling protected waters then a rudder is fine, they just dont do well when the mechanism/cables are trashed on rocks and ground into the beach (Mirage rudder is more protected as are the cables). Skegs get jammed with pebbles. Each has its own set up pro’s and con’s I’m sure you’ve weighed.

If you get a QCC700 there is a mod you can do, Greyak will probably provide you with pics, it replaces teh OEM skeg release with a modified Smart Track release that will give you positive and infinit ability to adjust the skeg…its an easy mod and one I’ve done to my QCC-well worth the time and trouble involved! You’ll like the QCC, it can do many things and though it is race worth it is one of the first boats I turn to when doing a long paddle camping trip due to its huge hatches/large cargo volume. In my opinion-and note that many dissagree-it is almost skeg or rudder dependent for straight tracking,not nearly as much as my Looksha II (another race boat of antiquity), but much more so than the Mirage.

As a footnote to Greyak, I’ve got the heart rate monitor up and running and the GPS ready, so some figures forthcoming on the QCC versus the Mirage versus an AH Pro versus a Q-boat versus the Looksha II…the Jubilee is stil with the oldest daughter until school is out so cant put that one in the mix yet.

some thoughts…
1- dont worry about the skeg box taking up too much space in the 700 - the aft compartment is enormous. If you fill the 700 to capacity - you’re carrying way to much crap.

2- If I had to do it over again, I think I would have got the rudder - the skegbox has a well documented history of leaking - nothing terrible - a periodic dab of silicone eliminates most of it - but one more thing to mess with. ONNO/Tideline makes an aftermarket rudder setup with gas peddle controls.

3- absolutely replace the skeg control with a ‘trim-tab’ (Greyak deserves kudo’s for this innovation). The jam cleat that it ships with, just doesn’t cut it.

Fiery Debate
This skeg vs. rudder… As a former QCC with rudder owner I can only speak to that end. However, my boat prior to the Q-Tip was an NDK Explorer. I found I rarely used the skeg, but the Explorer is reknowned as an exceptional rough water handler. I do think that having only a skeg forces you to learn the finer points of edging and various strokes to assist, most of which you’ll need less of if you go to a wing paddle and racing’s your bent. Having a rudder allows you to pivot around buoy turns without losing precious time and momentum putting the boat on edge. It’s nice too for surfing a following sea.

The Q-Ship has a deceiving amount of rocker; it’s not a particularly strong tracker which makes for some fun if you like a boat that’s a little loose and maneuverable. Rudder down means it tracks like a train, with little stroke induced yaw, hence, forward speed. That said, search for the Smart Track rudder threads-most will agree that the bulbous housing drags in the water.

My pet peeve was that the low thigh braces and Toe Pilots force your legs down and out-not the most conducive to fast paddling-legs together allows you to use your legs-limited somewhat by the narrow forward keyhole cockpit, even if you do fabricate a brace to span them or use something like Pat’s gas pedal system. Several skeg users have padded the front bulkhead out to allow for a wide platform to brace/push against.

If I were buying another Q, I’d still go for the carbon/kevlar, or maybe even an all carbon. It’s a bit lighter which, aside from loading/unloading and portaging, gives you a little bit more when accelerating to catch a wash, pop up over someone’s wash to come around, or pick up a wave. I’m currently paddling a fg ski, and miss the feathery weight and acceleration of my former carbon one (but not the tippiness). The fg just feels sluggish. It’s fine once you get it up to speed and very stable in higher winds, but it doesn’t have that lively feeling the carbon did.

In any event, good luck with your purchase. Despite the fact I no longer own a Q, I still hold that they’re fantastic boats. Sheer quality besides.

Thanks
I will probably order the Carbon/Kevlar tomorrow with the rudder and thigh braces. Hopefully I will be happy with it. It was a tough choice. The more I thought about it the more I got confused. The Glass Seda Glider is advertised almost as light as the QCC Carbon/Kevlar and is $600 cheaper in the glass version from a guy on ebay. I have heard that the weights aren’t always accurate with the Sedas. I almost went that route. The final deciding factor was the QCC customer service reputation. That means a lot when you are spending this much money.

Hopefully I guessed right. That Seda is still mighty tempting though.

I bought an 08 QVC 600 x and I’m having the same problems with the skeg. I have the carbon fiber and while I can make it go in a straight line most of the time and I’m a very very very new sea kayaker, the least little headwind will defeat me. The skeg is weird and a headwind actually makes it harder to paddle in the direction I need to go, even if it’s only 45° off the headwind. I had the skeg down thinking it would help and it did the absolute opposite. I had to bring the skeg up to get where I was going. If I’m heading away from the winds or if they are behind me coming from any direction, then the skeg helps. I’m going to do away with it and put in a rudder. P S I agree that the skeg cleat is useless. I’ll be struggling paddling and I find after a while that somehow the skeg is down when I never released it.

If I’m heading away from the winds or if they are behind me coming from any direction, then the skeg helps.

That’s really the only thing a skeg is intended to help with. It sounds like it’s working just right. You want to retract your skeg (or rudder) when heading upwind. With a wind off the beam or off the stern, the skeg will help correct the tendency of the kayak to turn into the wind. You can fine tune the amount of correction by adjusting how deeply the skeg is deployed. I wouldn’t abandon the skeg just yet. Maybe post a new thread describing your skeg issues and see if other kyakers can offer more advice.

Thank you, that makes me feel better. no one in my entire group of very experienced kayakers knew that or shared it with me. All I heard from other qcc owners was they had trouble making it turn. It takes a few sweep strokes to turn it, but it turns fine with a combination of edging. I wouldn’t use it on a river again. But we’re in the ocean so I don’t have to make hairpin turns. wish I could find a way to make sure the skeg stayed up when I wanted it up. It keeps coming down unexpectedly. I bought a doodad that holds the cord tight to the cleat, but even that let the skeg down somehow.

Long boats with little or no rocker are always somewhat difficult to turn quickly. The are designed to go straight and fast. Edging helps somewhat.

The original line and cleat for the rudder are not optimally matched in many of the QCC boats. My wife cut off the end of the line and spliced on a section of different diameter line to fix the problem. I forget whether this was larger or smaller. She has also had a problem with the tortuous way that the SmartTrack rudder cables are run at the foot pedals. The cables were constantly fraying and breaking. We finally replaced them with Sea-Lect (formerly Sea Dog) foot pedals. Working fine so far.

I was thinking of splicing a larger diameter piece of cable to the existing one that won’t stay in the cleat. I just hadn’t yet gotten another piece of larger diameter cord. I was hoping my little stop doohickey would hold it in place. It’s better than without the doohickey, but it failed me and I found the skeg was down when I didn’t want it to be at one point. So yeah replacing the cable is probably the best bet.

Roughly how the bottom of the hull rises from the center towards the stems. Racing hulls have minimal, most hulls have some, and whitewater hulls tend to have a lot.

for example, lots of rocker: 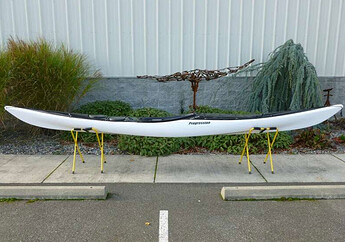 Notice that the “not so much” picture is a QCC kayak. But it’s deceiving. I have a QCC 600X like LaShin, and it does have some rocker and turns surprisingly well. I also have a Pygmy Coho shown below and it’s a lot harder to turn than the QCC.

I’ve been told mine is a touring kayak, not made to be very nimble.