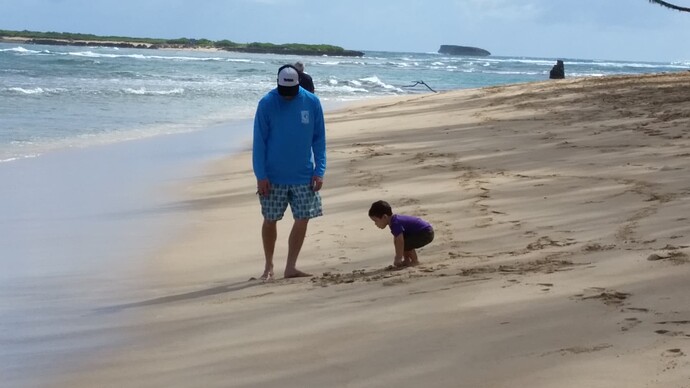 So I thought I’d share what I learned about paddling in Hawaii. Technically I had tried surfing in Hawaii 15 years ago and thus had hand paddled near a beach in Waikiki. But hey, that ain’t quite legit for someone professing to wanting to paddle in all 50 states. So I forced myself to go back for over a month, and be a tourist and meet my great nephew who is two years old.

First off, Hawaii is very much a swim culture. Not a pfd culture. I stuck with what I knew and wore a pfd. The water is warm (although I expect you could still get hypothermic if you were in it a long time- think hours rather than minutes).

I stayed with a resident and friend of the family who grew up on the beach. In her words “the only people who wear pfds are tourists and small children”. Being somewhat child-like, and being a full-fledged tourist, I always wore my pfd while paddling and readily admit that if I went out swimming beyond a buoy I liked having a pool noodle with me.

I do understand how a pfd could prevent you from diving under breaking waves and make your life more difficult (think surfing or playing in a shore break). I did see one surfer on the North Shore wearing a helmet. The only people I saw paddling with pfds were very small children and tourists- no helmets on anyone boating. I did see ambulances around Sandy Beach- think boogey boarder beatdowns.

I think Duke, the big kahuna, is probably the major influence for the “swim culture” present in Hawaiian paddlesport. Not likely to change anytime soon. They’ve got a statue of the man and there’s no debate about tearing it down cause he ain’t wearin’ a pfd, that just ain’t gonna happen. What has been defaced with red paint is the Capt. Cook Monument on the big island and I’m pretty sure that has nothing to do with pfds. 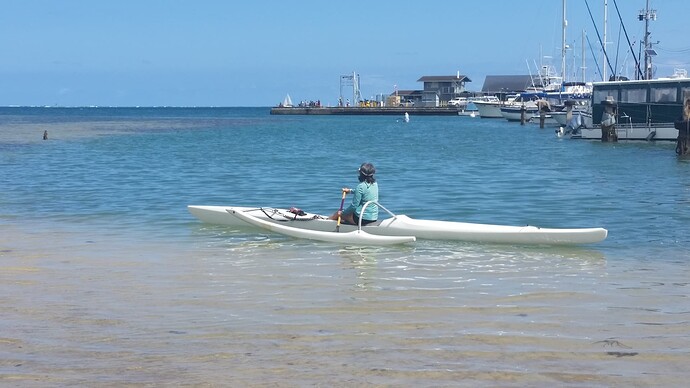 What I drooled over- high end carbon fiber 1 person outrigger canoes. I never got to paddle one but would have liked to. The big heavy team outriggers looked like a social event- definitely confined to one area, with regular buds training together for an event or race. Pretty much a social club on the water. 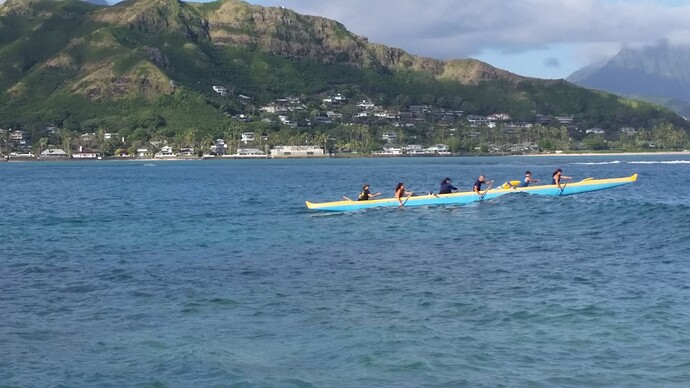 What I passed on- surfing and stand up paddle boarding. Lots of sups, some people swimming on them more than paddling. I left supping to my younger more physically fit nephew. I’ve SUPt before and knew I totally sucked. Add a few waves, some artificial hips and a beer belly and I’m sure the result could have been down-right comedic and involved an ambulance if a shallow reef was nearby. So I just didn’t SUP. 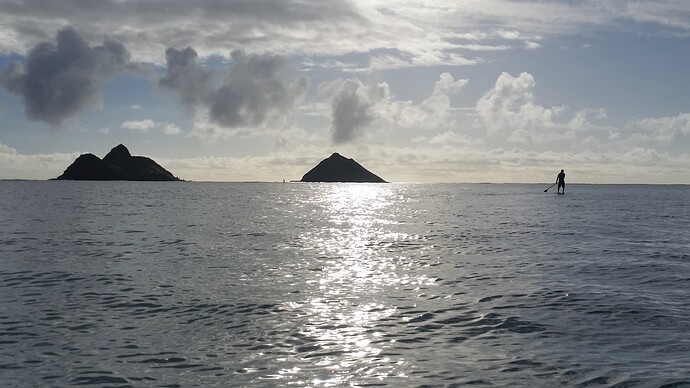 What I did do- sit on top- the first one (borrowed) leaked badly although I readily admit that I saw the cracks before heading out and went anyway. That trip just got cut short a bit. 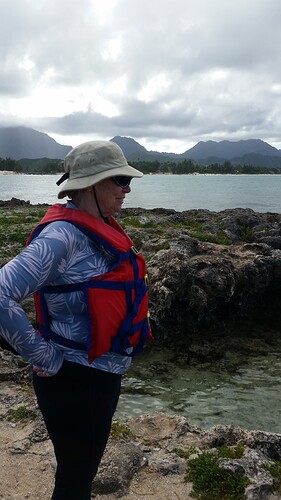 I guess my nephew needed an excuse to buy a boat and purchased a new sit on top while I was there. Two trips in Kaneohe Bay- one to the sandbar and the other just offshore of the Marine base. My nephew paddled tandem with me once but then preferred to SUP and let me paddle solo on the next couple of trips. 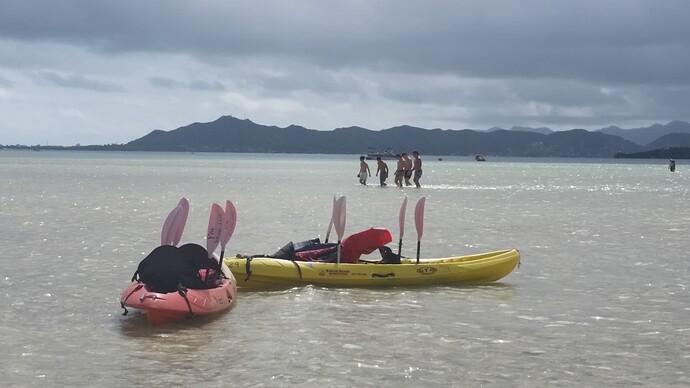 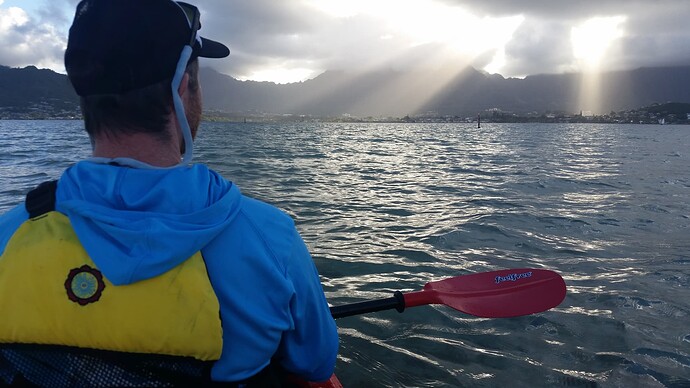 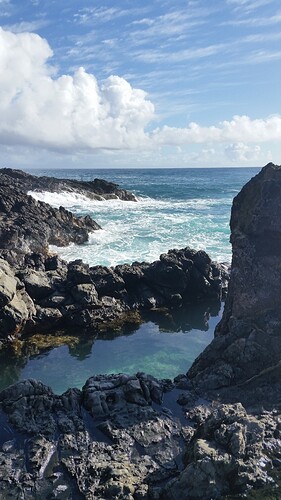 I guess the highlight was paddling to the Mokes from Kailua. Beat the crowds and went early. Apparently even Monk seals detest the kiddy pool. The one I saw buried his head in the sand, I’m sure he or she was feeling ashamed when he saw me and that we were hangin’ out together in the kiddie pool. 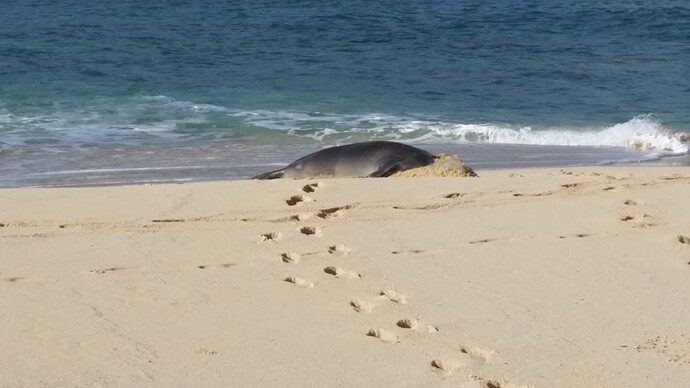 .
I learned about trade winds, how to stay in protected areas inside the reef, and basically how to stay in the kiddie pool and admire others playing just outside the kiddy pool.

Wildlife- on the water: just turtles, in the water, snorkeling:- lots of pretty fish and coral. On land: mongoose, stray cats, pigs Including one large boar, goats and I got a pretty good view of a whale while on shore (big island, pahoa).

Local beta was great and a real plus for both hiking and paddling. If you’re on a budget it is possible to camp (I camped 3 days on my trip and scoped out several camping areas for future trips). I didn’t have to rent a sit on top but they are available on Oahu by the day or week and they even will supply a soft rack for a rental car. I relied on my nephews pick up truck for boating.

I spent a week on the big island and almost 4 weeks on Oahu. I would go back and paddle the bay to Captain Cook (good snorkeling) or Two Step if I had more time, but instead I did a commercial tour from Kona to see the sea caves up-close and snorkel. I probably saw more that way because I wouldn’t have ventured as close to the coast in a kayak although the bay itself looked pretty manageable in a kayak.

best drink: kailua passion at Buzzes
best meal: lau lau plate lunch sold by resident in a local neighborhood near temple valley
best beach- it’s all good, try them all out! Some are good for walking, some for snorkeling, some for swimming, and some for just hanging out!
best hike- Lanikai pillbox (make it into a loop)
best tourist shopping- Hilo farmers market (big island)

I hope the paddling police on this site don’t degrade your great memories.

rnsparky the kiddy pool can’t be degraded- pee away, the water’s always warm there

Been to Hawaii several times. Daughter and her husband lived there for 4 years. Nice gig if you can get it. They lived in Kailua on Oahu. Son in law was in a OC-6 club and I did a few training sessions with them. Outrigger canoe clubs are many in Hawaii, as are the races. Had the opportunity to paddle an OC-1, took me a bit of time to understand the dynamics. And it was fun surfing waves on it.