Level-6 reviews a knock off of their dry suit

Level-6 bought a knock off of their dry suit which they purchased from Amazon, and did a review of it. Even if the comparison of a Chinese knock off to their product doesn’t interest you, there is a lot of insight into how a quality dry suit is made. 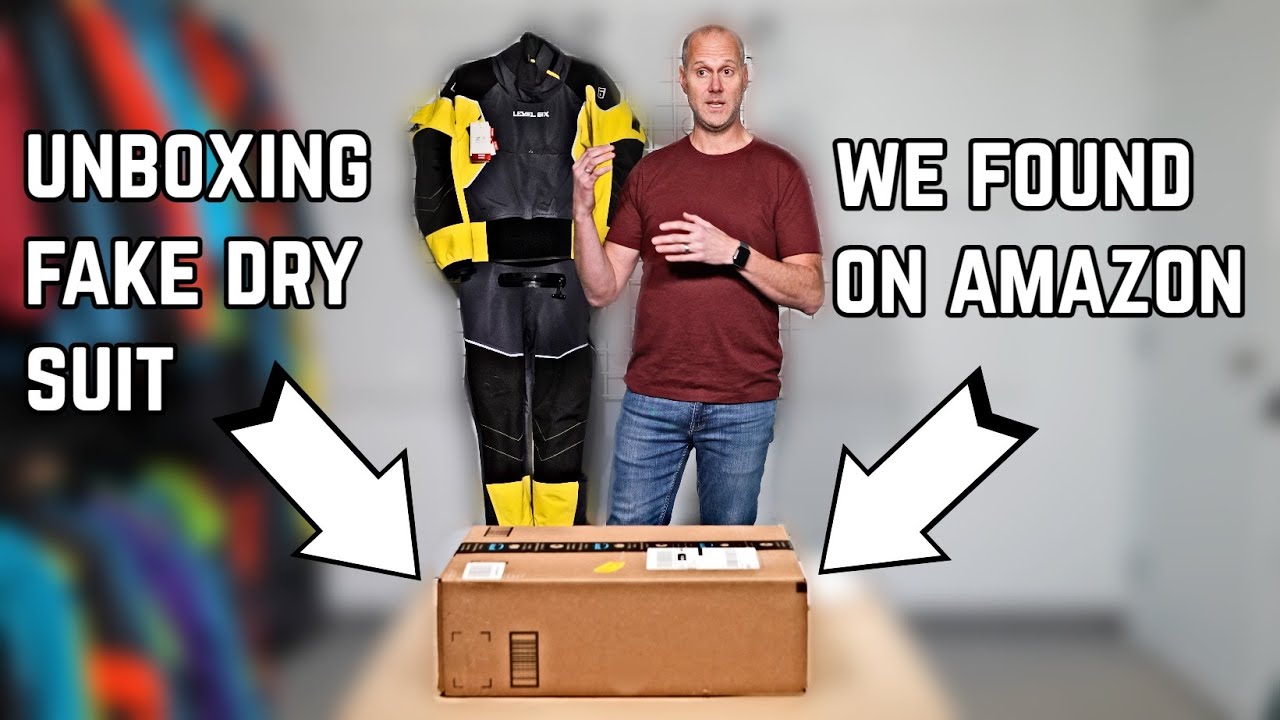 Knock off crap that kills. Thousands of products like this.

Impressive.
Quality comes from a passion, love, and skill at what you do - that surely comes through in his ‘review’ of the knockoff.
Sure, his may cost twice as much, but what you get is so much more that twice as much.
I enjoyed watching it, even though I am no longer in need of a drysuit (even in the ‘colder’ parts of FL, it doesn’t get that cold). I remember those days of playing in the winter surf at Westport, WA (wearing the requisite ‘body condom’).

By buying the real thing you also get the satisfaction that you are not supporting the theft of someone’s hard work. Wether it’s a dry suit or a Rolex either buy the real thing or don’t buy one at all. There are cheaper alternatives to both without poaching a brand name that took years of hard work to build.

And you not contributing to the CCP & Military

I’ve bought many knock off things from aliexpress and have been very happy with 80% of them. the other 20% is junk, but a good 4 out of 5 things I order from AliExpress are 90%+ as good as the brand name, and often 40-80% less $ for often the exact same item. A lot depends on the item though. Any clothing from Ali has been junk. Hard goods or things that come out of a mold have been nearly spot on. Seems like if humans assembly it, the quality is poor. If a machine makes it, the quality is comparable.

I wouldn’t use knock off stuff for anything critical to life though, which a drysuit definitely is, and is hand made so follows my theory.

All the chinese knocks offs on amazon piss me off though. On AliExpress I know exactly what I’m buying and the risk im taking regarding knock offs. When I buy from amazon I expect some degree of product vetting, but its getting taken over with the same knock offs as aliexpress.

Edit - I should say I have a Kokatat drysuit and definitely value quality where it matters (they warrantied it for free, so it already paid for itself more than once). Same for a top of the line O’neill wetsuit I have - it is much, much better than cheap wetsuits or knockoffs.

The term “knock off” in the original post refers to counterfeit products that either outright claim to be the original or are deceptively similar to lead purchasers to believe they are the original. The sale of such items is fraudulent and illegal and hurts companies that invest in research and quality improvement.

If @MCImes in your post now use “knock offs” to mean products that look similar to the original and clearly do not claim nor deceptively lead purchasers to believe they are original, I would have to agree that a lesser manufacturer might have a product that meets a purchaser’s needs. But buyer beware.

I’ve found that, more often than not, I am disappointed in the non fraudulent knock off’s quality and end up spending more time in frustration and more money in higher frequency of replacement.

It sounds that you have had a better experience with non fraudulent knock offs than I have had. Perhaps you have a much better ability to discern quality differences on the web than I have ever had. It does sound like you’ve thought it through extensively. So that’s good for you.

Good point.
Fraudulent is always bad. They advertised it as Level6 but gave you chinese crap.

Knock off can go either way. A recent purchase that has gone very well is titanium cookware. I picked up an extensive set for half off, but a machine made it, if my fork breaks its not the end of the world, and it wasnt expensive. If I spent $600 on that suit, I’d be pissed (or maybe just dead considering how much it leaked and how sketchy the latex and zipper were)

I’m not sure the “machine made it” distinction is a good guide. A machine just does what humans tell it to do. If a company wishes to knock off a product and make it cheaper, it sets a machine up to make the product look similar to the original but without all the features that drive up cost. We saw all the design errors of the counterfeit in the video of the original post.

Something like your cookware have fewer hidden design features, so I can see a company being able to get closer to the quality of the original. If the copying company can legally use the same materials and functional design, it saves the cost of research and design. If however the legal knock off company pulls sales away from the originator such that it cannot compete, that economic activity depresses innovation and research.

Your cookware may not have the same materials or be made by the same processes as the original but performs satisfactory for how you use them.

And, hopefully, this economic activity is not capturing sales by purchasers who would have spent the extra money for the original anyway.

The pressure test and peeling tape was impressive.

Wether or not the counterfeit item distracts from sales of the legitimate item is only part of it. Someone in the market for a new Rolex won’t settle for a knockoff. We can say the same for Louis Vuitton. So no sale is lost? Not so fast. What it does is cheapen the brand name. Louis Vuitton and Rolex spend a small fortune each year in pursuit of counterfeit products help protect their brands. If the counterfeits did not represent an economic threat they would not pursue it.
Rolex and Vuitton are the two most recognized brands in the world. They are also the most copied. Both of these companies provide excellent skilled jobs. Spending 1k dollars for a wallet or 8k for a watch might seem ridiculous to many but nobody is forced into making these purchases.
When you feed into this market you are providing funds for all kinds of bad things. It’s an estimated 1.7 trillion dollar cash market. There are plenty of links between this market and global terror. The guy your buying some cheap Oakleys from at the local flea market might not be a bad guy but follow the cash and it will undoubtedly go through some bad hands.

I’ll get off my sop box in a moment.

One more thing to consider. Even if this counterfeit was as good as the original consider the company being hurt here. If not for the sake of Level-6 and it’s employees then for the sake of this hobby as well. If they can not make a profit they will not continue to research and improve this sport. Research and development are not something that counterfeiters specialize in.

Really interesting. Good information on what to look for in a drysuit.

Back in the late 2000’s, I spent some time in Shenzen. I needed to buy some shirts and asked for a recommendation to a local colleague. He asked if I had a shirt that I liked and if I wanted to make copies of it. Like in asking a tailor to copy a shirt. Very well, I chose a model shirt, we went to the tailor, dropped the model, and went back the next day to pick up 3 copies for a ridiculously low price. I couldn’t believe the price and how fast they were made. When I got home, I noticed a small defect on the copies. Actually, all of the 3 copies had the same small defect. I mentioned that to my local colleague and he told me to check my model shirt. Sure enough, the defect was on the model shirt as well! That’s how good the copies were.

Back to Level 6, unfortunately, by now, the knock off manufacturer might have watched the master class and improved his product spending zero in R&D

I was in Suzhao?, China for work probably 15 years ago. The expats took me to a shop that sold North Face. I bought parkas for my kids and as far as we could tell, they were the real thing.

I was working throughout much of East Asia for 2 years (based in Seoul). Another expat, with more experience than I, explained that some of the cheap “name brand” stuff you see are knock offs, as in cosmetic replicas. They try to replciate the looks of the item, but not all the functions. I have a couple of Rolex and similar replicas I bought as jokes. From a distance, they look like one, but don’t have most of the special functions (not water resistant, not self-winding, etc.)

But sometimes you also find the real product. The factory will have the workers work an extra shift and make extras products they don’t send to the ordering company, and instead sell those products themselves. More likely in products of larger companies that place orders from multiple suppliers.

The dry suit is closer to a replica, but really just in marketing (product didn’t have the Level Six branding, just tried to match form and function)

So amazon doesn’t care they sell fake dry suit with the REAL: level 6 pictures. Is that not fraud on Amazons part? Did the owner contact Amazon? Do they even care. What else is fake on amazon then? If your buying a name brand lion battery pack is it Fake or real? How about memory card for your camera Fake or real. I know on Ebay never buy a memory card there all fakes BUT now too on amazon?

Because that’s probably where northface had them made.

Yeah, the factories that make the stuff we buy make them for pennies on the dollar. And if North Face orders 100k jackets from the factory there is no reason the factory can’t make 200k of them and sell the rest in China as long as they don’t add the North Face logo.

The Level 6 product engineer has now told the guys in China how to make a better copy.