Loading 2 kayaks on factory rack: how safe is it to exceed wt limit?

We bought our vehicle (CR/V) before I knew I’d get totally obsessed with kayaking and before we knew much about racks, so we bought a factory rack with the car. The installer put the bars closer together than I’d like, but it’s been ok for 1, 17’, 60lb kayak on Malone Seawings

The bars say the weight limit is 100lbs, which is absurdly low in my opinion, but it’s what I’m stuck with for now. But also, now my daughter wants to go with me. I’ve taken her 60lb 13’ Riot Edge alongside my current ~50lb kayak to local place 10min from my house on city streets. And I’ve traveled distances with 2 kayaks along highways, but I’m wondering if I’m pushing my luck.

What’s your opinion on carrying these 2 kayaks at highway speeds? I’m exceeding the posted weight for the bars by 10-15 lbs, including the seawings and Yakima saddles, so it makes me nervous. My partner assures me it’s fine because the engineers will have built in large tolerances 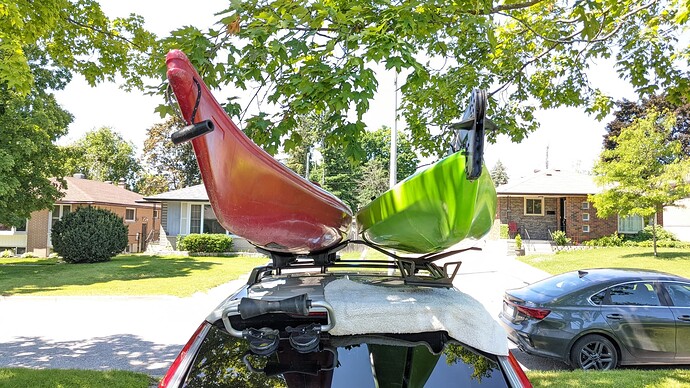 Keep in mind that the dynamic weight due to wind and rough road may far exceed the static weight limit. However, if it’s a Honda roof rack, it’s rated at 165lbs according to many sites online.

Steel scaffolding has to take 4 times maximum allowable load. Ladders are the same I think. Rated for 100 lb. I’m sure they have a 10% and way more designed in. My Excursion is rated for 120 I think maybe 100 . 100 pound Libra tandem looks to be too much.

Also loads may have to be directly evenly spread on the rack like when the rated scaffolding.

I’m sure engineers figure all those loads in at normal speeds.

10% over I personally wouldn’t worry.

My Libra XT tandem I strap a foam kayak block to the hull just behind the windshield to relieve some weight. Roof has no flex there.

However, if it’s a Honda roof rack, it’s rated at 165lbs according to many sites online.

It is a Honda roof rack, and I’ve seen that around the internet as well. But weirdly mine has a sticker on it that says 100lbs. I wondering if has something to do with tolerance limits in Canada vs US.

100 pound Libra tandem looks to be too much.

Yes, a friend has a 100lb tandem (can’t remember the model) that they’ve offered for my kiddo & I to try, but at 21’ long, they’re worried about the weight, but mostly the spacing on the rack. They’re going to bring their trailer out for us to try that boat

Tandems are great if they’re long enough so there is no paddle sync when going.

Doubtful it’s a world wide rating I my opinion.

Rumors spread easy on the internet. 165 lb is very rare as I remember looking at new vehicles.

Googled it and it says look in the owners manual. I did see Honda rated at 165 but it’s not manufacturers data.

I’ve gone over with various cars. There does seem to be some safety factor built in.

That said, there are some steps you can use to reduce issues. First is to use bow and stern lines (or at least bow line). There is an added sheer force as you drive, especially at speed, trying to rip the rack off from front to back. Bow line would help reduce this by holding things from sliding back.

Keep the speeds low. You are less likely to have trouble on a short trip on back roads than on highways at speed.

I always use bow and stern because otherwise I spend my drive craning my neck up to watch the kayaks! I don’t trust anything on the roof all that much unless it is ridiculously secured, generally speaking, which is why I’m more worried than my husband is about this

thanks for your advice everyone!

I’m in agreement with @Peter-CA assessment and have little to add to it.

What I will add is you are smart for questioning your setup as I think everyone should do that each time they leave the driveway.

First off a car today is not what a car was 30-40 years ago. A canoe or kayak is for the most part quite similar to what it was then. We didn’t go from 10MPG to 40MPG just with better engines we got there in large part by cutting the weight of the car 50-75%. We also live in a much more litigious time and a higher paced time. My dad or grandfather might have loaded a couple canoes on the roof of his 2 ton station wagon and strapped them down. When I asked how do you know they will stay on he would just wink at me for my answer. So I would ask my mother the question and she would say your dad just knows these things. Then you would load a few coolers and lots of gear and the family of 5 would make the 30 mile trip to the mountain lake for the week and top speed was maybe 40MPH. The reason they stayed up there is the same reason the house he built totally by hand is still standing 70 years later just to mention 1 of 100 things most of us no longer do ourself.

Today we buy a car made in Korea and a rack made in China and have it installed by some kid that making minimum wage. The car is not designed with boats in mind and the car manufacture knows people want roof racks because the car is so small to start with but really doesn’t want to take responsibility should any one of a million things go wrong. Same reason trucks are not really designed to mount a snowplow to even though everyone does with the addition of frame and suspension strengthening members. So they put a pretty light number on the specs they can feel safe will CTA. The rack makers leave themselves other loopholes.

In the end it boils down to common sense of the person driving the car and do they feel confident in what they are doing. I never asked my insurance provider how it would work if I had two 16’ canoes on the roof of my KIA Soul and was doing 70MPH on the interstate and they blew off and killed someone behind me. I would assume it’s the same as if I have a load of plywood in my truck and it falls out and causes damage. I’m sure with a boat it could get sticky and weights and specs would be looked at. But in the end it is a personal responsibility to do everything you can to do it as safely as you can.

Where I live I cringe every time I’m at our takeout location and I watch people load boats in the craziest of ways I wouldn’t conceder safe. The people I see I truly believe are doing what they feel is right and safe even though it isn’t close to what my requirements would be.

Could you get a trailer hitch rack to take some of the load and to give more distance between the support of the kayak? You would have to get a trailer hitch added, but find a local welding shop that does it (less expensive than dealer, just find one that is experienced) and search for “hitch canoe carrier” there at are variety of types out there.

Factory cross bars usually top out around 100 pounds or not much higher.

The bearing weight of the front to back rail, raised or flush, usually is higher. 165 pounds sounds like at least right depending on the mount that is running into it.

I would pay the most attention to the mounts into the rail, and after that how the cross bars are affixed into that mount.

Tl;Dr the higher the load the sooner you’ll have to replace the rack

The load limit should be a dynamic limit, because one assumes car racks are on cars. Your failure mode is fatigue, which is tricky at the best of times. So fully loaded, you’re rolling a standard die and if you roll 1 it’ll break, if you roll 6 it’ll last forever, anything else it’ll last long enough you’ll be happy. Over loading the rack is like subtracting one from whatever you roll, so it’ll break early with a 1 or 2, otherwise be fine.

Reducing any force going into the bars will help. Bow and stern ties, slower speeds, avoiding bumps, stay out of crosswinds, no emergency brake checks or jackrabbit starts. Don’t add any more weight over than you need to.

In the 70s, you could load bars with the same rating 3 or 4 times and they’d still last forever (engineered to be a die with 6 on every side). Engineering with computers instead of slide rules let us get a lot more optimized on what the actual load ratings are, how many decades people expect them to last, and how much they cost to manufacture. The factors of safety are a lot tighter than they used to be.

I don’t work in boats or racks or cars, but I’ve done a lot of failure analysis and wrestled with fatigue not being nice “easy” math

consider what would happen if one of your boats flies off your car on the highway.

This is nicely comprehensive, thank you. The frequency with which I carry both kayaks is very low, and typically very local and slow (for now), my 9yo doesn’t go out in the wind, and always with bow and stern lines, so I think I’ll be ok. If any of those factors change, it looks like I’ll need to upgrade to better racks.

You would have to get a trailer hitch added, but find a local welding shop that does it

The most recent Honda CR/Vs are designed for easy installation of a tailer hitch kit. Hitch kits run under $150 and installation as low as $100. With a minimum of mechanical aptitude and a few basic tools this can be a DIY job. Kits include all necessary electrical components.

You would still need the kayak carrier itself plus any other components like saddles, rollers, etc. Probably another $300-350.

Personally , I have little trust for factory setups. I would just skip the factory rack altogether buy nice set of Thule towers and bars. You will get a better weight capacity and probably a wider cross bar.