I have been wondering how some of you load your boats because there cant be that much trouble unless you are trying to do a military press and set it on or toss it like a javelin. My hooks are a bit higher, but this is just like loading a ladder on a fixed utility truck rack. Start in a standard carry. Put the front in the cradle, move the rear to the outboard side and ground the rear. Lift the rear and swivel until the boat wants to ride the Jhook. Push until the boat is on as far as you want it. Then seat the rear in the rear Jhook. After you put the front into the front Jhook, at no time are you lifting the full weight of the boat. This one is 68lb as per specs. The saddle of the Jhooks are about 8 foot off the ground. No I am not the smallest bear in the forest, but the female can load the Easky LV in the same manner, she just needs a little height addition at the rear. If it was 7’6" she wouldnt have a problem. There is no reason why the same technique wont work on a 5 foot tall roof. You will have to put your Jhooks farther outboard so you dont scratch your paint.
This is the way I do it and it should sure work on a lower roof or a van roof. You could probably lay a towel on the van or roof of you dont have enough boat to make the angle from the front hook to set it on the ground. 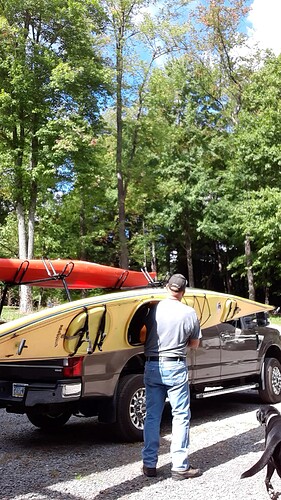 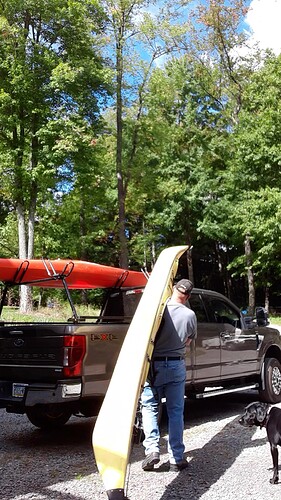 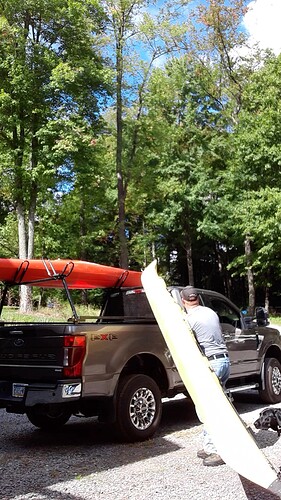 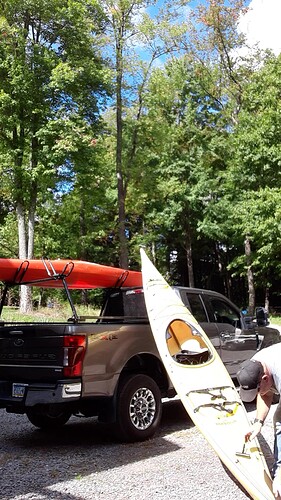 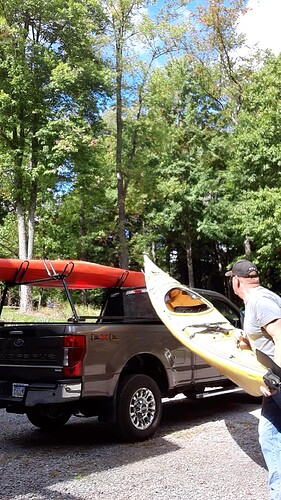 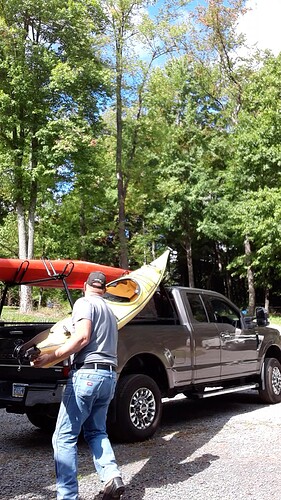 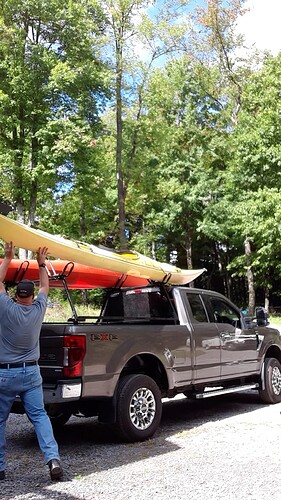 Or, just get some Hullavators! 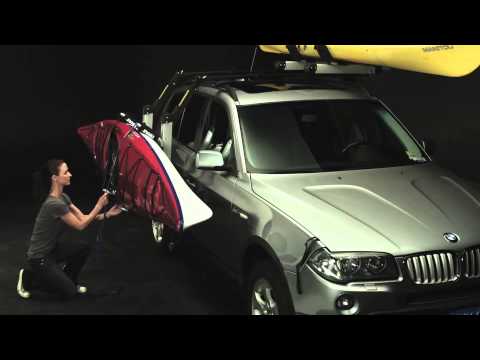 Why not just use the same method but begin by placing the bow on the rear saddles and lifting and pushing forward?

That method or yours would not work for my truck. The side rails are 81" high and I can’t even touch the stern of my boat when it is in the saddles. I use the precarious method of leaning a six foot step ladder against the front rack support and climbing up with the boat and putting it over the side. To load from the back would take a third pair of saddles or padding on the rear crossbar, and even then I’m not sure I could get it far enough up from the ground. 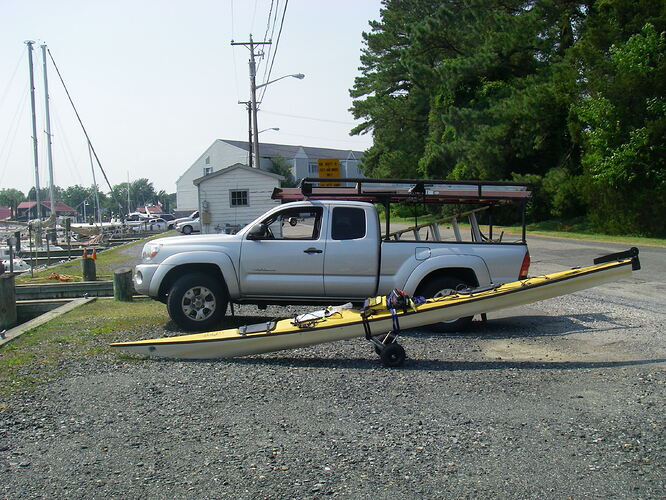 This was at the end of 34 mile circumnavigation leaving from St. Michaels, MD harbor on the Miles River, around Tilghman Island, and returning to San Domingo Creek. From there it’s about a half mile carry back to the harbor.

When not carrying a kayak, there would normally be at least a 28’ and 16’ extension ladder where the saddles are.

Unbelievably, in spite of thousands of pictures taken since I started kayaking, I don’t have a single picture of the kayak on the truck. Now kayaks are usually carried on a Subaru Forester. Easy to load from the back with one person, or over the side even with two relatively short people.

If you put the bow on the aft cradle, and pushed, at this height (which a discussion on trucks and carrying brought up the question of carrying high) you would be holding around 50lb with one hand that was trying to pull you up and rolling to find its happy place. That would work on a lower set and as long as you had the room to not “f” up your paint and wanted to push 15’ through, go for it.

Sure it would work on your truck. All you would need is a upright to brace the bow against when you set the bow against the truck and a milk crate to correct the height problem. https://www.youtube.com/watch?v=bawVQ7fkOfA&feature=emb_logo 81 inches is less than 7 foot. The bottom of my Jhooks are at least 8’. I have seen 5’6" women load 28’ fiberglass ladders on a 1500 van using the same method. https://www.youtube.com/watch?time_continue=19&v=PQQ2oEwTD20&feature=emb_logo

because with a car that size you could save a lot of money and aggravation by setting your J hooks out and swinging the boat up. There are no gas pistons to quit on you and no hinges to fail.

After 7+ years the pistons and hinges on my Hullavators are just fine.

@700.00 per boat. Never said they dont work, but there are options where you wont hurt yourself and are a lot less expensive.

Sure it would work on your truck

If you will note, the saddles are on the front and middle rack crossbars, not the rear crossbar which is five feet further back. I suppose that I could pad the rear crossbar or get an additional pair of saddles, but I’d also have to do something to protect the stern from damage from the pavement. I’ve repaired many boats where the owners have ground a hole in the tip of the stern over time loading from the rear where they have to set it down on the pavement before pushing it forward.

I’ve loaded many 28-40’ foot extension ladders from the back by pushing them forward. The only way to do it actually. I’m only 5’5".