I’m in the process of trying to sell my Wenonah Kingfisher and getting a solo canoe suitable for daytripping on calm lakes and rivers, maybe some very light rapids, but nothing technical. All I need is enough room for a backpack, light fishing gear, and a 10 lb. dog. I do canoe 1-2 times a week, so she won’t be a garage queen. I was considering getting something like a Wenonah Wilderness or Esquif Echo, but a listing on Craigslist for a Curtis Vagabond caught my eye.

It was manufactured in 1989 and looks to be in great condition from the pictures. In doing some research, Curtis/Hemlock makes great canoes and it sounds perfect for me, but I don’t know enough to make a decision on buying a 30 year old canoe vs new. I was hoping someone could give me insight on what I can expect in terms of durability especially with wood gunwales which I have no experience with. Thanks!

It’s a great boat and you should go buy it. It’s quick and cruises efficiently. There is typically no issue at all with a 30 year old boat unless it has been stored outside in the sun and weather since water will rot wood if the wood is left dry and unprotected (with oil or varnish). The construction quality of the Curtis boats is arguably every bit as good (or better) than the best boats on the market today. Many older boats clean up to “like new” with just a good scrubbing and a quick light sanding and oiling of the wood.

I think the main practical questions are your total weight (note the catalog saying it’s best if kept to 225-250 total) and whether you plan to kneel. The seat will probably be set up (high) for kneeling and kneeling adds stability so if you plan to sit instead of kneel then you’d likely have to lower the seat to keep it from feeling tender since it is a narrow boat.

You can even call the builder (Dave Curtis) at Hemlock Canoe (www.hemlockcanoe.com) with any questions since he’s a great guy.

Follow the link below to find an original Curtis catalog page for the Vagabond. 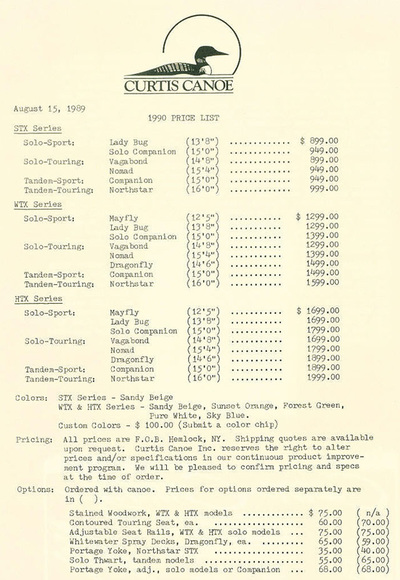 Thanks for the response. I weigh 170, so I think it’ll fall within the designed weight limit. I’ll definitely take a look at this canoe. I just need to sell my Kingfisher before buying.

I bought a Curtis Canoe LadyBug (fiberglass, vintage 1987) last spring and after cleaning, lightly sanding, and oiling the gunwales, thwarts, and seat frame it looks pretty good for a 33 year old canoe. The gelcoat has several areas where surface cracks are noticeable, especially areas where the hull is more flexible. At first I considered trying to rehab those areas but I think I’ll end up just repairing the few small spots where the gelcoat has chipped away.

As for the Vagabond’s performance and handling, I bought a Hemlock Canoe Kestrel (precursor to the Vagabond) last fall and haven’t been out paddling with it all that much but enough to get a good feel for it and I have to say I love the boat. It’s relatively fast (compared to a Wenonah Advantage) and relatively nimble (compared to a Curtis LadyBug) with stability somewhere in-between, so for me it fills the gap perfectly. The one thing you’d want to consider is the fairly low freeboard, which isn’t much of a deterrent unless you’re paddling in choppy waves and/or trying to load up the canoe. If you have some experience with whitewater paddling or small whitecaps it shouldn’t be a problem. Otherwise, just avoid whitecaps. =)

PS: I did end up replacing the seat because the webbing was shot. I replaced it with a Conk standard seat. I found it to be much more comfortable. My wife typically paddles the Kestrel sitting rather than kneeling and she finds it works well.
http://www.hemlockcanoe.com/conk-contoured-seat.html

I have Kestral and it’s a great boat, but I have to imagine the Advantage is much quicker .

The Advantage is definitely faster that’s why I described the Kestrel as relatively fast in comparison. I took the Kestrel out with a carbon bent-shaft paddle one day and it would get up and go pretty well, holding its speed fairly easily with 5 or so quick strokes per side. I was actually surprised at how well it did with the sit-and-switch technique. I still prefer to use a straight-shaft paddle and kneeling in the Kestrel but if I wanted to get somewhere quick I could see sitting and using a bent-shaft blade and putting in 10 or 15 miles without much effort. It’s not an Advantage but the Kestrel is plenty fast for just messing around in a canoe. =)

I also sit and lowered the seat with longer drops and use a Zav paddle and find it to be a great day boat. Some here might trip with it in the Lake region of the ADKs