Hello all first post here, but long time lurker. Due to some recent changes I’m having to move to a much lighter boat if I want to continue kayak fishing. I’ve paddled/pedaled a wide variety of kayaks for the past two decades, with the majority being SOT, but a few SINKs thrown in, and actually currently looking at sit insides, because they do run lighter, and I am a minimalist who doesn’t need a lot of gear, and because I started in a little Necky way back when , and I do enjoy “paddling” and actually loathe big stable SOTs, because they are so far removed from what I started in. I’m 5’11 and currently 165, but moving slowly back up to my normal weight of 185ish. I fish flatwarer fresh and inshore salt, and in various weather conditions year round. I’d like to stay at 12 to 13 feet and about fifty pounds, both for weight restrictions with lifting and storage limitations. I’m looking at the new Pungo 125, but it looks so “recreational”. I’m intrigued by the Tsunami 125, but worry about freeboard with no skirt and choppy water. It gets hot and humid in VA during the summer, and even though I’m a minimalist, I think a skirt will be a hinderance. I’ve ruled out the Jackson Tupelo, because of the foam wall in bow, and wide stern. Eddylines seem nice, but I worry about beating them up. Any advice between the Pungo 125, and Tsunami 125 is appreciated, and any other boats I should look at is appreciated.

This may be more than you want to spend, but the Eddyline Equinox made out of Thermoform plastic is 14’ with two bulkhead compartments, and weighs in at 45 pounds which is lighter and longer than the two boats you mentioned. It should be more seaworthy and faster. It just seems a more versatile kayak.

The Equinox strikes the perfect balance between stability and performance in a transitional design.

If that is too long then take a look at the rest of the their recreational boats. The Skylark 12 is 2 feet shorter and an inch wider weighting in at 41 pounds. If I had the room I would go with the equinox for better performance.

Thermoformed kayaks would be one way to get lighter.

I am not familiar with the Tupelo, but caught note of the foam wall you mention. What is that? Do they fill the bow with foam? This would be one way to add flotation and deck support, which could be good. How would this be bad for your needs (besides that it takes away some potential storage space)? The Tupelo LT looks like it is thermoformed, and the video I saw on it says it is very light. Comes with mounting rails for fishing equipment, which could be useful in your usage.

The Pungo ultralite versions are also the thermoformed versions, so lighter than the standard rotomolded versions.

If you want to go all out, there is a company in South African that makes composite fishing kayaks - Stealth Kayaks http://stealthkayaks.co.za/. Not well distributed in North America, but maybe you will be lucky and have one near you?

I actually looked at the Equinox and the new Sandpiper 130. The thermoform thing scares me because I’ve heard, and not sure how true it is that pressure on the “V” can crack them. I’m in a lot of tannic water and from time to time find myself getting stuck on unseen downed trees, stumps, and cypress knots, I’m not sure if that is enough to do it, but don’t want to find out. I like Eddyline as a company, and have admired their gorgeous boats for years, but worry about damage.

Do you require a deck? Pack canoes are essentially undecked kayaks and paddled the same as a kayak.
They are usually very light coming in under 30 lbs for fifteen feet and proportionately less for 12 and 13 feet

Some are very strong… I run my Placid Boat Works RapidFire over oyster bars with nothing more than scratches… Nothing says hull hate like an oyster bar.

For this lightness of boat though you go light in wallet… The most economical are by Hornbeck Boats. A very long time boat builder in the Adirondacks… Just take a look http://www.hornbeckboats.com/boats.php

@Nery said:
The thermoform thing scares me because I’ve heard, and not sure how true it is that pressure on the “V” can crack them.

I have no personal experience with them. So can’t answer your worry. I do know some folks really like them.

How fast will you be paddling? I have an Eddyline Samba and Fathom LV which I’ve run into underwater hazards with no damage. Paddling a river each time, but not going fast. My Fathom did get pushed into some rocks during a surf landing on Lake Michigan. I was coming in fast and had the force of the water behind me. Made a lot of scary noise but no cracks, just a good sized scrape on the hull. I also had a Skylark which was dropped from four feet onto a concrete floor. That one just bounced, that’s all. Bulkheads remained solid and boat is now enjoyed by its new owner.

While thermoform is tough, it can be cracked. I know of a salvaged Eddyline which was damaged when something was dropped on it during a house remodel, resulting in a cracked hull. The (wealthy) owner was just going to send the boat to the local recycling company and buy a new Eddyline. I think it’s either a Merlin or an Equinox (will see the boat next week), now sitting in an unheated building till next spring, when it will be repaired and enjoyed by the family who rescued it.

Just mentioning this because the material is not delicate.

BTW, whether I’m paddling a thermoform or composite boat, I carry flextape and duct tape.

Thanks Rookie that is reassuring to hear

I’m very much a minimalist when it comes to kayak fishing. I use a Tarpon 120 SOT for the rough stuff (At 63, I don’t do that much anymore). For all other kayak fishing I use a Pungo 120. While it is a recreational yak, it works great for fishing. They are fast, stable and in the poly version, tough. The open cockpit is a huge plus for fishing. I’ve tried to fish out of smaller cockpit boats, but to me they are too confining. I don’t care for the colors the Pungos now come in, but other than that they are still my favorite kayak. Check out my Pungo 120 review (8/9/18) under reviews on this site. Good luck finding your new boat!

Kayakbasser… I definitely agree with you on the new color ways seems like they are targeting a different demo. I wonder too if the new Pungo 125 and Tsunami 125 have much difference in speed. I’m sure the Tsunami has a slight edge in efficiency and would give a more pleasurable experience paddling wise, but pragmatically the Pungo is probably a wise choice. I was measuring the shed and with some creativity the Tsunami 140 could fit, but watching videos, that cockpit looks a bit confined especially once the heat indexes get up there in the summer months.

The Tsunami 140 will paddle great, but be a lot harder to maneuver. I also have a Pungo 140 and I only take it when I’m mostly paddling. The 120 is much easier to turn, and is almost as fast as the 140. The 125 Pungo should be interesting.

I have a 120 and 140 Pungo
Fast, stable, and roomy. And comfortable. Go for it! Mango is a good color, at least compared to the others.

Threw romance aside and ordered a Pungo 125, fingers crossed their hull tweak makes it feel like a longer boat

Thanks for letting us know. What color?
Romance?

I’ve been using a 14 ft Hornbeck pack canoe for ten years. It’s so light, @26 lbs, it practically put’s itself on the car and has good speed when you need to cross a large body of water in a hurry. 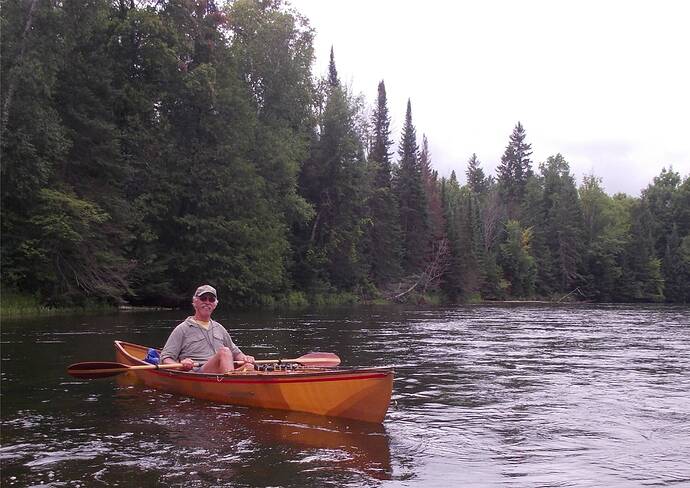 @string said:
Thanks for letting us know. What color?
Romance?

By romance I was just referring to making a pragmatic decision. Instead of a sleek light sexy Eddyline, I opted for the cheaper slightly heavier poly Pungo that probably suits my needs better. Ended up with the Atomic color. It was between that and Mango, and the Atomic just seemed a bit more “muted” to me. I wish they would have kept there old color schemes, or just plain solid. I think though I will get a dedicated touring kayak down the road rather than trying to have a jack of all trades boat.

Motobobp
That pack canoe is a neat alternative, but I prefer a little cushier seat. Too many years of lifting heavy things has the back a bit fickle

Catch the big one with it! It’s a popular kayak, I have friends that own pungo’s. WS are known for their comfortable seats. If you ever need to go light, that 14 foot Hornbeck with a WS seat might be a future option.

I caught one of our hard core sea Kayakers at an out of town outfitter loading a new Pungo.
You could buy 5 Pungos for the cost of one of his sea kayaks. Even the hard core sometimes appreciate extra room and comfort.