Thanks for that link, Rookie. I have kept up with the thread even though, as always seems to happen, it veered off into mostly Brown/Gizzly bear info and stories.

Fantastic article! Lynne Rogers (quoted in the article) has been a great source of information about Black bears around the Lake. There were also some helpful side stories accompanying the main one with Black bear info.

Let’s hope the Spirit Bear is alive somewhere in the bush.
Cheers,
KayakerBee

szihn,
Thank you for the idea of bear spray at close range. It is the best route and probably what most people should carry.

It had not been invented when I worked in Alaska.
People need to stop under estimating black bears.

There have been two near New York City in the last 20 years
One toddler was eaten and a hiker killed
My husbsnd hitva blackie weighing 350 lbs in 2009 mangling my new car.
He was in New Jersey 13 miles from the George Washington Bridge

Yes, there have been several fatal black bear attacks in Ontario and at least one in New Jersey, far from any brown bear territory. While these attacks are undeniably exceedingly rare when considered as a percentage of human - black bear encounters, they are documented.

We had a fatal black bear attack in Southwest Indiana, where I now live. A fellow had raised a black bear from a cub and kept it caged on his property. He had fed the bear every day and it obviously knew him. One day it decided to kill him by closing its jaws on his head. Who knows why? He was brought in DOA to one of our level II trauma centers on a night one of my partners was on trauma call and he described the incident to me.

My take is that if you think you can predict what an individual bear will do in any given scenario, think again. You might be right 99.9% of times basing your prediction on prior observed behavior patterns. But bears are inherently unpredictable.

People seem to often think of bears as big “cuddly” creatures and forget they are predators.

I like to ask them if they were to come across a 100 pound dog they didn’t know if they would do anything to risk making it mad? If not, why on earth would you do the same with a “small bear”?

Yes they are unpredictable, but not as unpredictable as a lot of city dwelling people. In 9 times out of 10 the “problem bears” are those that felt cornered or threatened by people who didn’t take them seriously or bother to learn a thing about them before they go into their home grounds. Sure they can be “small”, “cute”, " fuzzy", “adorable” and so on…but they are still wild animals that kill things to stay alive and feed themselves. Their claws and teeth are dangerous and they are about 3 to 5 times stronger pound for pound then any man.

Please enjoy their existence when ever you can, but don’t press your luck with them. Take pepper spray and if you know how to use one well, take a powerful firearm, but before anything else take a large load of common sense and get some education on what they do, how they do it, why they do it and how they act and think.

The better you understand them the less chance you or they will have a problem.

All that said: Remember that in 9 times out of 10 the problems can be avoided, but that 10th time you had better be able to defend yourself. They are no joke.

A timely conversation.
Yesterday a sow and a cub showed up in my neighbor’s yard. I live in Nevada in the Sagebrush Ocean near the Sierra Nevada Mountains. Between the recent large fires and the drought bears have been displaced. They are showing up in odd places like my neighborhood.

A friend saw 2 culvert traps being towed by Nv Dept of Wildlife trucks recently. I called today to find out if they are releasing habituated bears in the area or trying to trap them. The answer to this question matters . Habituated bears are going to become pests. The Pine Nut Range behind the house is marginal bear habitat. Their best chances to find food are going to be garbage, small livestock, and fruit trees, bird feeders and pet food left out.

I have friends in the Carson City Sheriff’s Office and also 2 who retired from Nevada Division of Forestry. The tell me that from Mt Siegel all the way through Brunswick Canyon and the areas around Mexican Dam Road clear to to Deer Run Road, there are more bear sighting and encounters now then there ever has been in the last 70 years. 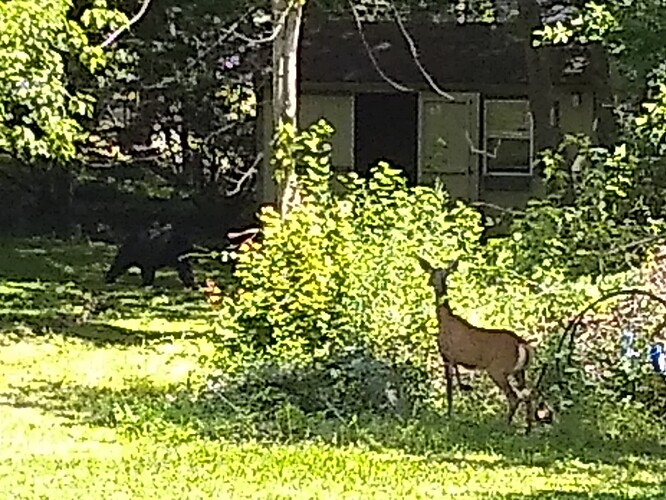 Scares me. Can’t tell if its standing still for the picture or if its a still picture. Close up, it look skinny.

On second glance, I notice you have a pet bear.

more than one, and no, they don’t bother to poop in the woods lol. That’s a young mama deer, she brought her two fawns along the next day. Thinking she was nervous about the bear finding them. Seems we have more bear than deer the past few years.

Your posts remind me of how much I miss the woods and fields. The smell of moist forests and grassy fields, hay-scented ferns and brightly colored mushroom.

The contrast highlighting the dear reminds me of a solo drive on the Blue Ridge Parkway late one evening. I came across a fearless doe and its fawn, grazing along the roadside. I approached slowly and fumbled for my phone. The fading light made it hard to crop and shoot he scene through the passenger window from the driver seat. I took the shot when they overlapped, but it was highly pixelated. In the next shot, I managed to get a better exposure, but that surreal shot most reminds me of the intimate moment. No fear between us. 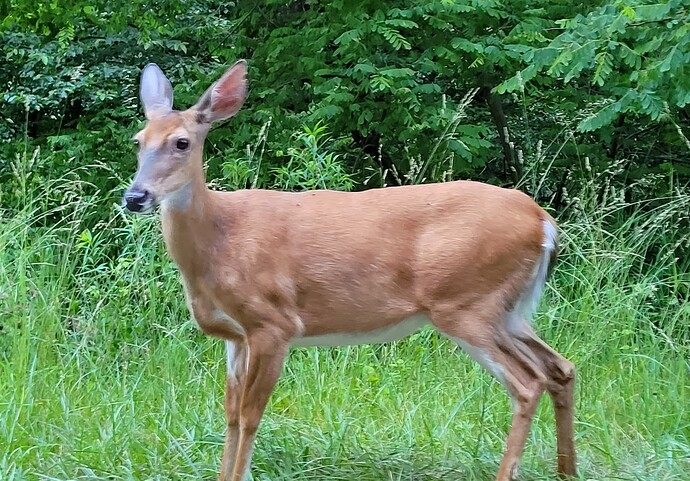 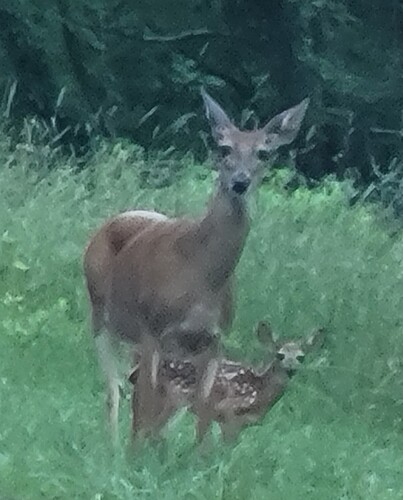 You’re in a good place.

In the woods, fields, and water we’re always in a good place per a study done in Europe.

as long as we’re not drowning or getting eaten, anyways…