Looking for our first kayaks

My wife and I are looking for our first kayaks and we’re not sure what’s best for us. We prefer sit on tops and we plan on using the kayaks for gentle lakes and rivers. She is shorter at 5’1" and I am 6’2". We are not sure what length kayaks would be best or what brands for that matter. We’re looking to spend no more than $600 per kayak, but we are flexible if it’s worth it to spend more. What can you all recommend?

Hurricane Skimmer or an Eddyline Carribean would be matches for both of you . They come in different lengths. BUT, not for $600.
I got good deals on mine because I looked for factory blems or used.

It’s always worth it to spend more, as with anything. You will need different sized kayaks (unless you are like the Jack Sprats: weight affects kayak volume as well as paddler height – the boat hull has to displace a volume of water that balances the weight of the kayaker).

Have you read the articles under the “Learn” tab on the site? Much excellent information for the first timer in what to look for in a boat to suit your needs. It will help a lot to read through the basics.

We often recommend beginners seek used kayaks for their first boats. You get far more “bang for your buck” and the truth is that you will not know what you really want from a boat until you have paddled for a while. A used boat of decent quality can almost always be sold again for close to what you paid for it. As with cars, new boats lose a substantial percent of value as soon as you take them home. Again, familiarizing yourself with the fundamentals of boat design and how it affects performance through the site education articles will be helpful. With sit on tops, a lot of safety concerns are not as critical as with sit insides, but there are still some ultra cheap sit on tops that are not a good choice due to low quality and poor stability. Both of you are on the small and large end of the size range and cheap boats tend to be “one size fits all” which means anybody not in the mid range is not going to have a good fit. Better boat manufacturers make a range of size models to suit the paddler. Some common good brands are Wilderness Systems, Riot, Perception and Ocean Kayak. Lesser discount brands are Pelican, Lifetime, Sundolphin and Lifetime (often found in Walmart and hardware stores!). A used one from the “good” category would be preferable and the same price as a new discount boat.

Be sure you also budget at least $120 to $200 for good paddles. You and the paddle are the “engine” of the boat and it is better to have a good paddle and a cheapo boat than the other way around. And you should count on $70 to $100 for a comfortable and good quality PFD. Another advantage of buying used is that sellers often throw in the paddle and PFD, though proper sizing of those is also critical.

If you do prefer to buy new, try to find a dedicated wilderness sports outfitter or kayak shop. The Big Box sporting goods stores are rarely staffed or equipped to offer experienced guidance and the best advice to new paddlers.

Depending on where you live you may be able to find an outfitter who offers on the water demos, though the pandemic has limited a lot of those options. Unfortunately the newest version of this site eliminated the location information it used to have as an option for site members so unless you tell us we can’t know where you are. Taking some intro classes in paddling technique and safety is also a good idea but may be difficult in the current circumstances.

Also check on your state requirements for annual permits on kayaks so you don’t snag a fine your first time out.

Google Best SOT KAYAKS and you will get a comprehensive list. Beware of any that are under $500.
On that list is the Perception Pescador . I think it is a good boat for the money.
I recommend a 14’ boat for someone who is your height and my daughter and my paddling partner are about your wife’s height and do fine in mine.
A concern for a small person is being able to reach the water with the paddle so boat width is a factor.
A good SOT for a smaller person is the RTM Disco.
Head swimming yet? The research is part of the fun.

You’re not going to get anything very good for $600. You may have heard the phrase, “buy once, cry once”, meaning that you have to spend more than you planned on, but will wind up with a boat you’ll get long-time enjoyment from instead of wanting to get rid of it quickly (and losing most of your investment in it).

These days just about anything that will keep you happy is going to run closer to $1000 or more.

Be sure to look at inflatables, too.

Hi, thanks for the great input. We found some used kayaks and we’re looking at them later. One is a Heritage Redfish 12’ SOT and the other is an Ocean Kayak Scrambler 11 SOT - both for $1000 total. Do you think these are appropriate for us? Are we getting ripped off?

Depends on the condition but if good, I think that’s a good price.

I can’t comment on the Redfish, but I had an OK Scrambler and I liked it quite a bit, except for the hull slap and that it was a little sluggish. I’ve had it on Class 2+ ww and 3’ chop on Lake Erie, and it was stable and easy to maneuver.

Those sound like reasonable prices. I don’t use sit on tops so I can’t comment on those models nor whether they would suit you. But the site linked below has recommendations on used price ranges for fishing kayaks and seems to indicate that is a fair range. IT appears the Redfish was $750 new and the Scrambler was $600. So $1000 for both is not bad (figure $600 is for the Heritage and $400 for the OK.) The Heritage is a fishing targeted kayak so it has more outfitting and is larger. IT would be an even better deal if they threw in decent paddles but you would not get as nice boats new for $1000. 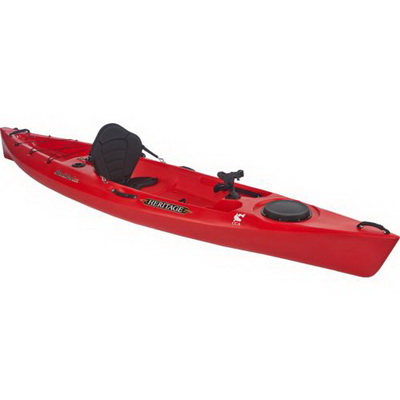 They are actually including paddles and a little cart to help wheel around the kayaks in that $1000 price, but no seats. I don’t know about the quality of paddles, but they’ll have to do for us for now. We are buying our own PFDs and I just ordered some Ocean Kayak Comfort Plus seats.

Sit on tops with molded seats usually don’t need an additional seat. I would wait until you get them to worry about spending more money on something not needed.

If the paddles are cheap metal shaft types with big plastic blades you need to invest in better ones. The paddle and you are the engine of the boat and a heavy badly designed paddle can ruin your enjoyment of the water. A decent fiberglass shaft Werner or Aquabound will run you $120 to $200.

They can also be found used if you are patient and diligent (you need to know what size works for you). I just consigned 2 of my extra paddles to a local outfitters used gear department which they will sell for $60 (a fiberglass paddle) and $120 (a lighter carbon fiber paddle.)

Second WL paddle comment. My first was a 240 cm with an Al shaft and plastic blades. It must have been a Survival model because you could dig holes and split firewood with it.
After one short trip, I took it back and got a fiberglass shaft/ nylon blade model. 100% improvement in weight and handing.

Have you thought about how to transport them yet? Note that someone on another board here recently tried using Malone J-racks with their SOT. Not working out well. Think stackers or something that leaves them tipped back a bit.

I was paddling around a small local county park lake some years ago and passed near the dock where an outfitter rented kayaks – worse than the usual concession, with very low end rec boats and, much worse, absolutely awful paddles, the $29.99 Dunham’s discount boat anchors with heavy metal shafts and massive flat black plastic blades better suited to shoveling horse puckeys than paddling.

I came even with a young couple in a pair of those clunky boats and overheard the guy pleading with his female companion to “keep going, this will be fun” as she complained, long and loud, about how much she hated what he was making her do. I decided to butt in and glided over to ask her if I could take a look at the paddle she was wrestling with. She handed it over – the thing seemed to be like 250 cm and must have weighed 4 pounds. I reached under my deck bungies and pulled out and clicked together my spare, a carbon shaft Aquabound 220 Sting Ray and suggested she try it. Gave her a couple of tips on technique and after a couple of strokes she literally took off. Her beau (or husband, I didn’t ask) and I watched her power off and I told him maybe I better go after her, handing him her rental paddle.

By the time I reached her she was breathless and had a wild look in her eye. “This is the bomb!” she cried when she saw me. I laughed and told her I was glad she now knew what kayaking was really all about, also mentioned the paddle was probably worth more than the kayak itself. She begged me to let her keep using it and I told her she could hang on to it for the remaining time that she had on the rental boat. (the lake was so small they were really never out of my sight so I didn’t worrying about them swiping it.)

When we rendezvoused at the dock an hour later she had done a 180 on her earlier attitude about kayaking and was insisting to her partner that they HAD to buy their own kayaks and good paddles. The guy looked worn out from keeping up with her.

I’ve run into a few people over the years who appreciated using a better paddle, but that one was the most memorable.

WL, I’ve done the same thing three times. I was in a group with several beginners and a cute girl( young woman) was having a terrible time until I gave her a few tips and loaned her my back up paddle. Drudgery to happiness.
Happened again with another young woman several years later. I couldn’t help the lousy craft she had borrowed but the paddle made her day.
The last was an older guy in a Dick’s bathtub. He showed up on a chilly day in jeans. Overstreet’s wife loaned him some waterproof pants. I remember him hitting the sides of the boat on every stroke for 16 miles even with a better paddle. He had to be exhausted, but made it on his own.

I’ve taken to telling people who say they only have $500 to spend to get into kayaking: Spend $150 on a paddle, $100 on a PFD and $200 on the kayak (preferably used.) The $50 left over will be for a pair of flotation bags if the cheapoid boat lacks bulkheads. If the boat doesn’t need them, rejoice and save that $50 towards the kayak you will eventually upgrade to.