Cates said nine people went into the river upstream from a Duke Energy dam just before dark Wednesday night. He said everyone was floating on their own inner tubes when they went over the dam.

“People usually get out before the dam,” Cates said.
We still don’t know why the tubers did not get out of the water before reaching the dam.
Near Eden NC. This is a pic I found of it but don’t know if it’s the one as part of it was being demo’d. 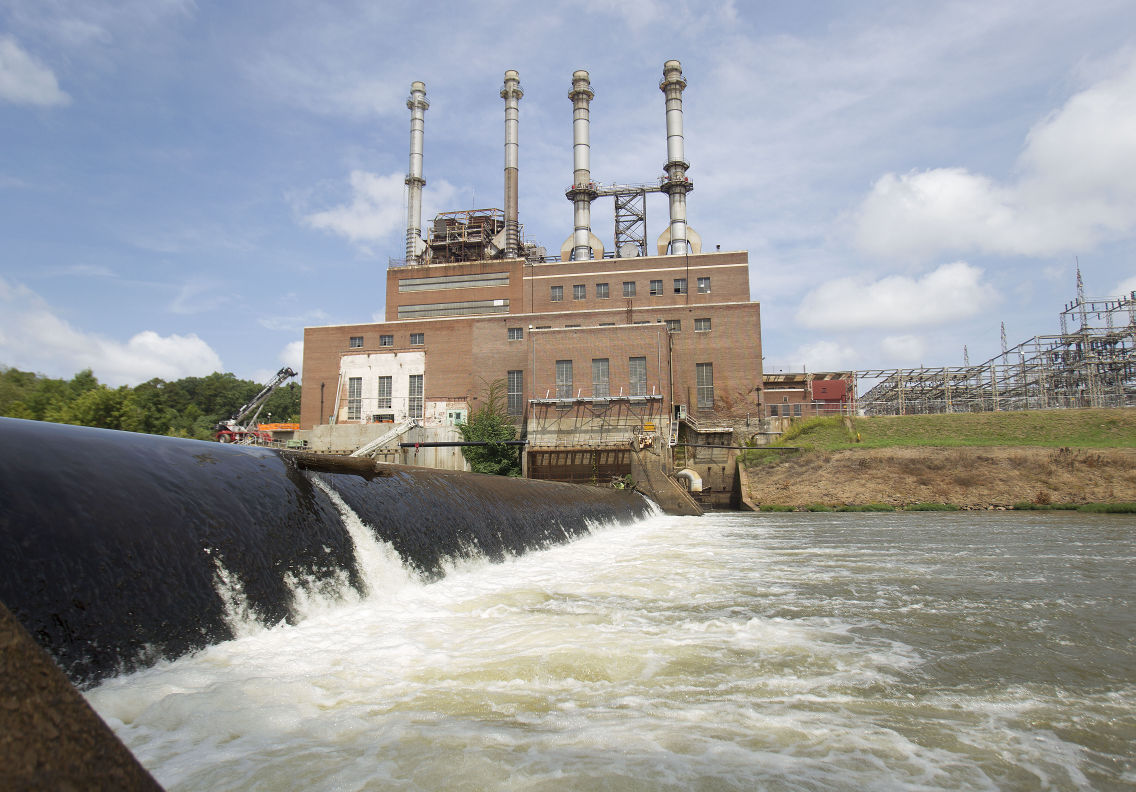 Perfect drowning machines with a big reversal.
Do not run them.

Nine people went over Wednesday night. Three are dead and 2 missing. Four were rescued the next day. The missing 2 could potentially be trapped in the hydraulic is my guess or just haven’t surfaced on the river. Would be wonderful to find them alive. Very foolish thing to have happened. I wonder if they just thought it would be a fun 8 foot drop with no idea of the danger. No info of the ages or what happened yet. A needless tragedy.

Other reports state there are various warning signs. Inexplicable why they didn’t heed them. Am guessing tubers don’t wear PFDs. So awful for those who loved them.

I think the USA should systematically modify or replace those low-head dams to make them passable or at least survivable.

Very foolish thing to have happened.

There was a railroad bridge going across the wisconsin river in sauk city WI. On the town side, the river greatly narrows and the current there should be warning enough as there were always whirlpools there. People drowned there, seemingly some every year. The locals knew not to jump off of the bridge there, but non locals didn’t. The yearly drownings seemed to be paying homage to the river god or something…until some local kids did it. They should have known better. Once they drowned, the bridge on that side was taken down and barbed wire all around the stub that was left on land.

Seems like people just don’t know.
And those that should, sometimes just blow it off and go.

I’ve never seen them wearing any. Most of the ones I’ve seen are people drinking and floating or families out w/kids floating. They look at the tube as their life saver would be my guess and really, IMO that’s what they are.
However tubes would be the worst thing to go over a LHD as you won’t do anything but flop over the side. Be interested to know if they were drinking beforehand or not.

I think the USA should systematically modify or replace those low-head dams to make them passable or at least survivable.

I don’t know if there’s a plan, but a lot of these LHDs are being modified or removed. Usually it takes a drowning of locals or group to do it. The problem is money. There are a lot of these in the midwest and east and the rural areas don’t have the cash to do it while the govt pays more attention and cash to urban areas.

I don’t know I would call it foolish. To someone without knowledge of low head dams they look pretty benign.

If I were a betting man, I would bet money that the group involved in this fiasco was young, and were drinking.

I’d be surprised if those who aren’t accounted for also drowned in the hydraulic, and their bodies caught in debris at the bottom of the hydraulic, or downstream.

There will be a lot of greiving family members, who will suffer needlessly, because of poor decision making on the part of the participants in the fiasco.
Sad to say the least.

The fox story makes it appear they didn’t know what they were doing and what they were in for. I wonder if there was any signage where they put in? I did another thread about a nice level I-II river in wisconsin. But if you look at a satellite view, the river goes around an island, with dams on both sides. On the left side, looks like there’s a string of bouys put out crossing the river, so there must be a LHD with a chute for some generation there.
On the right side, where you’re supposed to take out, there’s a big LHD all the way across where there’s a fast bypass right after the takout at the park.

If you just put in above with the idea of floating down the lazy river, not knowing about the LHDs in your path–and there were no sineage warning you of them and their dangers…you’d be in trouble. If you did it in tubes you’d really really be in trouble. OK, dead.

A number of the news articles mention that there were signs above the dam. Either the family didn’t see them, ignored them, or thought that it would be fun going over a dam that was only 8’ high with deep water on the other side.

I suspect that the vast majority of people do not know of the unique danger of low head dams. It’s not obvious by looking at them in most cases.

Most dams have warning signs. Always be on the look out for a straight horizon line indicating a drop. a ledge or a dam.

The smart thing to do is drive up stream along your route during the shuttle to look for obvious impediments to boats like low head dams. Read a guide book. If you get surprised by a dam like this you have really screwed up.

Normally there is a powerhouse, or other irrigation diversions nearby which is your other warning of a dam ahead. This one should be obvious from way upstream.

I have not seen this dam in person. There was a post shared on the Carolina Canoe Club’s FB page that talked about it and included a couple of photos taken upstream of the dam. Many such dams have a cable strung above the river with a large danger sign in red lettering. This one apparently does not have nor is there a float line on the water upstream of the dam. There are a couple of relatively small signs marking the portage around the dam that is a short distance upstream of it as shown below. 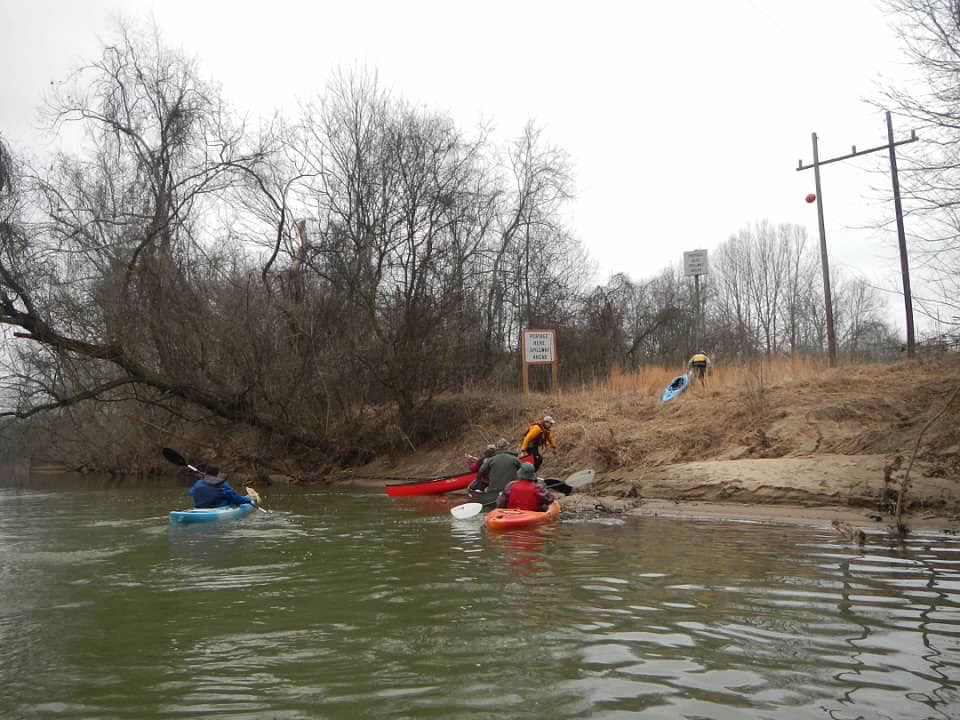 This is what the dam looks like from the water a short distance upstream: 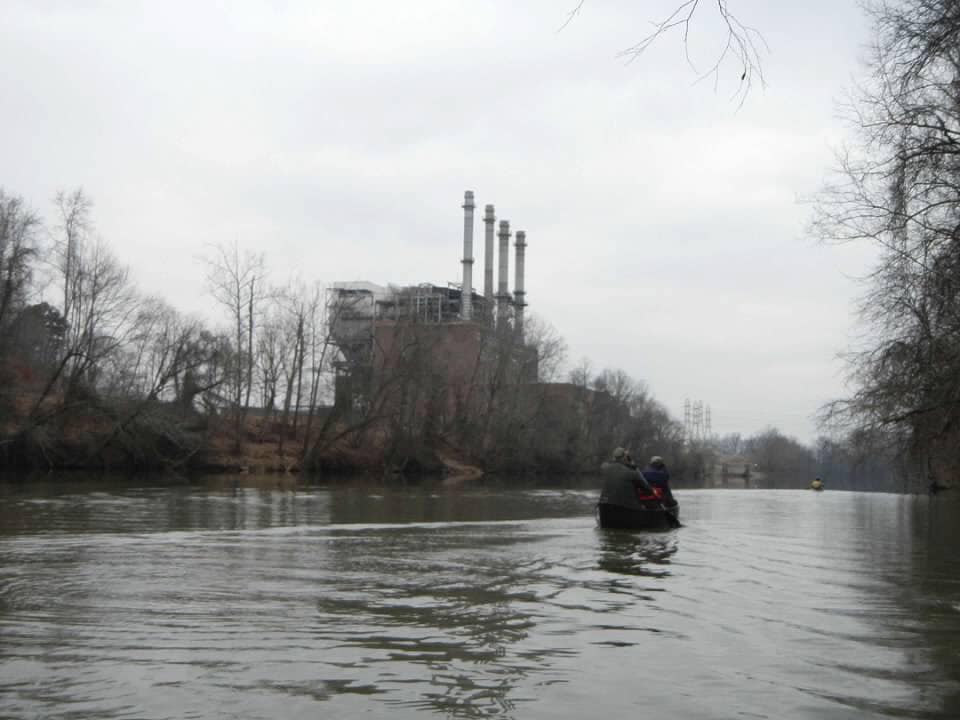 Many such dams have a cable strung above the river

I wrote a subject here where if someone did their research and didn’t go through the articles all the way down, they’d see it’s a class I-II section of the wisconsin river. There are 2 dams there and the one on the left is smaller, has a building on it so I’m sure signs of warning…and that cable with bouys across the river there. That’s on the left. On the right is where there’s a take-out where this section ends. From satellite view, there’s no cable bouys across the river. It looks treed on the banks also. The take-out is at the far right side, by a LHD.
If you don’t make it to the take-out, here’s where you’re going: Me either Mike. I bet people can canoe/kayak for decades and not encounter a LHD.

It would be great for kayak/canoe/tube manufacturers to include a piece of paper warning of low head dams, or stick a sticker on them/the box somewhere so at least it’d give a heads up to people so they can look into what they are.

They would get thrown away. Just like the safety pamphlet that comes with a gun

True, but you spelled “safety locks” wrong.
There has to be a use for those things other than throwing them away.