The button on my two-piece Werner shauna is sticking. Anyone have suggestions for what to lube it with? I have wd40 but also the cleaner and lube for my dry suit zippers (not sure but I think that’s wax based and not oil).

Boeshield T-9 lubricant. You can get a small dropper bottle of it at most large bicycle stores, and some marine supply stores stock it. It’s a lube that does not harm metals or synthetics and that is resistant to moisture and does not get sticky over time. Boeing developed it to use as a lubricant in aircraft that would not harm cables or gum up the works. I use it to lubricate the joints on the aluminum frame connections of my folding kayaks (which fit together like tent poles) and it prevents corrosion, especially with salt water exposure. Works just as well on two part paddle spring-buttons.

Nice tip(s)
For prevention, I do the same, particularly important for saltwater paddlers.
What I do:

“You can keep your Smart-View Adjustable Ferrule System (US Patent # 6881111) working at peak performance by following three simple steps: Step 1. After every use take your paddle apart and rinse both sides inside and out with fresh water. Step 2. Store your paddle hanging apart with blades up. Step 3. NEVER use a lubricant on your ferrule! Our ferrules don’t like lubricants but they love lots of water!”

Love T-9 and use it on my skeg cable, but it does leave a residue albeit not sticky. When the button on my first Cyprus got stuck, Werner told me to use warm soapy water to try to release it. That eventually worked but the spring inside the ferrule was out of whack so Werner replaced the paddle.

Like raisins, I carry a couple of gallons of water but haven’t used that to rinse the paddle; just whatever may be stuck to the hull while the boat’s in my Hullavator along the side of my car. I take the paddle apart at the car, slip it into its case, then rinse at home (again using warm water and sometimes a drop of dish soap), and hang blades up.

Thinking about it, makes perfect sense to just stick the Werner in the car and disassemble at home since I also carry a GP and have room in the car.

I’ve used T-9 on spring-loaded buttons in both break-down paddles and in Feathercraft folding kayak frame longerons (which also have the buttons) since 2002 and never had a problem. I can understand a manufacturer warning against lubricants since many would be inappropriate, but T-9 is very safe for the materials that are used in paddles

@willowleaf said:
but T-9 is very safe for the materials that are used in paddles

T-9 is great but it’s still a lubricant and if Werner says don’t use lubricants on their ferrules, I figure they’re the experts so I won’t. Any other two-piece paddle I own, no problem. For me, the Cyprus is too expensive a paddle to not follow the manufacturer’s instructions.

Happily I’ve had no problems with the ferrule since Werner replaced my original paddle.

It is unclear from this post if the OPer is a salt water paddler. But if they are, and the ferrule is stuck after salt water exposure, just water may not do the job. There are issues from salt water with equipment that fresh water paddlers often get skunked by when they hit the coast. I have not used the stuff myself, but I respect the experience of a seasoned hand about the T-9.

Salt water habits are why I always break down my paddle for the trip home. Leaving it together and not rinsing it will usually not cause an issue in fresh water. But it is amazing how quickly the salt can can cause a problem .after a paddle on the ocean.

Soooo, may matter what caused the thing to get stuck.

FYI, I paddle FW and SW. The stuck button happened after my first outing this year which was SW. I always break my paddle in half when I pack up. But I did not rinse it in FW after packing up. I spray everything off at home but didn’t give any special attention to the paddle so don’t recall if I effectively rinsed the ferrule out at all. The last couple days I have given it freshwater soak and worked the button loose. It is still a bit sticky but works. Fortunately, my finger is just long enough that I can work it up from the inside when stuck. I’ll continue to rinse in the future and hope that helps.

If it doesn’t get back to normal, Werner’s FAQ says: “If your ferrule is still not actuating properly, contact customer service for assistance.” 1.800.275.3311 They’re really good to work with.

Freshwater…always been able with forcing fw and twisting/ pulling motions. …but my favorite is a wood shaft with no ferrals.

The biggest thing is to clean it after each paddle.

If it’s the simple one-piece spring button that most paddles use - which is what it sounds like - the first thing I’d do is remove it so you can clean it completely and clean the hole as well. Just pushing it back up when it sticks isn’t going to accomplish much. It’s a simple matter to push the button in, then grab it with a pair of needle-nosed pliers or hook it with a piece of stiff wire, and pull it out. Once you’ve cleaned everything, you just slip it back into place.

When rinsing, you’ll also find that hot water works a lot better than cold water when it comes to dissolving salt and other minerals.

I use the flat head(as Werner talks about) screwdriver (or more often, my rusty dive knife from my PFD) inside the push it back and spraying pressurized water (standard hose pressure) inside female end. Between popping button out with knife and pushing it back in from outside while rinsing, it has always cleared whatever has jammed it.

I do wash off male end while I am at it.

@RussSeese said:
303 worked on my Werner.

But it did not work on mine and perhaps the application of 303 made the issue worse.

Fwiw, I am a longtime user of Werner’s Cyprus and Shuna. I’d heard of the sticky button/ferrule issue from other paddlers over the last few years, but I had not yet experienced it myself. I normally paddle freshwater with occasional journeys to the coast. Last year my new Shuna started sticking after just freshwater usage, so I tried the 303 ‘trick’ after a local paddler suggested it. I recently was out on the Conn/RI coast and the button on my Werner Shuna became sticky after just one day on saltwater with interesting results.

I normally do rinse my paddles out after each use, if I am able. I had broken down the Shuna after coming off the water the prior day, but logistics prevented me from rinsing it out and I erroneously thought that the 303 would prevent any ferrule stickiness. I participated in a surf session on the next day. While riding a wave into the beach the Shuna came apart in my hands. WTH! To bad no one had it on video, because I’m sure there was a stunned look on my face. It’s hard to throw a stern rudder while holding a paddle split in each hand. Needless to say over I went. Upon washing up on the beach I took a careful look at my paddle. The lock button did not fully deploy into the retaining hole even though it looked like it had. The senior member of our group also took a look. He told me he had the same issue with his Cyprus and ended up sending it back to have the internal mechanism replaced.

When I got back to a friend’s home later that day we tried to free it up the button with hot water, but that did not immediately fix the problem. The button remained very sticky. As Brian indicated I could see that the small internal spring really does not exert much force particularly if it’s even slightly gummed-up. It took over 24 hours of soaking the ferrule in water; periodically working the button externally by thumb; and carefully moving the button mechanism inside the ferrule with a long, small flat bladed screwdriver to free it up.

Lastly, I gave Werner a call. Conversation highlights as best as I can recall:

The Werner customer service rep told me that they changed the internal material, but not the design that is used on the locking part of the female half of the ferrule last fall (2019). I am not sure why just a change in material would supposedly reduce this problem? Werner offered to retrofit the new mechanism/material for about $55 if I send the paddle back to them at my cost. At the moment I will pass on that.

Detergent makes a good lubricant that washes away with water so leaves no residue. I am glad to learn about T-9 thanks for the info. I will use it on my folbot frame.

Castoff – good idea to use on the Folbot. I’ve used T-9 religiously on all of my folder frames (6 models so far, 3 each Feathercraft and PakBoat) since getting my first one in 2002 and have never had a problem with “frozen” joints. I keep a zip-lock baggie with a couple of small cotton rags and a little T-9 drip bottle with each boat in the repair kit. It does get a little messy during set-up so I place a rag under each joint as I lube it – but T-9 doesn’t hurt any of the components or skin when you drip it so it’s more an aesthetic thing…

You guys made me check my Cypress. Button is fine. But I do tons of fresh water rinse from the salt water time…

@willowleaf said:
Castoff – good idea to use on the Folbot.

A good friend in Gainesville FL gave me his Folbot Super in 1985. He bought it new in 1977. I was the person that always paddled with him. I moved to SC in 84 his wife didn’t paddle. They wanted to spend time alone together, and asked if we would keep their two kids for a week while they went to the NC mountains. We had 3 kids of our own so hardly noticed 2 more. He offered me his boat for doing so, and I said he didn’t need to do that. He said he didn’t use it any more and knew I would. So I ended up with it. Gave it to my son when I got into sea kayaking. Now I have it back. Needs the wood varnished and cleaned up. Your mention of T-9 is timely. It is sort of a cross between a tandem kayak and decked canoe. Here are a couple of photos of it back in 2011 on Juniper Springs run 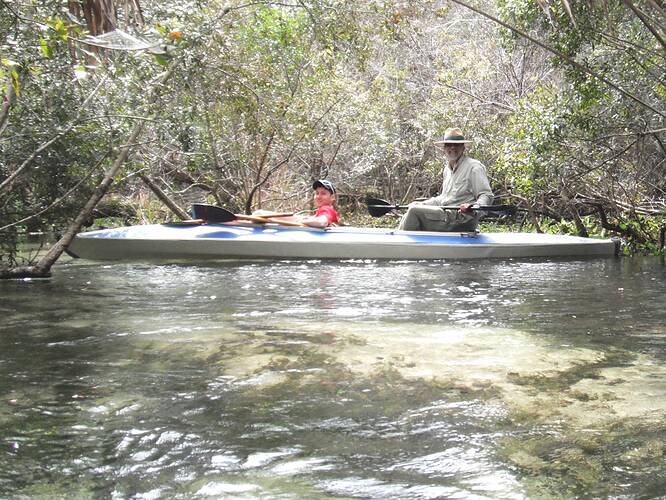 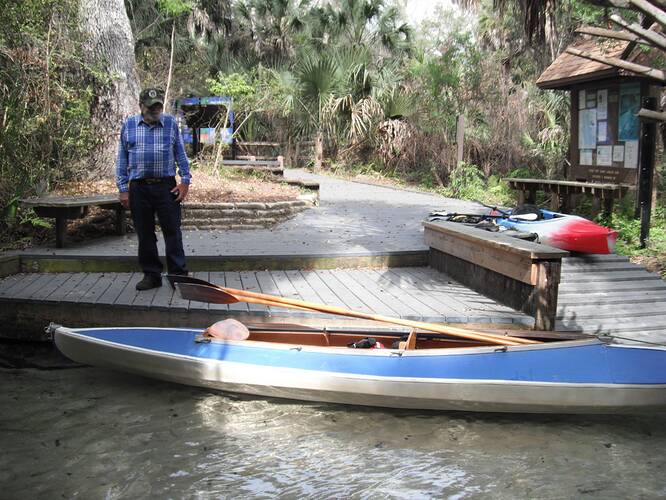 Mine had a green deck and yellow Hull. And many adventures.