I’ve been asked several times over the years about the Lutra paddle, I suppose because I have had one since 1984 and mention it occasionally.

Led by flat water “sport canoeing” gurus such as Mike Galt, Pat Moore and Mickey Landry, the Honey Island paddle was one of the first big blade paddles of the 1970’s. One branch of sport canoeing evolved into what’s now called freestyle canoeing. Galt told me in 1984 that the Honey Island paddle was mainly a collaboration between Mickey Landry of New Orleans, as designer, and the Blackburn brothers of Atlanta, who made paddles. Honey Island is apparently a spot in the swamps near Landry’s former home of New Orleans. Galt gave me a used Honey Island 15 degree bent when I bought my Lotus Caper from him in 1986. It has the logo “SEA-1”. Here is a picture of the very first Honey Island Cruiser, the straight paddle version, taken by Mike Jones of Cricket Paddles, to whom Landry had sent it for restoration. 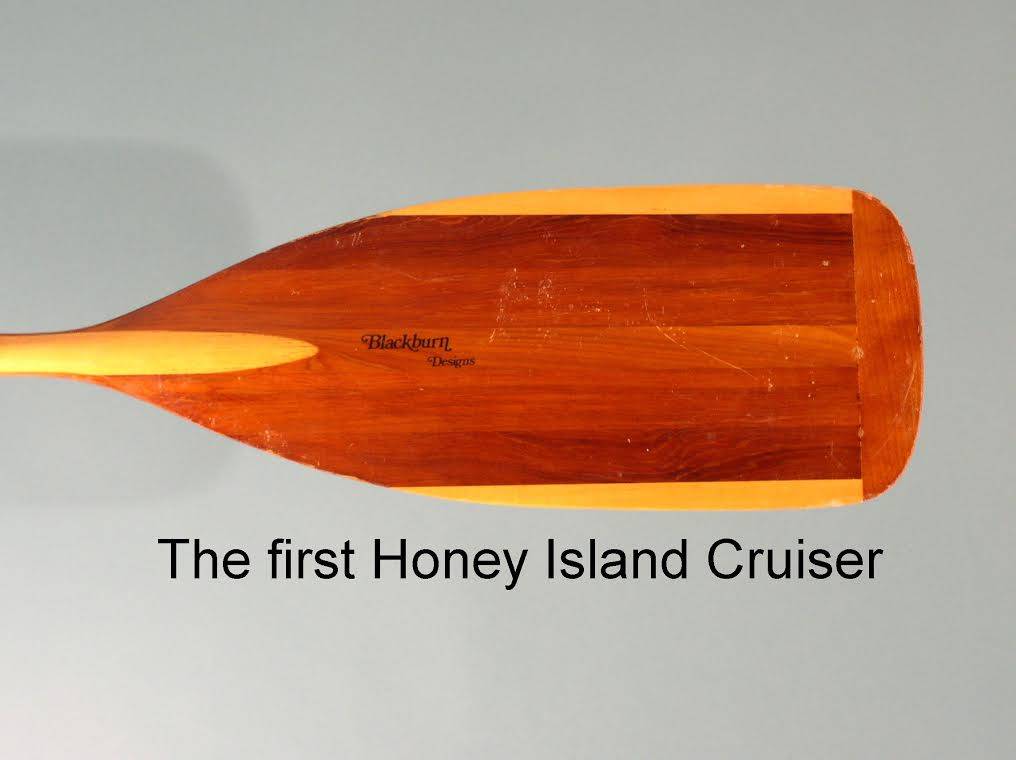 Galt further told me that he came up with the idea of bending the shaft of the straight Honey Island Cruiser by 2.5 degrees and also curving the blade – thus producing the famous S blade. He also wanted hiqher quality woodwork than was done on the Honey Island. Galt also claimed that he coined the name “Lutra” for this paddle, which I think the Blackburns had originally called the “Pro S” to distinguish it from their lower quality and flat-faced (less “pro”) Sea-1 line of paddles. The S concept was soon extended to a 15 degree version and probably to other degree versions. Here is a picture, also via Mike Jones, of Mickey Landry’s 2.5 degree Lutra. 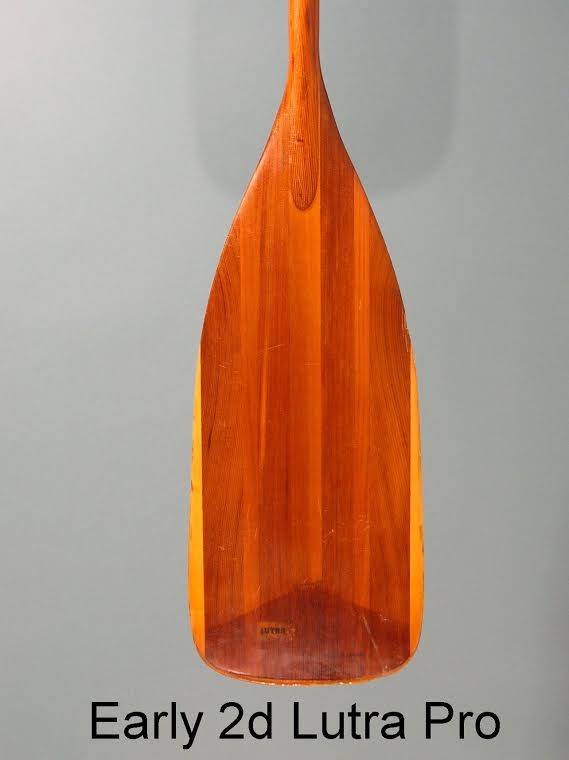 Galt was quite the canoe and self marketeer, but I take his claim to be the Lutra designer seriously. For one reason, Eric Schooley of Ibis Paddles and later David Mitchell of Mitchell Paddles acquired permission from Galt to manufacture their own versions of the Lutra. Secondly, the early Mitchell versions were also signed by Galt.

I bought my 2.5 degree Lutra S blade in 1984 from Bardy Jones, whom Mike Galt called the “greatest Everglades guide”. I had hired Bardy to take me down the Everglades’ Turner River into Chokoloskee Bay, switching between two Galt designed canoes, the Lotus Dandy and Lotus BJX (Bardy Jones Express). I didn’t buy a canoe from Bardy that day, but I did pay $150 for the Lutra in a nylon sock, which was an astronomical price for a paddle at the time. I then drove to Tampa and bought a Black BJX blem directly from Galt, who signed the hull. Here (courtesy of Hemlock Canoe) is a picture of Bardy Jones sitting in a Blackhawk Proem, contemplating the aesthetic elegance of a Lutra, at the BWCA Solo Rendezvous in 1982. 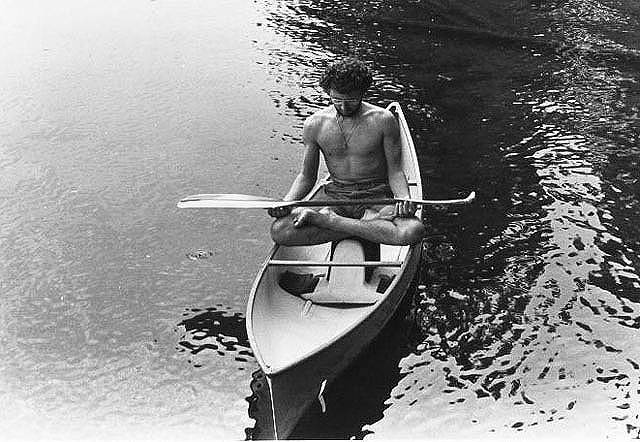 In 2009 I bought a new old-stock 15 degree bend Lutra from Mitchell for about $125. There are still three available on the Mitchell Paddle website today at prices I’m sure can be negotiated down. The Mitchell version does not have the aggressive Galt cobra grip of the Blackburn Lutra, but rather a sort of wide bent shaft palm grip. The Mitchell lamination schedule is also quite different and stronger with a stronger edging. Here is a picture of my Blackburn Lutra, Mitchell Lutra, and a Mitchell whitewater paddle for blade size comparison purposes. 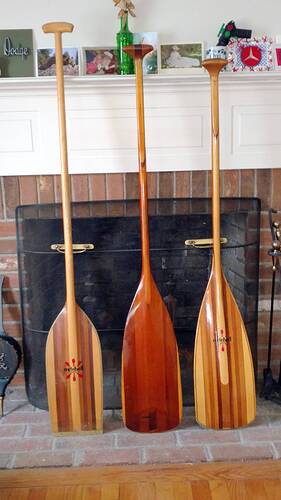 The Lutra blades are 8.75" at the widest point and 23.5"-24" long at the point where the sloping shoulders disappear into the shaft. They are big blades with curved power faces, meant to be used in a slow touring cadence. Galt believed that it was more relaxing and sensual to move more water at leisurely pace than less water at a high stroke rate. The Lutra will have a different feel in the water than other paddles, although it may or may not become one’s favorite feel. It is very powerful while being unfluttered and smooth, both on forward strokes and water-grabbing turning strokes. However, if one becomes addicted to palm rolling strokes, it will not be as amenable to that as symmetrical blades with symmetrical grips – although palms rolls can be done.

For 20+ years the Lutra S blade was my “straight” paddle of choice, It no longer is – I’ve gone darkly to ZRE carbon straight and bent shaft paddles – but it is still the one paddle I’d put over my mantle.

Owning a Lutra blade, one may some day in the future have the joy of explaining to an open canoe enthusiast – on the shore of of a river, lake or over the internet – stories about the origins of solo sport canoeing, freestyle technique, Mike Galt, Pat Moore, Mickey Landry, Bardy Jones, Dave Curtis, and big blade, slow tempo paddling. Transmitting wonderful traditions is part of the pleasure of open canoeing and of owning quality hulls and paddles.

Fun post. I never tuned in to the Lutra vibe or the huge paddle blade concept although I do remember paddling with Tom MacKenzie and having trouble keeping up even though he seemed to be paddling at a very slow cadence (with a huge-bladed paddle). I’ve interacted with Pat Moore and Dave Curtis (but none of the others you mention) and I really admire the strong-minded sport canoeing pioneers.

Thanks, Tom. This essay is intended to be the only written history of the Lutra that I’m aware of.

Glenn you need to do a paddle history presentation somewhere perhaps the Solo Canoe Event?

I have 2 Lutras; one is a straight shaft and the other a Pro S
Both are pictured. 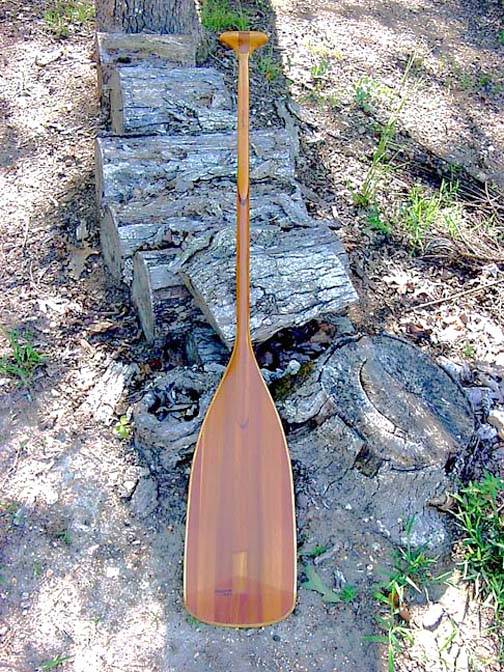 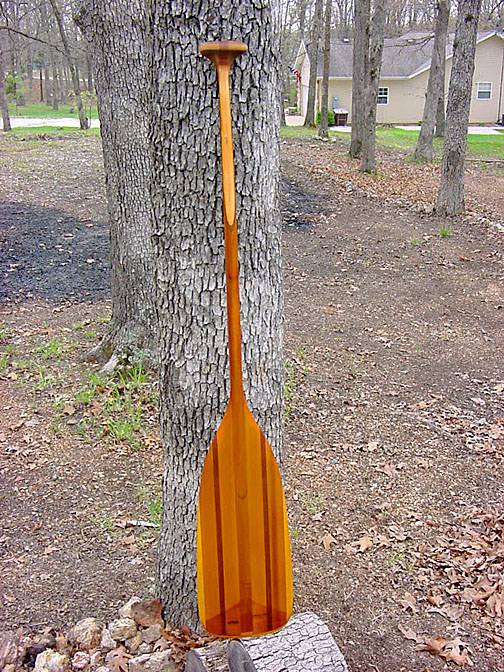 I’ll never willingly turn either loose.
I like having them much better than the money I might get for them.

Glad to see this come up again. Ive still never seen a photo that shows the s bend shape to satisfaction. These head on shots don’t illustrate the feature. The black and white photo above is close but…

Please, for those of you with a ultra blade, take a few photos in profile and oblique views to illustrate.

And if anyone is interested to let a lutra go, with either a straight shaft or very small bend angle, please send me a PM. I’d happily pay and get the paddle back into regular use.

Mine is a 5 degree bend. I had zre make the same bend…I pretty much always paddle with Zavs now