Greeting from Truckee CA,
I’m new here and was hoping to get some help with a Mad River Explorer “Special Edition” I recently rescued from the NV desert. I was so thrilled to find this beauty and want to give it a second life.
The serial number is VADEX788k889-K. I have a few questions if ya’ll don’t mind helping out

First, based on my research, this canoe was made in 1990 and is Kevlar, correct? Any other relevant information I should know from the serial number?
Second, any suggestions to remove the chalky white sheen from the hull and protect it for years to come? I want to make sure I don’t damage it. Does anyone know if this rig is Kevlar over Gelcoat and if so, what direction do I take?

Finally, I’m going to clean up the wooden gunwales with a wash and light sanding, can anyone recommend a good product to bring out the grain and protect? The wood has no damage, is dried out, and has been totally neglected.
Thanks for any advice! 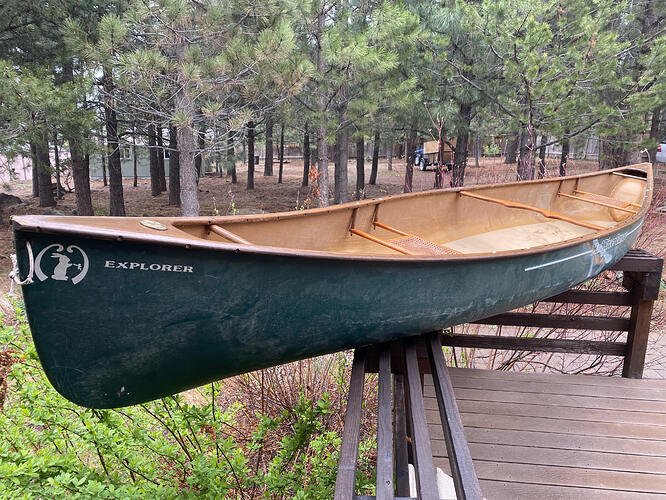 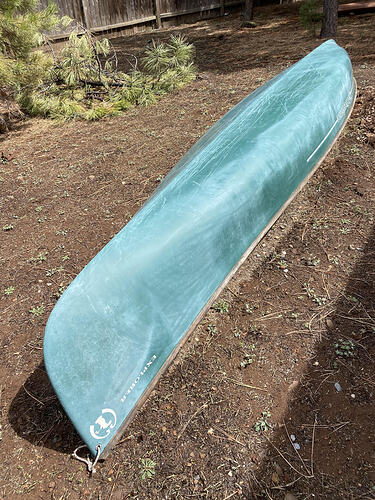 The outer layer is gel coat. It has oxidized. Buffing it out with automobile rubbing compound worked for me on a canoe I got that had been stored outside for years.

Kevlar is susceptible to UV degradation and hopefully the hull was stored upside down which does protect it.

I am of the varnish gunwale crowd and use several coats of Epifanes a marine varnish. Expensive but it lasts. The first coat is thinned out a lot the second not so much. Sand between coats with increasingly fine paper. Third fourth and fifth coats full strength.

There are oil the gunwales fans too but I have had trouble with mildew on oiled gunwales. If you are in a dry climate you might not have this problem. Oil really needs a hard rubbing in otherwise it does not get in deep.

The HIN is unusual but Mad River changed their system over the years. The V is not that it should be an M…
You are correct about the number. K indicates the hull is kevlar The date doesn’t quite make sense but may be 89 or 90

I am trying to identify that my canoe is in fact the Kevlar Malecite model I think it is - Serial number is mad612601075. I’ve heard the first 6 means Malecite and 75 is the year - can anyone fill in the rest? Thanks

Thanks Kayamedic, I really appreciate the info. Fortunately, per the previous owner, the canoe was stored upside down and the Kevlar seems to be fine. That is not, too brittle. Did you have good luck with a particular automotive rubbing compound? Thanks again.

It was Meguiars but I don’t remember which one! Others might have different thoughts

I had a similar project last winter! Mine was an '85 kevlar Explorer that had spent almost it’s entire life stored outside. Yours appears to be in pretty good shape overall. Mine was a little rougher, with a hole punched through one side that had been repaired very poorly, and the gunwales were bad enough that I ended up taking them off to work on them. The oxidation was incredible. I wet sanded the entire hull, starting with 320 grit, then moving through 500, 1000, 1500 and 2000. It was only then that I went to a buffing compound. I tried it initially but it didn’t even make a dent in the oxidation. I used 3M Finesse It II (39003), which is a machine polish often used in automotive finishing. It gives a great finish, but the real work is done with the wet sanding.

I wish I had taken better before and after pictures, but you’ll get the idea. The one that shows some of the oxidation removed I think was at the 1000 grit stage. It was pretty bad! 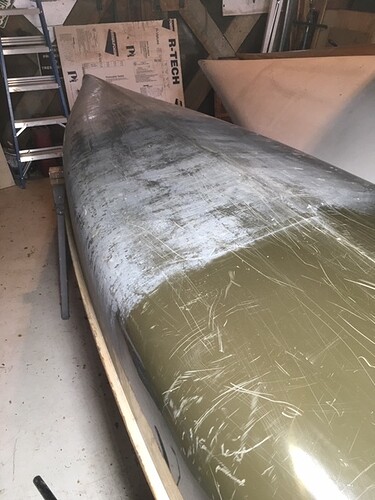 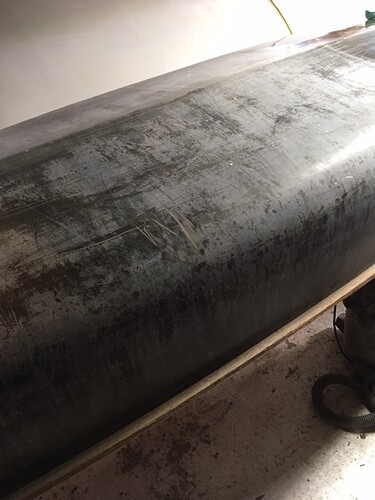 MR Explorer is a good boat, especially in kevlar. You can clean it up a lot with the methods above. I like Watco or tung oil on old wood. I live in the NV desert.

For the interior of a neglected boat I’d typically give everything a good scrubbing with a stiff brush and some non-abrasive cleanser like Bon Ami and then a good wash with soapy water (I like Dawn). On wood trim I’d typically use 100 then 150 then 220. I don’t think you need finer than 220. Then I’d finish with a Watco product like Watco Teak Oil (made for penetrating hardwoods) or green label Watco. Watco is a tough outdoor oil finish and I think it may have a little varnish in it. I much prefer the beauty and feel of an oil finish and would only use pure varnish on a boat stored outside that needs max protection. With Watco 2 or 3 light coats that are allowed to dry thoroughly make a very tough finish. Once the interior is clean I’d treat it with 303 protectant to give it UV protection (warning it will be slippery for a while). You should oil the cane on those seats immediately or the cane may tear the first time you sit on it. Recaning is not difficult if/when the cane fails. It’s also good to snug up all the screws and fasteners on the boat. It looks like a fine boat.

Thanks TomL , great advise.
I wish I would have opened up this discussion last week before i broke both cane seats…should have oiled them before the first paddle. Oh well, lesson learned and new cane is on the way. Anyway, thanks again!

The “K889” at the end of the 12 character HIN indicates that the boat was certified (built) in November of 1988 for sale in the 1989 model year. The first three characters are the manufacturer’s identification code which should be “MAD” not “VAD” as Kim said. The “EX” is a model code number that MRC used for Explorer models. The “788” is the actual serial number. The “-K” at the end is not actually part of the HIN but was appended to the end of the HIN by MRC on their Kevlar models.

I would give the hull a good washing with hot water and Dawn dishwashing detergent and see what it looks like. If there is still a lot of oxidation then I would wet sand it following ptickner’s advice. I have also had very good results using 3M Finesse It II and a low speed automotive buffer. Apply the glaze to small areas at a time and don’t let it dry on for very long before buffing.

The oil versus bright finish debate has gone on for a long time and it is largely a matter of individual preference. I have used both. I can tell you that “penetrating oil” really doesn’t penetrate ash more than about a molecule deep. It is basically a surface finish as is a bright finish consisting of varnish or polyurethane.

A bright finish lasts a lot longer and does not mildew but looks like crap if it gets too scratched up. If your usage makes it likely that the wood trim will be subject to scratches, oil may be preferable. Oil is much easier to apply, but requires you to keep after it. How often you need to reoil will depend on your use, climate, and storage, but anticipate having to reapply it a couple times a year. Everybody thinks that will be no problem, but many fail to do so.

My preferred bright finish has become two or three thin coats of a very non-viscous penetrating epoxy like System Three Clear Coat followed by about three coats of varnish like Epiphanes or Petitt Z-Spar Captain’s varnish with wet sanding with 1500 grit paper in between coats. A complete finish job like that will take a lot longer than applying a few coats of oil, but will last a lot longer.

Whatever finishing method you use, take out the seat frames, seat hangers, yoke, and carry handles and make sure you finish the cut ends. These cut surfaces often get ignored at the factory and the end grain of ash loves to soak up water leading to rot. You can apply oil or varnish in the screw holes in the wood using a pipe cleaner. If you get very ambitious, you can remove the gunwales and treat the inside hidden faces of the outwales and inwales with penetrating epoxy. But if you want to treat the outside faces with oil, don’t get any epoxy on those surfaces or you will have to sand it off before you oil.

That should be a very nice canoe. I have a Kevlar Explorer that dates back to around 1983 when MRC still used non-radiused outwales on their wood trimmed boats.

I use this stuff on the boats. Walmart has a similar product for less$$$. I found this and my buffer with a tee shirt takes care of the oxidation with minor abrasion.