Has anyone heard of or have any info on a Mainstream River Cruiser canoe? I can’t find anything online at all. This is a nice boat I am trying to buy from a buddy but with no info it’s tough to bring a fair offer to the table. Thanks!

I think Mainstream was made for big box stores, but it may not be one of those. Got a photo? What is the material? How much does it weigh?

I believe it’s royalex but I’m not super familiar with that stuff, weighs 50 something lbs probably. I’ll work on the pic.

This is the only pic I have right now. 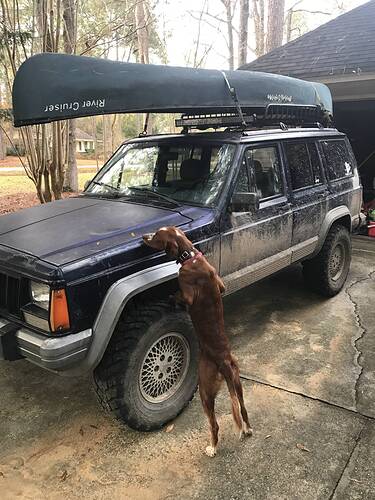 50 lb is light for Royalex for what looks to be that size canoe. I am curious about these marks: 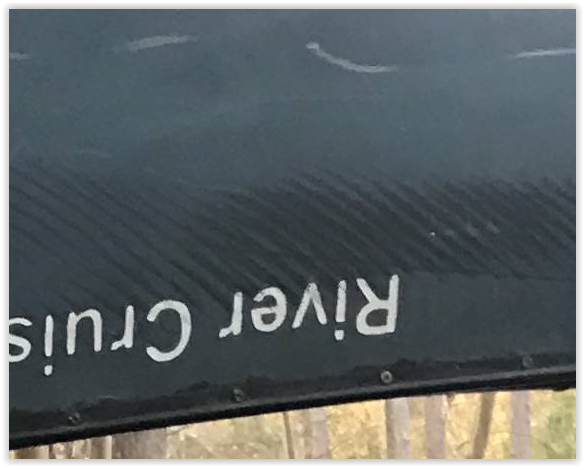 I also wonder about what looks a bit like tape hanging out under the gunwales.

What tape are you talking about? The marks are probably from the rare Georgia river monsters… I would have a better guess of lawn mower tire marks though from where it was next to his house. It could be heavier, I may not know my own strength, or the back pain could overpower the feeling of the weight. It is significantly lighter, 20 #'s or so, than my Eagle Talon Kayak. Is fiberglass heavier than royalex or lighter?

I like your sense of humour. Dry and witty.

FG can be lighter or heavier than RX… that does not look like RX… Can you take a picture of the inside of the boat?Also look at the stern for a number… Likely made for big box store by someone else but the letter number combo ought to help ID it.

What kind of dog is that?

One big enough to catch a Jeep & drag it home. (A hound dog of some sort).

Pics aren’t the best but you can see fairly well. I believe it’s some made of some sort of plastic. Hull ID is in pic as well, I assume that was needed in identification?

MainStream Kayak now part of Confluence Water Sports is a company listed in this site (Paddling.com) , looks like their products are mass market big box types, maybe they made canoes in years past.

The first three letters indicate (DAQ) indicate Watermark Sports made the canoe… This article may be of interest https://groups.google.com/forum/#!topic/rec.boats.paddle/9_fjDafiIMo Dagger and Perception merged and since then there has been more introduced into the pool=Confluence.

Most likely a run for a big box store. Your boat was made in 2001

The photos of the interior of the canoe suggest the hull is Royalex or possibly R-light, although I’m not sure that R-light canoes with the Dagger badge were still being molded in 2001. I suspect if you weigh it you will find that it weighs considerably more than 50 lbs. Probably more in the 60-70 lb range.

DAQ was originally the MIC (manufacturer’s identification code) for Dagger Canoe Company. Dagger Canoe was acquired by Watermark Inc. in 1998 which had also acquired Perception Kayak that same year. In 2001 most of Dagger Canoe’s operation was transferred from Tennessee to Easley, South Carolina where Perception was based. By this time, Watermark Inc. had also acquired Mainstream Kayak, Harmony Gear accessories, and Adventure Technology Paddle. In October 2003 Dagger stopped making and selling canoes.

Dagger and Bell canoe both molded hulls that were sold to big box stores such as Galyans Trading Company, which then sometimes fitted them out with gunwales, deck plates, thwarts, yokes and seats. Your canoe hull was undoubtedly molded by Dagger (Watermark) in 2001. The hull shape suggests to me that it might be a Dagger Suwannee. If you get an accurate measurement of overall length stem tip to stem tip, and maximum beam at the molded hull, we can probably tell you which Dagger hull model you have.

Thanks for the education there. That’s why I love these groups. I’ll measure it out when I get back to town and post it up so we can do some more figuring out.