Looking at the Aqua-Bound Sting Ray carbon… the blades are black. Would ideally like something with high viz / bright colours on the blades as half my paddle time is in a lake with plenty of cottages and boaters.
Without effecting the paddles ability to enter the water smoothly and not effect the dihedral, how can I add a yellow stripe or something to it?
Outdoor vinyl… or?

SOLAS reflective strip or patch. Can get it online or from many marine stores. No it does not affect the paddle’s performance. And even if someone can prove it does, it still beats the heck out of getting run over by a motor boat.

Second SOLAS tape. Not cheap, but much more reflective than just about anything else out there.

In dark, reflective tape is best. But was that what the OP asked about?

In daylight, the reflectiveness is worth nothing (unless the oncoming boat happens to have the sun exactly at the rear). You need visible colours instead. 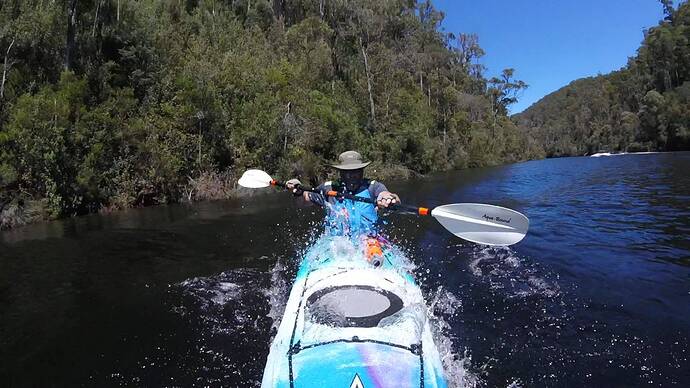 I (and others) disagree that reflective material is worth nothing in daylight. I have seen the flash from other paddler’s reflective strips during the day from hundreds of feet away. The paddle is moving so at some point it will catch the right angle. For reference, the Great Hudson River Paddle specifies reflective tape on PFD’s and paddles, I think boats too, from participants. They only travel during the day and are on a heavily trafficked river with pleasure boats and commercial traffic.

I have seen few lake boaters with the alertness to always see a kayak, let alone strips of color small enough to fit on a paddle blade. A bright boat, hat or PFD does better if it is a non-reflective. They are bigger.

Bright mirrored reflectors work even better than a wetted paddle in daylight. Operation Boat Safe (I seem to recall) had some promotional ovals but I found the same sort by Suspenz. If you have a careful hand you could try some metallic furnace tape and hit it with a buffing wheel once applied to the blade. I’d be more inclined to just get the ready made.

For paddles with black (carbon fiber) blades, I paint the blades fluorescent orange (over a white base coat or white stick-on vinyl). I then add sections of prismatic reflective tape on the blades for daytime visibility and wrap strips of SOLAS tape around the shaft at the base of the blades for nighttime visibility.

Used SOLAS tape on my Cyprus blades for one summer. My experience was that It’s not very effective during daylight hours, but very reflective at night when a light shines on it, I think it’s the same principal as the reflective piping on drysuits, which is easily seen at night under lighting but not noticeable during the day.

Since I paddle during daylight hours, I removed the SOLAS last winter and replaced it with a mirrored reflector on the back face of one paddle (had two stickers but only one would stick). A chevron of Duck prisim tape is on each power face. That reflector oval is very noticeable as a few times I saw power boats change course once they saw me. Reflectivity also confirmed by other paddlers. Only once did I have to wave my paddle and that was at a couple of lake lice drivers doing donuts too close to me.

Thanks for the link, Marshall. Had been looking in craft stores for an adhesive sheet of mirrored reflector to add to the other blade.

FWIW, I’ll notice white blades flashing in the distance from a mile away - long before I’ll see the paddler or kayak. 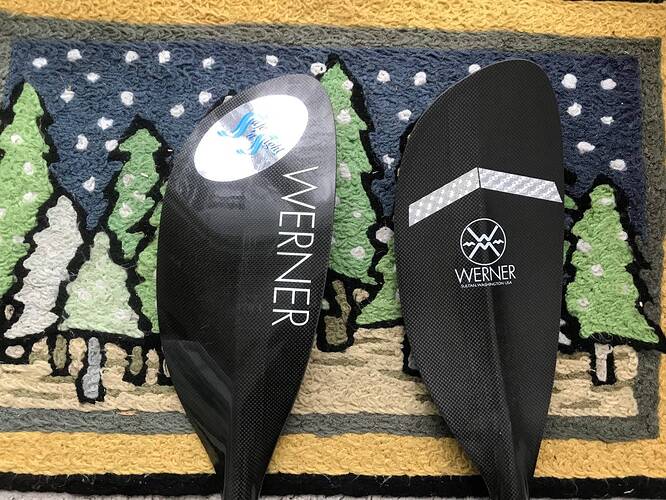 Maybe too late now but I would think an orange boat, PFD, and/or hat would help visibility.

I painted my black blades with white epoxy spray paint. Took a few days to cure but is still there after a few years.

@Celia said:
I (and others) disagree that reflective material is worth nothing in daylight. I have seen the flash from other paddler’s reflective strips during the day from hundreds of feet away. The paddle is moving so at some point it will catch the right angle

So I repeat what I wrote in my last post: In daylight you will only see the reflection if you are lucky to have the sun behind you. Because in that situation, the retroreflective tape will send send the reflection in your direction.

This is the reason that you can see retroreflective tape at such a long distance, if you have a lamp with you. Only a very small amount of light from your lamp will hit the retroreflective surface far away. But almost all that light will be returned in your direction, instead of being wasted in other directions.

Edit: The proper English word describing the properties of SOLAS tape is “retroreflective”. I have updated the text to reflect this.

@Marshall said:
If you have a careful hand you could try some metallic furnace tape

Such tape works like a mirror. Not like SOLAS tape. The way these two surfaces work are fundamentally different.

Reflective tape or mirrors are great if someone is actively searching for you, but I don’t see that they would be very effective in preventing one from getting run over during routine navigation - in day OR night… At night, a boater would need to be shining a bright light in their direction of travel which is not normal, right? Why leave that to chance? Much better IMO to generate your own light (e.g., with a light lashed to your PFD which keeps it elevated and with you even if you end up out of your boat for some reason. I assume btw that the aforementioned paddle reflectors that reflect sunlight don’t work on cloudy days. I agree that bright clothing is helpful and that motion (e.g., of a paddle going up and down) is something that very effectively draws the attention of our brains. I believe that the up and down of a distant paddle is almost always the first thing I see when coming across another kayaker.

I wonder how many people in this thread regularly paddle in areas like inland waterways or lakes with a lot of tourist motor boat traffic vs open water like ocean bays with a lot of working boats. There seem to be a lot of complaints about reflective tape that have not been so in my experience inland. (Or apparently the Great Hudson River Paddle folks.) And a lot of emphasis on the specifics of tape or reflective material vs the bigger visibility items, like a moving paddle and bright colored boat/clothing.

99 % of my paddling is inland lakes and rivers. I paddle SC coastal islands a couple of times a year, on the bay side.

I don’t think anyone is complaining about SOLAS, just discussing its best use. I live on an inland lake with plenty of wave boats, jet skis, and power boats. I removed my SOLAS because the very reflective mirror-type patch and prism tape on my paddle are more easily seen in daylight. I figure if the little mirror in my PFD does the trick for the required USCG signaling device, the mirroring tape acts as a signal on my paddle. I do like bnystrom’s mention of placing SOLAS strips around the paddle shaft in case I’m late getting off the water.

While my Prana sure isn’t brightly colored, my hat, PFD, and rashguards are. But power boats plane when they’re moving fast and unless the driver has a lookout or is standing, their line of vision isn’t all that great for paddlers since we’re so low on the water. The more paddle flash, the better. When I use my Greenland, sometimes I do have to wave it since it’s just unadorned red cedar.

Here’s what 3MScotchlite has to say about their retroflective materials:

Use some of both and you’re covered for day and night.

I put blaze lime green tape all over my paddle and boat and have been told by the harbor patrol I’m easy to see. The AliExpress stuff is 1/8 the cost of 3M tape and works 90+% as well. I picked up like 80ft for $20.

I covered the front face on both blades with the reflective tape plus have over 40’ on the bow, middle, and stern of my boat.

In addition, i wear a blaze green long sleve shirt and have reflectors on the back of my pfd.

My regular waters are the SoCal pacific ocean, so can report good results in large conditions (6’+ waves)

If you hit me, you’re blind or drunk!

Yup, that describes a good proportion of the recreational boaters I’ve met.