So it had been several years since I’d run from Cunard to Fayette Station. It is big whitewater fun. Big splashy waves and holes make it a great class IV rafting river. It is just a whole lot of fun. In the the 80s and early 90s I got over 450 runs on that stretch (mostly videoing for commercial rafting outfits). That was all in the past.

So yesterday I ran the gorge again after a four or five year hiatus. I had lost my ability to roll and had stopped running the big water. Conditions seemed right to try it again- river was down to 4 or 5 inches, strong crew heading out, and the roll at least seemed like a possibility.

I had dry hair but never really felt like I belonged out there. Stuff was bigger than I remembered and more turbulent. I doubt I could have rolled had I flipped. I was surprised at the changes in a couple of the rapids. Middle keeny has a new hole and lower keeny lost the rooster tail at the top. All in all a good day, but I think I’ll stick with my class II-III whitewater and rec boating. Overall I just don’t feel like I have the physicality that big water demands. 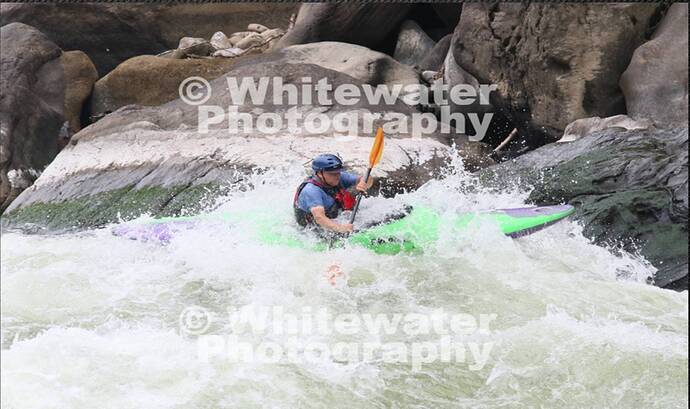 Can you restart my with less challenging water and decide if you want to work yourself back up?
I’m almost strictly flat water and used to do 20 milers. Now 5-10 are enough.

If you lost your ability to roll, what are you doing on that run?

We have all lost some ability with aging. You must be honest with yourself.
Don’t make a mistake like that again.

so I’m rolling in flatwater and in some current. That’s a lot different then rolling in rapids like middle or lower keeney. There is rollingin a pool or in the flats and then there is combat rolling. Sometimes you have to go back out there to remember that. If you stay where you are comfortable then odds are you aren’t rolling much or getting much practice. What I’m missing is combat roll practice.

I don’t know any folks who practice rolling in the middle of those rapids. Several people did take unintentional swims after missing a roll. One person said it was tiring- he’s less than half my age. Perhaps the next time I get a hankerin’ to boat below Cunard I’ll just take a raft down.

I’ve been pretty committed to working on the roll. Last year I practiced 43 different times- at least 4 or 5 rolls each time, mostly in the river. There’s still a bridge I have to cross. I just haven’t crossed it yet. I avoided it and had dry hair. If you want to boat big water then you need big water physicality. I’m still workin’ on that and may never get it back. Today was a lot tamer- Summersville Lake.

I stopped running the harder stuff when I found I was not having any fun running the more difficult rivers and was relieved to be back on shore at the take outs. It is hard to admit we are ageing! Hard to admit ,it takes longer to heal!

I can understand your desire. It has been years since I’ve paddled anything bigger than Class 2 unless I’ve been in a raft. I miss it, and while being a paddler on a raft is fun, I want more control instead of just being power. I’ve signed up for a whitewater rowing class hoping that I can capture some of what I’ve been missing.

Sometimes you have to go back out there to remember that. If you stay where you are comfortable then odds are you aren’t rolling much or getting much practice. What I’m missing is combat roll practice.

I agree with you but I would not necessarily jump right back into “combat rolling” practice in a class III+. You can ratch it down a notch and practice rolling in class II rapids, flipping where rapids will run into a pool and/or just flat quick water. But, I am sure that you know this already.

Couple of weeks back, I just playing around the strong eddy lines at the tail end of class II rapids. Just messing around with my out-of-practice tail squirts, 360s and bow dives resulted in capsizes and “combat rolling practice.” Actually, my rolling was way better than my “play moves.”

yeah sing I think you nailed it in terms of where I need put in the work this year- rolling in the low consequence squirrelly class II stuff. The past couple of years I have just focused on getting flexibility back to be able to roll in any kind of water. I was also transitioning back from c1 to kayak and had been used to finishing with my head on the front deck. I had to unlearn some things. Most of the time paddling a kayak like a c1 works out okay but it really messed with my roll. I’m constantly telling myself to look over my shoulder when I’m finishing my sweep roll.

Have you tried practicing rolls in current, capsizing to your upstream side so that the current gives you some assist on your downstream paddle blade as you roll up?

Hey P, I tried some of that last year- the Mulberry was good for that and the upper New back in wv. I need to step up to the swirlies and wave trains. This year I kind of got in rec boater mode through the spring and didn’t get roll practice in. In fact, I was pleasantly surprised with how strong my roll was in flatwater after months of not practicing. (No pool time this winter, Hawaii trip). My second roll practice session on the tail end of an upper New trip wasn’t as good as the first. I know the logic is crazy but I wanted to get out there before my roll deteriorated even more. I still have to think about the mechanics though. I would like to work past that point, and get more reflexive. Then I will think getting out in the deeper runouts and flipping would be more appealing.

Before I got the hips replaced I had gotten to the point where I couldn’t roll at all. I found regular stretching helped along with a lot of practice as I try to work myself back into form. I’m doing a sweep roll and making progress overall but it has been a slow process. I can remember my first pool session a few years ago after hip surgery, just practicing hip snaps on the side of the pool and getting into a good protected set up position. It took 4 or 5 trips to the pool before I could even do one roll. Then my goal was 5 rolls. Then I took rolling to the eddys in the river. Then I tried mild current- swam a few times- blew a T rescue on South branch of the Potomac and swam, on James river at Buckhannon I swam practicing by myself. Mostly though I was having success. Never really made the next leap.

Sometimes you just get frustrated with the process and want to run a bunch of stuff. Before the hip replacements I had been boating the new river gorge, lower gauley, and upper meadow without a roll for a few seasons. It got so it wasn’t that much fun. Just too much pressure to run clean lines. I was getting away with it but didn’t feel good about it.

Some years go by and after a while you begin to feel like if you don’t get back out there at some point that you never will. That’s what pushed me back on bigger water. Still I’m not really ready from a survive-ability (rolling/swimming) stand point. For the next month or so I plan to boat in WV (upper new mostly).

So what this post is mostly about is talkin’ myself into getting after it ( regular practice) again. Right now I don’t really have a group I’m practicing with. I had a bud who would wade out and help me put into muscle memory a full rotation on the sweep roll. Unfortunately he was relocated. In terms of improving fundamentals that seems to be key- having someone to help troubleshoot.

The 12r rolls easier than the diesel. A machno rolls even better but it splays my hips out and thus is less comfortable. My ability to boat far exceeds my ability to roll. Thus I’m not getting much upside down time in the course of river running or even surfing. In the last few years I flipped one time (Bullpasture Gorge) and got lucky and rolled up.

In terms of professional help I’ve practiced with Scott, owner of the Noli center a couple of years ago.

Maybe buy or borrow an old school whitewater kayak with a rounded hull (no sharp chine) that has your knees closer together and less splayed out. Something like a Perception Pirouette.

I got a mirage under the back porch, that’s a good suggestion. Some practice rolling it in easy stuff may lessen the learning curve and make it more attractive to try in the wave trains. I have no desire though to take it down the gorge. The boat is getting a bit brittle (small crack in the cockpit combing) and I want the safety of a big cockpit and better walls…and while pencils may roll great and do big enders they also tip easily. Then there’s the whole outfitting thing- hard seat, added on backband. Maybe there’s a reason it only comes out from under the back porch every few years.

Another strategy : is to take /make more challenging lines on easier class of rapids, also , try running a rapid just using backstrokes/back ferries. These are a couple of ways to challenge you while reducing risk while increasing your entertainment.

I don’t know your age, but I do know mine. And even considering myself to still have reasonably great physicality, albeit with an occasional shoulder problem, I said “arrivederci” to rolling in Class 4 at “early retirement age”(55)a few years back. (Not that I ever truly had a bombproof off-side roll to begin with, but I could usually manage four-outta-five snaps on my right.)

Now, I’m even wary in average(if there is such a thing)Class III. And often times opt for my float bag laden canoe.

Dude, I’d take the boat from my fleet designed by Attila himself in WV, just for such action: 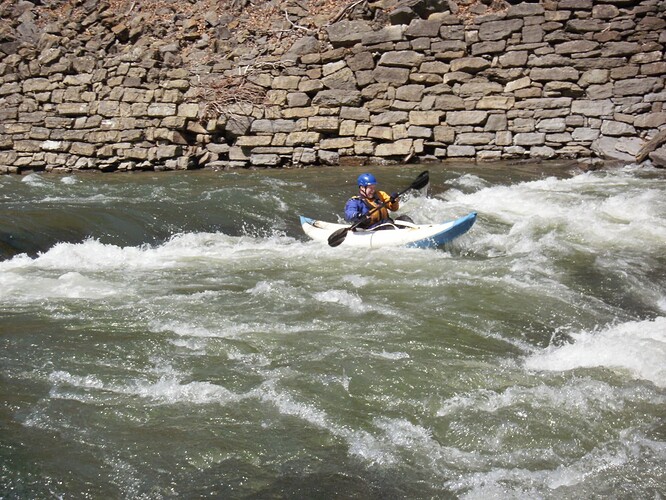 custom inflatables’ thrill seeker is a nice ride for sure