Had a nice upstream & back paddle on the Grand River above Onondaga today. The river is high (nearest gauge is ~2000 cfs while the mean is ~600) but that made it easier. This is mostly a low land area and at lower folw could be a portage fest. Today though we could paddle through the trees and around and/over obstructions. The current is mostly mild & we averaged a little less than 2 mph going up. Coming back we weren’t in any hurry - paddled enough for control. A perfect day for it & the bugs aren’t out yet.

Didn’t know that the park at the put in had water trails: 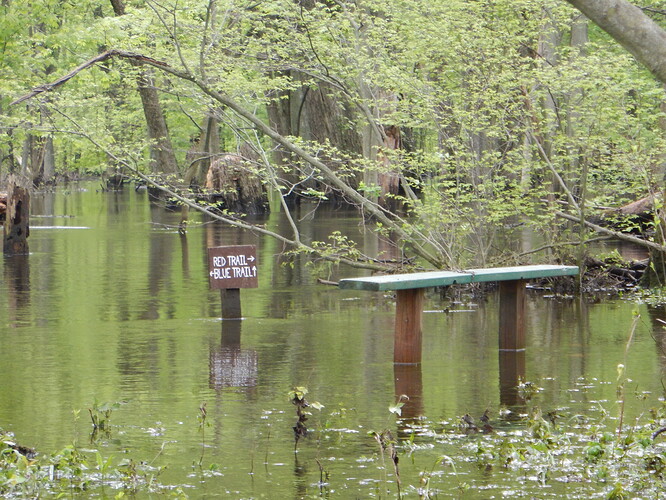 Had to take a break after 2 hours going up stream: 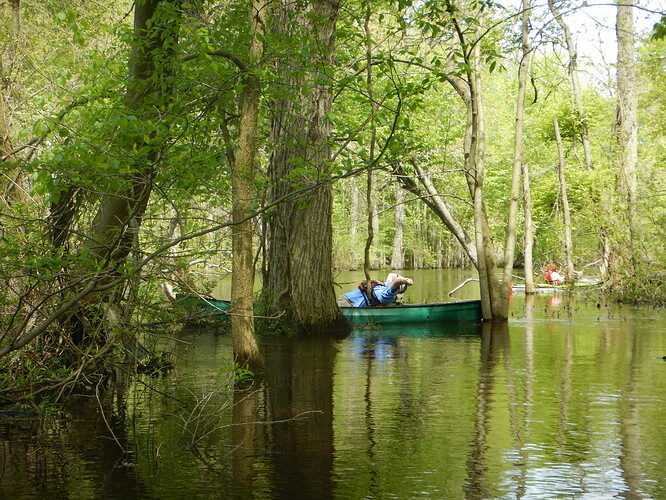 If you have paddled Southern Michigan rivers you have probably portaged through poison ivy but have you paddled through it? 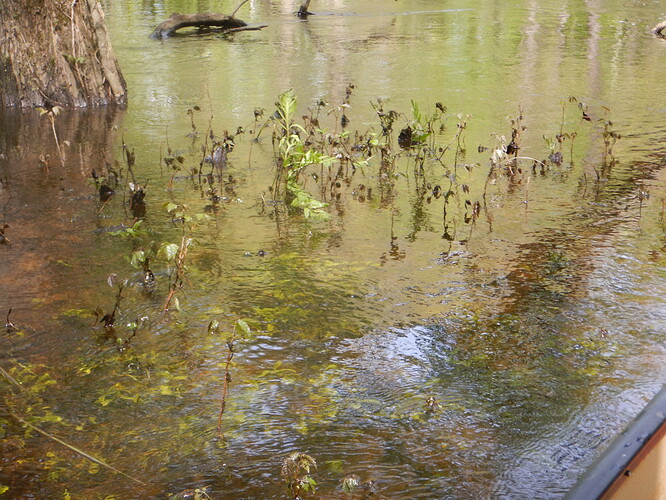 It was a nice day. this probably could be in Pretty Pictures: 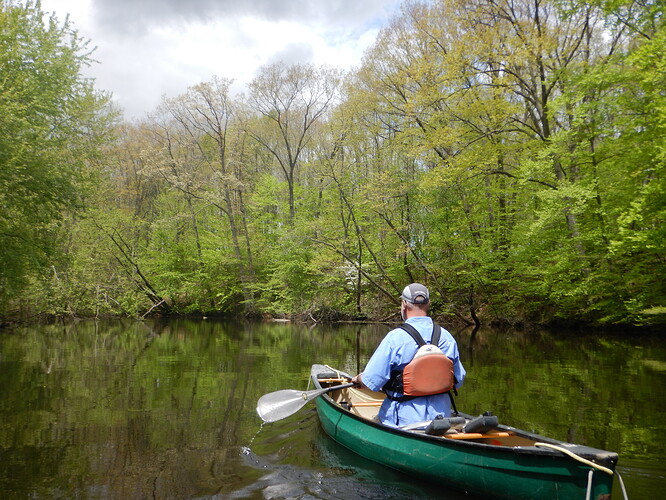 Looks good to me! We got more rain last night and more is expected this coming week. Maybe the rivers are just backing up because the Great Lakes are so full.

I can never quite get my wife to understand this, that things are sometimes indeed easier when higher.

Nice pics and report, thanks.

Those are some nice pics. Looks like it was a good day

There are actually a lot of different kinds of paddling. It is a good thing to try them all. 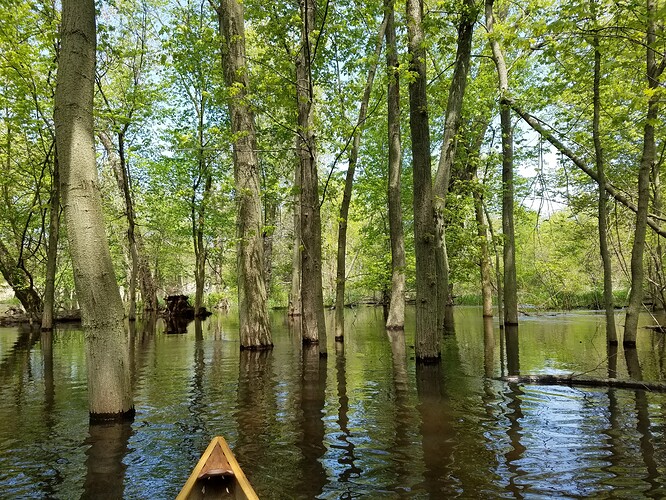 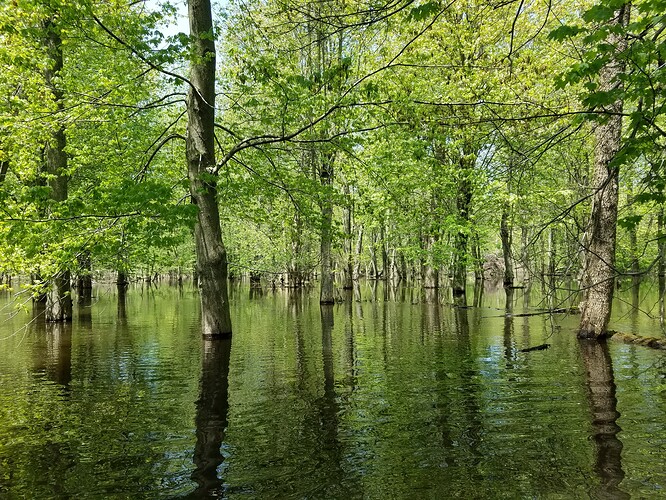 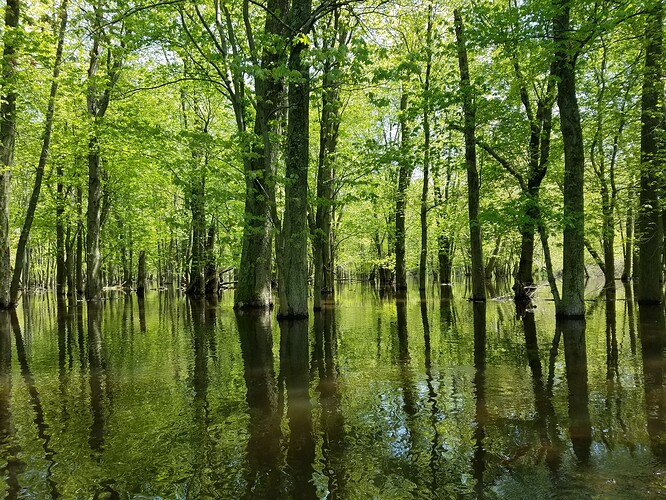 My only “jungle” trip was Friday, when I was putting my phone away and moved into that tree. 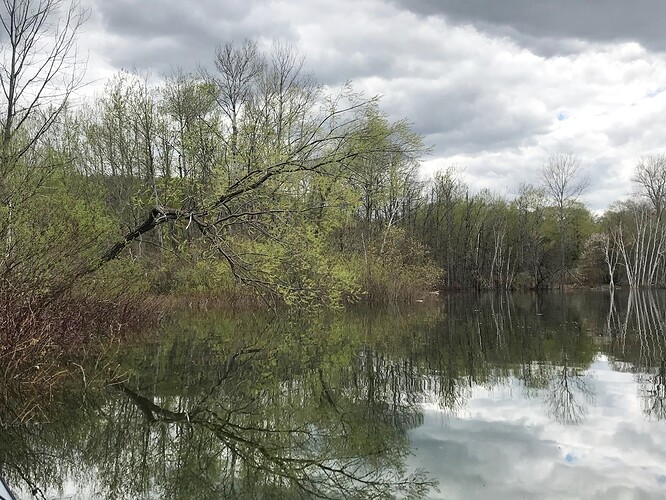 Floodplain paddling can be a blast.

This evening I happened to pick up a book I hadn’t opened in too long a time. In it I stumbled upon a quote that made me think of this post and the context of our shared recent situation. BTW, If you’re looking for something to read try this. I don’t think any of us would regret owning a copy: https://www.amazon.com/River-Life-Natural-Cultural-Northern/dp/0965676331

“I know of no solitude so secure as one guarded by a spring flood, nor do the geese, who have seen more kinds and degrees of aloneness than I have.” - Aldo Leopold

It reminded me of occasions when I’ve done a bit of “jungle paddling” myself. It’s always an adventure of a different sort. I can remember one trip where we took a path straightening out a bend in the river by going through the forest. (With poison ivy climbing some of the trees - maybe the caked mud from previous even higher water was some protection, though.) Afterward I looked at the map and, tracing where we had gone, discovered that at one point we had been paddling a mile and a half from the river. We ended that trip by paddling over the landing parking lot and landed by the “no parking” sign on the road in.

Thanks for reminding me of those good times. May they come again soon!

Fllodplain paddling can be lots of fun. It can also put you in peril depending on the gradient. Rivers in flood can get really pushy. They will tend to push you into the trees on the outside of bends. There can be a lot of downed trees and woody debris in the water. Strainers kill people.

I remember paddling the Carson River one spring. We got pushed into some innocent looking willow saplings on the outside of a bend. The current held my paddle against the boat, and I had to lay back to go under some of them. We quickly capsized. We made all the hard rapids, it was the innocuous willows that caused a swim.

The Grand in this area doesn’t have much gradient. We were averaging close to 2 mph going upstream (and we are NOT racers or Verlen Kruger). One of the advantages of no-shuttle, upstream & back trips is that you can see most obstructions as you are going upstream.

Wood is always a concern in Michigan rivers. Boat under control with situational awareness.

Agree with ppine about the hazards of doing higher gradient streams and willows in high water. We got into some of that once on the St. Francis once in Mo, if I’m recalling correctly. One of us swam on that outing, though it was of no real consequence.

There is another peril I once encountered and which I haven’t heard mentioned often and a humorous story of a trip that was involved with it.

An old regular paddling bud of mine and I traditionally used to talk in mid winter and plan our first spring paddling trip months in advance. On one such call we came to the conclusion that we couldn’t remember to the half decade when some of our trips were - we could remember coming on an island covered with butterflies but not when or where that happened, for example. Everything just faded into one big happy memory of river trips but without much specificity or order to them. So we vowed to do something unique on each of our trips to sort of bookmark it in our memories.

So that year we decided to do the Black River in central Wisconsin for our first trip. As it happened there was a “fine dining” restaurant about two days paddle from a convenient put in, so we decided to do a really good meal at the conclusion of the trip in order to avoid our usual bar/grill ending. Built the trip around that idea. Well, when the date came around, the town where we planned to put in the river was flooding so badly that houses along the river had water up to their second story windows. Grounds for postponement. And we did.

About three weeks later the water was down and the weather good, so off we went. The river has a fairly wide sandy flood plain but high rolling hills on either bank and those hills, we learned, had their own higher water tables. Along the first days paddle there were seeps coming out of the hills and wide areas of sand along the river banks that were still under a couple inches of water. No biggie, though they made for excellent swimming holes in old flood channels and good mosquito hatching habitat as well. We found spots at every place we stopped where water was seeping up through the sand into these shallows. Quick sand, in other words. They’d be little spots, often if you stepped in them they’d be knee deep and easy to step back out of, but after finding a few of these there was a warning light that was flashing in the backs of our minds. We got a bit careful. The upside was there were places where there were wood piles two stories high with the wood practically sorted by size for our campfire. First night we camped by one of them, the second night we found a high island with a bit less abundant firewood but a larger “yard” to prepare for our fine dinner that afternoon when we finished.

The next morning we got up, broke down our tents and such and dug into the dry bags for our dress clothes - suit and tie required, you see. It was a unique situation for us. We shaved and everything. We then departed with visions of surf and turf, kabobs, baked potatoes dancing in our heads. Even after the coffee and instant oatmeal we were hungry.

After paddling maybe nine miles we rounded a bend and there atop a high hill with a steep undercut bank overlooking the river was our destination. It had a big picture window looking out on the river and we could see those happy diners seated at white table cloths watching our approach. Then it struck us; We were on stage. Duded up as we were and with an audience, synchronized solo canoe paddling was clearly called for. So I fell in about 18" behind and just to the left of my friend. I switched sides when he did, matched his course, paid attention to posture. When we hit the shore, much to my surprise, exkayaker that he was, he pulled in parallel to shore and blocked my line to beach. Being only 18" off his stern, it took some deft paddle work to slow and tuck in inches behind him and duplicating his landing. But I was on my game that day and pulled it off flawlessly. He grabbed his dress shoes and hopped out. I grabbed my dress shoes and – remember that bit about the quick sand? I didn’t. There was no more support there than if I’d stepped out in the middle of a lake. Next thing I knew my tie was flowing over the gunwale I was hanging on to.

Then we went to a bar and grill. I remember that trip well.

PJC,
Boats are supposed to be fun.
Many years ago I delivered a bride in a full wedding dress and a groom in a tux in my Avalon 16 raft on the Truckee River above Reno. The reception was at a pavillion right next to the river. It was a dramatic event and people loved the big entrance.

Boats are supposed to be fun.

And so they are,
.
“There is nothing - absolutely nothing - half so much worth doing as simply messing about in boats.”
Ratty from Wind in the Willows

Qruiser and I left our wedding reception in the kayaks…

While we didn’t leave the wedding in a canoe we did use the wedding money to buy a Sawyer Cruiser. We still have (although a bit worse for the wear) 30 years later.

First date with my future ex wife was in a canoe. We had many good years and always got along best on the water.

Second date with my current wife (of 30 years) was in a canoe - a Wenonah Jensen 18.

I met a great lady in 1998. We got along really well so after about 2 months I asked her if she wanted to go on a canoe trip. We did 151 miles on the Upper Missouri R in Montana and have been together ever since.