Sorry for the open ended title but they were too random to include.

Sorry for the long form questions. Thanks.

I can only address question #3.
There are mounting systems and GPS/electronics holders that you could use for your GPS. They would require mounting a base to your kayak which is quite easy on a poly boat. My personal favorite is Railblaza, and I have mounted the bases on both my poly Necky kayak, and my Thermoform Eddyline kayak. I use the Railblaza mounts for cameras, tie downs, safety flags. However, I don’t use a mount for my GPS. Handheld GPS tend to be kind of small, so I like to keep mine on a stretch tether, close at hand, so I can really get a good look at it and scroll through different stuff. If I mounted it on my SOT kayak, it would be too hard to see the small screen. Especially in bright sunlight. I use a Garmin Etrex 20X GPS and keep it in a GrizzMoVest protective case. On rivers, I use the map feature, and mileage feature the most, but I also like to keep track of my paddling pace as well. On lakes I use the map feature mostly.

#2: No. With high humidity and temp fluctuations you are going to get condensation in the boat. Paddling is a wet sport.

When the kayak is being stored, you could remove the hatch covers then place some fabric over the hatches, securing it with a large rubber band, shock cord, bungee, whatever. Landscaping cloth would work since its porous. That should keep bugs, etc. from moving in. If the hatches stink, wipe them out with a 10% bleach solution.

Here’s a post by a guy who painted his poly boat. Lot of work, it’s going to scratch off through use, and the finished result might look worse than what you started out with:
http://www.wildernesssystems.com/us/experience/faq/content/painting-and-adding-decals-kayak

Regarding not liking the kayak color – you are not going to see the hull much when it’s on the water so if you were going to go to the bother of painting it, I would mask around the gunwale line and just do the deck (a lot of kayaks, especially composite and thermoform, are split colors above and below). YOu can apply black vinyl tape over the transition.

Or just decorate the deck with weather resistant vinyl stickers. I’ve used a variety of the designs from Hippy Motors USA on both vehicles and kayaks (they last 5 to 10 years and can be easily removed with a hair dryer or heat gun on low). Some of their traditional Maori designs are cool on boats and they cut them to order in any color you want. http://hippymotorsusa.com

This example (not my boat, BTW) is a little over the top but you get the idea: 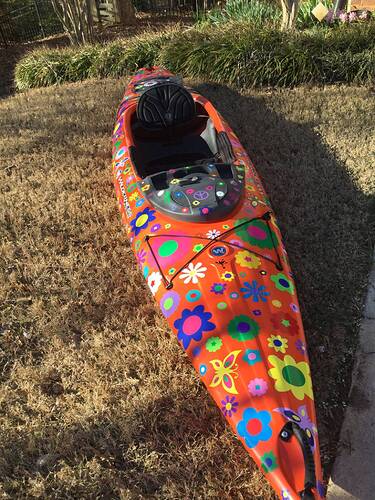 I leave the hatch covers partly off when the kayak is stored even though I live in a fairly dry climate. If bugs and vermin are a concern (storing it outdoors or on the floor), you could bungie some cheesecloth or mesh screen over the hatch openings and the cockpit.

@roanguy said:
If Jack L was still on he could show you how to make a deck mounted GPS holder that bungees to your deck lines for easy installation and removal

It’s in the archives: https://forums.paddling.com/discussion/1108678/gps-mount-query
But the photo links don’t work anymore. Andy made one; maybe he still has a picture.

I made a GPS holder that attached magnetically to a mating plate on the front deck. I no longer use this, as I’ve switched to using mostly a chart and compass for navigation, with occasional checks on my phone’s GPS. I still keep the handheld dedicated GPS with me on longer trips, but usually stowed away in a hatch as a back up.

The holder I made consisted of a RAM Mount holder for the Magellan Explorist 500 (mostly waterproof), plus the base that’s supposed to be stuck to something with two-sided foam tape. Instead of the two sided tape, I made up a plastic disc that had three neodymium magnets inside and glued the mount to this disc using some kind of adhesive I don’t recall at the moment. A second disc of the same construction was adhered to the (composite, gel coat) kayak deck using clear silicone. It stayed on for about two years before popping off one day. It did leave some discolouration as well, but not that noticeable.

I would tether the GPS to a deck line via the lanyard, so that when I accidentally whacked it with my paddle (which I did with annoying frequency) it just fell to the side of the boat rather than the bottom of the lake/river.

Although I’m telling you about this, I’ll strongly advocate AGAINST getting too comfortable with GPS “moving map” navigation on the water. It is way too easy to become reliant on it, whether you admit it to yourself or not. Just when you’re really going to need to know where you are, your batteries are going to die or some other technical failure will happen. Just ask Murphy.

Thanks guys. I’m just going to decal the deck then. Or maybe just get use to the color and do nothing. I’m also changing my mind on the GPS and sort of want something handheld thats waterproof and can tether to a PFD and slide into a pocket etc.

I had bungee corded some old tshirts over my hatches and pulled them tight enough that they would allow the most airflow. And I’ll remember the bleach suggestion. 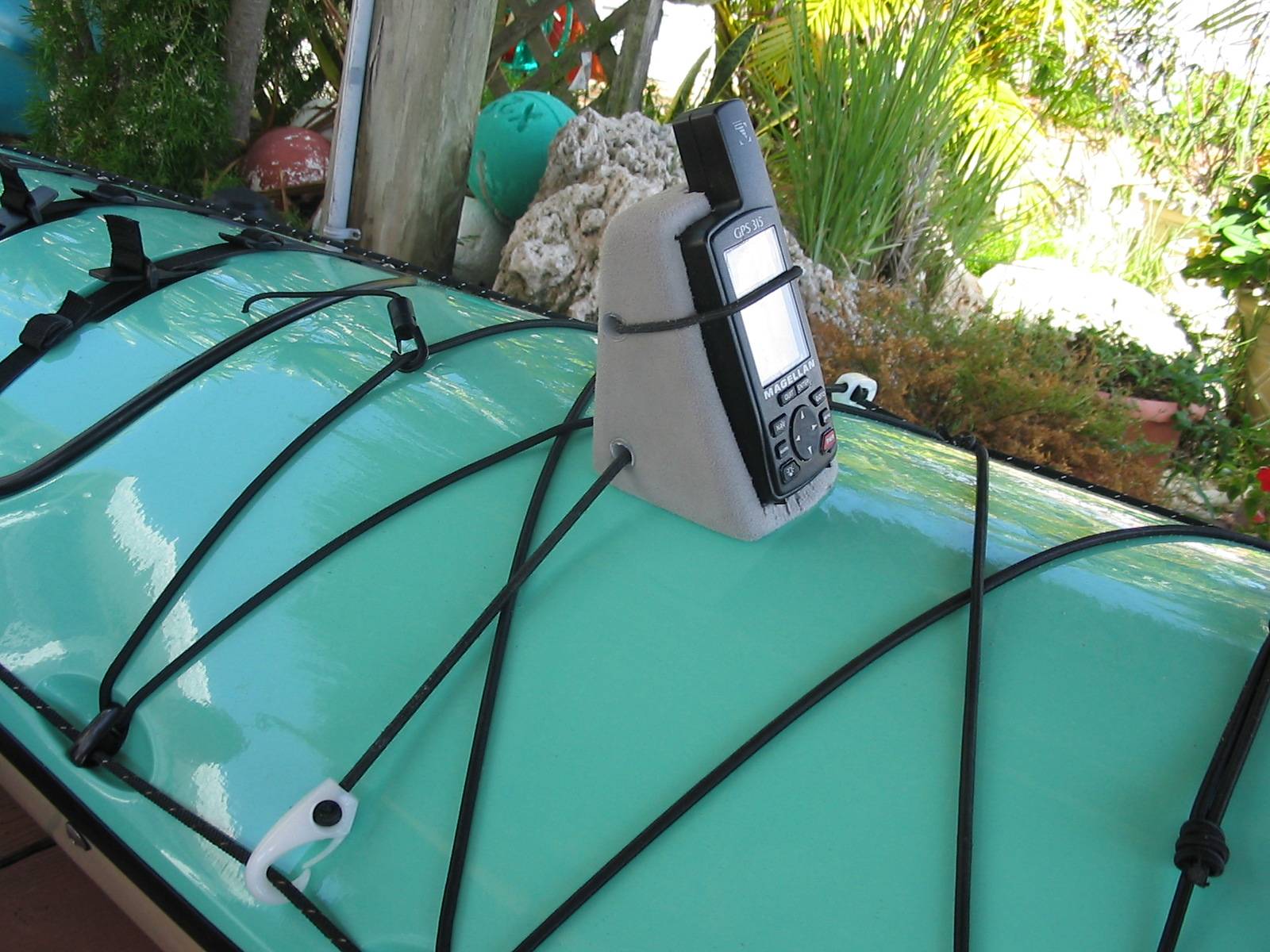 @roanguy said:
If Jack L was still on he could show you how to make a deck mounted GPS holder that bungees to your deck lines for easy installation and removal

This holder is similar to JackL’s.
Made from minicell foam.

Re #1-- because of the materials of a plastic boat, the resins work their way to the surface which causes the paint to separate. You CAN paint your boat but it only lasts a season or two before you need to redo it.

#2-- vent your bulkhead. This will aloe your dry-hatch to breathe.
I take a straw from an air can or WD-40 can, point the end and push it through the bulkhead near the top of the bulkhead near the top deck. Then I shit it off flush.
This gives an air-vent too small for water to flow through but allows the hatch to vent and equalize pressure and keep the inside dry.
Unless you fill the cockpit with water AND open the hatch cover, you won’t have any problems.

#3-- I did this with my GPS and the sun fried my screen.
If you insist on mounting the GPS on your deck, use bling rivets or a rubber washer or even a dab of silicon seal to keep it waterproof. Then figure out a way to shade the screen.

#1a-- BTW, if you want to trash your boat withy bumper stickers or the like (the USCG will give you an ID sticker free), use vinyl stickers and not the normal ones for autos. 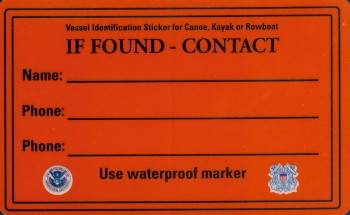 I’ve used plasti-dip to “paint” a glass surf boat. If you don’t like it, or when it gets torn up, you can peel it off. 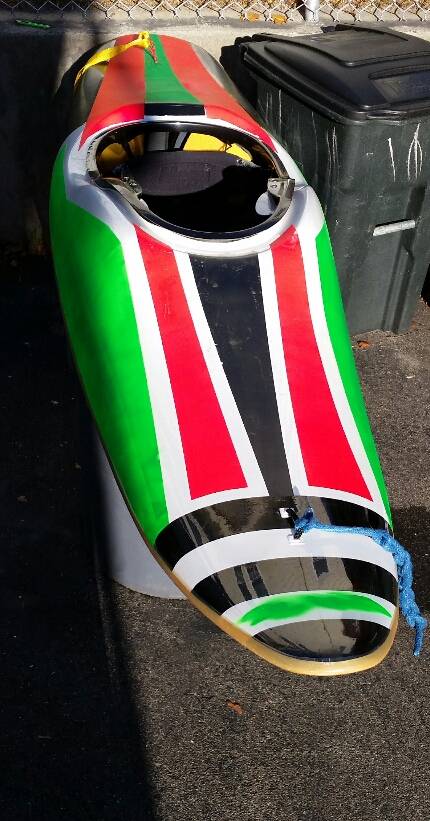